Nix Is On-Trend, But All Over the Map

Share All sharing options for: Nix Is On-Trend, But All Over the Map

I have a longstanding rule of restaurant recommendations: Unless vegetarians have qualms about patronizing institutions that contribute to the slaughter of animals, I refrain from sending them to strictly meatless restaurants. (For my carnivores, a parallel policy: I rarely send them to the narrow-minded institution known as the steakhouse.)

When my vegetarian friends ask for dining advice I send them to American spots like Hearth, for hen of the woods mushrooms and gnocchi, or to to nouveau-Indian spots like Babu Ji for their bright yellow Punjabi curries. I send them to creative pizza spots like Roberta's and Pasquale Jones, to Semilla for vegetable-heavy tastings, to Del Posto for their vegan tasting menu. I send them all to the same delicious restaurants at which I often eat, restaurants where they can remain closer to the center of the culinary conversation, where they can push back against meat-oriented chefs with specific requests, where they can convince their more omnivorous companions to order one fewer pork dish for the table.

Not every restaurant has to be inclusive of every demographic and dietary concern. But the meat-free institution, at least in its modern American iteration, is seeing its relevance threatened as mainstream food culture increasingly takes its cues from the plant-based lifestyle — without completely kowtowing to it. Some of the most celebrated vegetable dishes right now are served at "regular" restaurants: the grain bowls, the avocado toasts, the brown butter and squash carpaccios.

That's not to be dismissive of dedicated vegetarian (or vegan) venues — Superiority Burger made the veggie burger just as much an object of desire among the city's culinary cognoscenti as a trendy lamb burger. And I bet even a committed beef eater could spend years happily subsisting on the diverse lacto-vegetarian dishes of India's western state of Gujarat, not to mention of the world's other meat-free cuisines, where adding animal proteins would feel like an absurd accommodation, rather than the other way around. Vegetarian restaurants don't have to feel "vegetarian." But Nix, the third New York restaurant opened by chef John Fraser, a restaurant that shares a name with a very specific hair-care product, feels and tastes like a restaurant that's more conscious of dietary restrictions than it is of good taste.

Brown rice stir-fry with chanterelles, ramps, and a farm egg has about as much depth of flavor as middle-of-the-road takeout.

The venue, in Greenwich Village on University Place, is everything you might expect from a 2016 restaurant opening: It's exceedingly noisy, and filled with pretty people in fancy t-shirts picking at small plates. The room is pure summer, with white painted brick, ceiling fans, hard floors, soft banquettes, and tables without cloths. Did I mention it's noisy in here? Let me say it again, in case you couldn't hear me.

On a Thursday evening, my companion is drinking a cocktail that looks like a children's birthday cake: the Playa, a pink mix of tequila and watermelon underneath a tranche of musky Champagne foam. He finishes it and promptly orders another. Our food arrives — fragrant steam, heady with cumin, rises out of a portion of polychromatic carrots served en papillote with soft bulgur. Too bad the roots are nearly raw; they pack a gritty, al dente crunch that's as hard on a knife at it is on the teeth.

Another night, I order a plate of juicy toybox melon with cottage cheese and olive oil. While Fraser deserves credit for bringing these curds out of the culinary shadows of the 1980s, this preparation evokes a late night refrigerator raid. And then there are the jerk cucumbers, a presentation of the fresh vegetable sitting in a muddy pool of tamarind-, clove-, and habanero-spiced water. The flavor is that of an unintentionally uncooked marinade, harsh flavors untamed by heat and smoke. This mistake costs $15.

This does not bode well for the rest of the meal. 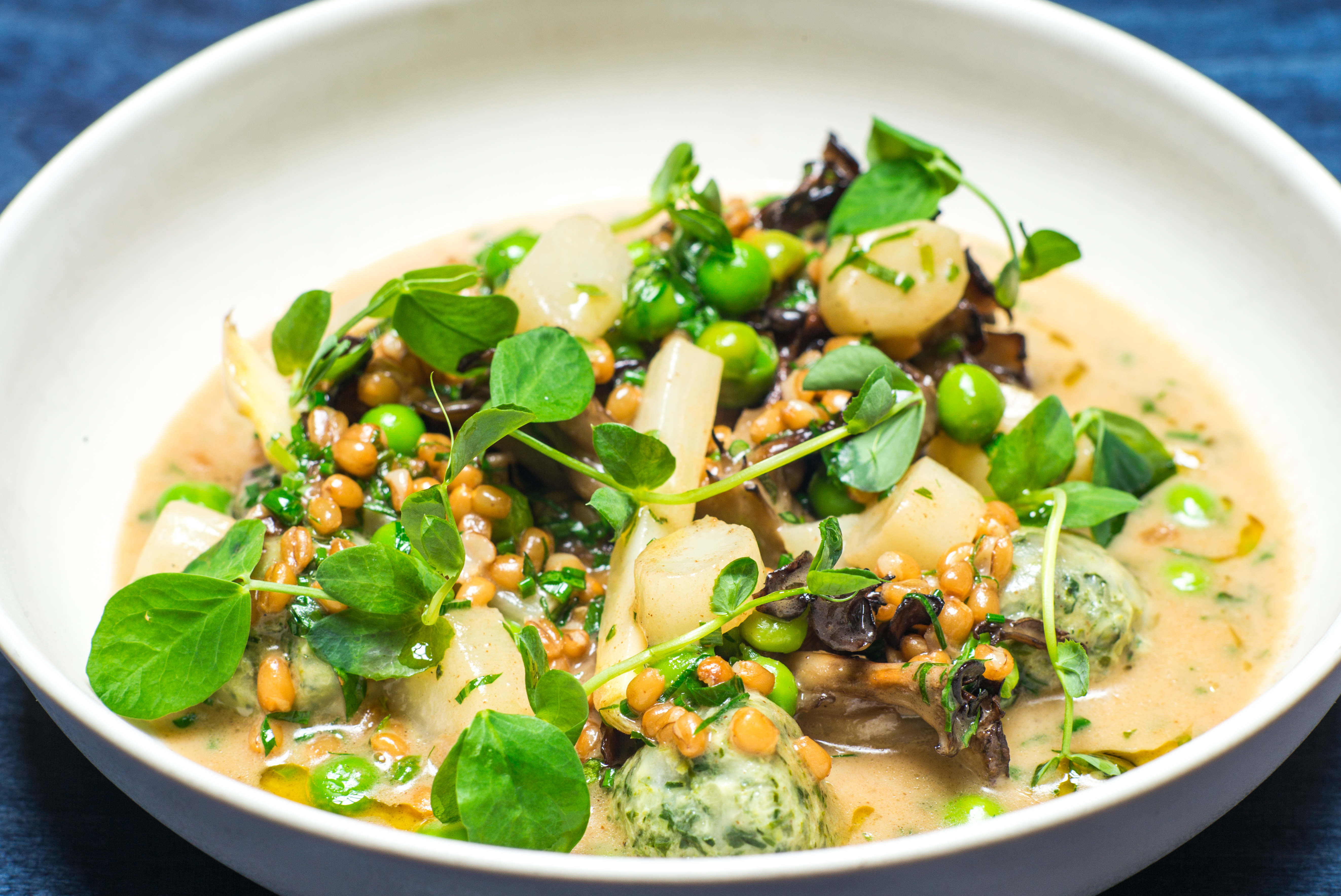 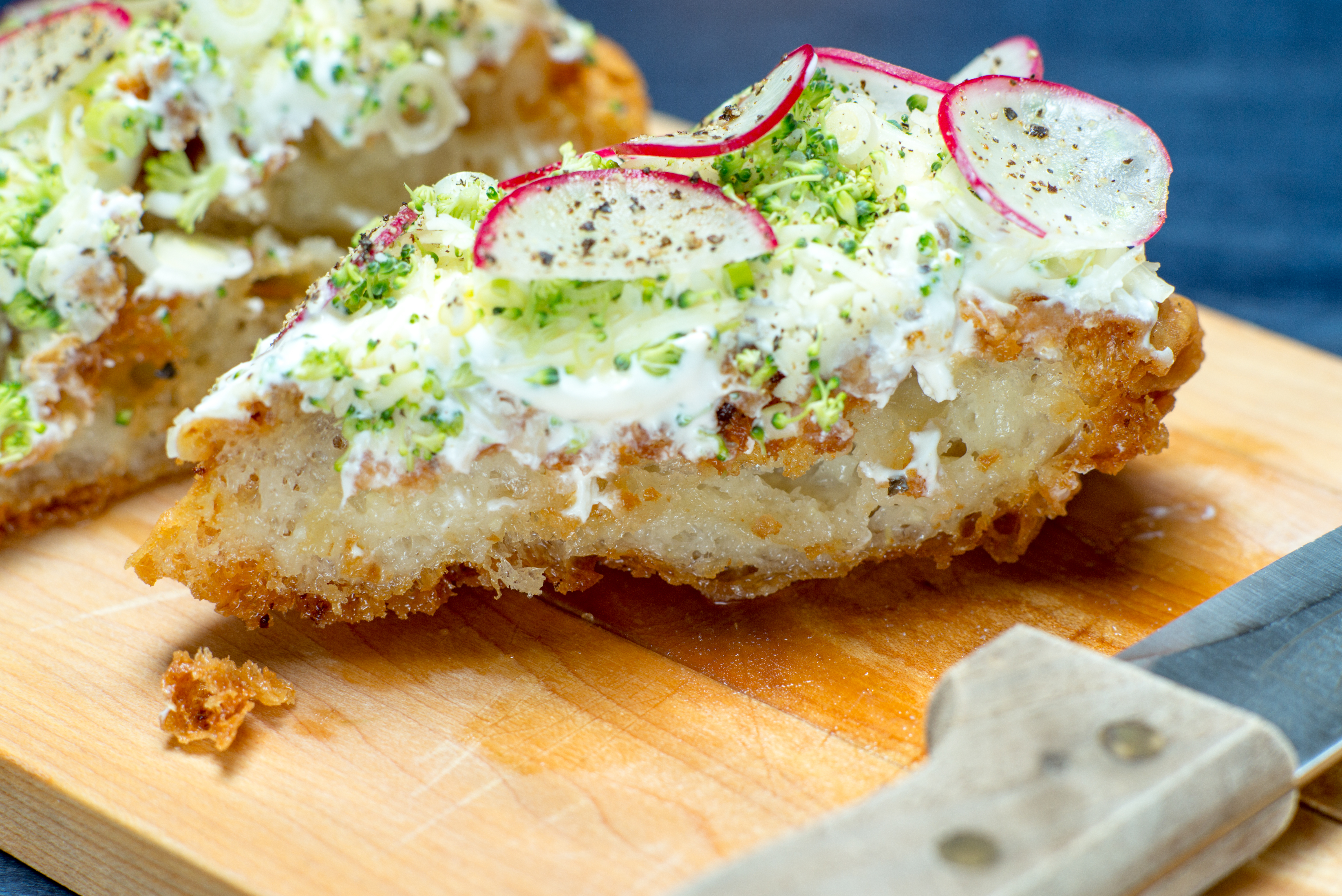 Our attitudes towards vegetables have evolved over the past decade. No substitutions or special requests was the operative mantra at David Chang's Ssäm Bar and Noodle Bar in the late aughts, a caveat subtly directed at diners who wanted their Brussels sprouts without fish sauce or bacon. Think about how that must have felt if you were a vegetarian who cared about food: One of the country's most important young chefs was making a point of keeping you out. Now, the menus at Momofuku restaurants read "vegetarian options available on request."

Gwyneth Paltrow thrusted vegenaise into the American lexicon. Americans are flying to California to dine at Manresa and Meadowood, restaurants more famous for their bespoke farms and arcane herbs and fruits than their caviar. The current French destination restaurant of choice in Paris is l'Arpège, a venue that charges about $400 for a tasting of vegetables. It almost feels as if the disappearing "offal" sections of menus that pervaded New York in the mid-to-late aughts are being replaced with subheads like Greens, Grains, and From the Market.

Fragrant steam, heady with cumin, rises out of a portion of poly­chrom­atic carrots served en papillote with soft bulgur.

John Fraser helped turn the societal tide away from blood and guts as early as 2010, when he launched at Dovetail, his first restaurant, a then-novel endeavor called Meatless Mondays, an homage to the early twentieth-century policy of carnivorous abstention in support of the war effort. At Fraser's second restaurant, Narcissa, the produce-forward theme continued, with entrees like carrots wellington served alongside wood-fired steaks.

Nix, which opened in February, is right on message for Fraser, an entirely meat-free restaurant that's a logical extension of the vegetable-centric culinary ethos that he's played a role in creating. But the restaurant's existence nonetheless prompts a few obvious questions: Now that vegetables play a star role, rather than a supporting one, at our country's most in-vogue restaurants, what does Nix bring to our culinary world with its omission of meat? What does it do better than Dovetail or Narcissa by tying one hand behind its back? Does it serve any must-try dishes?

Brown rice stir-fry with chanterelles, ramps, and a farm egg has about as much depth of flavor as middle-of-the-road takeout. A $25 order of pea dumplings turns out to be just four dense, green-and-white gnocchi, along with a giant pile of maitakes and white asparagus drenched in a rich enough butter sauce to make you wonder whether Fraser thinks this isn't July but January. (Fraser's menu changes regularly; the version of this dish currently on the menu identifies it as potato gnocchi with peas, served with summer squash.) Charred green asparagus with morels suffers from the same problem; the dish is more a study in cream than it is anything else — and the torn green-onion crepes mixed in are portioned more miserly than noodles in a poorly-scooped bowl of soup. And if you're overwhelmed by all the air conditioning this summer, Fraser has yet another anti-seasonal riff on cacio e pepe, with shiitakes and polenta. Yawn.

How about some Yukon Gold fry bread? The burnished mahogany exterior, oblong shape, and chive-laced sour cream topping (the menu describes it as "highly decorated") is visually a dead ringer for a loaded baked potato, one of the greatest U.S. contributions to global gastronomy, and improves upon it further, turning it into a light-as-air bread course. At least, it does on certain visits. On other nights it's a wet, greasy, under-salted sponge.

Think about how that must have felt if you were vegetarian: One of the country's most important young chefs was making a point of keeping you out.

In the mood for gobi Manchurian, the sweet-spicy sino-subcontinental dish that Babu Ji re-popularized for a larger New York audience as "Colonel Tso's cauliflower"? Fraser runs even further with the dish's Chinese origins here — despite calling it "tempura cauliflower" on the menu — presenting the deep fried, chile-laced, tomato-slicked cauliflower as a crimson filling meant for stuffing inside steamed buns. Sounds great, right? But the cauliflower lacks the true interplay of heat, crunch, and tang that makes this dish, at its best, feel like an axiomatic vegan argument against General Tso's chicken. Even worse: the vegetable itself boasts the flavor of styrofoam.

A better bet, if your friends drag you here, is the gently baked tandoor bread sprinkled with za'atar. A slew of dips are available to order alongside; avoid the saccharine eggplant and the hummus that tastes like all tahini and no chickpea, and opt instead for the smashed avocado — the $4 charge is quite reasonable in this era of $12 guacamole.

Then go ahead and make a meal out of small plates: crisp jicama ribbons with blood orange and Fresno chiles, egg salad with incendiary habanero cream and needle-thin potato crisps (imagine deviled eggs with texture), and a whole plancha-seared avocado served in tart tomato water, with the exterior of the fruit boasting the type of sublime char and bitterness one might expect from a Michelin-starred Sichuan chef. There's the Fraser we want, even though the dish contains, for no compelling reason, mozzarella.

Dessert is just as inconsistent. Maple custard is a fine study in how to rely on the syrup for aroma rather than sweetness, but then you bite into a vegan chocolate cake that takes like a pastry cook accidentally refrigerated the batter and then forgot to cook it.

Ryan Sutton is Eater New York's chief restaurant critic. See all his reviews in the archive.