Share All sharing options for: You'll Get Great Wine at Pasquale Jones — With a Side of Pizza

Review and information for Pasquale Jones

To a certain degree, the glass makes the wine. When you drink out of a clunky flute, you end up sensing the flaws of cumbersome glassware more than the complexities of good Champagne. But take a high-end stem — a Zalto, for example. At just over half the weight of an iPhone, you barely notice it in your hand. The lip rests against your mouth with all the heaviness of a doily. And the bowl, which looks thinner than gossamer, boasts sufficient magical aromatic properties to make a bottle of Blue Moon drink like one of the world's most fragrant beers. The extravagant cost of each stem (about $60) keeps glasses of this quality confined, for the most part, to the country's priciest establishments. And yet, when you're led to your table at Pasquale Jones, a damn good Neapolitan-style pizzeria in Nolita, there's a Zalto waiting at each place setting.

The kitchen sends out your clam pie, and right away you know that this one makes the famous Franny's version feel like amateur hour. The nickel-sized mollusks float in just enough cream to recall the last few sips of bowl of clam chowder, but not so much as to turn the crust soggy. Wisps of broccoli rabe, doing their best impression of seaweed, are strewn about, providing a gently bitter counterpoint to all the salt and fat. You eat this quickly, then reset the palate with a $28 glass of Bereche bubbly that's so tangy and light in your Zalto that it feels as if you're using a pencil sketch of a glass to drink a cumulus cloud.

This restaurant, the brainchild of Robert Bohr, Grant Reynolds, and Ryan Hardy, the guys behind Charlie Bird in the West Village, might be the city's poshest pizzeria. You'll find ramp pies, service-included prices that aren't sky-high, vintage Dom Perignon, custom-built Stefano Ferrara wood ovens, $125 rib steaks cooked by a chef who wears an Apple Watch, and a dining room full of strapless, backless, bare-shouldered patrons who look like glossy cut outs from the pages of Vogue. A bespoke floral arrangement flanks the south side of the dining room, and an artful arrangement of rhododendrons liven up a loo that's decked out with Jo Malone candles, Aesop hand soaps, and fruit-flavored Tootsie Rolls.

Some critics might deride all this as yet another sign that even the pizzeria — that humblest of New York institutions — is not immune to the allure of making things a little bit fancier, a smidge pricier, a touch more out-of-touch. And perhaps there's an element of truth to that. But there's also a larger element of democracy at play here at Pasquale Jones, and I'm not even talking about the Tootsie Rolls. 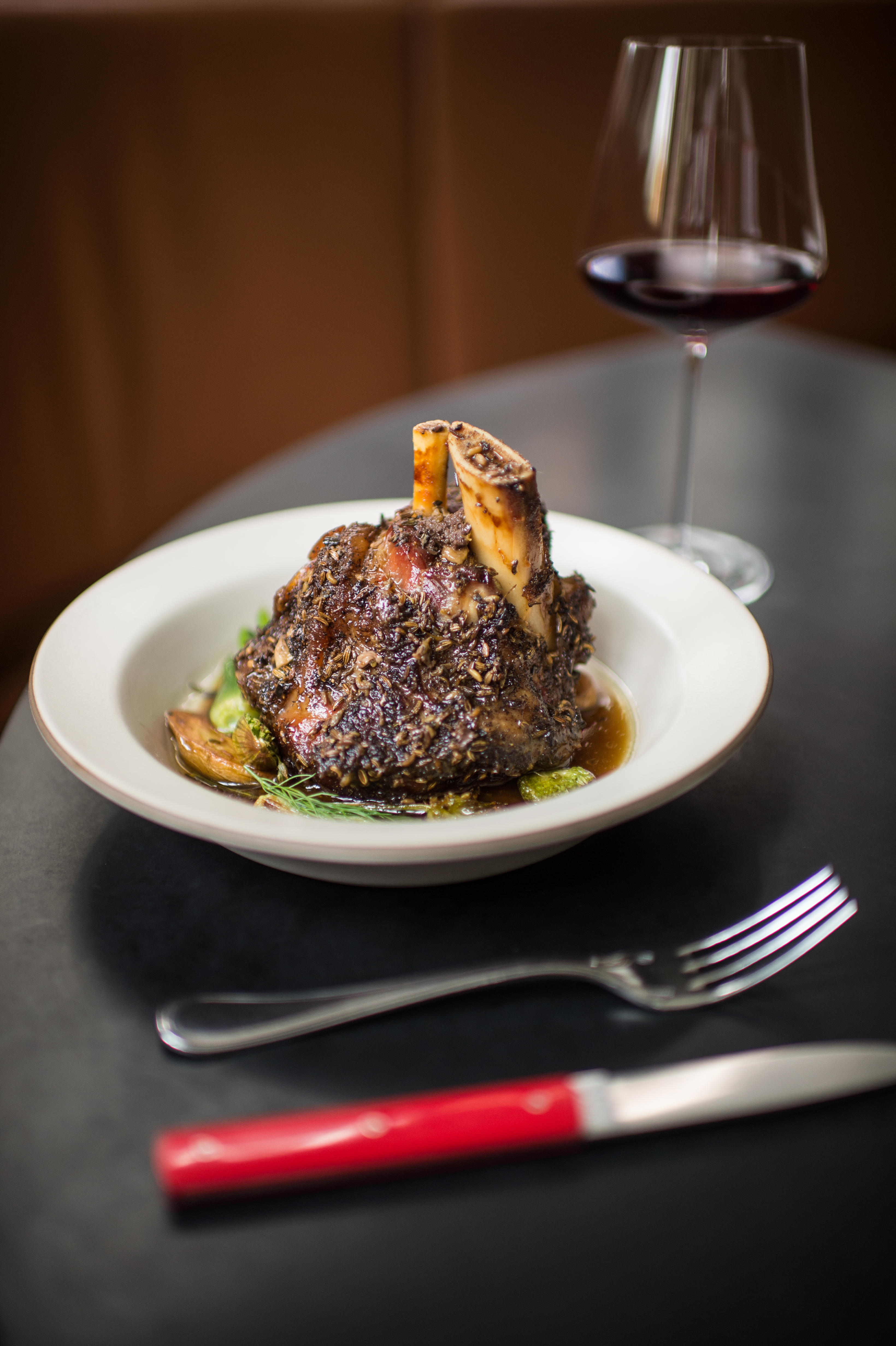 Canonically, ordering beer or wine with pizza at a slice joint will always involve Miller Lite in a plastic cup or California chardonnay in a screwtop mini-bottle. And it was only the not-too-distant past when imbibing at a nouveau-Neapolitan sit-down spot meant cheap Chianti splashed into a stubby tumbler, or a short-stemmed break-proof glass from the restaurant supply store filled to the top to punish any potential swirlers with a stained shirt. But right now in New York, both pizza and wine have grown up, and at pizzerias like Marta and Roberta's, thin-lipped glassware — not to mention funky biodynamic wines or deep selections of grower Champagne — is more common than not.

The waiters in denim shirts at Pasquale Jones are changing the way pizza-eaters drink by using the pies to get us in the door, and exposing us to wines we've never heard of.

The importance of these wine lists can't be understated: They expose their restaurant's diners to wines they might not otherwise encounter, the sort of thing you might only otherwise expect to find at Michelin-starred French spots or trendy small plates places with pedigreed chefs. But now, you can get them with pizza. If you're taking the financial leap to sample a skin-contract orange wine for the first time — perhaps a Fontanasanta Manzoni Bianco, a luscious cross between a pinot bianco and a riesling — do you want it paired with an avant-garde creation with foams and flowers? Or do you want it paired with a pork and onion pie at Pasquale Jones?

I'll tell you this: You want it with the pork and onion pie. Chef Hardy does just that for you, piling heady jowl and stinky pecorino over a tomatoey crust for a flatbread take on the classic Roman Amatriciana. But here's what's even better: Pasquale doubles down on that emerging great-wine-for-everyone ethos with a plan to lure in both the snobs and the amateurs by serving their pizza-friendly vino in some of the world's best glasses — but also by making it ultra accessible, with any of the non-sparkling "seasonal" wines (of which there are 56, none over $75) available by the half-bottle for half the list price. That's a rare and generous policy, one that translates into a path to sampling that Manzoni for as little as $35.

The obvious benefit is to the diner's wallet, but there's something more important going on here: Pasquale is lowering the barrier to entry to trying an off-the-beaten track wine not just from a financial perspective but from a consumptive perspective. Just as a chef has more opportunities to try and fail with experimental dishes over a long tasting menu, rather than having to play it safe over a four-course meal (where, due to the limited scope, each course has to knock it out of the park), an aggressive half bottle program encourages diners to take more risks while drinking.

This all the more important during a pizza meal, which tends to run shorter than other dinners. A party of two, who'll maybe only typically order a single bottle of Nebbiolo over their 90-minute dinner, can at Pasquale Jones now double their variety and take a chance on two 375ml experiments, opening their palates to wines perhaps too rare or edgy for a restaurant to open up and move by the glass.

Maybe I'm diving too far deep into the behavioral microeconomics of pizza pairings. But as much as the sports-jacketed sommeliers at tasting menu venues are changing the way fine-diners drink by expanding wine pairings to include sherries, sakes, beers, cocktails, and mocktails, the waiters in denim shirts at Pasquale are changing the way pizza-eaters drink by using the pies to get us in the door, and exposing us to wines we've never heard of. 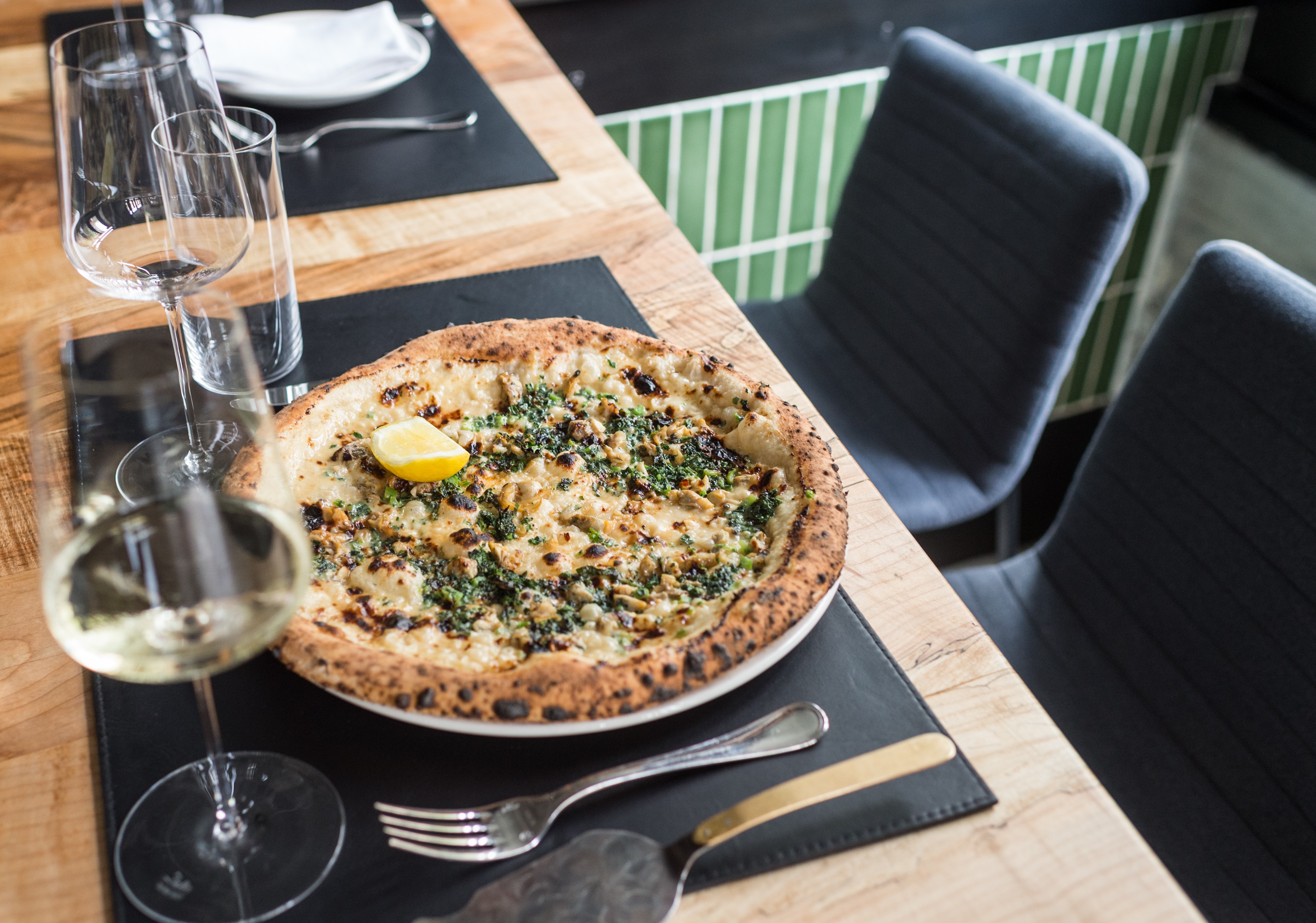 As dining rooms throughout the city cut back on amenities to keep prices reasonable amid rising labor and real estate costs, Pasquale counts itself among the rare non-exorbitant restaurant to keep your back straight and your posterior padded. It's comfortable — not an adjective one usually associates with pizza parlors.

Bar stools and banquettes boast lumbar support. Temperature levels remain bearable, even for those seated in front of the wood-burning ovens. Sound levels are never quite as ear piercing as one might expect at such a hip venue (Charlie Bird's decibel levels were brutal in its early pre-soundproofing days). Those scented candles in the bathroom? They're a reprieve from the woodsmoke gently perfuming the dining room. Hosts check your bags without giving you a ticket; they remember who you are. About a third of the dining room is available for booking via Resy, and if that's how you roll, you'd best log on to the app a good two weeks out, when seats are released. The rest of us will wait about 60-90 minutes as walk-ins.

Ryan Hardy crafts his pies in the New York Neapolitan style, no soupy centers or droopy crusts. Nearly every version is perfect.

The wait is worth it. Ryan Hardy crafts his pies in the New York Neapolitan style, which means no soupy centers or droopy crusts. Nearly every version is perfect, from the brilliant clam and amatriciana pizzas to the margherita pie, whose tomatoes exude aromas that veer from sweet and easygoing to vegetal and tangy. The spicy salami pizza is the requisite pepperoni riff, with the clutch inclusion of Calabrian chiles. They look like chopped up cherry bombs and impart the pie with the type of deeply funky flavor one might expect if a farmer were to water his vegetables with lamb broth. Match that with a half bottle of Vignai Da Duline Schioppettino, with its reserved dark fruit notes, and you've got yourself a nice segue to the mammoth pork shank for two, a mound of achingly rich, fall-apart swine.

The precision of Hardy's non-pizza kitchen doesn't quite approach the wonder of his pizzas, technically or creatively, but the fare is enjoyable enough. The pea salad with ricotta is fresh and bright, steelhead crudo shows off the oils of good trout, a dish of braised leeks with walnuts and parmesan packs about as much flavor as a decent delivery salad. Pastas are distinctly average, from the gritty, overcooked, undersalted Roman gnocchi, to porchetta agnolotti, which takes two powerful flavors — black garlic and braised pork — and somehow makes them almost unnoticeable. Chicken is overcooked, and tilefish is a study in how to drown delicate maritime flesh with too much olive oil. It's as if Hardy's approach to non-pizza cuisine is to create a subdued canvas that won't get in the way of the wine, which universally has far more personality.

Pasquale Jones doesn't have a pastry chef and it shows; the single sleepy dessert on offer (which changes regularly) evokes the phoned-in confections that David Chang used to serve at Ssam Bar in the pre-Christina Tosi era. On one of my visits, Hardy warmed up strawberries in the oven and topped them with mascarpone gelato; at a later meal, he served the fruit raw with that same frozen treat and a splash of elderflower syrup. It tastes fine — only a human with an iron heart would turn down a sundae — but it would be nice if a restaurant of this ambition served something that I couldn't put together at home in under a minute.

But it's a small complaint. Perhaps forgoing a dedicated sweets chef is a reasonable enough tradeoff for a restaurant that strives to stay affordable while offering so many other luxuries. And despite no-tipping setbacks at other casual restaurants, the team behind the restaurant tells me the hospitality-included policy is working out just fine here. Right on.

Ryan Sutton is Eater New York's chief restaurant critic. See all his reviews in the archive.

What to drink: Wine by the half bottle. Communicate your taste preferences and budget to the wait staff and you’ll be happy with the result.

Bonus tip: Don’t be discouraged by the dearth of reservations on Resy; most of the dining room is reserved for walk-ins. Expect waits up to 90 minutes during prime time, and up to a half hour in the 10pm hour.

Our review of Pasquale Jones

What to drink: Wine by the half bottle. Communicate your taste preferences and budget to the wait staff and you’ll be happy with the result.

Bonus tip: Don’t be discouraged by the dearth of reservations on Resy; most of the dining room is reserved for walk-ins. Expect waits up to 90 minutes during prime time, and up to a half hour in the 10pm hour.