Going Down Under: A Visit to Manhattan’s Only Outback Steakhouse

Share All sharing options for: Going Down Under: A Visit to Manhattan’s Only Outback Steakhouse

New York City is missing some of the country’s most prominent fast food, casual, and fast-casual chains. We don’t have a Sonic Drive-In for example; no Carl’s Jr. or Hardee's; no In-N-Out, Jack In the Box, Cracker Barrel, Golden Corral, Texas Roadhouse, or Cheesecake Factory — though one is imminent in a Queens shopping mall. Other chains have only a trace representation, as if offering us only a taste. In that category find Red Lobster, Red Robin, Chick-fil-A, Denny’s, and Outback Steakhouse.

We’ve been seeing lots of Outback Steakhouse commercials on TV lately, even though we only have one branch in Manhattan on West 23rd Street. We’ve learned that "No Worries Wednesdays" offers a three-course meal for $12.99; that "Outback Throwback" would result in prices being reduced to what they were when the chain was founded in 1988; and that the signature sirloin is constantly being discounted, as a Land Rover skids along a crescent beach and mountains rise in the background. Are steakhouses a thing in Australia, you wonder, like shrimp on the barbie, rugby, and big cans of beer?

Then there’s that guy with the fakey accent babbling on the commercials. Most New Yorkers have never been to Australia, but we know that’s not how Aussies talk. In fact, a little research reveals that Outback Steakhouse was founded in Tampa, Florida —about as far from Australia as you can get. It now has 950 branches in 23 countries. There are exactly four in Australia, and one nearby in Indonesia. 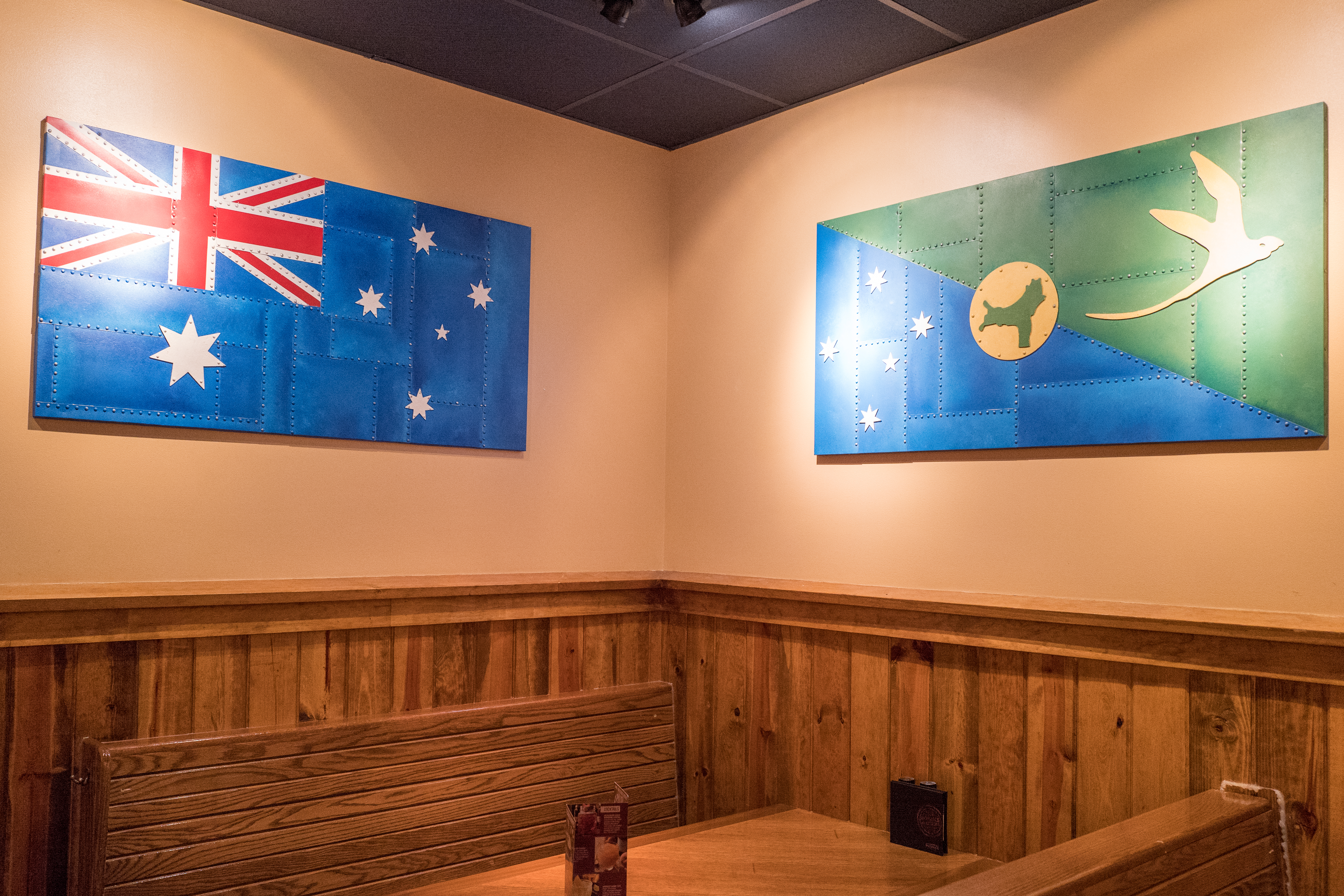 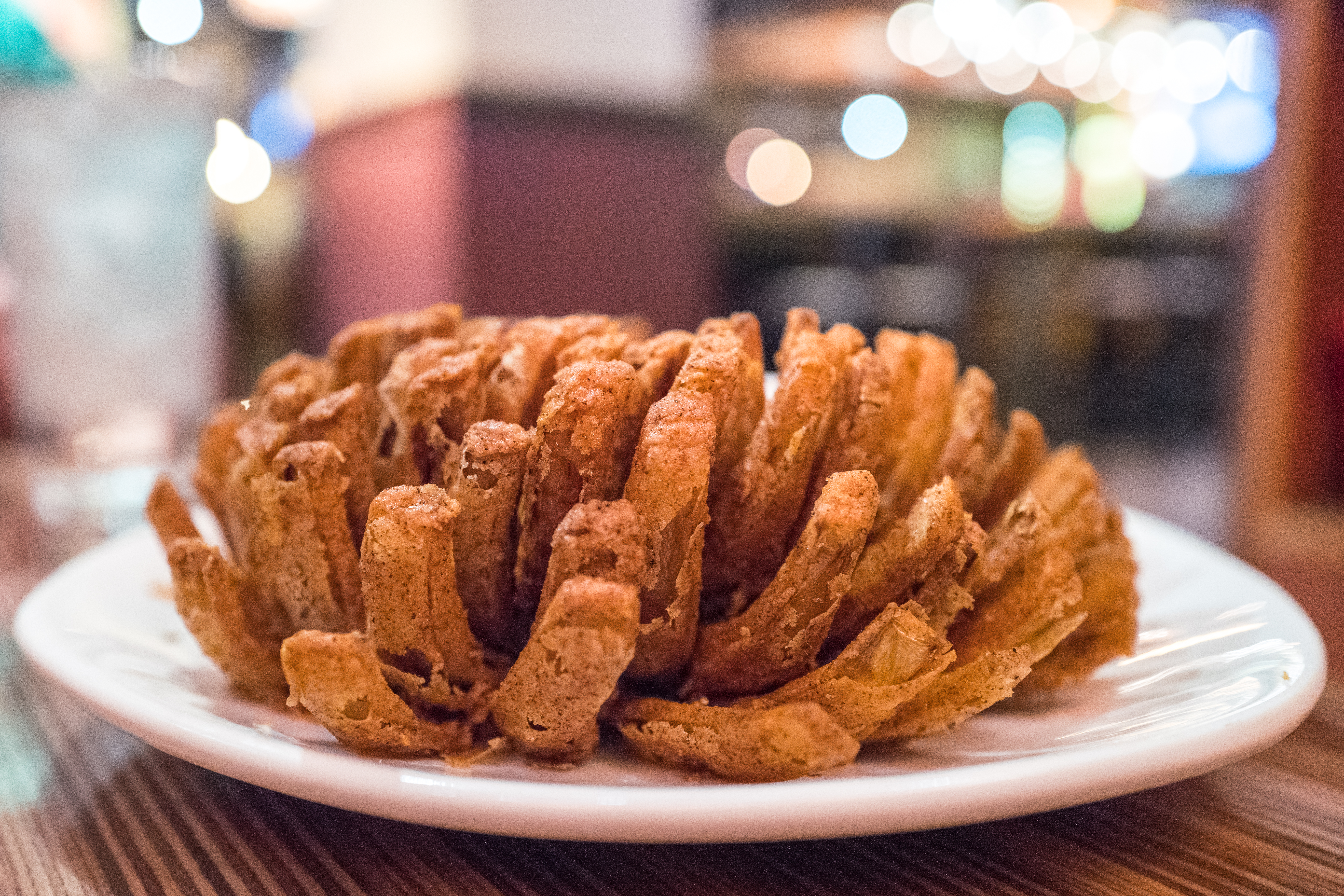 Well, the commercials must have worked, because they kindled in meat expert Nick Solares and me a desire to see what the hype was all about. Thus we descended one lovely spring afternoon on our hometown branch, located next to a rare Home Depot and around the corner from an Olive Garden, making us wonder what it is about Chelsea that attracts these chains. The place is hulking, comprising a pair of rooms seating perhaps 140.

Finished in stylish lath and less-stylish stucco — building materials undoubtedly popular in Australia — the barroom boasts two concentric rings of seating at raised tables, plus stools along a horseshoe bar. The dining room is deeper and decorated with a print of kangaroos and not much else. So much for the Australian theme. 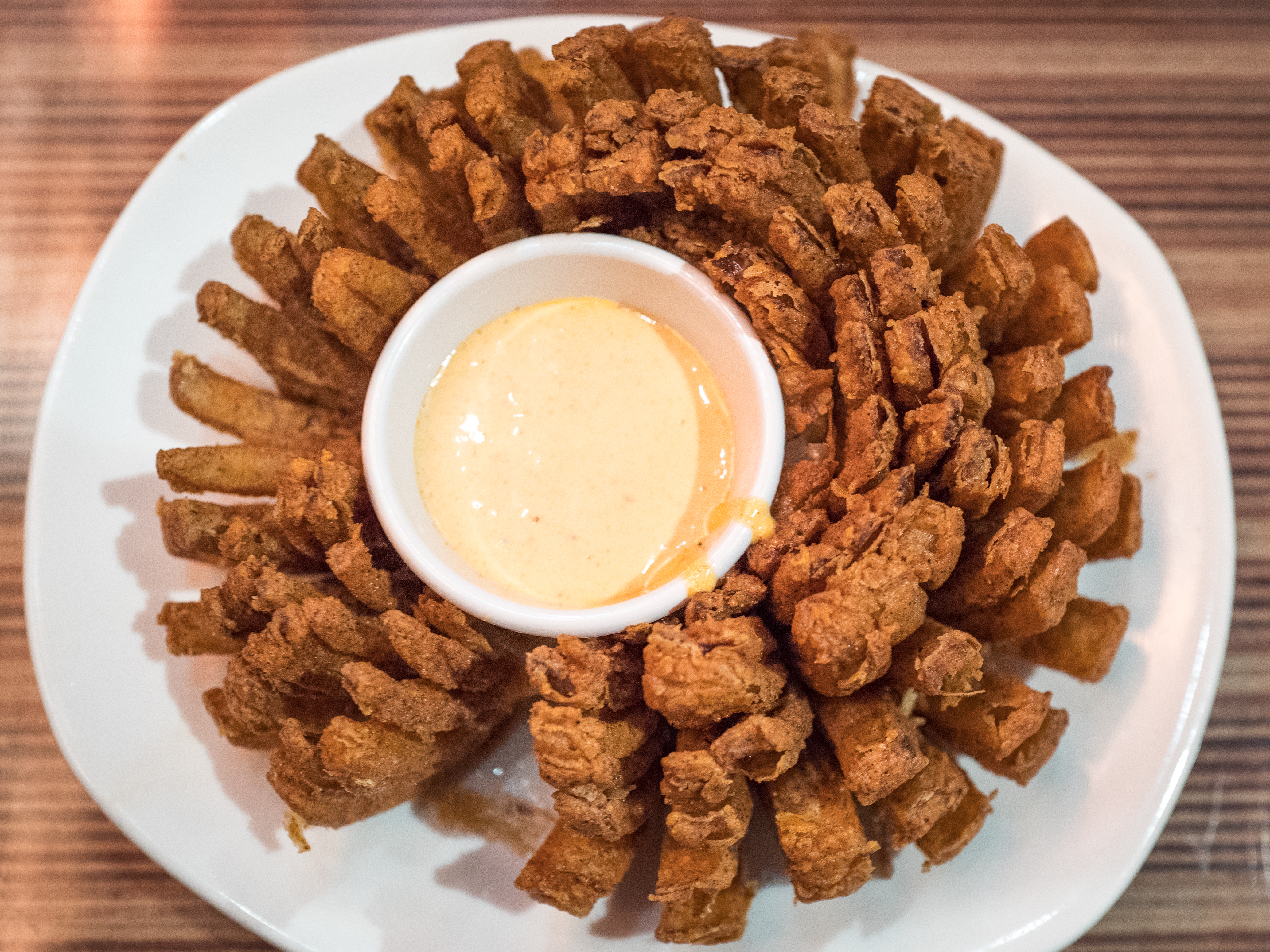 Naturally, as we sat down in the light-filled front of the barroom, we had to try the famous Bloomin’ Onion. As with most things on the menu, it was represented several places on the bewildering fold-out menu, which had drop-out panels, too, causing us to fish around on the floor for cards as they slid out. The onion was listed first on the menu at $9.29 (and an astonishing 1948 calories), but elsewhere at the $7.97 "Throwback" price. It was variously described as "hand carved," "hand selected," and "cooked until golden."

It arrived splayed like a sunflower, with a cup of flavored mayo in the middle. Ours was overcooked to the point of almost being burned, and so sodden with fat that, as you picked up the petals they visibly dripped. "I can’t eat that!" Nick exclaimed — and neither of us is a grease-hater. Wikipedia points out that the dish is "almost" unknown in Australia. Despite its association with Outback, it was probably invented in New Jersey in the 1970s.

Above: Prime rib and Caesar salad. Below: Potato soup and sirloin with fries.

Outback's website is dedicated to showing how serious the team is about steak. But it's also extremely selective in the information it imparts. Solares explains how:

Aging: Outback claims steaks are aged until they reach optimal tenderness. What's not said is whether they are wet- or dry-aged. If steaks were dry-aged — a more expensive process that imparts a very different flavor — the menu would say so.

Inspection: Outback says its steaks are USDA-inspected — but all meat sold to American consumers is. Nowhere on its website or menu does it say whether the beef is domestic or imported, so it could as easily come from Uruguay, Argentina, or, perhaps ironically, Australia.

Grading: Outback makes no mention of the quality grade of its beef; this invariably means that it is not graded — a voluntary process that adds extra expense and is used primarily for marketing.

The steak: To describe its steaks, Outback uses terms that don't really mean anything: "Natural cut" is not a butchering term, and certainly not one that tells us anything about the meat's quality.

We’d gotten the impression that the place was a discount steakhouse based on the television ads, but once we flipped open the menu we discovered a scattering of luxury cuts at prices almost on par with actual steakhouses. Listed at various parts of the bill of fare were filet mignons, ribeyes (including one with cheese melted over it), boneless sirloins of several sizes, and prime rib, topping out at over $30, with a choice of potato and another side.

Being a prime rib fanatic, Solares went for that cut despite warnings from the waiter that you couldn’t get a well-done or medium-done slice until late in the afternoon. "That’s okay," Solares replied, "I like mine rare." And rare the 12 ounces of beef was when it arrived, oozing juices and looking perfectly fine. Unfortunately, the taste was off, with a strange funk that didn’t come from dry aging and a surface rub that tasted like Lawry’s Seasoning Salt. While we weren’t privy to the process by which the prime rib was created, I’d say it was probably chemically tenderized. Here's Nick's take on the steak:

Given the information we found out about the meat sourcing, it is not surprising that Robert Sietsema and I found the quality of the beef at Outback Steakhouse to be extremely unappealing. The signature sirloin was tender enough, but had an odd flaccidity, indicating that it was perhaps mechanically tenderized. It didn't have the robust mouthfeel of a good steak, and the dull, vaguely beefy flavor it imparted was coupled with a disconcerting sourness. The prime rib was even worse. We knew it would be under cooked as they warned us that it usually went on sale later in the day. But that wasn't the problem — I love rare and raw meat — it was that every bite was redolent with seasoning that tasted overwhelmingly artificial, and texturally it was mushy and flabby.

Indeed, though tender enough and cooked to order (medium rare), my nine-ounce sirloin was chalky and low on flavor, not so much a steak as a dry hockey puck of meat. It cost me $20.49. Unexpectedly, the Caesar salad was good, though not very anchovy-rich, while the potato soup could be rated completely acceptable. While the garlic mashed potatoes were infectiously tasty, the skin-on fries looked good but proved mealy and disgusting.

The restaurant was about one-quarter filled with customers for lunch on a weekday, and though the other diners seemed enthusiastic, they looked and talked like tourists, some even pulling suitcases. This dearth of customers may explain why Outback hasn’t hastened to build more branches in Manhattan — there’s really not much market here for bad Aussie-Floridian steaks.

Wiggle Around Town With These Colorful Boozy Jelly Cakes

Bangers and Mash Are Still Bangin’ at Tea & Sympathy