The Biggest Restaurant News Stories Of 2016

Eater takes a look back, from pokemania to the cheese-laden downfall of a vegan princess

Share All sharing options for: The Biggest Restaurant News Stories Of 2016

Big trends from the past — the rise of fast-casual, the obsession over food courts, now "food halls" — remained strong in 2016, but this year saw some new tides in the restaurant world, from the rise in mass quantities of raw fish for lunch, cake slices on milkshakes, and restaurants without dining rooms. As the year draws to a close, Eater looks back on the biggest (and craziest) news and trends that took hold over the last twelve months.

The dominance of poke

Poke has been a common dish in Hawaii for years, but 2016 was the year that it invaded New York City with a vengeance and was instantly popular. The dish that starts with cubed raw fish ended up being a natural evolution in a market where people really love sushi, have embraced fast-casual dining, and are smitten with meals served in bowls. People lined up for new brands. Places like Pokeworks, which opened earlier this year, are plotting expansions. Chef Lee Anne Wong, upset with the current offerings, started her own line of poke restaurants. Even non-poke focused restaurants like Cafe Boulud dabbled in the trend. Poke has made waves nationally, too, with new locations planned for existing restaurants and independent ones popping up all the time. In short, poke doesn’t show signs of a slowdown in New York City quite yet. 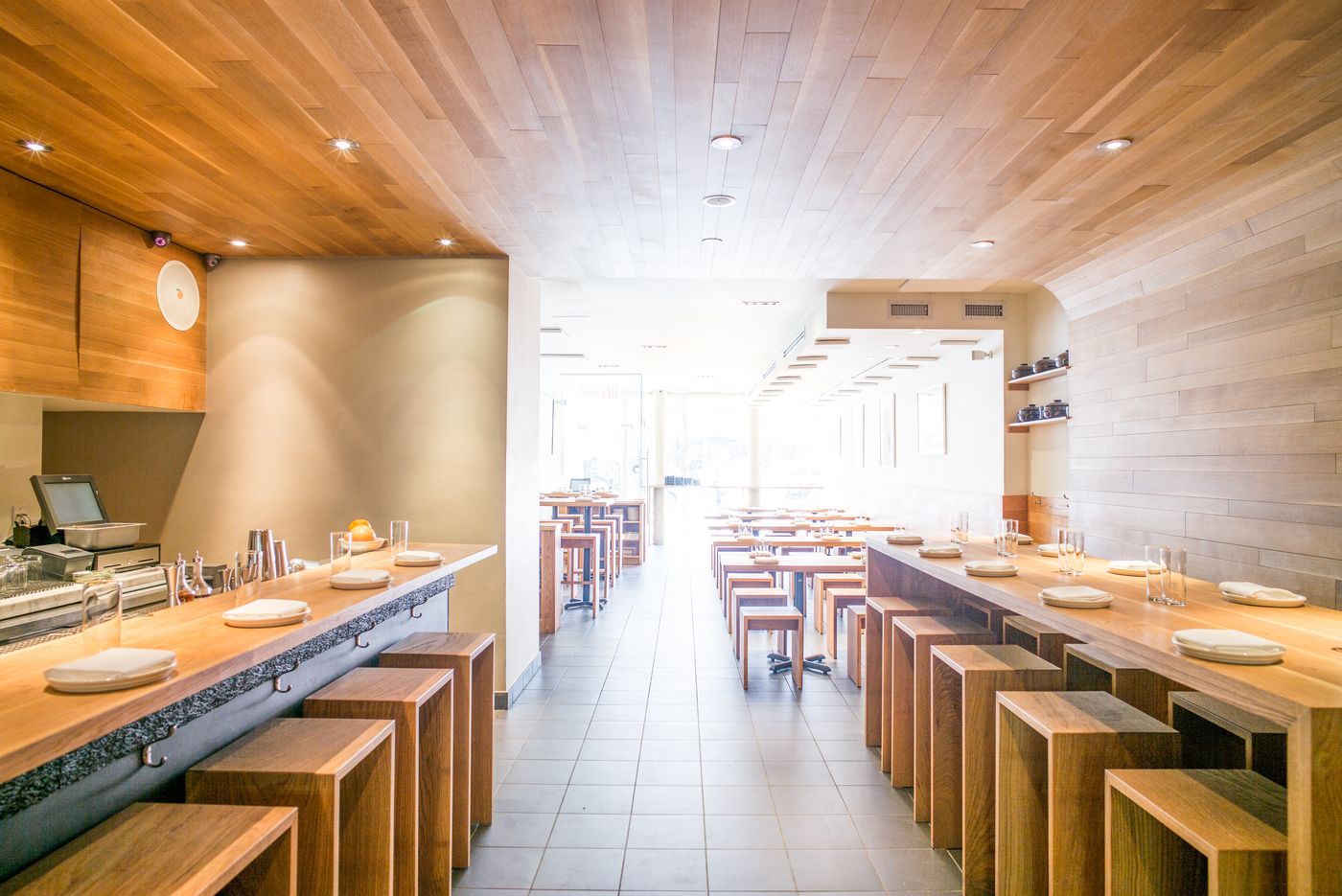 Love him or hate him, David Chang is one of the most influential chef/restaurateurs in the country, so when he opened Nishi in January, it was a big deal, as his first original, full-service restaurant in five years. Lines and waits were long, even in the dead of winter. But by March, things started to look bad for Chang. Eater critic Ryan Sutton filed a damning one-star review of the restaurant, calling it loud, uncomfortable and expensive. A couple of months later, Times critic Pete Wells found similar problems — a piece that Chang called "akin to a diagnosis of terminal cancer." Waits dialed back.

He made changes. He brought back tipping, which lowered the sticker price of menu items, and he added a lunch menu with trendier, more familiar dishes like poke buns and ramen. Then in July, Chang — who once scoffed at vegetarians — started serving the Impossible Burger, made from an entirely plant product-based "bleeding" meat. People started going to the restaurant in droves, specifically to get a taste of what was being dubbed the meat of the future. For a while, it looked like Nishi was a fake-meat-burger restaurant that happened to serve Korean/Italian food, instead of the other way around.

In October, Chang publicly admitted that he’d screwed up. "If anyone made a stupid mistake, it was me," the chef told Steve Cuozzo. "If I had to do [Nishi] over, I’d delay it and do it right." It’s not clear if Chang will make any more drastic changes to Nishi. But at least the chef will have another chance to do things right by New Yorkers. He’s planning to open his biggest restaurant yet in the South Street Seaport in 2017.

The marriage of tech and food in NYC

Silicon Valley’s culture of "disruption" hit New York’s restaurant industry hard this year. Some of it comes from a national level — for example, Seamless/GrubHub started hiring its own delivery drivers, likely a response to the onslaught of start-ups like Caviar, UberEats, and Postmates. The co-founder of fitness start-up ClassPass entered the restaurant world with MealPal, a company intended to change the way people eat lunch by offering unlimited weekday meals for a flat fee.

It also meant a particularly big year for delivery-only restaurants, or restaurants that don’t have dining rooms. Maple grew to Midtown and beyond this year. A company called Green Summit Group launched about ten virtual restaurants in Manhattan and Brooklyn, and celebrity chefs like Michael White and David Chang opened their own virtual restaurants, too. An app called Umi Kitchen — with a famous investor in the form of co-founder Hallie Meyer’s dad, Danny Meyer — is even delivering food from home cooks, a concept it likens to an Etsy for food.

Companies like Chang’s Momofuku Ando claim to be engineering food specifically for delivery, with millions in venture capital funding to help the process. But whether or not the food actually tastes better is debatable. Eater critic Ryan Sutton said in a review of Ando that the food was unremarkable, and no better than most regular restaurants that happen to offer delivery.

Still, while virtual restaurants have closed outside of New York, the trend has yet to show signs of any significant slowdown here. Profit really only comes with expansion — meaning 2016 may have been just the beginning for delivery-only restaurants. 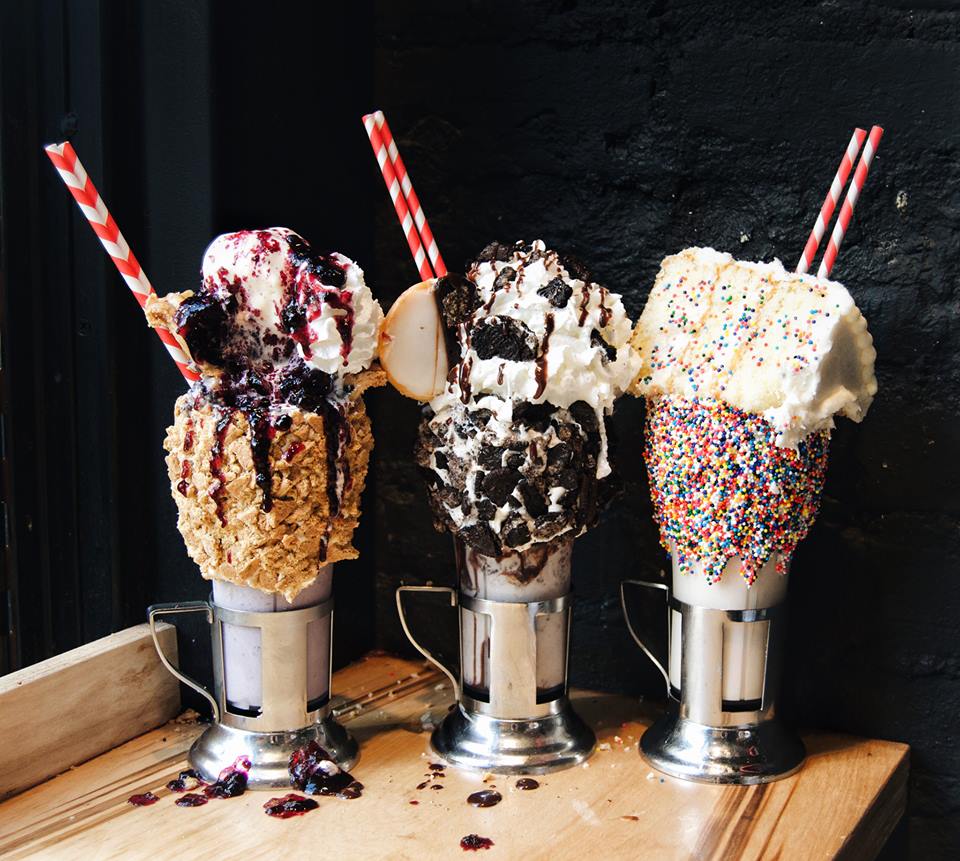 Black Tap's elaborately garnished milkshakes first debuted in fall of 2015, but the buzz over chef Joe Isidori's Instagram-bait shakes really reached a higher, line-inducing level in 2016. The calorie bombs come topped with things like cotton candy, slices of cake, and cookies, and their viral success was no accident. Isidori literally created them with his social media manger for PR purposes. It worked, and over the course of the year, the burger restaurant opened several more locations. Despite the obsession over the shake, Isidori —who originally gained a less viral form of acclaim for his burger — says all the new customers are ordering other food, too.

Elsewhere in the novelty food beat, a rainbow bagel at the Bagel Store in Williamsburg has been around since the ‘90s, only to blow up on social media in 2016. The rush hit the store so hard that one location had to temporarily close, proving that selling novelty foods is not for the faint of heart.

Other big Instagram-bait of 2016: giant soup dumpling, soft-serve in fish-shaped cones, all the Thai rolled ice cream spots, and the Museum of Ice Cream pop-up.

Sarma Melngailis ran one of New York’s hippest restaurants for a stretch, a raw food vegan place in Gramercy called Pure Food & Wine popular with celebrities like Alec Baldwin. Her downfall started in 2015, when she stopped paying employees and left town, but a lot of the bizarre, behind-the-scenes details emerged this year after she was arrested with her husband Anthony Strangis in Sevierville, Tennessee.

She and Strangis were wanted for spending nearly $2 million of company money on things like gambling, luxury hotels, and Uber. They were ultimately caught in May after Strangis ordered a cheese pizza from Domino’s. Now, she’s on trial for the crimes, and she’s been on a public repentance campaign. Melngailis claims she didn’t eat the incriminating pizza and maintained a vegan diet while on the run. She also says she wants to pay all her employees back, and that the whole thing was a result of psychological abuse from Strangis. In a Vanity Fair profile, she said that Strangis "resorted to cult-like techniques" to control her, while Strangis’s attorneys say Melngailis was too savvy of a businesswoman to ever fall for such tricks.

It turned into one of the most outlandish stories in the New York restaurant world this year, and one with real impact on devotees of the niche, raw-food lifestyle Melgnailis helped promote. One investor said after her arrest: "I visited her restaurant every year and was happy to help her business, which I loved. It was a sad and shocking betrayal. She hurt a LOT of people."

If people weren’t lining up for Instagram-bait food, they were lining up for the newest chain restaurant selling some sort of Japanese food. First it was TsuruTonTan, the udon shop from Japan that opened its first New York location in the former Union Square Cafe space. Wagamama, a longtime Japanese food chain based in the UK, and Sugarfish, an LA-based casual sushi restaurant, also debuted with hefty lines and long waits.

But none had as an obsessive of a following as Ichiran, a ramen chain from Japan known for its solo dining booths. It planted its first U.S. location in October at the edges of Bushwick and East Williamsburg, near the Morgan Avenue L stop. Even though it first opened at 11 a.m. on a workday on an industrial stretch, hundreds of people lined up. Some of them admitted to skipping work to go. The opening was not without hiccups — the prices in New York are more than double those in Japan, a fact that die-hard fans did not take well. Still, expect to see more of Ichiran in the future. Their out-of-the-way first New York location was positioned specifically so that expansion will be easier in the near future.

Including a dim sum chain with a dedicated crew of fans

Tim Ho Wan, a Hong-Kong based dim sum restaurant, opened its first U.S. location in the East Village in December. It was a soft opening with limited hours, but on its debut weekend, so many people lined up that the restaurant sometimes had to stop taking names before it even technically opened for business. On Sunday morning, the restaurant took down the name of the last diner around 10:50 a.m. — ten minutes before lunch actually started at 11 a.m. The restaurant from chefs Mak Kwai Pui and Leung Fai Keung experiences similar lines at its home base. It's one of the world's lowest-priced Michelin star restaurants, a label that's helped the chefs launch more than 40 locations around the world.

The rollout of movie theaters with better food, dining

Movie theaters where servers bring food and booze during screenings have been around for years, though for a long time, New York only boasted the indie theater Nitehawk. That changed in 2016, when both independent and chain versions of the concept opened in New York, including Syndicated in Bushwick, Metrograph Commissary in the Lowest East Side, iPic in South Street Seaport, and Alamo Drafthouse in Downtown Brooklyn. Plus, Nitehawk announced that it would be taking over a theater in Park Slope. As far as operators are concerned, New York could handle even more of these upscale theaters. "New York is still, in my opinion, underscreened for the population," Alamo Drafthouse Tim League said this year.

All that said, here are the most viewed news stories of the year

2) A Peek at Bourdain Market and its International Influences

5) MealPass, a ClassPass-Style Lunch Service, Launches in NYC This Week

9) Masa Will End Tipping; Dinner for Two Will Cost More Than a MacBook

10) Keller Responds to Per Se Review: 'We Are Sorry We Let You Down'