Review and information for Paowalla

As a critic, one of my longstanding axioms is that when I review a restaurant, I avoid discussion of the restaurant’s name. Inevitably, the story behind the word or phrase is a red herring — something about a childhood turtle that ran away, a corgi that was flushed down the toilet, or an obscure street that was irrevocably altered when Robert Moses ruined the mom and pop ethos of a now condo-pocked neighborhood. These tales serve to distract from what truly matters, which is everything else.

Each word I devote to explaining why an establishment is named for a fake ancestor who bartered for finger limes with Kool-Aid points – a history I can’t possibly verify – is one less word I have at my disposal toward assessing the worth of a venue, the value of its prices, the quality of its, say, tomato-skin tacos. A restaurant’s name is its own narrative. A review, by contrast, is not the restaurant’s narrative. It is the critic’s narrative. It’s my narrative.

Then again, I occasionally break my own rules. Take Paowalla, a new Soho outpost from Floyd Cardoz whose moniker is fantastically straightforward. Paowalla is a Portuguese-Hindi hybrid word meaning "a person who sells bread," and it’s an appropriate title for a lovely spot that pays homage to the diverse baked goods of the South Asian subcontinent.

Paowalla’s name is useful in the most direct sense. What makes the restaurant one of the city’s most essential new spots is its array of breads, Indian and Indian-inspired — from whole wheat rotis, to puffy kulchas, to Tibetan tingmos, to tandoori-bruised naans, to room-temperature fish pies, to mini wada pao sandwiches (don’t you dare call them sliders), to honey-lime croissants, to pecan chai sticky buns. If a diner ever feels overwhelmed by the voluminous, hit-or-miss menu, she can remember what the restaurant calls itself and know precisely what to order: carbs, carbs, and more carbs.

Bacon naan, a BLT without the L or the T, is back after a six-year absence from the New York dining scene. It’s heated up in the tandoor oven to the chewy texture of an Olive Garden breadstick. It’s stuffed with a thin layer of minced pork belly. And it’s cut into six triangular slices like a pizza. Those who find it a touch salty can order a $3 side of yogurt raita – though one can’t help but wonder whether these will evolve at some point into a cool ranch dipping sauce. I wouldn’t put it past Cardoz, one of the city’s most creative chefs, a hospitality industry veteran who’s found his groove again by slinging egg creams, wok-frying chile chicken, and baking darn good bread.

Before Paowalla, informed gourmands would talk about Cardoz’s food they way they’d talk about the forgotten recipes of a deceased grandparent, which is to say wistfully, and with a malaise suggesting that no one else might discover such flavor combinations again.

The Mumbai-born, Lespinasse-trained chef rose to fame at the helm of Tabla, the Union Square Hospitality Group restaurant that tried to persuade turn-of-the-millennium New Yorkers to accept Indian fare as a cuisine that’s as worthy of refining and rethinking as fancy French — even as critics of the era painted aspects of the venue as "exotic" or evoking "the far side of the world." Upstairs at Tabla, Cardoz went all white tablecloth and fine-dining with a tasting format, dishing up breathtaking rice-flaked halibut with watermelon curry. Downstairs, he went with the more affordable, a la carte Bread Bar (another great name), trafficking in potato apple chaat and – you guessed it – bacon naan. The restaurant, alas, was ahead of its time, and, at a whopping 280 seats, too big for its own good. It closed in 2010 after a 12-year run. Cardoz took a detour farther downtown to open restaurants for Meyer (and Dave Zinczenko), but Paowalla is his true return to form.

Floyd Cardoz and the dining room

Paowalla has fewer than a third of Tabla’s seats – just 72 bodies can dine in this space – and most of them are full on any given evening, particulary those at the bar, which is the best place to swing by for a few quick breads, beers, and small plates. The restaurant itself isn’t much to look at; its dark browns, exposed brick, and wood-fired oven could let Paowalla pass itself off as a steakhouse, a rustic Italian spot, or a New American joint. And that’s okay, because you’re not here for a Le Coucou-style fashion show. You’re here to eat.

You’re here to stuff your face with bread. Tingmo, a pinwheel of steamed dough brushed with a smoky garlic-chile chutney, evokes the gorgeously doughy texture of an underbaked Pillsbury dinner roll. Savory pie, made with ghee, flour, and coconut milk, gets stuffed with a mash of coriander-laced shrimp curry that tastes like the crustacean to the power of ten.

Pao, the straight-sided roll that descended from Portuguese-occupied Goa (and the restaurant’s namesake), might arrive hot and characteristically sweet, a counterpoint to the mineral-tinged chicken livers that sit atop. Or the rolls might be served as wada paos, stuffed with fried potato dumplings, seasoned with three different chutneys ranging from mouth puckering to incendiary, and finished with chura, the delicious bits of batter that fall off during the frying process and take on the flavor of a coconut-flavored crisp.

Shall I go on? Cheese kulcha, another old Bread Bar staple, oozes from the sides with melty New York cheddar. A searing visit to the tandoor imparts the exterior with a gentle crispness, while a smattering of cayenne and toasted black pepper provides just a whisper of warmth.

Paowalla’s stuffed masterpieces cost less than $12, while the breads alone are $5 or less. And here it’s worth recognizing how vital the Indian restaurant community has been in helping New Yorkers, on a subconscious level at least, appreciate the cost of baked goods. Many give props to Momofuku’s David Chang, who, in 2006, ruffled feathers when he became one of the first major New York restaurants to charge for a baguette with good butter. But South Asian spots, the erstwhile Tabla included, have almost always charged for their made-to-order breads.

Not even the naan is gratis at Paowalla. Nor should it be. The bread’s underskirt packs the uniform crackle of matzoh while the stretchy, doughy surface puffs up like an edible, leopard-spotted, ghee-slicked circus tent. Take a swatch and use it to scoop up a mound of al dente, cumin-laced daal. The flavor of the sauce and the spices are intense at first, but then they soften when you get to the surprising heart of the bowl: a baseball-sized gob of burrata. The runoff cream streaks through the mahogany legumes like a swirl of whipped cream runs through chocolate pudding. In a year when this milky cheese is quickly becoming a newly ubiquitous avocado toast, Cardoz makes the overused curd feel new and relevant again.

Kudos to the 56-year-old Cardoz for knowing how to identify an ongoing trend and speed toward the front of the pack. Indo-Chinese fare, from Babu Ji’s Gobi Manchurian sweet-sour cauliflower to Pondicheri’s Sichuan peppercorn-braised paneer, is experiencing a boomlet of sorts, and Cardoz is on it. He takes tender-as-hell chicken oysters, the most prized part of the bird, douses them in tamari, and then wok fries them with garlic, cilantro, serrano chiles, finger chiles, and Thai chiles. The pain is intense, but stay with it — the flavor that arises is clear and pure. Rather than drawing upon a typically fruity habanero heat or a smoldering back of the mouth black pepper heat, Cardoz goes for a stinging, verdant, vegetal heat, your mouth under assault by everything that’s green in your garden.

Cool off with an $8 almond egg cream, milky and sweet as marzipan. And if you’re the type who thinks that mango lassi is better if it gets you buzzed, Paowalla will be happy to indulge you — if you’re willing to pay $14 for a drink that really, truly tastes better with no alcohol. You can also pay $10 for a draft beer, which is what it should cost after tip, not before, even in Soho.

Paowalla does have its pitfalls. Black pepper shrimp are bland and mushy. Crispy squash blossoms and green tomatoes are an effort in turning fine vegetables into indistinct fritters packed with gobs of hot cheese. Yogurt-marinated chicken tikka is as predictably tasty and juicy, as it is any great Indian joint – order it if you want something ordinary, which I’ll admit I sometimes want myself. But the big bowl of biryani, a mess of flabby bacon and forgettable chorizo in $57 worth of rice, won’t be something I ever revisit.

The better course to follow is one that includes Cardoz’s famous rice-flaked halibut, or his outstanding banana leaf-roasted goat, tender and clean with an edge of pastoral funk, the flesh begging to be scooped up with rosemary naan.

Cardoz says he’ll expanding his bread program even further, with seasonal stuffed breads (currently: a potato and cauliflower paratha), more stuffings for his paos, and possibly even regional papadums, the deliciously paper-thin gram-flour crisps that look like petrified bubble wrap. Cardoz, in a city dominated by great French and Italian bakeries, and in a building that’s just down the block from Dominique Ansel, one of New York’s most whimsical patisseries, is running a restaurant that happens to be one of Manhattan’s great boulangeries, Indian or otherwise. It’s all proof that with Paowalla, sometimes quite a lot is in a name.

What to drink: Light, bright, aromatic whites, with myriad bottles at $75 or below. Also consider the fine mango lassi or almond egg creme.

Bonus tip: Many dishes available to go, which might be a smart move when the venue crowds up. 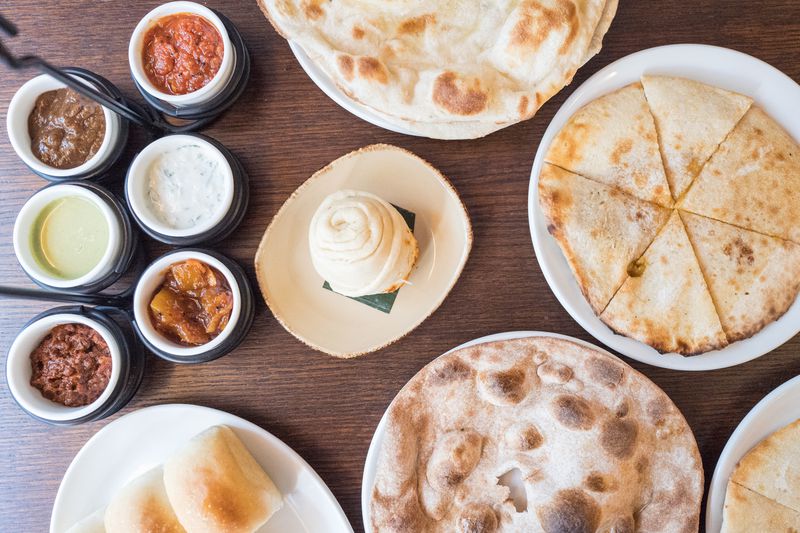 What to drink: Light, bright, aromatic whites, with myriad bottles at $75 or below. Also consider the fine mango lassi or almond egg creme.

Bonus tip: Many dishes available to go, which might be a smart move when the venue crowds up.

Which of These NYC-Based Chicago Dogs Is Better?