Mexican food enthusiasts generally agree that the country’s most exciting eats are found in Oaxaca. In this rugged land of scenic beauty in southernmost Mexico, indigenous Native American tribes like the Zapotecs and Mixtecs still make up a large part of the population. The cooking is exceedingly time-consuming, using ingredients like nuts, herbs, fruits, chocolate, and dried chiles to make complex sauces in earthen hues called moles, which often date to pre-Columbian times. The corn-based antojitos are different, too, including garnachas, tlayudas, tetelas, and tamales that come wrapped in banana leaves instead of corn husks. One taste of real Oaxacan fare and you’re hooked.

Unfortunately, New York City generally ignores the cuisine. While Los Angeles hosts such amazing Oaxacan restaurants as the traditional Guelaguetza, and the more innovative Mole De Los Dioses, plus over a dozen others, we have only La Morada in the Bronx, where the menu merely dabbles in Oaxacan food. Stray dishes are to be found at restaurants like Rosa Mexicano and Hecho en Dumbo, but even the taco chain that calls itself Oaxaca, without a trace of embarrassment, offers little authentic Oaxacan fare. Heck, even New Brunswick, NJ, boasts at least four Oaxacan restaurants.

Thus it was exciting to learn that a new Oaxacan spot had opened in January on Church Avenue in Kensington. Once a pizzeria, La Loba Cantina boasts two high-ceilinged rooms outfitted with small pedestal cerveza tables; tiled flooring in random patterns; a shrine to the Virgin of Guadalupe; paintings of blushing, bare-shouldered señioritas; a Spanish guitar begging to be strummed; with cacti and other xerophytic foliage in profusion. In short, the place really feels like a dusty cantina in southern Mexico. The bare-bones second room is devoted to an open kitchen, while a rear courtyard catapults you back into the world of Brooklyn tenements.

But one glance at the menu lets you know the place is more about mezcal — a smoky spirit associated with Oaxaca — than about food. This is not necessarily a bad thing. There are 50 varieties available in small and large shots, ranging in price from $6 to $30. Many come in picturesque pours, featuring gourds, crockery, citrus wedges, and spice-dusted wooden platforms. Really, if you escape the cantina without becoming tipsy from a couple of shots, you’re missing the point of La Loba ("The She-Wolf"). The drinks list also includes themed cocktails, beers, and a roster of tequilas, but more interesting are several obscure spirits, including herby sotol, fruity raicilla, and bacanora — a liquor smelling like pears that was bootlegged before 1992 legalization, as the menu tells us.

Inevitably, this alcoholic onslaught overshadows the food, much of which is nevertheless quite good. Foremost on the evening menu is the tlayuda, often referred to as a Mexican pizza. A large round of hand-patted masa is rubbed with refried black beans, then heaped with spring onions, avocado, cilantro, stringy white cheese, radishes, and tomatoes. The dish is exceedingly pretty, though La Loba’s rendition is too bland and greaseless. By contrast, the tlayudas in Oaxaca often come layered with gobs of raw lard and the funky jerky called tasajo. Of the four variations at La Loba, pick the house-made chorizo ($13), rather than the plain, chicken, or cactus.

Faring better are the Oaxacan tetelas (two for $7), folded masa triangles stuffed with beans and cheese, delicious when dipped in the accompanying brick-red salsa. Quesadillas ($9 to $11) are huge flops of folded-over masa dough, rather than the stateside bar snack of parallel flour tortillas glued together with cheese. In this case they’re stuffed with mushrooms, squash, chicken, or just cheese. One thing to skip is the ceviche, which features fish, pineapple, and jicama mounted on two small tostadas. The problem with the restaurant’s version is too little fish. Panuchos, featuring a blue fried-tortilla base, are topped with cochinita pibil, the pork stew that constitutes Yucatan’s gift to world cuisine. Here it lacks the perfume of bitter oranges and mouth-thrashing habanero chiles.

[Top photos: a tamale and a shot of mezcal. Bottom: pozole.]

A separate lunch menu available only on Saturday and Sunday afternoons offers more of interest than the evening bill of fare — though both could use more dishes originating in Oaxaca. On it is a green pozole from the state of Guerrero — a wondrous swamp of verdant flavor floating pungent fresh herbs, scimitars of green avocado, and glistening coins of radish. This is the very spirit of southern Mexico expressed in a soup. Almost as good is the luncheon repast of tired tortillas called chilaquiles (which you should ask to be customized with a pair of fried eggs), and memelitas — miniature ridged masa vessels filled with refried beans and cheese. La Loba could become your favorite brunch spot in Kensington.

The best thing on the menu is the Oaxacan tamale ($5), found on the brunch menu but also usually available in the evenings. Bursting with shredded poultry, red chile sauce, and herbs, it comes wrapped in banana leaves, which impart a creamier texture to the masa than corn husks. You could happily make a whole meal of these — washed down with a shot or two of mezcal, por supuesto.

Cost: Dinner for two, featuring two tamales as apps, a tlayuda, a quesadilla, and two large shots of mezcal, including tax but not tip, $65

What to drink: watermelon juice, beer, margaritas, or shots of mezcal.

Bonus tip: If you use La Loba as a drinking and snacking destination, you’ll be satisfied, but it doesn’t function well as a full-meal destination. The rather unambitious menu needs some distinctively Oaxacan entrees.

Our review of La Loba Cantina 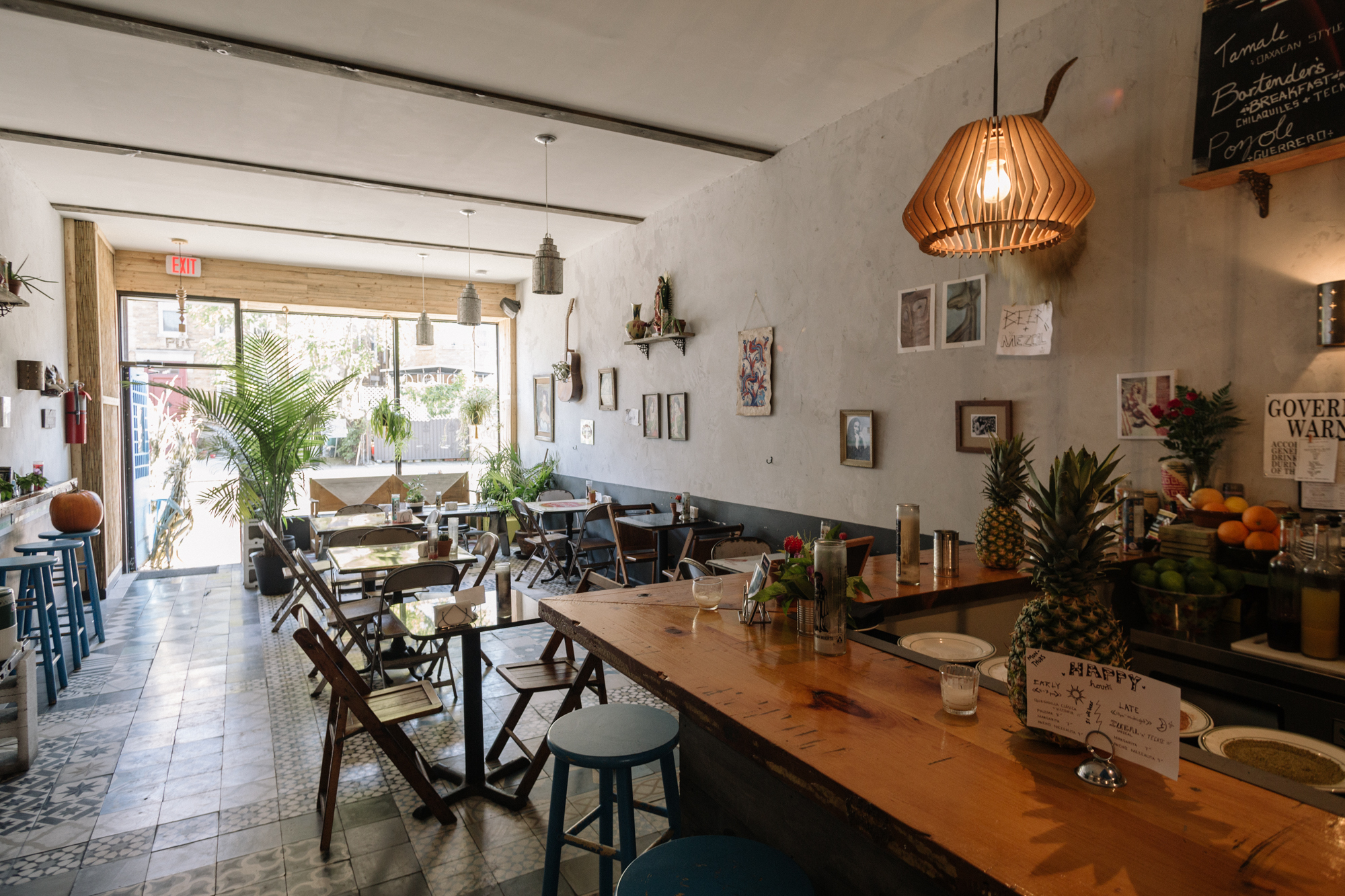 Cost: Dinner for two, featuring two tamales as apps, a tlayuda, a quesadilla, and two large shots of mezcal, including tax but not tip, $65

What to drink: watermelon juice, beer, margaritas, or shots of mezcal.

Bonus tip: If you use La Loba as a drinking and snacking destination, you’ll be satisfied, but it doesn’t function well as a full-meal destination. The rather unambitious menu needs some distinctively Oaxacan entrees.