In his cookbook Tacos: Recipes and Provocations, chef Alex Stupak details his obsession with pineapple-garnished pork tacos in an essay called "The Agony and The Ecstasy of Al Pastor." The Mexican classic is "so rich with Maillard-reaction goodness," Stupak writes, "that a single bite can short-circuit your pleasure center and leave you in a speechless, slack-jawed twilight." This porcine obsession, combined with the chef's birdie flipping iconoclasm, explains why Stupak has placed the humble street food, which rarely costs more than a few dollars, on his 21-course counter menu at Empellon Cocina, where dinner for two often exceeds $500.

It's a bold move. Even bolder: Stupak's version of this meaty treat contains no flesh, just achiote-rubbed pineapple and a few slices of lardo. Inverse al pastor is the name, making it perhaps the first taco to take its cue from the formal language of logic. "A basic formula for creativity is to change the proportions," says the 35-year-old, who speaks in the tone one might expect from a Yale chemistry professor lecturing to a crowd of three hundred. Stupak, in this case, is speaking to four people.

He walks over to the rotisserie, palms a tortilla, presses it against the piña, and slices off a few shards of fat and fruit. He drizzles each taco with Christmas-colored salsas and cilantro. He places it in front of you as if it were a warm piece of sushi at Masa. And as you eat, you start to come to terms with the following: That the final savory course of an expensive tasting isn't a cumbersome protein meant to be cut with Laguiole knife but rather a fruit taco whose sauces are meant to dribble down your chin. That this Mexican-inspired affair is the only non-Japanese omakase where the primary utensils are your hands. That pineapple with lardo manages to be a more savory expression of what you've always imagined to al pastor to be. And that Stupak, the guy who hawks nachos on St. Marks Place and guac in the West Village, has earned a spot as one of New York's most exciting tasting menu chefs.

The Economics of Creativity in Post-Recession New York

When a high-tech chef rides into town to cook for a night or two – be it Grant Achatz, Jordan Kahn, or Albert Adria – Empellon Cocina is frequently where the action takes place, and with good reason: aside from Stupak, there aren't a whole lot of modernist-trained chefs running their own restaurants in the Big Apple.

New York is indisputably one of the dining capitals of the world, but it's never really been a global destination for the type of experimental cuisine found in Barcelona (Tickets), Bray (The Fat Duck), or Chicago (Alinea). Our neo-classical city, with teems of bankers itching for protein-heavy client dinners, has a solid track record of sending avant-garde spots to the grave, from Varietal (mushroom desserts), to Corton (sashimi-stuffed cotton candy), to Sam Mason's Tailor (bubble gum cocktails and spherical veal), to WD~50, the Michelin-starred purveyor of pizza pebbles, knotted foie gras, coconut egg whites, and carrot juice yolks that employed Stupak as pastry chef for four years.

Perhaps the memories of a recession-era battering (along with rising labor costs) have prompted New York restaurateurs to channel more of their creative juices not into their cuisine but rather into their business models, with chefs toying around with no-tipping policies, lightly-staffed fast casual spots, and tiny stalls in epic food halls. Stupak's kitchen counter, accordingly, is not a separate restaurant, but rather four seats in the back of his East Village Cocina. Every spot is paid for in advance via the Tock ticketing system, at $95 for the 6 p.m. seating, and at $165 for the longer 8 p.m. seating. Translation: If no one shows up, the restaurant still makes money, and if no one books, Stupak still has a larger a la carte venue to run.

Empellon is hedging its bets here, and in exchange the guest is rewarded with the city's most intimate tasting experience: Stupak cooks for you, serves you, hands over a shot of leche de tigre right after you sit down. The clean, cold consommé of halibut, lime, tomato, and soy shocks the palate into action. And shortly afterward your tongue is set ablaze by a poblano pepper jelly, a dangerous surprise hiding underneath a tame panna cotta. There's your reimagined, retextured rajas con crema.

In Defense of the Long Tasting

Stupak issues a warning when things might get challenging. "Everyone okay with grasshoppers?" he asks, brandishing a chapulin-shaped serving piece filled with the namesake insect. They're not an uncommon ingredient in New York's Mexican restaurants, but at tasting menu venues, bugs are somewhat of a rarity. Stupak crushes them up with a mortar and pestle. "They taste more like celery salt this way," he says, using the smashed remains to garnish a single bite of fried chicken wing. Delicious. But if you don't dig it, another course is minutes away, perhaps blood sopes anointed by heady boudin noir; both the corn cake and the sausage crumble in the mouth like a musky, offal-y brownie.

The long tasting menu is key to creativity, a notion worth dwelling upon as the three Michelin-starred Eleven Madison Park prepares to more or less halve its course count and quicken the pace of dinner. Shorter menus typically breed more conservative preparations – a chef has less room for error because of a higher price per course. Longer menus, by contrast, allow for more risk, as a dish that doesn't work is forgotten nine courses later. Stupak, to his credit, balances this gastronomic philosophy with the more pragmatic reality that people occasionally want more than a single bite of something. So instead of sending out a never-ending supply of wedding buffet-sized hors d'oeuvres, preparations grow and shrink throughout the meal, a little bit of palate teasing here, a hint of hunger sating there. A ten bite plate of celery root sashimi with coconut cream and chile ash mayo – an abstract study in black and white – is followed by a poached oyster topped with nixtamalized popcorn kernels – simple food that just tastes good.

On the Myth of Authenticity

Stupak isn't afraid to juxtapose modernity with tradition, refinement with rusticity. He sends out crispy quesadillas with string cheese and pork belly and a near perfect salsa with each ingredient chosen by one of the four guests (an haute stone soup). It all tastes familiar. Here's what's less familiar: Super Bowl party-worthy masa waffles with chicken liver butter, or a tiny mousse-filled puff whose magnified flavors of dairy and corn feel like a gordita-esque hat tip to golgappe, the yogurt-filled Indian street snack. Then there's the classic Oaxacan black mole, which comes not as a chicken smothering sauce but as a star ingredient in its own right, an inky ice cream whose warming spice contradicts its cool temperature. A plate of prune sorbet with agar agar spiraled chocolate ganache appears soon after – followed by orange sorbet in gossamer gellan gum tuiles (edible cones as thin as Saran Wrap) – and you start to wonder whether you're back at WD~50. And you're okay with that, because you're here for creative, delicious food.

Above: Trout flauta with trout roe; Below: Manchamantales with apple, pineapple, and sweet potato and tres leches with kabocha squash.

"I'm not interested in the cuisine being recognized as Mexican any longer," Stupak writes in an email. "That's the genesis and consistent point of inspiration but I want to be free. All chefs and artists I admire are free. Was the cooking at El Bulli really Spanish by the end of it all?" He is correct. And as New Yorkers increasingly fly to Mexico City to splurge on elegant tasting menus (or spend $125 per person at Cosme in the Flatiron), they'll learn to dispense with the rosy eyed myths of authenticity and let Mexican food continue to do what cuisines hailing from countries with Michelin stars are allowed to do: evolve. And, for better or worse, become expensive. 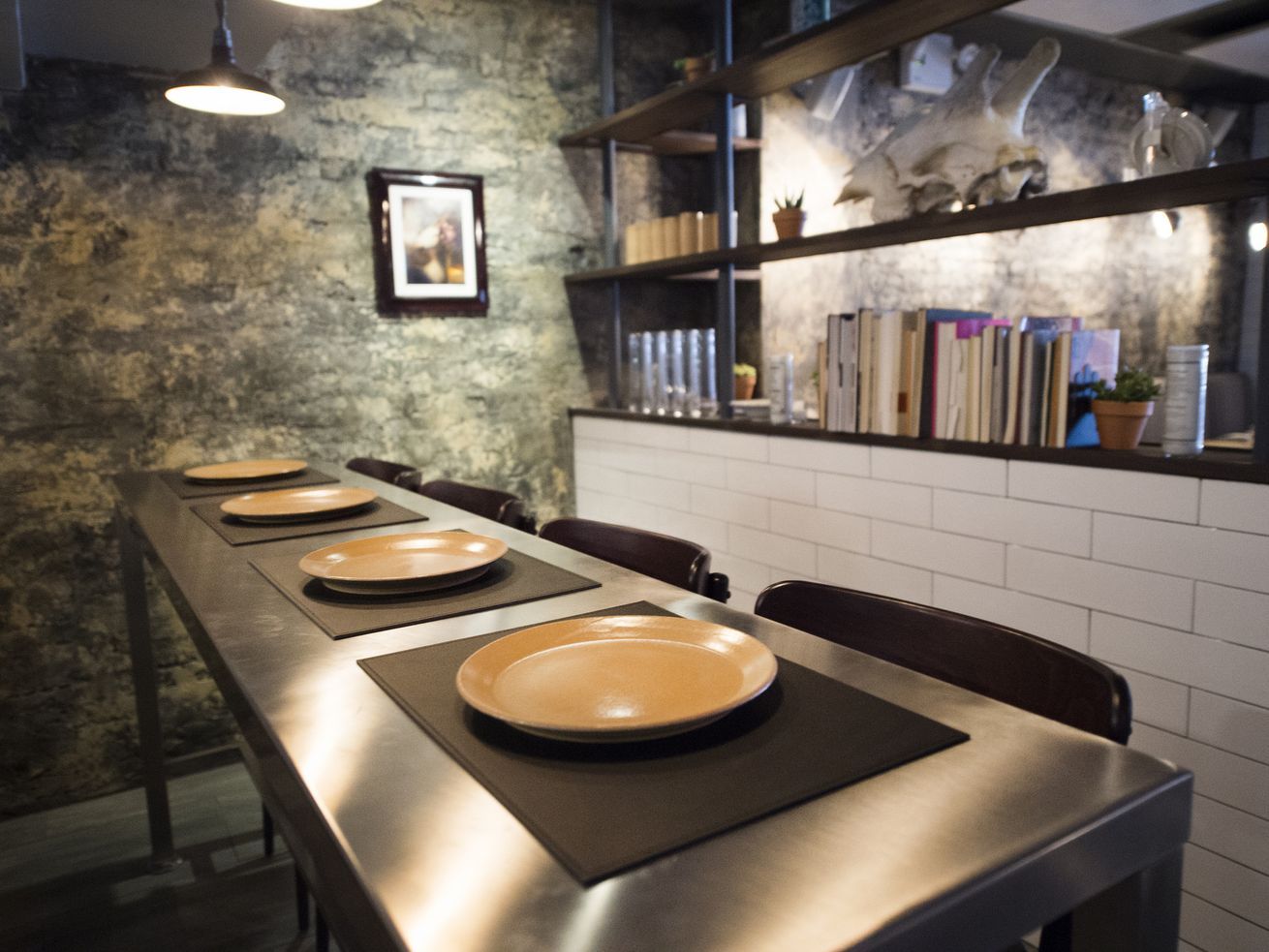