The 20 restaurants you should be eating at this very second. New and notable additions include Oiji, a Korean restaurant with addictive honey salt chips, and Sessanta, the new Sicilian spot from John McDonald and Jordan Frosolone.

It's exactly what it sounds like (a truly meta slice of pizza). And it's famous because of the internet.

Here are some excellent restaurants to hold a wedding reception. The list is diverse, including everything from tapas to barbecue to rustic Italian feasts.

4) Blue Hill at Stone Barns Joins EMP, Per Se, and Le Bernardin on the 50 Best List

Blue Hill was deemed to be one of the 50 best restaurants in the world. Big ups to Dan Barber, but the list still definitely has some problems. 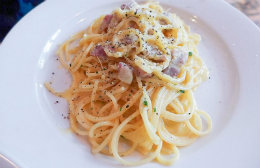 The LES just gained a new Italian restaurant called Spaghetti Incident. Here's Robert Sietsema with a first look at all those noodles. 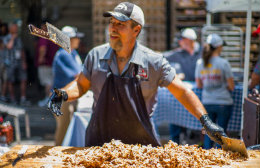 East Village institution Pomme Frites will reopen on the other side of town, after being destroyed in the East Village explosion. And, as an added bonus, the owners plan to start serving beer and wine.

62 year-old Julian Niccolini, a co-owner of the Four Seasons, was arrested on charges of sexually abusing the daughter of one of his business associates. His lawyer denies the charges, citing a lack of evidence, but it's not the first time Niccolini has been accused of sexual misconduct.

A summer-time barbecue pop-up helmed by Shane McBride as well as Rob Shawger, Ed McFarland of Ed's Lobster, and Del Posto chef de cuisine Matt Abdoo, who are all on competitive barbecue teams.