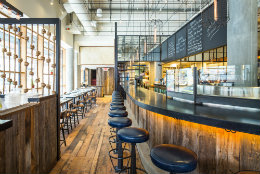 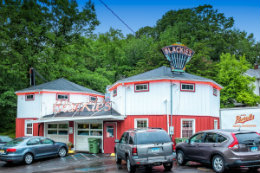 Robert Sietsema visits the local hole-in-the-walls that Connecticut has to offer and offers recommendations on where to find the best hot dogs, burgers, and fried clams.

Daniel Humm and Will Guidara are opening another fine dining restaurant with ambitions to make it the best restaurant in the world. David Levinson, one of the developers of the building calls it "Four Seasons on steroids for the 21st Century."

6) Wylie Dufresne to Open Hotel Restaurant in the FiDi; Floyd Cardoz Plans His Own Indian Restaurant

Both Wylie Dufresne and Floyd Cardoz have new restaurants in the works.

New York has plenty of food trucks, covering a wide expanse of foods and quality levels. These are the ones worth seeking out.

This week's eight new openings include a new bar from Charlie Palmer housed on the rooftop of the Knickerbocker.

A wheelchair-bound woman who attempted to sue the Fortunato Brothers under the Americans With Disabilities Act was told that the case had been dropped for her "safety." Her lawyer thinks the Genovese crime family is involved.

Specific drink recommendations from New York's hottest bars that cover everything from cocktails to beer, wine, and sherry.