Share All sharing options for: FUKUSANITY: First Impressions From Sietsema and Sutton

This morning David Chang birthed his newest Momofuku baby, Fuku, a spicy chicken sandwich shop in the old Ko space that he hopes to grow into a fast casual empire. Eater was on the scene, both critics in tow, and it's time to hear their first reactions.

Here's what Robert Sietsema has to say:

The new David Chang fast food-style fried chicken sandwich has been unveiled…and it’s damn good! A crisp plank of irregularly shaped thigh meat grandly protrudes from a bun that has been slathered top and bottom with a thin layer of what looks and tastes like mayo. Three pickle chips cavort underneath. The sandwich has been described as "spicy," but to chileheads it will seem just barely so. A bottle of red Ssam Sauce lingers on the side — a sort of Korean ketchup — but who needs it? The chicken is formidably crusty, without being soddenly so, and there’s nothing better than one of these sandwiches hot out of the grease. The best part: the faint perfume of Scotch bonnet peppers infuses the crust, sending the thing spinning in a Caribbean direction. And nobody who ate one of the first this morning didn’t want to eat another one right away.

There are antecedents, of course. This is above all an engineered product, from the oddly configured bird patty, to the large size of the patty compared to the squishy potato roll it comes on, extending to the spare garnishment. It was engendered partly by all those chicken biscuits Brooklyn has been peddling lately, but also by the Korean chicken chains, though thankfully without the sweetness. And using habanero rather than red chile flakes provides an inspiring extra vector of flavor. Chik-Fil-A provided inspiration, too, as did Danny Meyer’s Shake Shack.

One thing Fuku and Shake Shack have in common is their comparative contempt for fries. Shake Shack uses treated crinkle cuts, and recently reneged on a promise to provide better ones, while Fuku serves steak fries, the world’s worst type of fries, which seem to have been par-baked before being fried, thus giving them an interior texture of instant mashed potatoes. The reason for this is clear. All eyes should be on the sandwich, and if people came for excellent fries rather than the sandwich, the place would’t be deemed the same success. This might be called the Five Guys Effect: most people I know go there for the fries rather than the burgers.

There’s a grain salad, too, oddly dotted with canned mandarin oranges and tasting like it was borrowed from Dimes. Not bad with its bright orange dressing — if you feel you have to eat something healthy, that is. 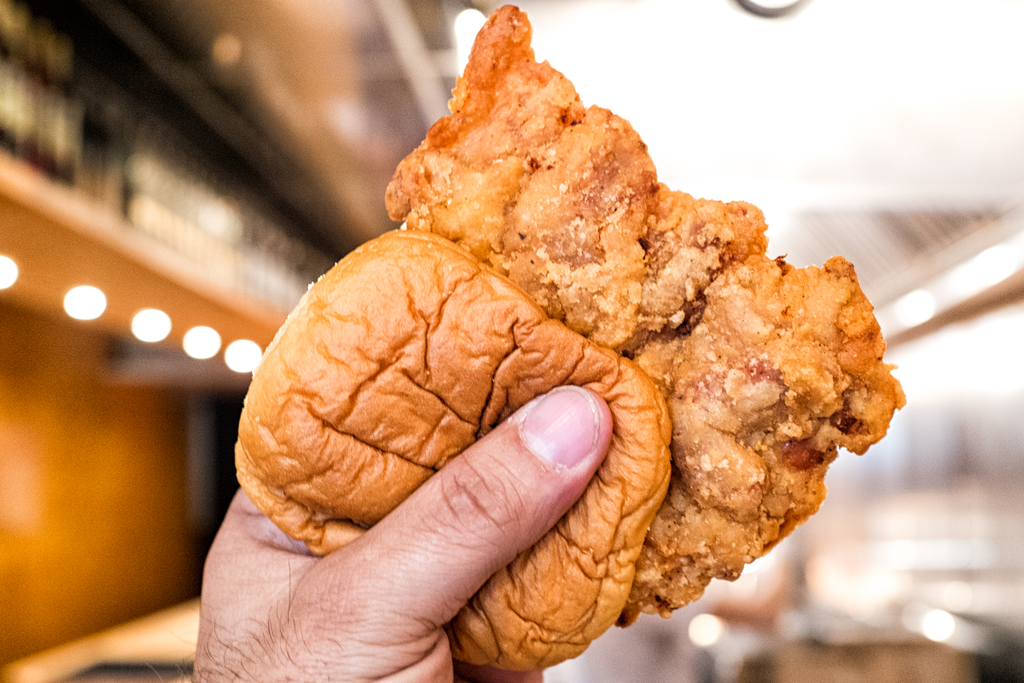 So 11 years after David Chang starting selling steamed pork buns for $5 at the original Momofuku Noodle Bar, he's hawking fried chicken sandwiches in the same space, now branded Fuku, for $8. That's a pretty good deal when you consider that a) he was selling $125 tasting menus at this location in the intervening years b) the Noodle Bar pork buns will now set you back $10. In other words, he's coming back to his roots. He's coming back to cheap.

This fast-casual space — Danny Meyer calls it "fine casual" — is a pretty exciting space to watch these days because it's giving critically acclaimed chefs like Jose Andres (Beefsteak), Mark Ladner (Pasta Flyer), and Brooks Headley (Superiority Burger) an opportunity to bring seasonal vegetables, humanely raised meats, and all sorts of delicious, semi-high end foods to consumers who might've otherwise gorged on "junk food" but who are looking for something more refined than McDonalds or Chick-Fil-A. These consumers are often novice gourmands who might not be prepared to spend $30 or $50 on a sit down dinner. Many of us in the food writing community were those same consumers a decade ago, clamoring to get into the original Momofuku Noodle Bar, a cheap haven for delicious, ambitious food in an overpriced city. So Fuku, like Shake Shack, stands well positioned to be the gateway drug to the world of eating in good restaurants — to the world of paying more for good food, sourced from sustainable methods, and served by people who are hopefully well compensated.

That's another way of saying there's a lot riding on this chicken sandwich. And for those who care about prices, that $8 is a bit more than a Shake Shack burger, which will run you $5.19 in New York. The good news is that Chang's sandwiches, in the opening hour of Fuku, are close to perfect.

The sandwich came out precisely 10 minutes after the order. That's longer that it would take to get a spicy sandwich at Wendy's, but shorter than at a sit-down restaurant.

The first thing you notice is the lopsided ratio of meat to bread. The chicken spills out of the bun like an oversized bao; it's a giant, uber-American version of the Momofuku pork bun. This means you get bites of pure poultry. And the poultry is glorious. The outside is about as crunchy as a deep-fried chicken, without that overly dense bite one might encounter with a deeper skillet fry. The flavor, even though you're eating thigh meat (versus a Chick-Fil-A breast), is neutral. This isn't the funky poultry apotheosis we're dealing with here. This is about the thigh carrying the flavor of the spices. And those spices are good, recalling the KFC spicy fried chicken wings I used to eat on Sundays while watching America's Funniest Home Videos. These are flavors from the pre-YouTube era.

The spices and the heat creep up on your palate quickly then dissipate about 15 seconds later. It's nowhere near as spicy as Paul Carmichael's old habanero fried chicken at Ma Peche.

The meat is juicy, with a thick, strip steak-esque layer of fat on one side, giving some bites a gorgeous, gummy chew. Those accustomed to the soft, spongy bite of a chicken McNugget won't like this, but I do. It's the type of texture you'll encounter when eating chicken at the Michelin-starred Tori Shin, where the beauty isn't so much the intrinsic flavor of the chicken (yakitori joints don't tend to get too funky with their birds) but the way the meat feels in your mouth. Sometimes it's chewy. Sometimes it's cartilaginous. Sometimes there's a hint of crunchy bone. No bone here at Fuku, but the satisfying chew can recalls the prized neck meat of a chicken crossed with a Japanese style karaage. Righteous.

Does it all taste better with pickles and the buttery bun? Not necessarily, but that's no more a complaint than saying your pulled pork is served on white bread. Remove the bun just as you'd remove a heavy sweater on a hot day and eat the meat by itself.

Fries come with for $12. Don't get them, because they're KFC-style steak fries, or wedges, which are universally accepted to be an inferior form of fry. Funny, we have Danny Meyer at Shake Shack, serving some of the country's best fast food burgers, and David Chang at Fuku, one of our country's great chefs, selling a game-changing chicken sandwich, and neither establishment offers fries that are any good. So be it.

The right side order at Fuku isn't the fries but the salad, a mix of farro, mandarin oranges, and anise-y shio. The cool grains and sweet citrus cleanse your palate well after a few bites of fatty, juicy chicken. Add a bit of the sweet-spicy Ssam Sauce (or the included Hibachi-style dressing) for moisture. When this joint goes late night, which it eventually will, the salad will be your go to-order when wasted, something clean and easy for your stomach to digest, instead of something fried and fatty for your stomach to eject.

So there you go. You might not see a Momofuku Noodle Bar or a Momofuku Ko open up in Des Moines, Iowa, anytime in the next decade, but I like to think we'll see Fukus cropping up across our fruited plane very soon, serving excellent chicken sandwiches to Americans who'll giggle when they intentionally mispronounce the name.