Review and information for Hometown

Olfactory dissonance, the sort of confusion that occurs when Cinnabon imbues parts of Penn Station with the aroma of a patisserie, is perhaps the most accurate way to describe the unusual sensation of standing near the entrance to Hometown in Red Hook, where errant pork fumes make you wonder whether the breeze off New York Harbor, curiously sweet and bereft of brine, has been magically smoked along with the brisket. This is not the type of fragrance one expects to encounter adjacent a heavily trafficked body of water. And this is not where one expects to find the city's best barbecue restaurant. But it is.

The not quite two year-old restaurant, located in a part of the city that cab drivers claim not to be able to find, can attract 45 minute lines and sell out of lamb belly by 8 pm on a Thursday. The grass-fed flesh, served on butcher's paper with no accoutrements, shreds like pork shoulder and drips with liquefied fat. Pick up a mound with your index finger and thumb and place it in your tongue. It dissolves like wet tissue paper. It exhibits a gamy musk throughout the chew; the flavor never subsides. The seasonings are simple: salt, pepper, and a touch of turbinado sugar, creating a mind-bending effect that’s essentially the savory analogue of dipping a pretzel in chocolate. If that's too much protein, the lamb belly also comes as part of a banh mi for a more balanced affair; the meat contains enough fat that it squishes down like the traditional pâté filling, a heady counterpoint to the mess of cilantro, chiles, and pickled slaw that anoints this Southwest-meets-Southeast Asia sandwich.

This is all the masterful work of Bill Durney, a man who doesn’t need a large Linkedin profile to recount his previous culinary exploits because, well, he doesn’t really have any. He didn’t go to culinary school or stage at Noma. Instead, he ran a protective services company for celebrities and foreign dignitaries, the same specialized career path that Liam Neeson's character followed in Taken before killing all the bad guys (and rightly so).

Durney, quite simply, learned how to cook barbecue in his backyard. He gave away his product at bars. He did catering gigs. He was mentored by the famed Wayne Mueller of Taylor, Texas.* And in September 2013, after suffering about $100,000 in build-out losses from Hurricane Sandy-related damage, he opened Hometown. He was 40 years old.

Such are the idiosyncrasies of the age of the pitmaster. These half-mechanics, half-meat shamans boast a technical supremacy in the burgeoning barbecue world that will surely make some young sous chefs rethink their classic training in that same way that dropout coders are making Ivy-leage grads doubt their $150K liberal arts degrees. Case in point is Austin’s Aaron Franklin, a musician and self-taught metalsmith who, out of the blue, became the foremost name in brisket cookery, resulting in three-hour lines, a presidential visit, and, earlier this year, a James Beard award, the first ever for 'cue.

Reading parts of Franklin’s cookbook can feel like combing though an entry-level engineering text; the tome recommends a 140-amp wire feed, with an auto-darkening helmet, for welding propane tanks. Durney speaks this language too, and listening to the Brooklyn native talk about standard offsets and reverse-flow smokers is not unlike watching Nascar pit crew members talk about, well, whatever it is they talk about. So this is where I disclaim, with some humility, that I'm not here to judge a rack of competition ribs like some of our country’s meat experts can. Rather, I’m here to argue why Hometown, as a barbecue restaurant, is just about unequaled in New York.

I’m here to argue why Hometown, as a barbecue restaurant, is just about unequaled in New York.

What makes Durney's efforts so noteworthy aren't just his faithful reproductions of the classics, but also his dogged pursuit of pushing barbecue outside of its conservative comfort zone with internationally-inclined offerings. His lamb belly, not uncommon in American restaurants, is somewhat of a rarity at smoked meat spots; the banh mi is even more of an outlier. Same goes for the Korean pork ribs, which are smoked and fried, and which don’t exhibit the wimpy, fall-off-the-bone tenderness as Hometown’s mediocre spare ribs; instead, they boast a firmer, meatier chomp. The musk of the Heritage swine is powerful, but tempered by a salty-sweet sugar glaze. Jerk ribs, by contrast, a nod to Brooklyn’s historic West Indian community, don’t pack as much of a porky punch — the smoky meat is rather a conduit for the fruity and complex sting of habanero.

What Sides & Desserts to Order

Sides are rarely stellar at any barbecue restaurant, and Hometown is no major exception to that rule, but some of the offerings are reasonably tasty, so here's what to get and what to skip.

Collard greens: Cooked in pork stock for a round, toothsome, umami-packed mouthfeel. Buy.

Smoked pit beans: Barbecue-style legumes, heavy and saucy, will never earn a place on a high-end vegetable tasting menu, and that's alright. These rich, firm beans deliver everything they promise, with bits of brisket burnt ends amping up the heartiness. Buy.

Hometown slaw: Indistinguishable from the kind one might find at a neighborhood bodega. Sell.

Backyard potato salad: Looks like a plate of cold smashed potatoes. The tangy, complex flavors are closer to a Russian Salat Olivier than a sweet German tuber salad. Strong buy.

Banana pudding: The barbecue classic, with a clean, fresh, concentrated aroma. Impossible not to order.

Hometown abides by the democratic, no reservations, Central Texas-style of ordering, familiar to those who frequent other fine barbecue institutions like Hill Country, Mighty Quinn’s, and BrisketTown. You order beer from the bar, wait in line, purchase your meats from a butcher, find a table, order more beer or wine (cocktails are terrible) and eat while listening to live music or while watching the Yankees on one of three giant flatscreens. You will likely spend as much time standing, waiting, drinking as you will spend sitting, eating, belching. And that's okay. Think of it as encouragement to walk around a bit and burn some calories after gorging on the Sriracha chicken wings.

None of this would fly at a tasting menu restaurant, where the focus is on removing the obstacles between the diner and her food, but the general conviviality of Hometown is enough to make one wonder why the rec-room set up isn’t employed with greater frequency at more ambitiously casual abodes. The system, which virtually eliminates waiters, even saves guests a few bucks by eliminating the need to leave a full gratuity. Durney, who points out that carvers are paid 50 percent more than the tipped minimum, says guests should not feel obligated to leave a gratuity (the average tip, he adds, is about 5.6 percent).

It’s also worth noting that the by-the-half-pound ordering policy allows guests to regulate their spending (and consumption) more efficiently than at traditional fixed-portion restaurants. It's a particularly helpful system that steakhouses would be well served to adopt in this era of sky-high beef prices.

Beef ribs (about $28 apiece) can easily feed two. The blackened meat ranges from soft and shreddable at the interior to heftier and more jerky-like at the edges. Alas, it’s more a study in elegant textures than anything else, as the flavor of the meat is thin and subsides quickly. Better idea: Save some bucks and order the house made jalapeno sausage, which contains all the complex, vegetal tang of the pepper without the incendiary heat.

Then there’s the Creekstone Farms brisket, which fully merits the trip to Red Hook. Sampled three times, the product is as consistent as anything at a Michelin-starred restaurant, an honor not held by a single barbecue establishment. The "flat" of the brisket (the lower, leaner part), smacks of a clean beefiness, while the fattier point (which sits above the flat) shows off the meat's accordion-like texture and gentle smoke flavor. And on top, the peppery bark forms a coating so sweet and pillowy it could easily pass itself off as a toasted marshmallow. If only the meat weren't a hint under-salted.

And if only there were more than one line for food at Hometown; procuring the excellent banana pudding can require another 40-minute wait on a Saturday. But look at the bright side: it's another opportunity to drink more beer, listen to more music, and order more lamb.

What to drink: Anything on tap. Weihenstephaner (a wheat beer) will refresh the palate after all the fat of barbecue; do the Smuttynose IPA for something more astringent. For wine, the Red Hook riesling, aromatic and dry, can stand up to the lighter meats with gentle acidity; avoid the cloying house red.

Bonus tip: Best way to get to Hometown from Manhattan is via the IKEA water taxi that leaves from slip 11A in the Financial District.

Our review of Hometown 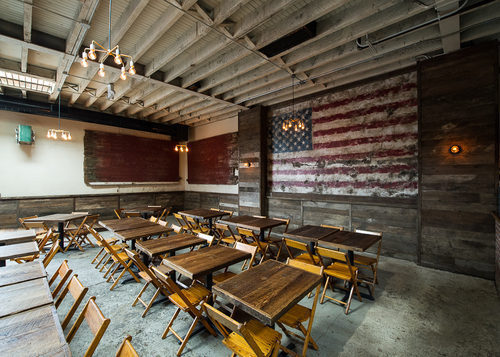 What to drink: Anything on tap. Weihenstephaner (a wheat beer) will refresh the palate after all the fat of barbecue; do the Smuttynose IPA for something more astringent. For wine, the Red Hook riesling, aromatic and dry, can stand up to the lighter meats with gentle acidity; avoid the cloying house red.

Bonus tip: Best way to get to Hometown from Manhattan is via the IKEA water taxi that leaves from slip 11A in the Financial District.