In a city that birthed Shake Shack, it may come as a surprise to find someone with the balls to open another casual burger joint. But if you're a family of farmers with the most transparently-sourced beef in town, then maybe there's something to the idea. Grazin' Tribeca is the second diner serving meat from Grazin Angus Acres, a 500-acre farm in Ghent, New York. Its grass-fed and finished beef is the only beef served both there and at a Grazin' in Hudson, NY, the only two 100% Animal Welfare Approved (AWA) restaurants in the world.

Dan and Susan Gibson are the owners of the Grazin' restaurants and the farm. The couples' 300 Black Angus cattle are allowed to wander freely, browsing on stems of clover whenever they feel like it. On their last day, the only bad one, they're taken to a slaughterhouse. It's the closest plant, and when the Gibsons started their farm, it wasn't AWA certified, but after Dan promised them all of his business, they changed their ways.

This all-or-nothing mindset of the Gibsons can be blamed on The Omnivore's Dilemma, Michael Pollan's book about what we choose to eat for dinner. It's from Pollan's book that Dan, who at the time was an executive with Starwood Hotels, helping to launch their well-known W-hotel chain, learned that there was a different type of farmer. He and Susan bought their farm in 2002, and at first weren't quite ready to quit their corporate jobs. But eventually, after dog-earing every page in the book and talking to other farmers, they took the leap. And now it makes more sense: how a Type-A farmer set his mind to running a profitable business. They're not rolling in the profits yet, but they're in the black and the family eats well.

Each member of the family has a role. Keith, their son, manages the farm and its twice-a-week locations at local farmer's markets. Their son-in-law Chip oversees the two restaurants. And everyone else – daughters, wives, kids – are out in the fields collecting eggs from their heritage hens, hand-milking the Jersey cows, feeding compost to the Tamworth pigs, or balancing the books of their LLC's.

In the farm's early days, the Gibsons were selling to restaurants in Manhattan that served commercially available burgers alongside one or two made of their premium grass-fed product. But Chip and Dan knew they didn't want to be those guys – the ones that serve sustainable ingredients alongside questionable ones. "Every protein would be AWA certified," Chip says.

Dan opened the first Grazin' in Hudson, in an old diner he bought at auction in 2011. Structurally the diner was in good shape, but it needed TLC. They cleaned and painted the interior, and shined up the stainless exterior themselves. While the farm was AWA, Dan wondered if there was more he could do. He called Andrew Gunther, Program Director of the AWA, and asked if they could get a full-restaurant certification, meaning every single animal protein served is AWA. No one had ever asked for this, but Gunther quickly instated it for Grazin'. When they flipped the sign to open, they had a line out the door for the entire weekend.

AWA isn't a well-known entity, but it's working hard to become one. Theirs is the most rigorous certification of meat in the U.S. and Canada, and is the only food label that requires all animals to be raised on pasture or range by independent farmers who are farming with the environment in mind. To date they have about 2,000 farms within their certification process. 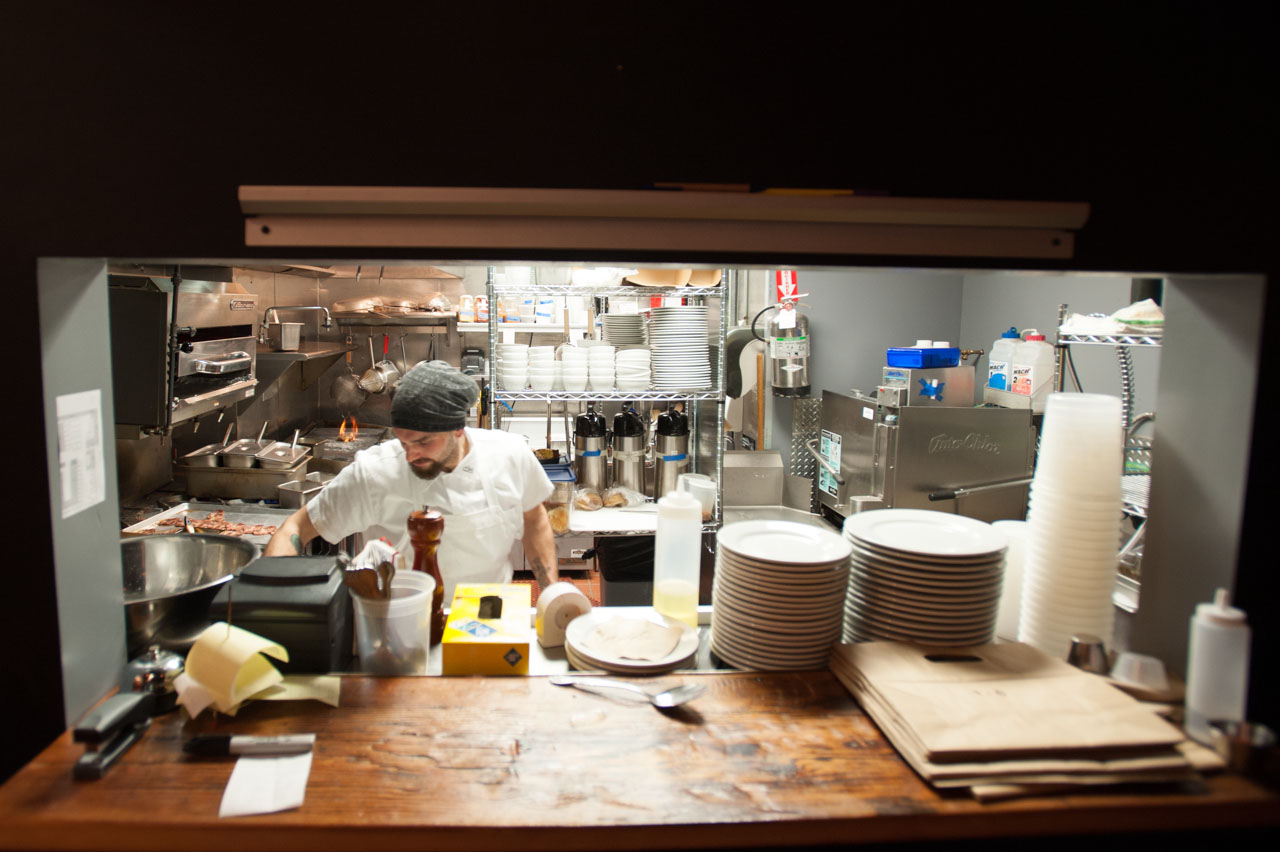 Kitchen staff inside the small but well-equipped kitchen at Grazin’.

After Hudson opened, it wasn't long before customers began asking the Gibsons when they were going to open in Manhattan. When they found their Tribeca location, a relatively small footprint on Reade Street (50 seats including the bar), with a cavernous basement that thrills their chef Steven Reese, they quickly signed the lease and began renovations. The contractor was a distant relative – his cousin's wife's cousin, and the wood used throughout came from a rundown farm in nearby Greeneville, New York. On the walls are close-up photos of their animals.

The same diligence to ingredients at Hudson is applied to Tribeca. Everything served is either from the Gibson farm, or from farmers they know. There are however, slight variations. The price of your city burger is $4 to $6 higher, and minus the de facto fries, but that's because of the rent, staffing and the increased miles to travel from farm to table. "You want to be competitive, but I'm not afraid to say that I think it's a deal at $14," Chip says.

While the main focus is perfect ingredients, they all hinge on the meat. "Every burger should be different. Sometimes it will taste more like iron, some cattle like clover more, so it will taste like that," he explains. The Gibsons don't want to be a fast-food chain, but they're already thinking of possible third locations. When and if they move out of state, it will be to cities that are near farmland, but doing that – maintaining the same level of excellence with ingredients – will be hard. "I'll have to do a diligent job of hiring, and conveying the mission in order to get the results I'm looking for," Chip says.

The challenge of building a brand where sourcing is beyond reproach is, some might say, impossible. Several competitors – including Shake Shack, 5 Napkin Burger, and even Pat LaFreida, who many say is the king of the gourmet burger – have not responded to inquiries about where and how they source their beef, and Umami Burger tells Eater that "The team is really reluctant to talk about beef sources." Only Bareburger, which at 25 locations is much smaller than any of these other chains, though much larger than Grazin', promises that its beef "is proprietary blend from grass-fed, grain-finished Black Angus cows," and that all of its restaurants "serve only organic and all-natural meats sourced from a limited list of reputable suppliers and farmers selected for their responsible practices." Scaling up is hard when you willingly open your doors to scrutiny, but Grazin' is still committed to trying.

In a testament to the brand, Reese, the chef at Tribeca, fell in love with Grazin' meat while working at Korzo Haus, the now-shuttered Slovakian burger spot in the East Village. After discovering the meat at the Union Square farmer's market, he convinced the owners they needed to source beyond Sysco, or as he calls it, "meat in tubes." He stored Chip in his phone as the "beef man," and when he arrived with a delivery it was "like Christmas." Reese would make Chip a burger and the two would chat biz. When he was invited to join Grazin' Tribeca – via Facebook – he didn't need to think twice. 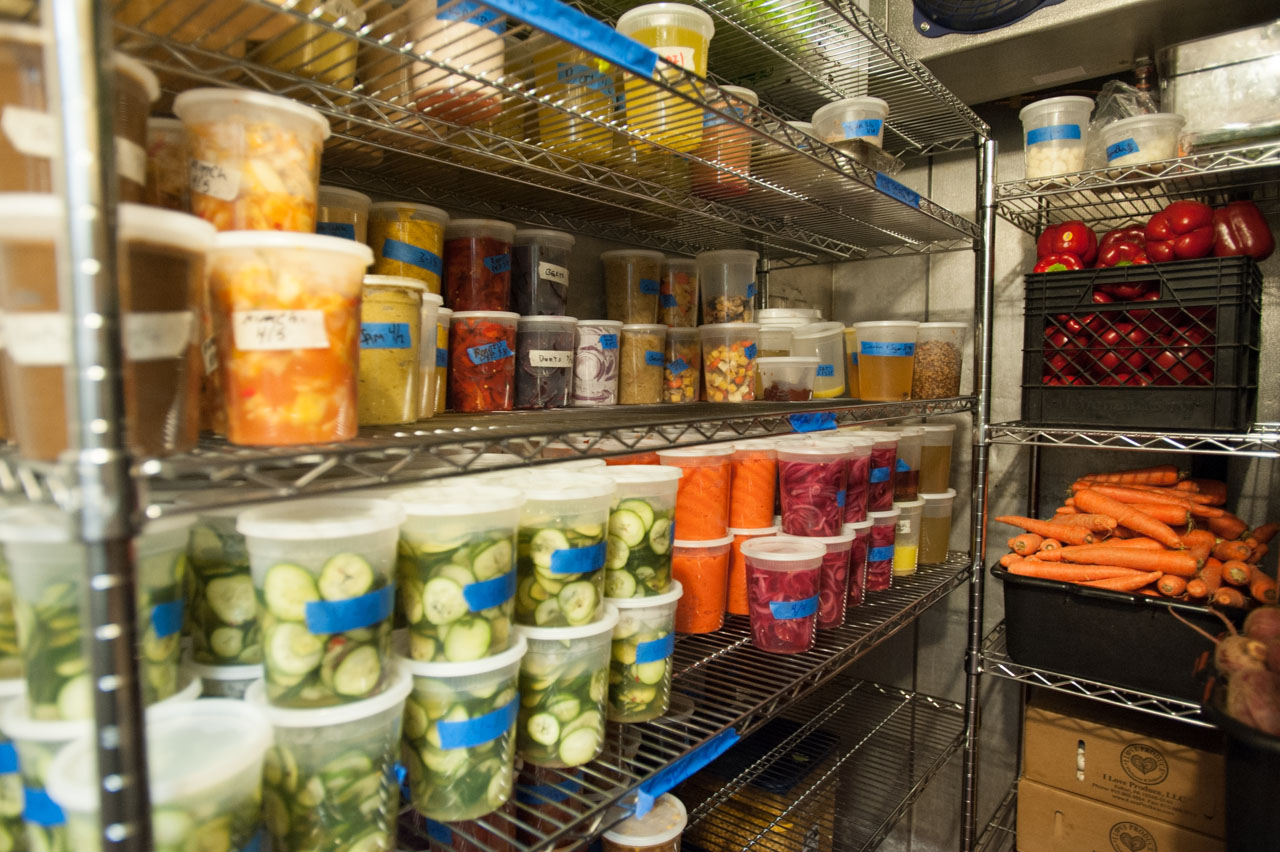 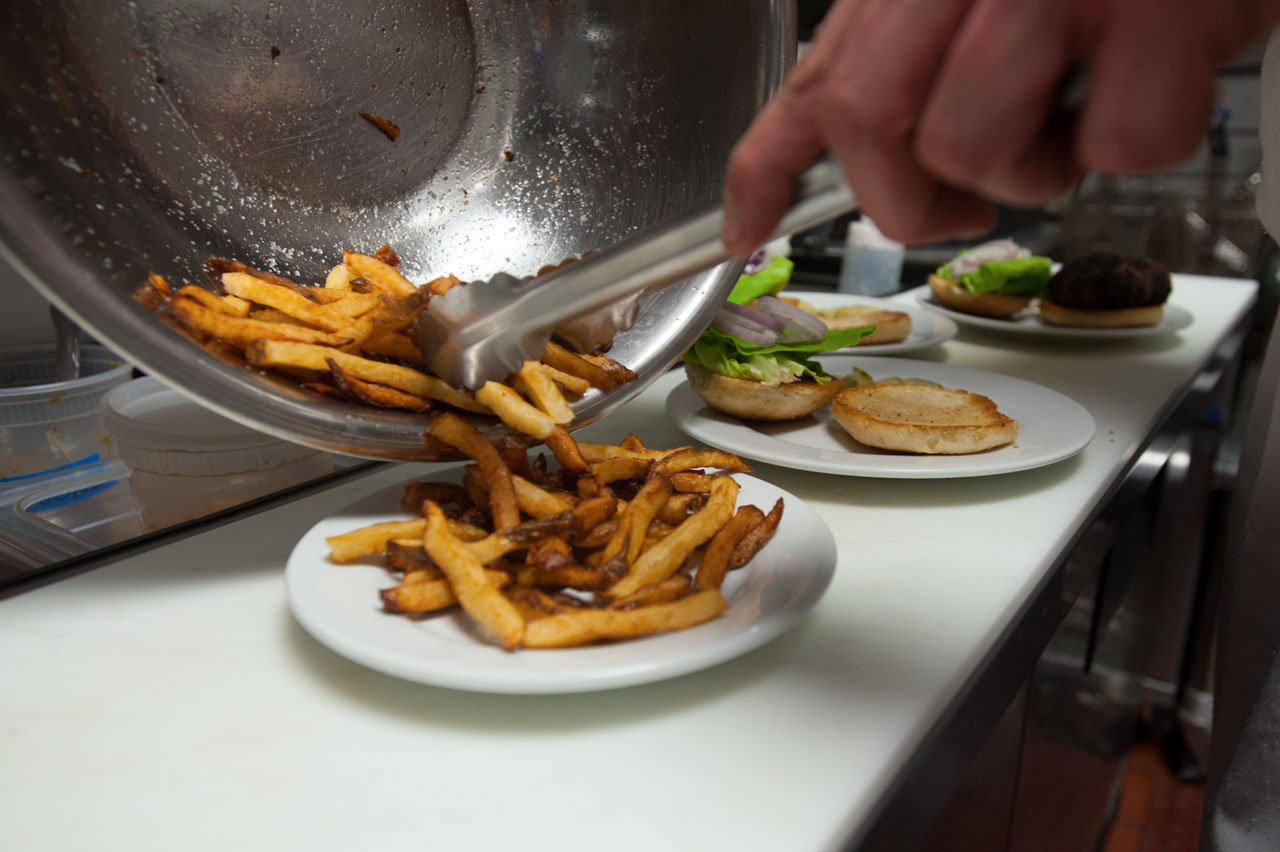 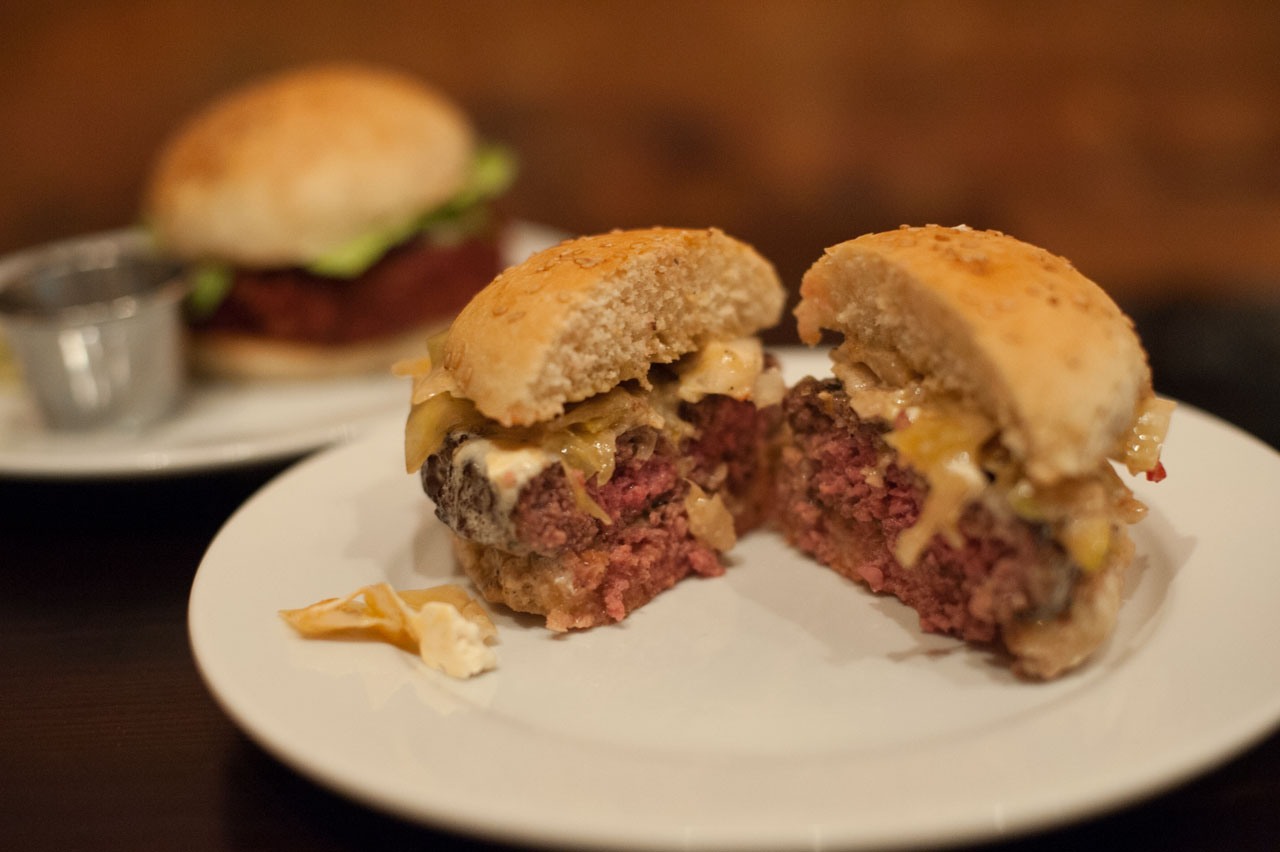 Top: Chef Steven Reese makes his own pickles and condiments.

His passion is evident when he describes his beet ketchup (no sugar added), his buttermilk aioli (the chef's Ranch) and his veggie burger (a blend of cashews, cannellini beans, and beets for color). Each day on the menu there's a special burger, one they hope will be polarizing. A few examples: the Seoul burger with kimchi and bone marrow butter, a burger with a fried mac 'n' cheese bun and barbecue pulled pork, and the Elvis burger, featuring banana jam, peanut butter, and bacon.

The worry about food costs is real, especially for a restaurant that touts their ingredients as being the best. Reese says his food costs are 19%, which is impressive given that the industry average is 25%. He also points to his zero waste kitchen: vegetable scraps go into a mirepoix, stocks and broths, while table scraps become compost for the pigs.

Along with this effort comes the occasional failure. Running out of orange juice at brunch, for example, which happens because they won't buy anything other than certified organic oranges from Florida, or sometimes California. And even if they haven't run out, those carefully-sourced oranges make for a pricey glass of juice. "There's a certain percentage of customers that will be unhappy with the price of a glass when we have it, and a certain percentage who will be upset if I don't have it at all," Chip says. Sourcing ingredients they can't make themselves is their hardest piece of the puzzle, and why you'll find the occasional slip, like food in cans (ketchup) and food that was once fresh but is now frozen (buns).

While they could easily be making a bigger profit, the family is committed to being as much of their own supply chain as possible, although Chip hopes there will be a time when they have so many customers they will need to find additional farmers to supply enough grass-fed AWA certified beef. Until then they're invested in the future, looking twenty years down the road. "Essentially our policy has been to present the highest quality organic ingredients, prepped by talented people who understand our mission; and charge enough to pay our staff and farmers accordingly."