As has already occurred in cities like Singapore, New York is turning into a maze of food courts. They’re often ensconced in cut-rate real estate, giving dining establishments a chance to rent smaller spaces at lower rents. As the reasoning goes, it’s a good way for start-ups and small chains to sidestep the skyrocketing cost of stand-alone stores, and now food courts have become a major fad in themselves.

Joining Gotham West, City Kitchen is the second to arrive in the area west of Times Square, occupying a second-floor space that’s clearly not prime real estate. Even the entrance telegraphs this fact: a narrow stairway twists upward to an unprepossessing entrance ("this is creepy," a friend noted), and a single small elevator — turned off on a recent visit — also provides access. Already, three weeks after opening, the place is mobbed at mealtimes.

New York is turning into a maze of food courts.

The selection of stalls is particularly good at City Kitchen. Included are a few old familiar faces such as Luke’s Lobster and Dough, with restaurants like Ippudo and ilili taking a first plunge into the food court scene. The food counters line up along the northern wall, with a handful of kiosks in the center, for a total of nine establishments. A shelf with stools runs along the big picture windows opposite the stalls, providing spectacular views of 8th Avenue and 44th Street, and a small collection of tables are additionally provided between the kiosks. Nevertheless, the volume of seating is totally inadequate at peak hours. (There is also a small seating area overlooking the lobby of the Row Hotel next door.) 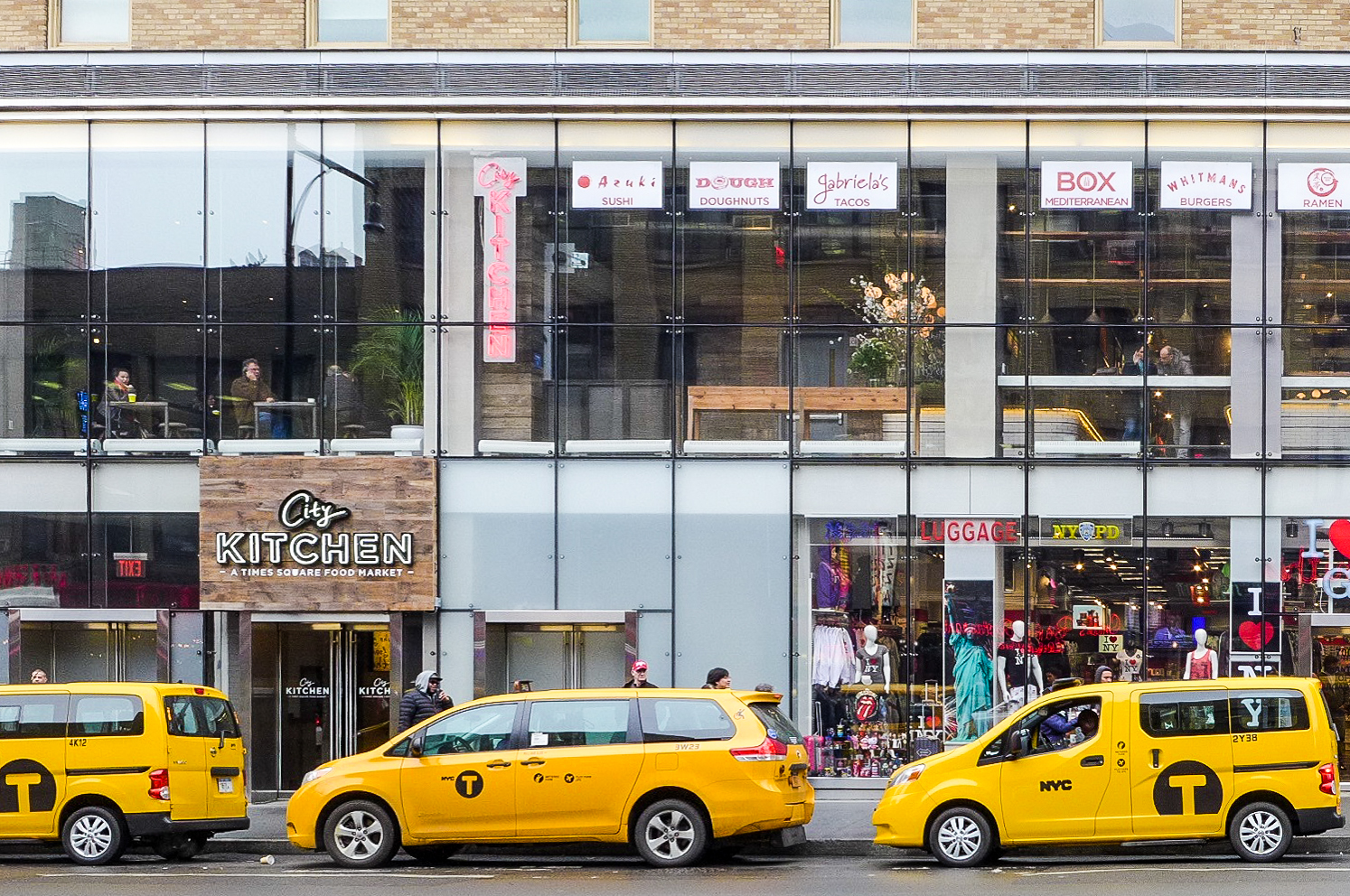 Blitzing the food court just before noon with a couple of friends from California, we tried most of the stalls and kiosks at City Kitchen, attempting to pick the best or at least most representative item at each. The food was generally good, though we had a couple of objections. Right in front — and difficult to get past without buying something — are the luscious doughnuts of Dough, ten selections glistening behind glass. We settled on the Boston cream ($3.50), a modest-sized doughnut by Dough standards mantled with thick chocolate; it oozed yellow custard when bitten into. If you eat one of these by yourself, consider it your entire lunch.

The cheeseburger from Whitman’s (the "Upstate") proved to be similarly compact, a thick patty on a bun of smallish circumference, and quite tasty. At $9, though, the price seemed steep, and the fries were an additional $4 — but oh, those fries! Sienna-colored and salty, they nearly upstaged the burger. I loved the combination, but a friend noted, "This is considerably more expensive than Shake Shack, and not quite as good," while gesturing at the new Shake Shack diagonally across the street. 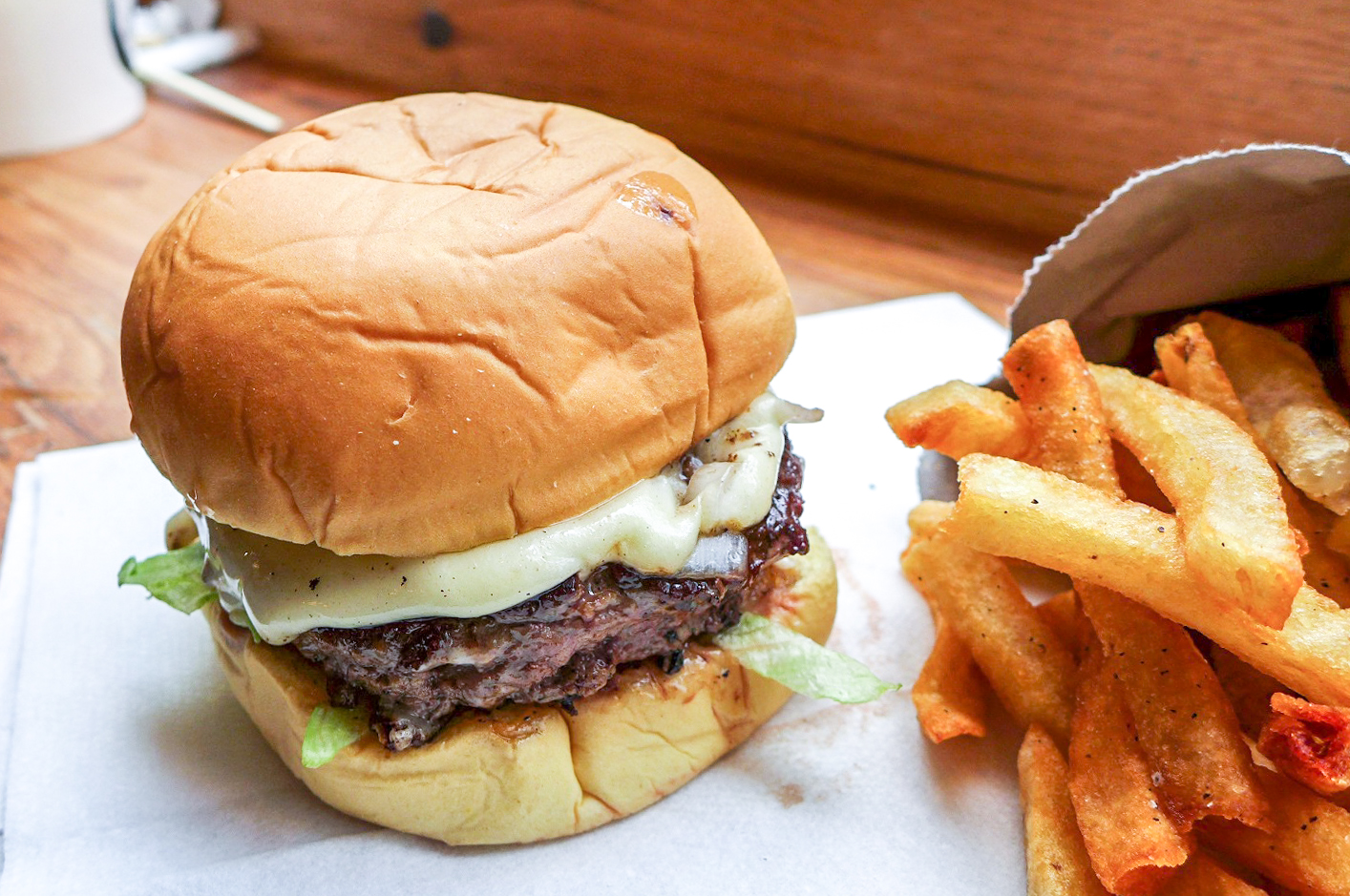 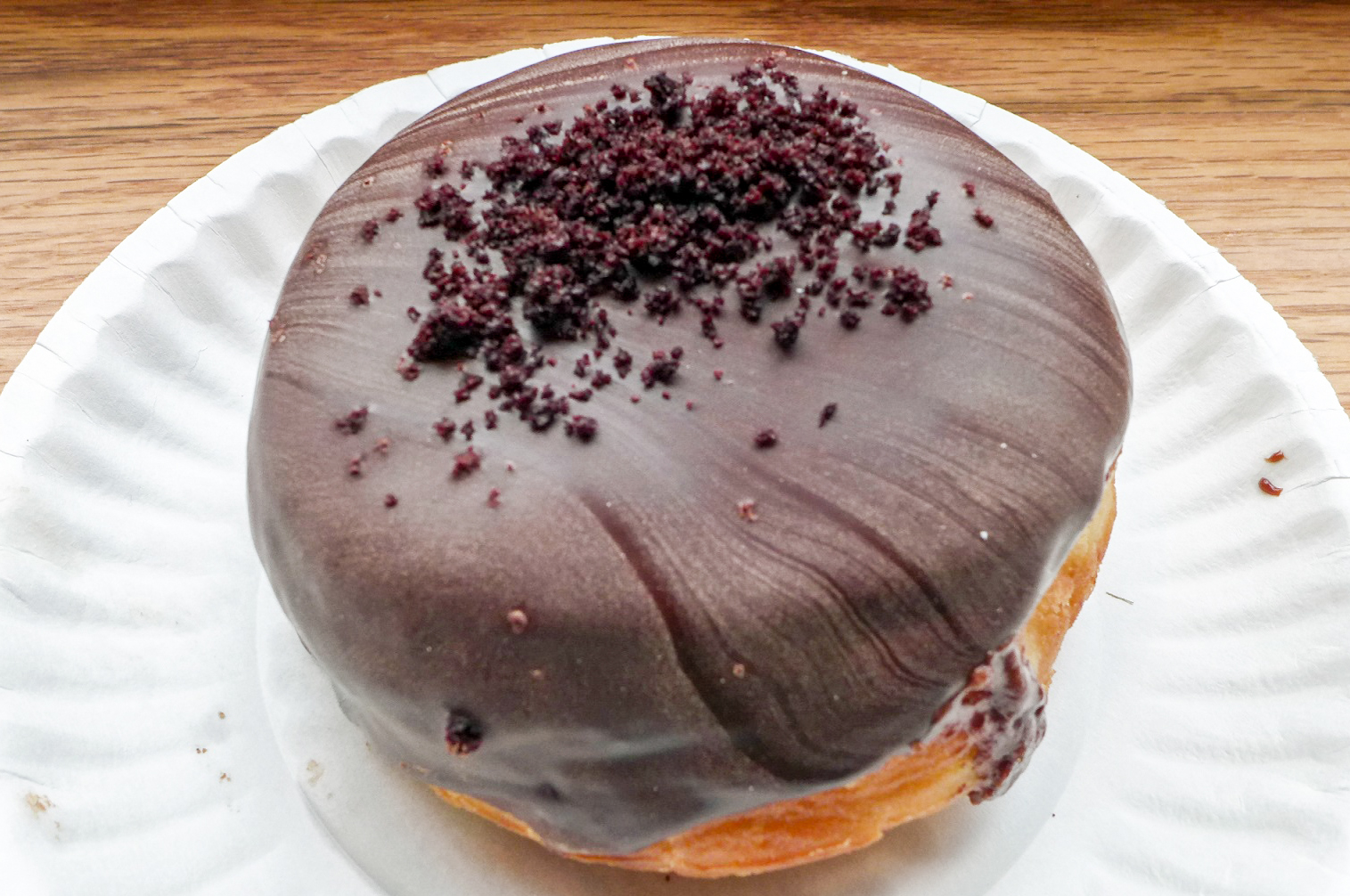 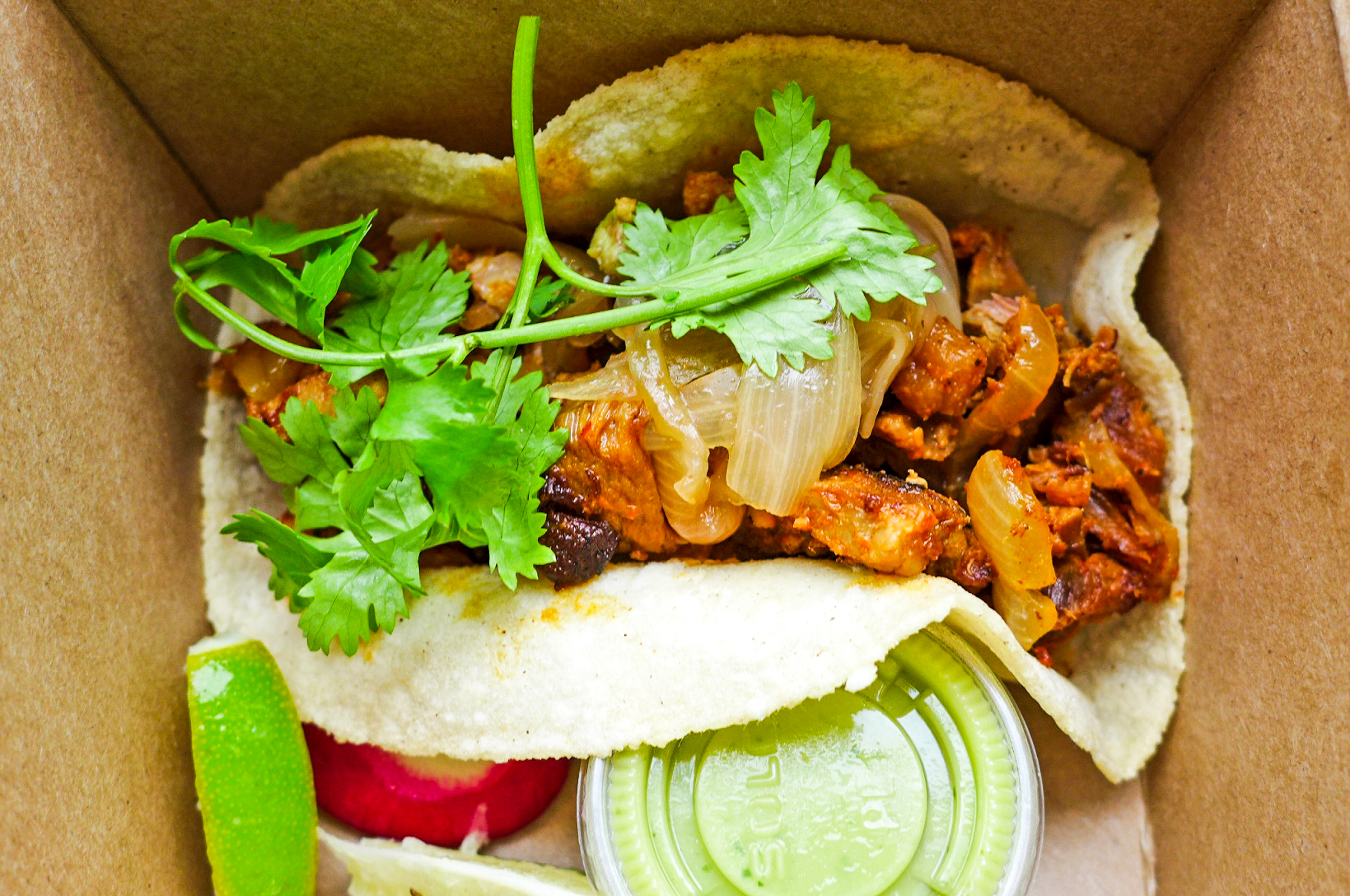 Above: Whitman's cheeseburger. Below: Boston cream from Dough and an al pastor taco from Gabriela's.

Gabriela’s is a taqueria that also enjoys a location right by the front entrance, an offshoot of a well-regarded Upper West Side restaurant founded in 1992 that was a pioneer in bringing regional Mexican fare to the city. It’s an efficient operation with four employees, one of whom seems perpetually engaged wrangling the corn tortillas on the comal. A big lure for me was the breakfast tacos — five in number — that turned out to be unavailable when I requested them around noon (they’re served only from 6:30 a.m. until 11 a.m.). Of four regular tacos available, we chose al pastor, even though no twirling cylinder of pork was visible. Made on smaller five-inch tortillas rather than the standard six-inch ones, a single taco costs $5, but comes nicely stuffed. But the pork was more like carnitas than al pastor, concentrated and fibrous with no sweetness and acid from pineapple.

Next was Box, the project of upscale Lebanese restaurant Ilili. Interesting variations on shawarma were offered, including duck — though at $11.94, (with tax, $13), the price discouraged us. We settled instead for Korean falafel ($7.35). It was a big disappointment. Long and narrow, it possessed few actual falafels, and they were crushed and stone cold. Every falafel stand in town knows you have to fry them fresh in small batches, so why does this place treat their falafels like ice cubes? Also, the un-warmed pita wrap had turned crumbly, causing the whole thing to fall apart once a bite was taken. 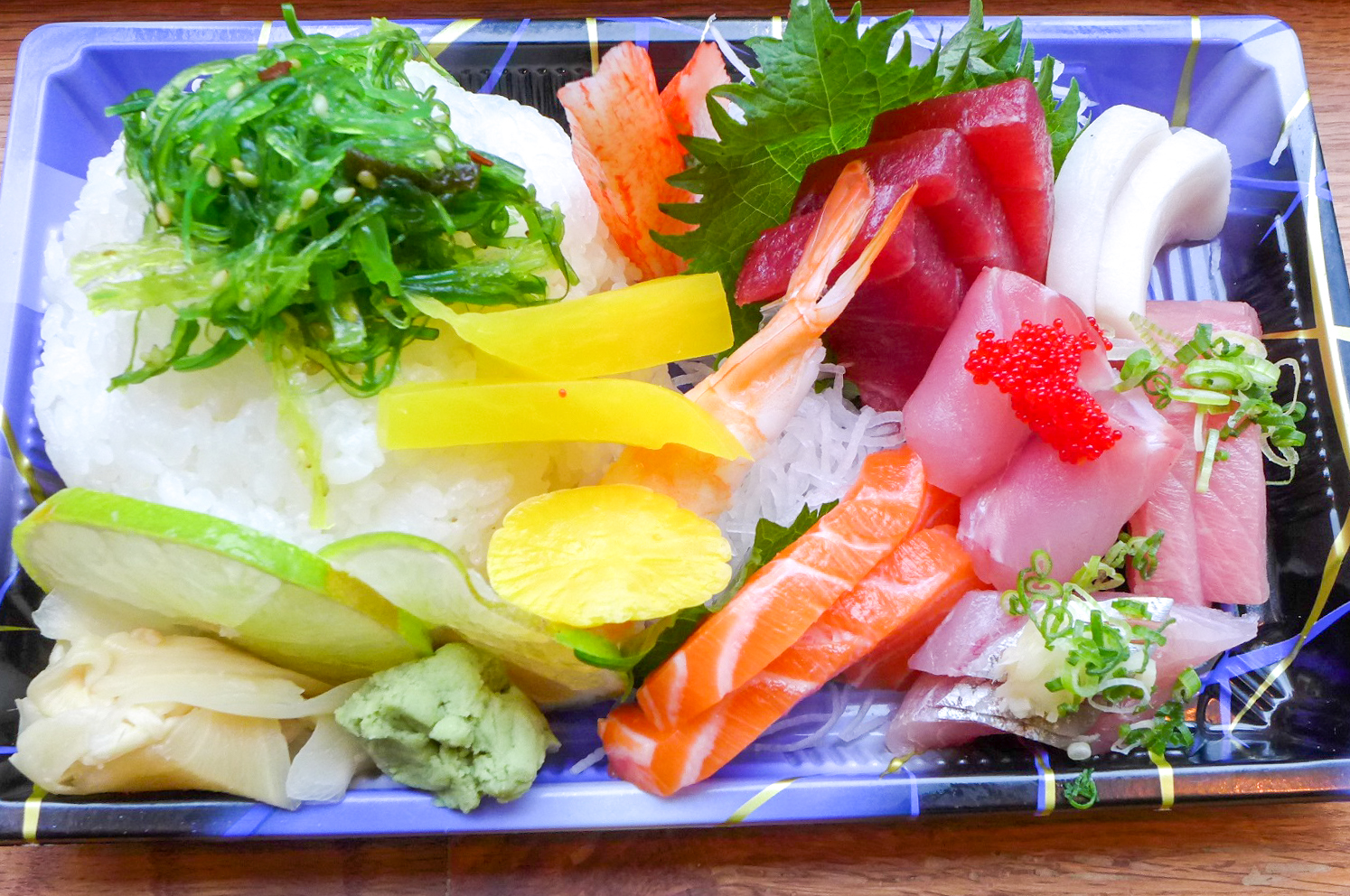 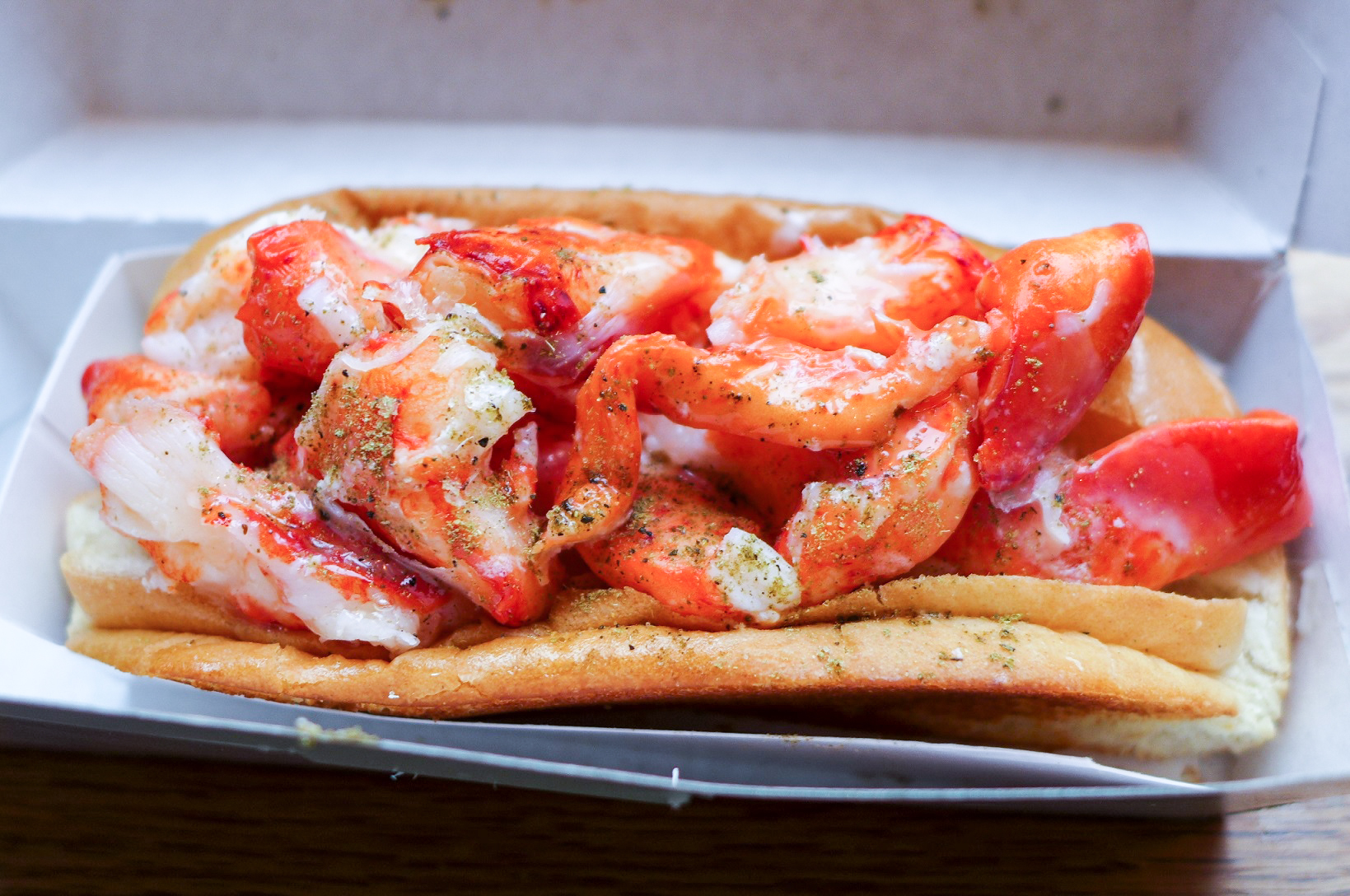 Azuki's churasi and a lobster roll from Luke's.

The free-standing sushi bar Azuki fared better. Opting for something that would check the entire range of fish (which looked fresh in the refrigerated glass cabinet), we picked chirashi ($22), usually the best deal in sushi restaurants. The assortment came in a plastic tray, and included five types of fish plus a couple of crab sticks (surimi), which seemed out of place. The fish was wholesome, perhaps not the highest quality, but perfectly edible, with no off-odors or off-flavors. The place where the stall fell down was in the heap of sushi rice, which was sodden and low on flavor. Also, the price was a couple of dollars more than churashi usually costs in a decent sushi parlor. Why do we pay extra in a food court, when the overhead is supposedly lower? The same thing is also true of food trucks.

The lobster roll at Luke’s Lobster proved small in size, loaded with lobster meat and not a bad deal at $15. It came drizzled with herb butter and, if there was some mayo in there as advertised, it was undetectable. All of which is fine, except the lobster was cold as the grave, and the meat tasted like it had been refrigerated. In other words, it wasn’t fluffy as lobster should be, but dense and frigid. This is the same problem endured at Ilili — the restaurant takes the expedient step of preparing things far in advance, and the raw materials suffer. To be fair, this was also encountered at Ed’s in the Gansevoort Market — refrigerated lobster meat not freshly prepared or even brought up to eating temperature.

The highlight of our extended meal was the ramen from Kuro Obi, an offshoot of Ipuddo. The broth offered is a chicken-pork hybrid in a pleasing shade of yellow. There are three variations not all that different from each other – one squirts spicy miso on top, another, garlic oil, but you really don’t need the extra flavor. The broth is absolutely killer, the pork belly appropriately fatty, the additions modest and well-conceived. It’s a delicious bowl of ramen, but the portion is small. I guess the comparatively low price — $12 — reflects that fact.

But the question remains — if proprietors are enjoying a rent discount by occupying stalls in a food court instead of storefronts, why are servings smaller and prices higher than at stand-alone stores? Certainly the consumer deserves a price break, since food courts reflect a drastic diminution of comfort and service. And also, in this case, the necessity of standing in long lines — and having no assurance you can sit down once you get your food.

What do you think of food courts? Join the discussion in Eater Forums.