Check out the 10 most-read stories on Eater this past week.

Share All sharing options for: This Week's Top Stories on Eater NY

A terrible explosion ripped through 2nd Ave near 7th Street. It destroyed a few restaurants including Pommes Frites, Sushi Park, Sam's Deli, and injured numerous East Village residents, many of whom are still displaced from their homes.

Kum Gang San, a restaurant in Flushing was forced to pay $2.67 in back wages after employees filed suit against the restaurant last year. In addition to the various abuses that made these employees sue, the restaurant has also been fined for child labor violations.

Here's a breakdown of the hottest restaurants to look out for once the weather starts to warm up. This includes new spots from Danny Meyer and Mario Batali and many more.

The Second Ave explosion caused the demise of a beloved, late-night mainstay Pommes Frites. Here are a variety of reactions people had, taken from Twitter.

6) Four Restaurants to Try This Weekend in New York City 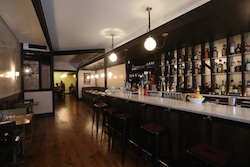 The best restaurants to eat at this weekend include New York's first cider bar, a NorCal themed restaurant, and Robert Sietsema's recommendation for the best place to get dosas. 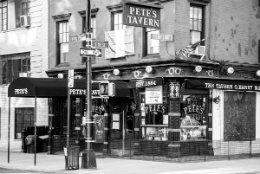 Care to visit the bars where Ernest Hemingway, Ezra Pound, Eugene O’Neill, and E.E. Cummings hung out back in the day? Check out Robert Sietsema's guide.

The Oscars of the food world just released a list of finalists for their awards gala, which will be held in Chicago on May 4. As per usual, New York made a pretty strong showing. 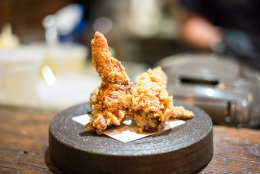 In the latest edition of The Hot Dish, check out Mu Ramen's Joshua Smookler create the city's most labor intensive and time consuming chicken wings. They finished product is stuffed with foie gras, brioche and quince paste.