Contra and Wildair Are the Anti-Elitist Icons of NYC Cuisine

It's this generation's Gramercy Tavern

Share All sharing options for: Contra and Wildair Are the Anti-Elitist Icons of NYC Cuisine

Contra's guest chef announcements arrive on a Twitter feed like a high school battle of the bands flyer, slipped into your locker by that cool kid who convinced you to cut study hall and read Tropic of Cancer under the bleachers. The stylized notices, whose mechanical fonts and faded colors evoke a 1976 algebra textbook, contain little more than a date, an illustration (an angry bear, a headband-clad karate dude), and a restaurant name. A jolt of energy courses through your veins when you recognize the visitor; an even bigger one zaps you when you don't: Souvenir, Septime, Catbird Seat, Taco Maria, Maaemo, Bones, Sudestada, Commis, Fish & Game, In De Wulf. Naturally, you email to request a resy and you’re told that a little over a hundred bucks gets you a tasting menu from a chef whose establishment would’ve cost a thousand plus in airfare and hotels. And this is when you start to realize that behind all the chic graphic design lies one of the city’s most vital restaurants.

Therein lies the importance of Contra on Orchard Street, Fabian von Hauske and Jeremiah Stone's set menu sibling to the a la carte Wildair next door. No other New York culinary institution — except maybe Ssäm Bar — so consistently showcases out of town talent at such reasonable prices; Chateaubriand's Inaki Aizpitarte (under whom Stone worked) swung by this month to serve pork rinds showered in ceviche granita and shelling beans doused in elderflower butter — part of a ten-course repast for $120. And for non-guest chef nights, (which, alas, are most nights), the kitchen charges just $67 for an edgy, foamy, seven-course affair, a heck of a deal in a year that’s seen oodles of new venues where dinner for two will easily hit $500.

Haute cuisine is, by its nature, among the most inaccessible art forms. An opera aficionado can download Pavarotti’s 1978 Tosca performance for $20 on iTunes. An art student can peruse Picasso’s blue period via Google image search. But a young chef will have a heck of a time enjoying Grant Achatz's modernist cookery without visiting Alinea and plucking down $700 on a dinner date. And while none of this is to discount the importance of empiricism outside of cuisine (better to step inside Philip Johnson's glass house than view it from your buddy’s Facebook feed), with food you actually have to be there. You can’t eat via the Internet. Further limiting is the fact that the gastronomic game is a zero sum; your enjoyment of lemongrass-flavored ants at Noma (where von Hauske worked) will detract from someone else’s because the chefs there can only forage for so many insects, and because the restaurant only has so many seats.

Perhaps these realities don’t register to full-time Instagrammers who crisscross the globe and eat still-beating reindeer heart every September at Fäviken, but for a knowledge-hungry cook earning $29K a year, a freelance food writer who doesn’t want to ask for a media rate, or an everyday eater who wants to expand her horizons, Contra’s guest chef dinners (and everyday dinners) are an essential alternative, a way to make an elitist playing field just a hint more democratic, a sign that it doesn't have to be tasting menus for the well-heeled and a la carte for everyone else. Think of Contra, with its brick walls, bare tabletops, and walk-in friendly ethos for prix fixe affairs, as culinary community theater, except with the actual pros at the helm.

An up-and-coming sommelier would agree. On a late October weeknight Contra poured 6+ biodynamic Domaine Matassa wines — tough to find Southern French blends that just as easily recall a floral Alsatian gewurtztraminer as a smoky Mexican mezcal. The charge? Just $43 to match with that night's menu, which included a monkfish roasted to the texture of a warm marshmallow and slathered in a bonito foam. Gorgeous.

Scallop with celeriac and pear and blackberry parfait

Sometimes Contra's food is visually precise. Slivers of white squid with black ink puree and yuzukosho greens would fit right in at the two Michelin-starred Aquavit. A scallop cut into the shape of a candy bar is an arresting rectangular alternative to the mollusk's circular comfort zone; even better is the accompanying scallop froth and coral shavings, which impart the entire preparation with a powerful oceanic musk. And then there's a single slice of tomato, edible still life in a tart bath of leche de tigre.

Sometimes the chefs are more relaxed in their platings. A collection of cherry tomatoes is haphazardly placed, though the concentrated tomato compote beneath is not. It sucker punches the palate with its agrodolce oomph. Mangalitsa pork is less about wowing the eyes as the palate; the meat's natural earthiness is revved up by shavings of piney matsutake. And von Hauske's brilliantly straightforward desserts, from almond ice cream topped with macaron crumble to a juxtaposition of passionfruit semifreddo and chocolate sorbet, would feel just welcome at an ambitious kitchen as at a ballpark.

A few minutes into a meal at Contra, I watch Stone do something rare for a chef: He leaves the restaurant mid-service — through the main entrance, no less. Later on in the evening, von Hauske scampers off too. And so does the beverage director. Do not be alarmed. They are checking in on Wildair, their months-old small plates place two doors down, one of those shouty joints where self-serve silverware is stored beneath the tables and where just a single item rises above $20.

The menu is less experimental and changes less frequently, which means you can pretty much count on seeing crimson radishes atop seaweed butter, as flavor packed as good matcha, and tuna bruschetta, an easy candidate for dish of the year. The kitchen takes raw yellowfin belly, cuts it with Korean chili flakes, tops it with sesame, scallions, and tomatoes, and then places the whole shebang over grilled bread. It's a spicy tuna roll, the bane of sushi purists, transformed into toast, the oft-mocked lifestyle choice of people who brunch in 2015. If the concept reeks of Dada-esque self-awareness, the execution is pure deliciousness: crystal clear notes of fish oil and spice, begging for a funky glass of sparkling rosé. It's not a dish you'd expect at the fancier of the two venues; this one is 100 percent Wildair.

Above: Georgia shrimp with garlic and pimenton and spicy tuna toast; Below: Peanut chocolate tart

It's about at this point that the aroma of secondhand weed starts to fill the dining room, the downside (or upside) of open-air windows on Orchard Street. I look at the sommelier with a raised eyebrow and he doesn't miss a beat. "Not me." Of course not. And it's amid this haze when it all becomes clear: Wildair and Contra, taken together, are a ragtag riff on Danny Meyer's dual-purpose Gramercy Tavern, an a la carte bar space and a tasting menu hangout physically separated by just a few meters and what was once a short-lived eclair factory — bet von Hauske could've made that work.

Taken together, they are a ragtag riff on Danny Meyer's dual purpose Gramercy Tavern, an a la carte bar space and a tasting menu hangout physically separated by just a few meters

Mangalitsa pork rilettes, capped by a layer of fat, dissolve on the tongue with little more resistance than foie gras terrine. Cool cranberry beans, by contrast, are as dense as beef, with a rich herb tahini acting as the de facto maitre d'hotel butter. Head-on Georgia shrimp, poached in their own shells with garlic and olive oil, are the working person's answer to expensive langoustines. Beef tartare matches Estela's in its umami-rich elegance: Piedmontese top round gets amped up by a crack mix of pimenton oil, horseradish, buckwheat groats, and smoked cheddar shaved with as much abandon as white truffles at Per Se. And Mishima Wagyu ($85) is one of the finest new steaks in the city; the kitchen slow cooks the flesh in fat before imbuing it with a proper sear. No blue cheese funk here, just a clean bovine tang and a silky mouthfeel.

Does any of this come close to upstaging the inventive progression of dishes at Contra, a riskier venue that pumps just as much Phoenix through the sound system? Of course not. But then again, upstaging isn't Wildair's game. It's satisfaction, with a few refined twists, a place to hop in for a glass of wine and a thought-provoking bite (or a traditional plate of schnitzel). And it serves as all the more proof that von Hauske and Stone are as poised as anyone since the Major Food Group to upend our collective notions of New York dining at every level. Except with these guys, the prices are just a bit more in check.

Our review of Contra 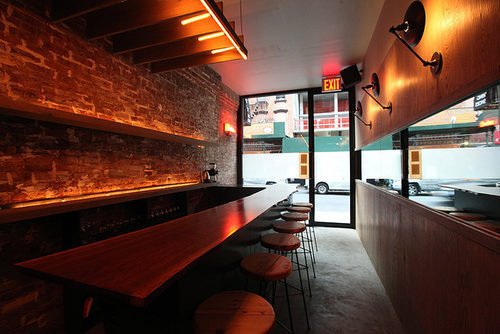 Bonus tip: If the wait is long, grab a drink next door at Contra.

Bonus tip: If the wait is long, grab a drink next door at Contra.