Jake Dell talks deli and how to keep an icon alive.

Share All sharing options for: How Katz's 27-Year-Old Owner Is Keeping the Icon Alive and Slicing 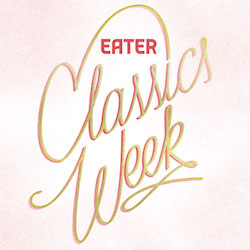 On a chilly Wednesday morning Jake Dell, the lanky 27-year-old owner of Katz's Deli is sitting at a table with his uncle, sampling slices of pastrami from an out-of-town competitor. Despite the deli's strong reputation, Dell is unimpressed. "I'm very picky when it comes to pastrami and corned beef," he says. "There are times where I've had our own, and I'm like ‘I don't like this' because I want it to be better. I always want it to be perfect." Dell samples his pastrami and corned beef ("at least a bite") every day.

Dell is perhaps the youngest owner and operator of any classic New York dining institution, which has caused some challenges, but ultimately helped the deli reach its 127th year. Dell talked to Eater about changing his name to Katz (or Deli), the future of the icon, and his favorite diner of all time.

Check out a day in the life of Dell in 33 photos over here.

I was actually thinking about legally changing my name to "Katz," but no. Or to "Deli." Either one would work.

Jake Deli...?
My grandfather and my father and my uncle were part of the business, and took it over from the Katz family about 30 years ago, when the last of the Katz members said "You know, I don't wanna do this anymore." They were in their third generation at that point, and there wasn't that same interest.

Half of what I do is make sure that it stays classic.

Long story short, my grandfather was in the mix at that point, and he said "Okay, fine, you guys want out? I'd like my son and my uncle in, if you want to sell it to them..." I grew up here, I've been here my whole life. I had my birthday parties here.

Katz's is thought of as a place where nothing changed. But things have changed. There certainly wasn't a Philly cheese steak on the menu when it opened 127 years ago.
Our most recent item is the pastrami reuben. We added that five years ago. We change every once in a while. The truth is, reubens aren't even a deli sandwich, it's a bullshit sandwich. You would never have meat and cheese together on a sandwich at a Jewish deli. We didn't even have cheese at all in this deli until 40 or 50 years ago.

Over the years people want to ask for things, they want to tweak things, like, "Oh, actually can I get this with this?" And if people ask, we'll do it. Enough people asked for reubens, so we did a reuben, how hard is it? We had the sauerkraut. The big move was getting cheese.

What would you never change?
Just about everything here. The look and feel of the store can never change. People come in here not just for the food, but for the atmosphere and the nostalgia. If you tweak the walls, the smells — Katz's is no longer Katz's then. So, half of what I do is make sure that it stays classic and make sure that people still have those nostalgic moments.

What does that involve?
It's little things. There's a lot of wear and tear here. Say the brass rail up front, overtime, it needs this or it needs polishings or it needs fittings, but you do it in a way that maintains the look and feel of the store the same way that it was back in 1949, which is actually when this construction finished. It's looked like this since 1949. The whole front part of the store [on Houston Street] that you associate with Katz's was an empty parking lot.

So, it's the little things, right? Things that maintain the look of 1949, you look at those neon signs, those are from the 50's.

The pictures are so iconic. Are you still adding ones to the walls?
Those are somewhat new actually, in the grand scheme of things, about 30 years old. It's kind of got a life of its own sometimes. It's somewhat of a mish mosh of pictures, you can see half of them are crooked, which drives me a little nuts, but I think it adds to part of it. Some are mislabeled.

We have this Israeli girl working here and I was going around trying to help her label things. So, I'm like "Okay, so that's Joaquin Phoenix" so she made a label for that and spelled "Joaquin" W-A-K-E-E-N, I was like "That's fantastic!" And I really want to keep that because that's really funny.

So, yeah we don't really change much from the front of the house. Sometimes there are better ways to do things back of house... I just finished getting my MBA from NYU, so there's back of house stuff that we've changed, inventory type of things or accounting. Things that just honestly make sense after the last change was 30 years ago. That doesn't change anything when it come to Katz's though. It doesn't change the look, the feel of the store, the taste of the food, of the interaction between customers and the cutters, it doesn't change any of that.

A lot of these guys remember my bar mitzvah or, even worse, they remember me in diapers.

You grew up here, but how did you learn to run the business?
My father was kind of inadvertently training me like as a kid. We had dinner together every night and my father would say this happened, and a customer did that. "What do you think? What would you do?"

To be honest it became a natural transition, because I kind of felt like I had seen everything by talking through everything, through real things, not just business school hypothetical stupidity situations.

But, how did you end up running Katz's?
I was pre-med and I was positive I was going to go down that route. I had taken the MCATS and I was applying to med schools and the idea was to do a gap year. I was 85% certain I wanted to be a doctor, but 15% of me was like Katz's is in the back of my head because I grew up there....The least I can do is give back. The least I can do is give a year of my life to my father to help out wherever I can that. And that was what, six years ago? I haven't looked back. I withdrew my applications from med school.

Are your dad and uncle still involved in the deli?
Yeah. My dad was here this morning for breakfast. I never want them not to come in. I get to eat with them and hang out with them. I don't think you ever fully retire from the deli business, you just hopefully have less stress about those things.

What are the particular challenges to being so young in a business that's been around for so long?
I definitely think initially there was some resistance because I am my father's son, I'm my uncle's nephew, or my grandfather's grandson. A lot of these guys remember my bar mitzvah or, even worse, they remember me in diapers.

But, at the end of the day, they hopefully see that I have the best intentions for this store and I want it to exist for the next 127 years, so people are on board with that. I think that what was initially a challenge is actually my strongest suit. I'm young, and I plan on being here a long time. So that's something they can rally behind.

In the past six or so years, there has been a deli renaissance of sorts. All of these nouveaux delis have popped up. What are your thoughts on that?
I love it. I love everything about it. I don't ever want to see a deli in New York go out of business. I don't want to see any of the big name guys go out of business because it's good for everybody. There's plenty of business to go around. As long as people are talking about deli, writing about deli, thinking about deli, I'm happy. You know what? Let other people do the artsy, nouveaux stuff, fancy stuff, and then come and try the real thing with me. Come and try the traditional food and let me teach you what it's supposed to be like, what it was like 127 years ago when delis first started, because there aren't a lot of places doing that.

Speaking of people who come here to eat, do you have any particular favorites?
Yeah, I have one. This 94-year-old little very frail, very sweet woman was here.... She says "I remember coming here. We used to come every Sunday. Our treat was to come here at the end of the day. I would come with my three sisters and we could split a sandwich four ways and that was our treat from the money that we had earned from selling stuff.

She's crying and says "My sisters have all since passed away and I'm the last one and everytime I come here, I think about them and it just brings me right back. So this is my favorite place in the world."

Are you fucking kidding me? Like how do you...I don't know what to say to that. She had me on the verge of tears. I wanted to just like hug her and say: "You're home."

She's since grown up and gone other places and done other things, but this has not changed. That's why i didn't want to change anything, because of moments like that when customers are so emotional about it, it's amazing, it's sweet and amazing.

She asked: "Can I just get a quarter of a sandwich?" I love her.

The thing is that's one story. Or, even my story, that's just one story. There's thousands of Katz's stories.

I don't think you ever fully retire from the deli business, you just hopefully have less stress about those things.

One last question. What is your order at Katz's?
Pastrami on rye, little bit of mustard, side of latkes and then here's the thing, I either get a chocolate egg cream or black cherry soda and I can never decide which one I want more. And then the problem is, if I'm ordering the egg cream and I see the hot dog there, I'm probably going to have a hot dog too, and then I'm going to want to explode because I've eaten so much afterwards.

What a day in the life of Dell looks like, in 33 photos.