For the last few years New Yorkers have been obsessing on Isaan food from Thailand's impoverished northeast, an area dominated by the Mekong River and influenced by the neighboring cuisines of Laos and Cambodia. Its most prominent contribution to the Siamese menu are the shredded green-papaya salads called somtams, but there are also beef and pork jerkies, ground-meat salads, an appreciation of sticky rice, barbecued chickens, and stir-fries highlighting river catfish, duck, and pork.

But gradually, the Isaan fare found in the East Village, Woodside, Elmhurst, and Red Hook is giving way to food from the three other culinary regions of the country: the Chinese-influenced, noodle-heavy north; the curry-heavy central region, anchored by Bangkok and also showcasing sour soups and basil-bearing stir fries; and the south – 14 provinces arranged along the Malay Peninsula, characterized by high country, jungle, and tourist beaches. There, the food can be even spicier than that of Isaan.

One of the first restaurants in New York to concentrate on southern Thai food is Kitchen 79, a new spot in Jackson Heights in the shadow of the 7 train, in a space that once held Arunee Thai. (That cafe, famous for its fried quails, has moved a block north to 37th Avenue.) Noticing the collection of unusual regional dishes on Kitchen 79's menu, some rarely seen before in the city, the wiry and diminutive proprietor was asked where she came from in Thailand. "I'm from Bangkok, but I can't cook. I just eat. But I've got two chefs working for me in the kitchen, one from the northeast and one from the south." 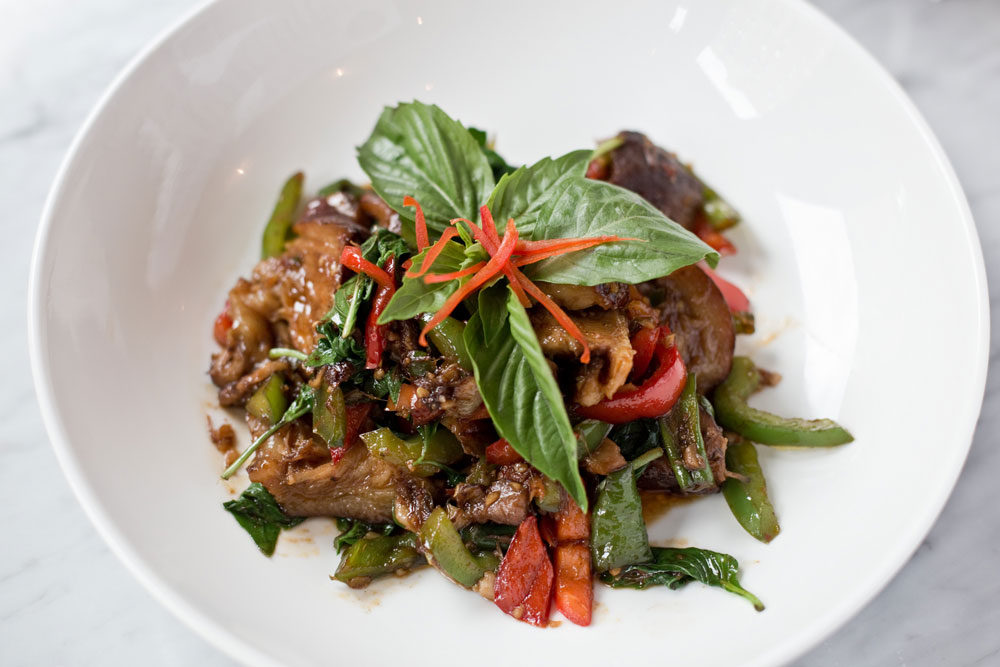 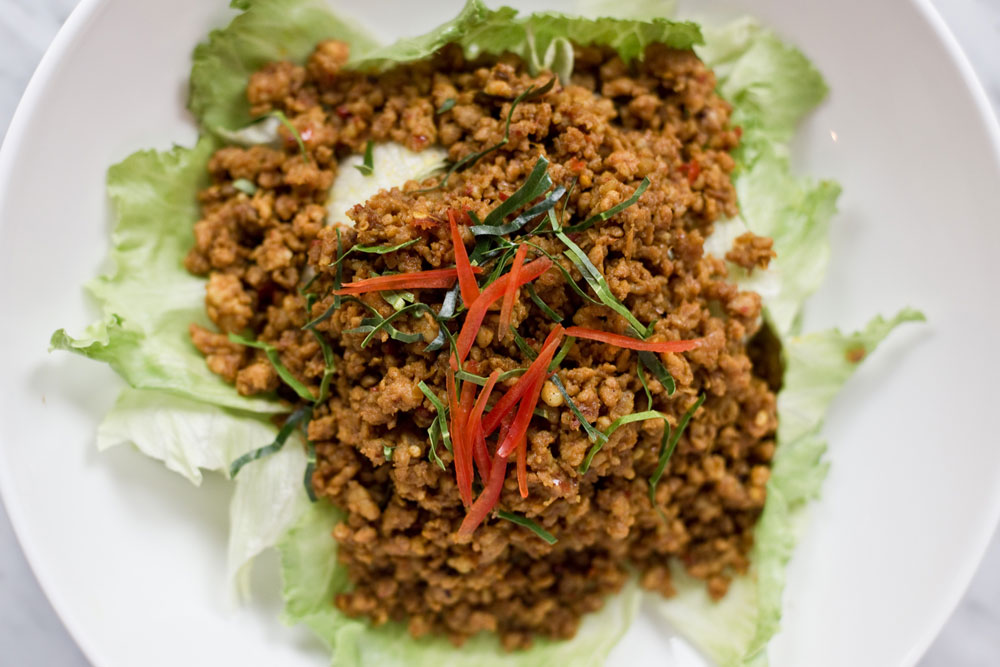 Typical of southern Thai food at Kitchen 79 is gaeng tai pla ($13), a dark and brooding fish curry heavily accented with chiles. Distributed throughout are nicely cleaned shrimp and little shreds of mackerel, which impart a powerful fishy flavor, while tart tamarind turns the broth brownish. The stew is also vegetable heavy, bobbing with pumpkins, bamboo shoots, and string beans. What are those striped globes that look like miniature watermelons? Thai eggplants. This strange and salty curry demands to be consumed with plenty of rice. One bite and you'll wrinkle up your nose; by the second you may or may not love it.

Kua kling is a curry that undermines all our ideas of what constitutes a curry.

Similarly spicy, but not so fishy, is kua kling, a dish that undermines our ideas of what constitutes a curry. The recipe is typical of the unusual dry curries of southern Thailand. Instead of being mixed with sweet coconut milk, the ground pork (or beef or chicken) is cooked in a curry paste with a small amount of water, along with lemongrass and kaffir lime leaves, until the meat turns damp but not soupy. The accompanying cucumbers and lettuce are used to scoop up bites, serving to partly staunch the burn. Though kua kling outwardly resembles an Isaan larb, the dish is much more variegated in its flavoring.

But not all the curries from this region are spicy. Showing the influence of Indian food on southern Thai, gaeng massaman (the second word is a corruption of "Muslim") is a mild curry of beef, potatoes, and peanuts principally flavored with onions and coconut milk. Mellowed with turmeric, yellow curry (gaing karee, $10 to $13 depending on principal ingredient) is also tender to the tongue, and unspeakably rich. Malaysian and Indonesian fare also inform the food of the southern region. Maybe you'll be surprised to hear there's a version of Malaysian roti canai called roti panang nuea ($7) featuring the same flaky pancake. But instead of the soupy chicken curry that usually comes alongside, there's a more substantial serving of a coconut-thickened beef stew that will remind you of Indonesian rendang. 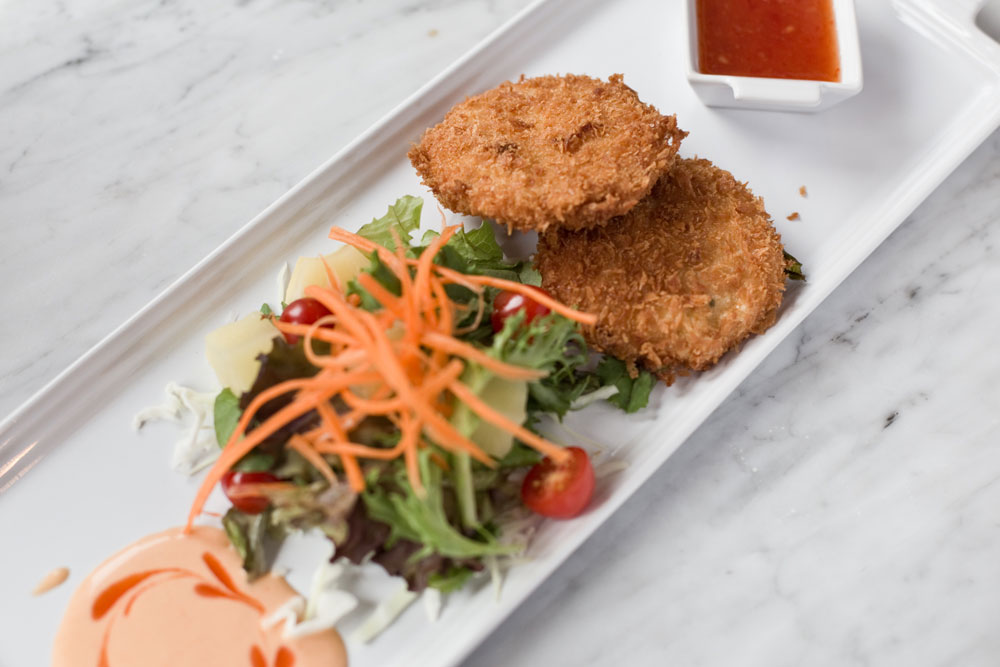 Other apps are similarly lively. You've never eaten bigger or better curry puffs ($4) – three hefty crescents of puff pastry stuffed with poultry that may owe something to the early Dutch colonial presence in the region; then again they may be Spanish or even British in origin – they look like Cornish pasties. Part of the lure of Southeast Asian food is its wild mixture of influences, aboriginal, colonial, and modern international. Other delectable southern Siamese snacks include deep-fried shrimp cakes and chicken wings lacquered with turmeric and fish sauce.

What about the Isaan cook laboring side-by-side with the southern cook in the kitchen? He rocks the green peppercorns – which look like little trees – in several notable recipes, including a stew of wild boar called pad ped moo pha ($13), which might be one of New York's hottest dishes. It left one of my guests hiccupping after a few bites. Another northern dish worth ordering is ka prow ka moo, a thick slurry of pork knuckle, fiery fresh chiles, and basil in a thick sweet soy sauce. It's so rich with pork fat that even after blotting your lips afterwards you'll still feel like they've been injected with Botox.

Kitchen 79 has unusual décor. Instead of rustic ethnographic gee-gaws and tubs full of artificial flowers, it's made up to look like a 70s disco, all stark black-and-white surfaces and hanging glass sculptures. Get up and dance!

Our review of Kitchen 79

Cost
Full meal for two, including two apps, one curry, and a noodle dish, with tax but not tip: $40
Sample dishes
kua kling moo (southern Thai dry curry), ka prow ka moo (spicy pork knuckle stir fry), gaeng massaman (mellow beef curry with coconut milk), som tum poo dong (green papaya salad with raw crab), khao phad gang kiew wan gai (green curry fried rice with chicken), curry puffs
What to drink
For now at least, despite the bar at the end of the room, it's BYOB. The bodega across the street sells beer.
Bonus tip
Make sure you state your preference for spicy food, and the hostess will oblige. She'll also tell you which dishes are naturally not spicy, and steer you toward those if you want.

For a Sunday Meal, a Roast Is Better Than Brunch