David Waltuck's Élan: It's No Chanterelle but We'll Take It

Share All sharing options for: David Waltuck's Élan: It's No Chanterelle but We'll Take It

Once upon a time, New York restaurants were a fairy tale world of conspicuous consumption. Investment banks had funny names like Bear Stearns and Lehman Brothers. And hedge funders feasted at fancy pants spots like Veritas, where bottles of Screaming Eagle and Lafite Rothschild commanded more money than tuition at SUNY Binghamton. Then, in 2008, the financial crisis hit. Veritas shuttered in 2013 and became Élan in June, selling affordable duck burgers and confining the majority of its wine list to bottles under $105. The place is packed every night. The end.

The lesson is this: six-and-seven-digit wine buying — at restaurants at least — is now largely a thing of the past. Cru, another haven of oenophilic extravagance during the gilded aughts, closed in 2010; that space is now Claudette, a Provencal joint for $13 ratatouille tarts and $10 rose sangria. And while no one can predict what kind of over-the-top opulence might reappear in our city's hospitality industry now that new skyscrapers (with their $90 million penthouses) are rising along Central Park South again, I like to hope that Élan and other honest, everyday places will be around for longer than restaurants where oligarchs drink $19,000 bottles of Petrus.

There's a good reason the smart money's on Élan. David Waltuck, the chef, has been at it for longer than The Simpsons. The pioneer opened Chanterelle in Soho in 1979, moved it to Tribeca in 1989 and saw it thrive for three decades. It was a fine dining spot that would, along with Drew Nieporent's Montrachet, help establish downtown not just as a destination for fine dining but for fine living as well. Chanterelle's menus were handwritten (in English, no less) and there was no dress code, a stark contrast to jacket-and-tie joints like Lutece, La Caravelle, and La Côte Basque. Such policies all helped usher in an era of more relaxed haute-gastronomy that everyone from Gramercy Tavern (across the street from Élan) to Craft (around the block) owes a bit gratitude toward. 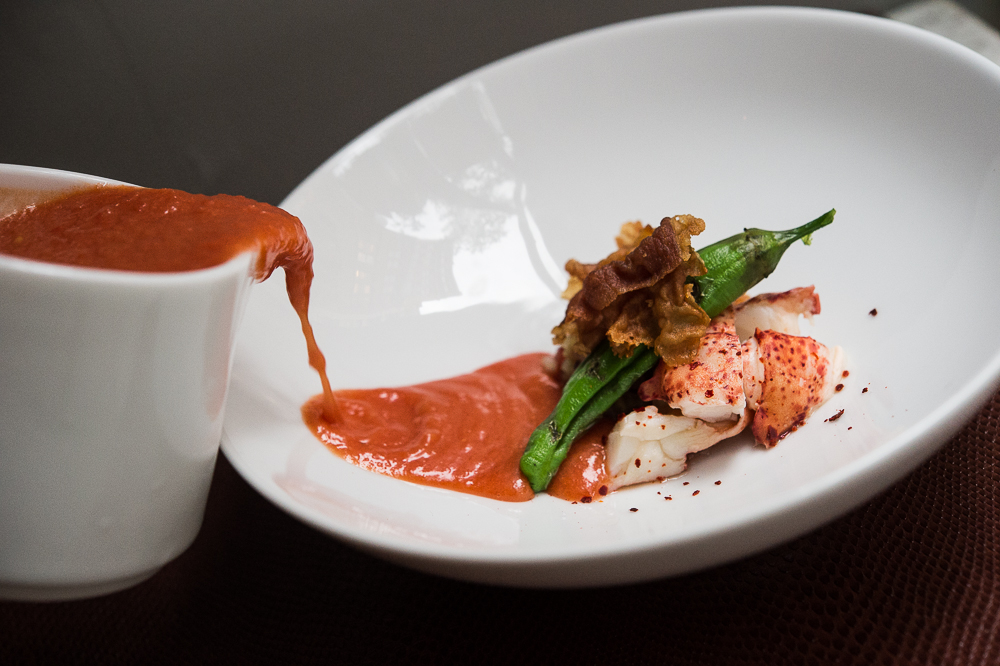 Chanterelle closed in 2009, but Waltuck has brought back some of the classics to Élan, along with his old general manager, George Stinson (now co-owner), who might serve you Chanterelle's famous seafood sausage himself. The link is a blend of scallops, lobster, shrimp, and bass mousse drenched in beurre blance. No, it doesn't have springy texture or head-turning clarity of flavor as April Bloomfield's better version at The Breslin, but it gets the job done. Pair that with a nimble $18 Alvarinho, a half-dozen fried or raw oysters (the latter are slightly over-sauced with a ginger mignonette), and you have yourself a light, civilized, and not terribly expensive meal.

Will you have inspired food worthy of conversation in culinary circles at Élan? Maybe. Or maybe not. The menu is pocked with snoozers like under-seasoned vegetables with yogurt-feta flan, bland chicken breast in a saccharine corn miso broth, and ho-hum zucchini blossoms. But Waltuck, for the most part, dishes out serviceable fare at reasonable prices — no starters over $19 and no mains over $35. I'll take it.

Waltuck, for the most part, dishes out serviceable fare at reasonable prices.

Restaurants of course are about more than just the food. They're gathering places for like-minded people, and occasionally those of a certain age. So here it's worth noting that Élan, like Nieporent's Bâtard, attracts a more "adult" crowd that one might find at say Empellon Cocina or any other trendy East Village culinary establishment. Sound levels are unusually subdued. Cushy dining room seating is set aside for that increasingly rare policy that my seniors still like to abide by — making reservations. And the bar room for walk-ins boasts soft seats with lumbar support.

The irony is that one will easily encounter New York restaurants that are both pricier yet less comfortable (and a heck of a lot noisier) than Élan. If Chanterelle was a bellwether in loosening the strictures of fine dining, Waltuck's new hangout is a reminder not to take that loosening too far, even at casual spots.

Coarse terrine, an old-school favorite, is forever relevant here with its rustic flavors and gently cool temperature; so many restaurants over-chill their terrines. The potato potstickers, essentially a plate of large, potato-filled pierogis, justify their $18 price tag via a generous shaving of summer truffles. And lamb two ways is a show-stopper, a mix of grassy loin, rich jus, and heady ground meat in the form of moussaka 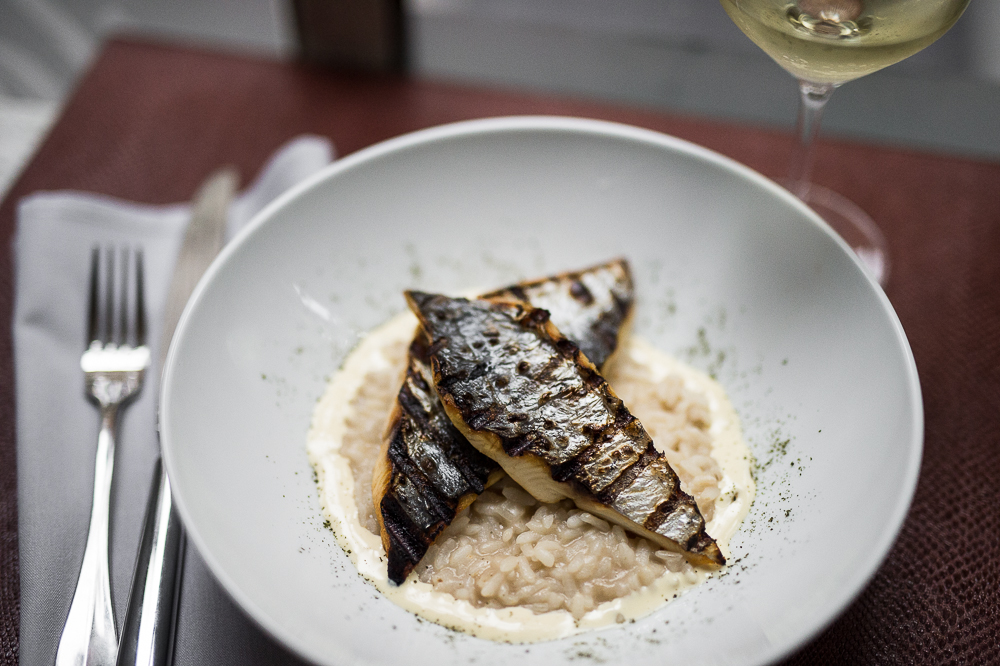 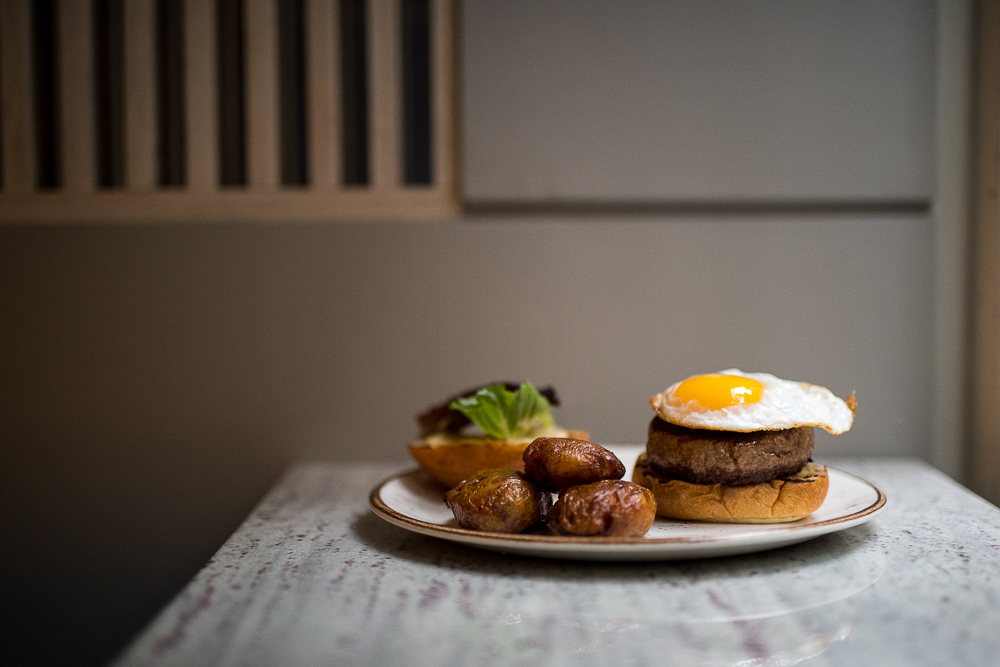 Then things take a turn for the worse. General Tso's sweetbreads offer up overcooked organs and a diluted riff on the already average flavors of Chinese-American takeout. Foie gras lollipops somehow take regal duck liver and, thanks to a hint of under-seasoning and perhaps a bit of oxidation, render the product nearly indistinguishable from peanut butter. Clam-dashi risotto with yuzu is firm and fragrant, but the mackerel on top is a dry, under-salted, sorry affair — and are we really garnishing good risotto with giant slabs of protein in 2014?.

Fettucine with scallops, with no compelling sauce to tie the affair together, would have barely passed muster at an all-you-can-eat Vegas buffet. And that duck burger is just so-so, a tender grind without the same depth of flavor as better beef or lamb patties around town. 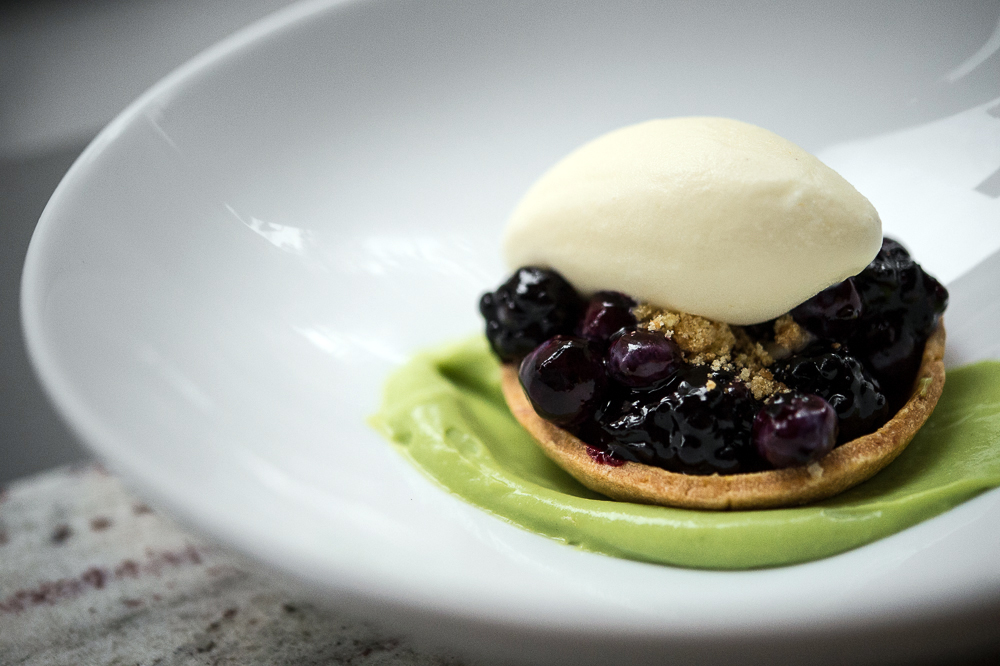 No matter. Order correctly and you're in for a treat. Vadouvan-spiced salmon sports that deft balance between good oil and a subtle smoke. And desserts are beyond reproach, from a blackberry tart with a sweet corn shell to a He-Man sized sundae of intoxicating stone fruits. No, the food isn't as exciting or even well-thought-out as at some of the city's more ambitious mess halls, but I like to think there's a larger moral to this story. Restaurants like Élan that serve great wine and decent enough food at non rip-off prices will never go out of style. Remember, kids, Waltuck and Stinson have been doing it right longer than many of us have been alive.

Our review of élan

Cost
Easily under $100 per person.
Sample dishes
Oysters, seafood sausage, country terrine, duo of lamb, tea-smoked salmon.
What to drink
Like at most restaurants, cocktails are ghastly. Choose from 17-wines by the glass, with the most expensive being a $25 Champagne (Pierre Moncuit).
Bonus tip
Book prime-time tables at least a week in advance. Bar seating for walk-ins. Lunch will start soon. Expect a banh mi, baby.

A Ritzy Tavern Doubling as an Art Gallery Opens in Tribeca