The word "yakitori" in Japanese translates to "grilled chicken" in English. Which is why Tori Shin is charring forty different arrangements of skewered free-range Jidori chicken at its Upper East Side home on First Avenue between 64th and 65th Street. It would be fair to say that the restaurant was a welcome addition when it launched a decade ago, and it's still a welcome addition, not just to the Upper East Side but to Manhattan as a whole. That's because this is the city's only yakitori specialist that offers an omakase-style (or chef's choice) dinner dedicated to perfectly cooked skewered meats, ocean animals, and vegetables. Surprisingly though, for a restaurant that has had a Michelin star since 2012 (and will most likely receive one again in the 2015 guide), New Yorkers seem to be unfamiliar with the place, perhaps because of the restaurant's age or locale.

Head chef and general manager Atsushi Kono has been ensconced at Tori Shin since day one. Though his parents are in the fish business, and he attended culinary school in Tokyo, Kono had never before cooked yakitori prior to opening Tori Shin. He had, however, studied Kyoto-style kaiseki, which taught him a multitude of cooking techniques that manifest in Tori Shin's omakase.

Tori Shin's owner Shu Ikeda hired Kono in Tokyo and then brought him over to New York to cook and help run the place. While Tori Shin is presently Ikeda's only restaurant, he did operate eateries in Tokyo at one point, and learned the art of yakitori cookery at Toriyoshi, a highly respected group of five omakase yakitori restaurants in the Tokyo area, the first of which dates back to 1980. Toriyoshi is the inspiration behind Tori Shin. 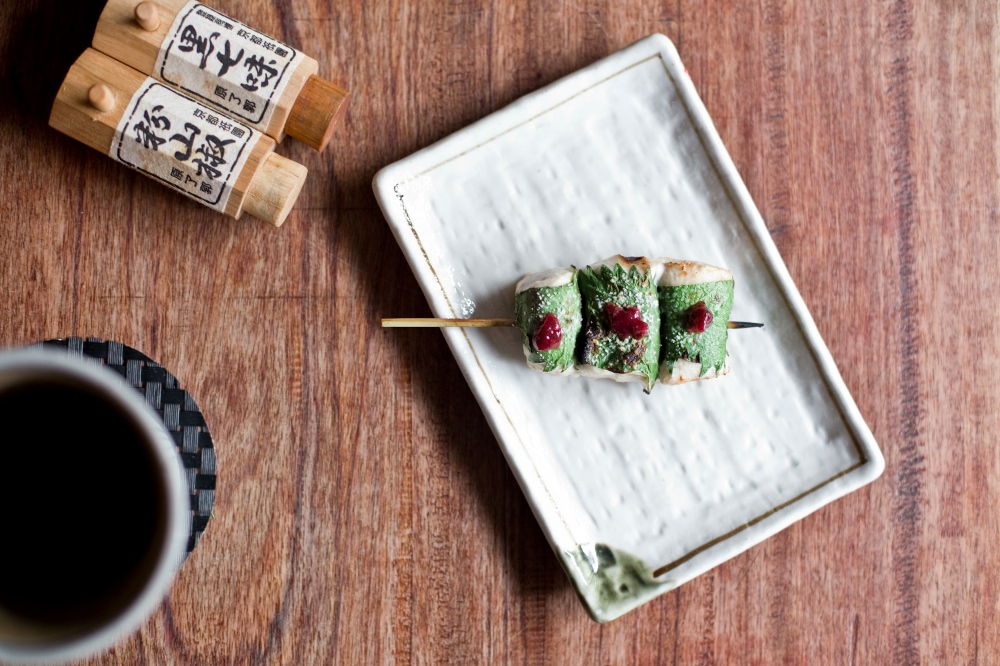 As one would find at an elevated yakitori spot in Tokyo, Tori Shin's action centers around a central U-shaped bar, from behind which six chefs tend to exotic skewers, many that involve chicken. Prior to Tori Shin's tenure, a sushi bar occupied 1193 1st Ave. and when Ikeda moved in he remodeled the restaurant's old sushi counter into a yakitori bar.

In Japan, yakitori is considered a street food — a casual snack one might enjoy standing around with a group of friends drinking a bunch of beers. There are a few higher-end places for skewers, but the ones that exist, like the Michelin starred Birdland, are usually in Tokyo. So, that's why Kono describes Tori Shin as a "very Tokyo-style restaurant." 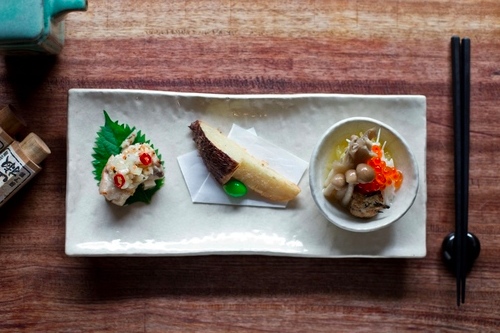 Informal yakitori joints generally offer basic skewers of meat, vegetables, and seafood. But the upscale establishments grill more unconventional selections that change regularly based on seasonality. A typical omakase at Tori Shin, which runs $65 and involves a whole lot of food, begins with oshinko, or a bowl of pickled veggies like daikon and cucumber. A kaiseki-inspired dish follows with three small preparations: grilled chicken thigh with diavolo sauce; simply fried taro cut to look like a matsutake mushroom accompanied by a single roasted ginkgo nut; and cold spaghetti squash and Japanese mountain yam somen noodles with a fried tofu seaweed ball, seasonal mushrooms, and salmon roe. Next a series of three skewers, which might be chicken liver with a sticky sweet yakitori glaze, juicy chicken breast with shiso and umeboshi, and crispy chicken neck skin. Different pieces of a chicken have different flavor profiles. Some cuts are enhanced with sweetness, while others parts are accentuated by spice. Depending on the type of skewer Kono is threading, he marinates chicken in flavors from sake to soy to miso. 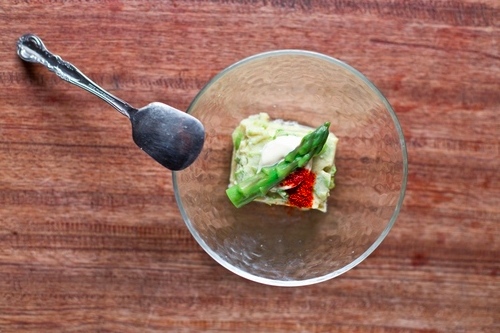 Over the course of a dinner, skewers are interspersed with smaller dishes, some simply focused on highlighting one ingredient, while others call for more detailed prep. Just recently, Kono served a course of unseasoned grilled baby corn still in its husk, followed by a block of tofu studded with asparagus. Before shiso sorbet or green tea ice cream, the savory session ends with a choice of rice soup. Options involve several assemblages of chicken and rice, but the most interesting pairing incorporates umeboshi, salted Japanese plum that adds a unique but welcome sour note to the bowl.

Kono cuts up a chicken the way a butcher breaks down a cow. Although he usually needs more than one chicken to make a skewer, just from one bird alone he's able to come up with forty different sticks, from liver to the "chicken oyster" (top chicken thigh), the restaurant's best seller. There's a core menu of skewers which doesn't change, but seasonal specials come and go, and Kono alters the menu about every two to three weeks. Omotenashi is a word in the Japanese language which represents good hospitality, going above and beyond to make sure the customer has a positive dining experience. For Kono that also means remembering his customers' likes, dislikes, and dishes recently served. If you dine at Tori Shin then revisit the restaurant two weeks later, Kono will grill up a new menu for you. 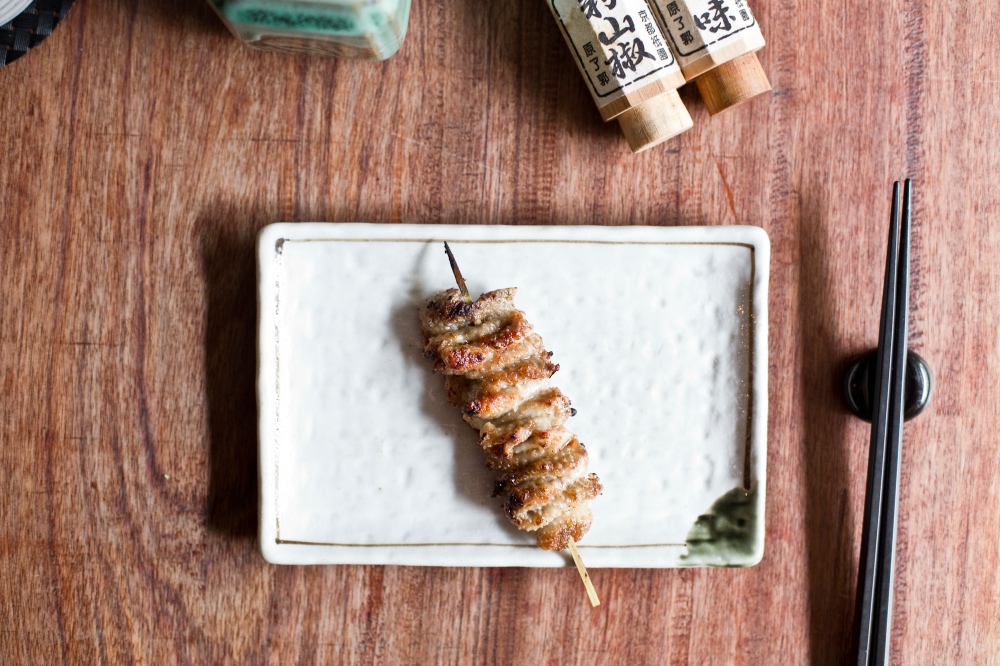 The most challenging aspect of operating a yakitori restaurant is learning to properly tend the long, rectangular bincho grill. And the type of charcoal a yakitori chef uses is paramount, because the coal affects how the skewers cook. Tori Shin buys a pricey Kishu binchotan charcoal from the Wakayama Prefecture. A case costs the restaurant about $250 and Tori Shin goes through almost one a night. The reason for splurging on this specific fuel is that is emits infrared rays which help to crisp meats on the outside while leaving the center moist. However, managing the heat isn't easy. When the coals are first lit they burn very hot, but then slowly die down to the ideal lower temperature for cooking. About two hours after lighting, the fire begins to die down, at which point more charcoal is added, so controlling the grill temperature through the night is a learned skill, which requires knowing how much fuel to add and when to add it. Also, specific ingredients, including various cuts of chicken, cook at different temperatures and for different durations. For example, dark chicken meat needs more time on the grill, while organs, liver, gizzard, and hearts are quicker. In general it takes between five to eight minutes to cook one skewer, and Tori Shin blows through about 600 a night.

Aside from the importance of cooking with a high quality charcoal, selecting premium chicken is equally critical. Tori Shin sources free-range Jidori chickens from an Amish farm in Pennsylvania, and the birds are delivered daily. Kono explains that prior to opening, he tried chickens from many tri-state area farms, but the birds he landed on were the most flavorful. 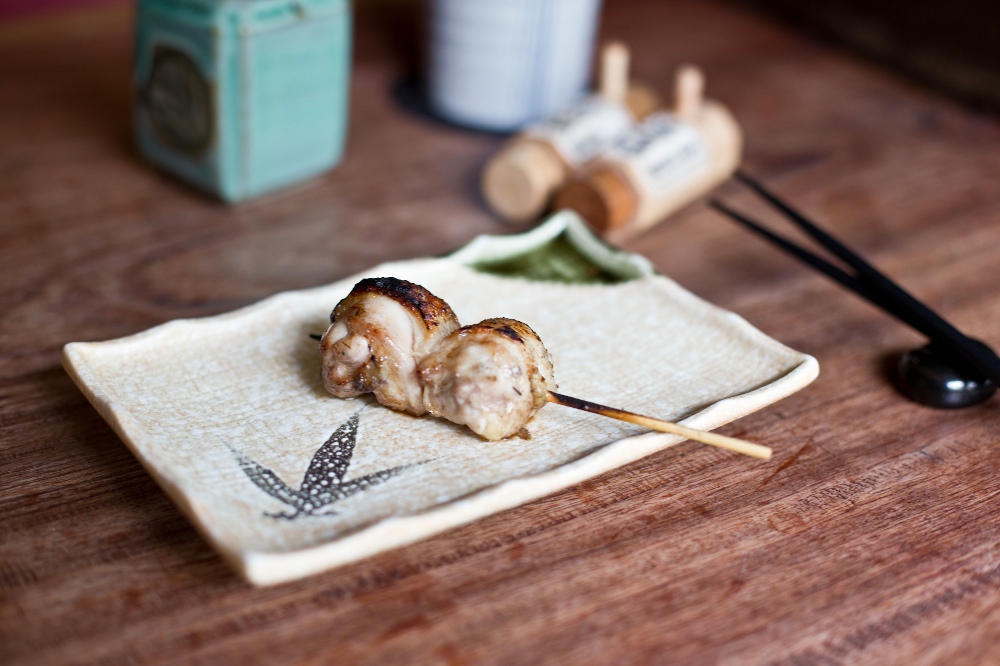 Although Tori Shin prides itself on presenting New York with a true Tokyo-style yakitori experience, most ingredients are locally sourced. There's a few items specialty brought in from Japan, like ground sansho pepper powder and shichimi (a dry chili pepper mixture), which sit on tables and should be used for dipping. Although these condiments can be found at Japanese markets in the US, the specific brands Tori Shin uses are not for sale here. They end up at the restaurant by way of Ikeda's wife's luggage.

Over the years Tori Shin's customer base has grown, and now 36 seats is not enough. Hopefully by the end of this year (pending construction and usual delays) the restaurant will move over into a space double its current size, with a mezzanine on 53rd Street between 8th and 9th Avenue. It's bringing that one Michelin star in tow, but gunning for a second. Instead of two grills, the new Tori Shin will be equipped with a third, and that additional cooktop will service a private six seat VIP counter. Here, Kono is planning to plate a refined chicken kaiseki omakase menu with a mix of yakitori and small seasonal dishes. He's hoping that his attention to detail there might earn the restaurant its second star.
· All Eating Japanese Coverage [~ENY~]