Share All sharing options for: Pho Vietnam 87: A Cut Above Chinatown's Vietnamese Restaurants

A friend who grew up in Hanoi lamented the state of Vietnamese food in New York. "Sometimes it looks the same, but it never tastes the same." We were standing in front of Pho Vietnam 87, a new café that recently erected a bright sign among the cut-rate interstate bus depots of Chrystie Street, just below Grand. It occupies the same space that once held Ninh Kieu, which I'd declared my favorite Vietnamese restaurant in town this past January. It promptly closed, after being in business only a few months. But the wacky décor remains: a train track runs around the ceiling of the stylish, bare-brick interior, which is also niched with miniature delivery bicycles and laughing Buddhas, holding their bellies as if having overeaten.

Over the kitchen chugs a three-foot steam locomotive — but more about that later.
After a few words in Vietnamese with the proprietors — to make sure they were actually Vietnamese — we were seated, and I challenged Mai to order three dishes that she missed most from her home country. The first was banh xeo ($8.95). When it arrived, it looked like an omelet, its rice-flour wrapper fried to sizzling crispness. Inside was the odd protein combination of ground pork and shrimp and masses of steaming beansprouts. It was delicious, a definition of mellowness. "This giant version is a city thing. In the Vietnamese countryside the pancakes are much smaller. In Hanoi we also put green beans in them," she explained, "so this version is certainly southern." 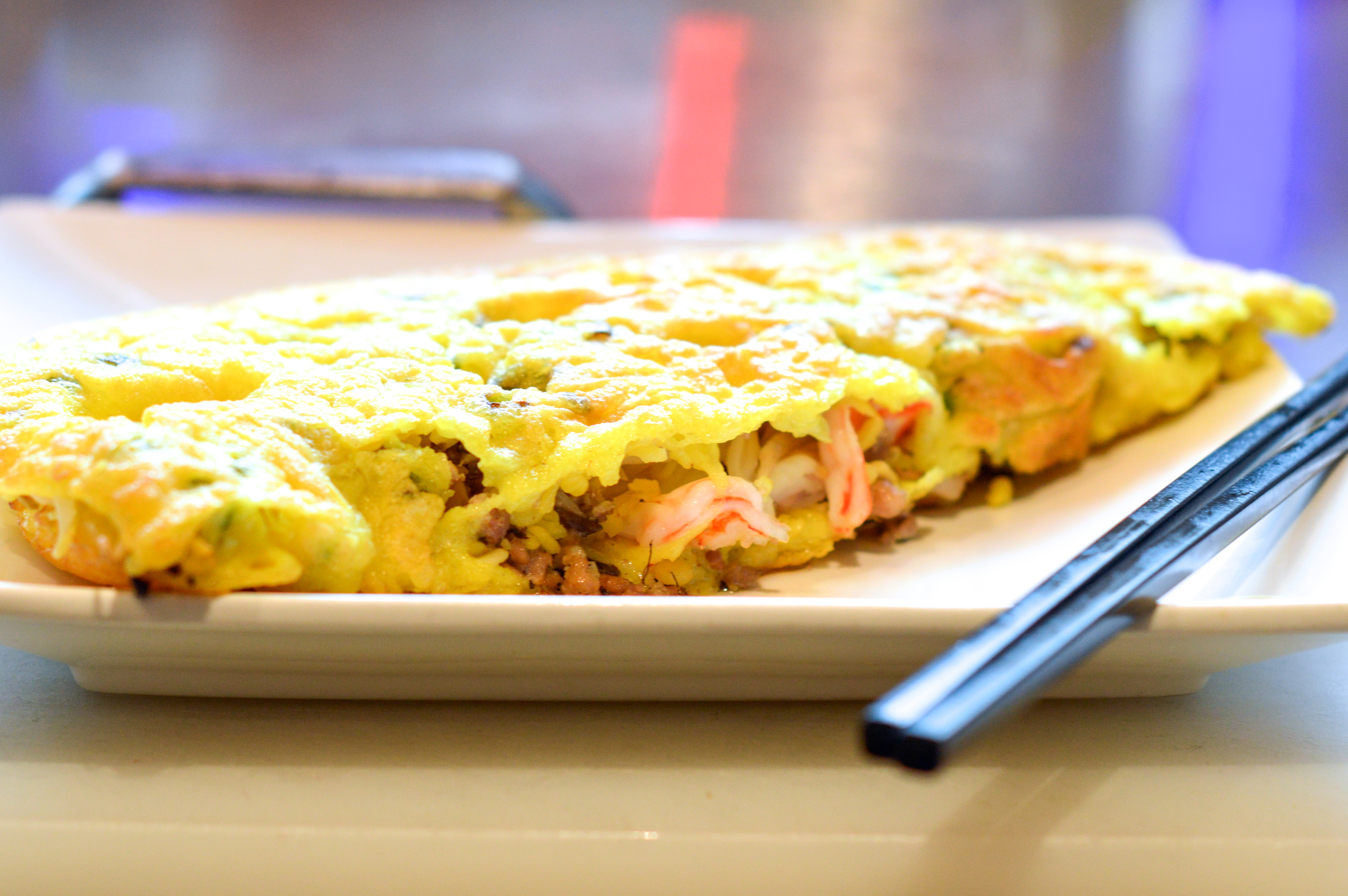 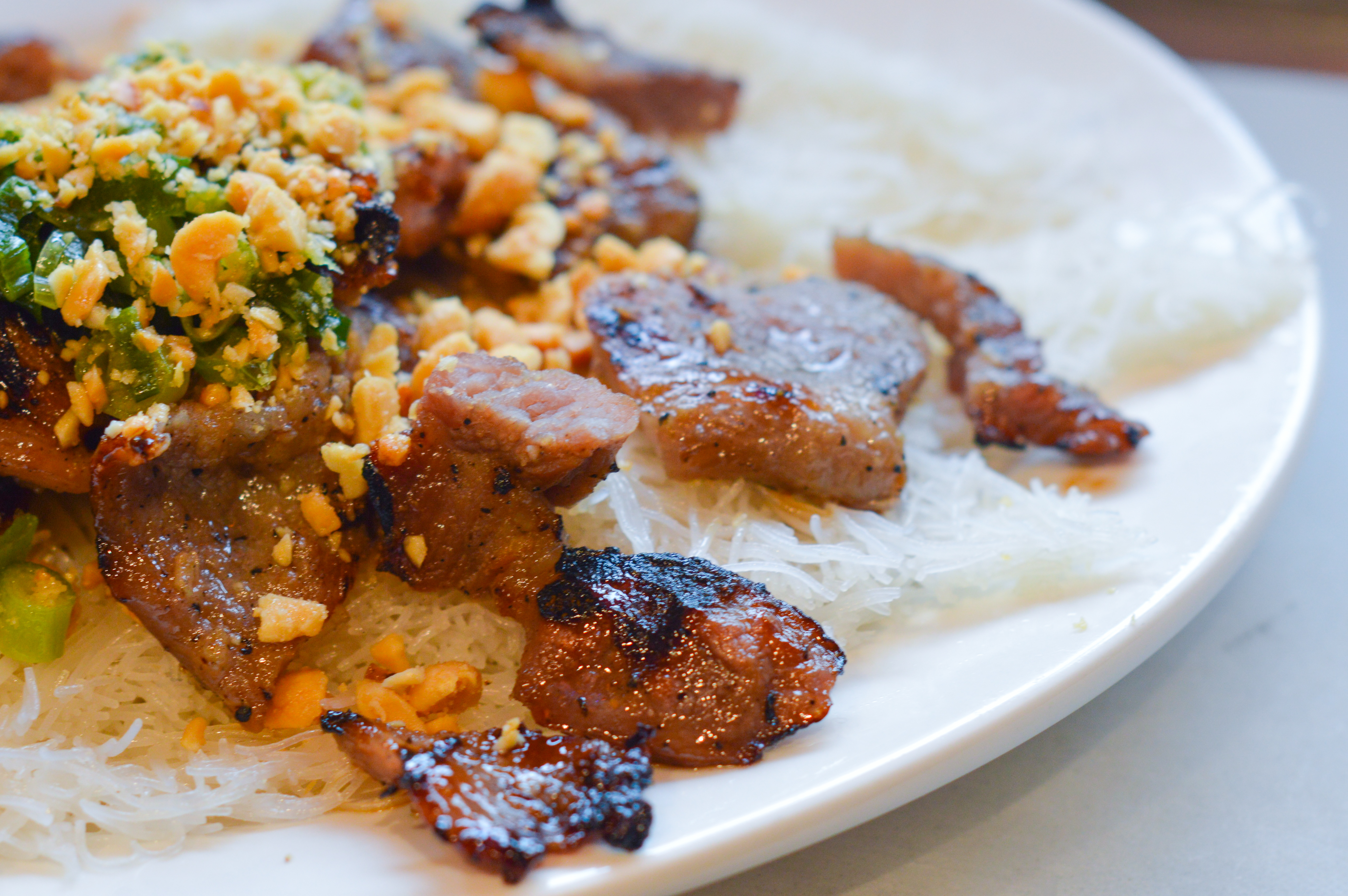 Next up was banh hoi, forming an entire class of assemble-it-yourself dishes. We picked the first on the list (banh hoi thit heo nurong, $10.75): copious masses of sliced pork resting on little swatches of fine rice noodles, which looked as if they'd been woven on a loom. Striped from the grill and smoky tasting, the pork glistened with sautéed scallions; crushed peanuts were heaped on top. Alongside came fresh basil, lime wedges, lettuce leaves, and pickled daikon and carrot. The idea is to select combinations of ingredients and wrap them up inside the leaves, then dip them in the fishy vinegar called nouc cham, goosed up with hot chiles or hoisin at your discretion. As Mai delightedly pointed out, "This is something that is served at weddings." Indeed, the process of assembling and eating banh hoi tends to make you feel happy and talkative.

Her third selection was surprising, not one of the myriad versions of pho that occupy one entire side of the menu, but bun bo hue, a meal-size soup from the central Vietnamese city of Hue (pronounced "Way"). Based on a long-boiled beef broth, the flavor is ramped up with lemongrass and chili oil, and the broth contains sliced beef, pig knuckles, and congealed pig blood, which resembles wobbly cubes of Jell-O. Don't worry, it won't turn you into a vampire. The rice noodles are thicker and looser than pho, so light you can have a mouthful and almost not be aware of it. Toss in the accompanying herbs and sprouts. There have been richer and better versions of this soup in New York City, nevertheless this one was tasty and — according to Mai — relatively authentic.

In three subsequent visits with different groups of Vietnamese food fans, much of the menu was explored with a particular emphasis on rarely seen dishes. Bot chien ($6.50) is a delicious heap of starchy, boxcar-shaped rice cakes scrambled with eggs — it would make an excellent brunch, if the city's mimosa mills only knew about it. "So nuoc dua" is a lovely ceramic bowl of gargantuan two-bite mussels immersed in a thick coconut-milk curry, which glistens a dreamy shade of green. One of the most expensive things on the menu is ca luoi trau chien don ($24.95), a beautifully fried whole flounder — many of the small bones are edible — with a cup of "Vietnamese sauce" on the side: deep red, sweet and sour, and laced with finely chopped shallots. Dump it all over the fish before you dig in. The sauce tastes almost French.

And don't miss the fried frogs' legs, which come drenched in butter or in a chile-lemongrass sauce, your choice. According to our waitress, butter is better. The deep-fried spring rolls, stuffed with pork and herbs, are some of the largest and most awesome in town. But what about the pho? From among two dozen permutations, one is well advised to order the deluxe xe lua ($7.25), which contains the full catalog of beef additions in a complex broth with cinnamon and star anise accents. What does "xe lua" mean? I asked my Vietnamese friend on that first visit. "It means ‘fire car,'" she explained with a smile. Then she continued, pointing at the steam engine over the kitchen, "which is also the Vietnamese expression for locomotive." Mystery solved.

Our review of Phó Vietnam

Cost
Bowl of pho or other meal-size soup, including tax but not tip $8. Larger shared meal with apps and entrees, $20 per person.
Sample dishes
Pho xe lua (multi-beef, you can also ask that beef balls be added), fried frogs’ legs with butter, green mussels with curry sauce, hot and sour shrimp soup (for a crowd), caramel pork with white rice, classic banh mi sandwich, crispy fried whole fish with Vietnamese sauce (for a crowd)
What to drink
No alcohol on the menu. Instead try lemonade (sweet or salty), soda with egg yolk and condensed milk, jackfruit or avocado milkshake. Tea is free.
Bonus tip
Vietnam has one of the world’s great coffee traditions. Available hot or cold, the coffee steeps and drips through a grate in a round stainless steel contraption that rides atop the cup. There is no way to hurry the process, so don’t fiddle with the machinery! Indeed, as Mai explained, “The whole idea is that you can relax while the coffee is dripping, and drink it after you’ve had a long conversation.”