Here’s a brief rundown of what I witnessed at Cherche Midi, Keith McNally’s beefy new French hangout on The Bowery: A young couple playing footsie. Staffers passing out “welcome” shots. A silver-haired couple necking between courses. Backless dresses. Thom Browne (or his body double). Keith McNally. Bartenders pouring nightcap shots (to me, at least). A patron who removed her left shoe at the bar (“long day”). And another guest who curled up her legs on a banquette as if she were at home, on a sofa, preparing to watch a Law & Order SVU marathon, in a cocktail dress.

And then there was a diner who gulped as the waiter ferried over her $48 prime rib, a roast that’s bigger than most clutch purses and certain small dogs. I know a guy who ate it twice in one day.

Well done, Mr. McNally. The British-born hospitality guru — the man behind Balthazar, one of the city’s finest all-day brasseries, and Minetta Tavern, one of our best steakhouses — continues to traffic in a seemingly impossible paradox: creating venues that feel like perpetually exclusive after-parties for pretty people even though they’re still open (and welcoming) to walk-ins.

Hang out by the bartenders, who appear as enthusiastic as golden retrievers (or staffers at Danny Meyer joints) when pouring dark rum daiquiris. Even if the counter is three deep, they’ll find you a seat in no time and get you eating chewy, piney, matsutake mushroom carpaccio, stat. One of those barmen catches me without a cocktail. "No welcome drink yet? We’ll get you sorted out."

These are all the types of stories, I like to think, that have kept Balthazar on the Eater 38 since that list (and this site) debuted in 2005. And now, nearly a decade later, Cherche Midi’s careful cooking ranks as among the best of the McNally bunch. So get cozy on a "Balthazar Red" booth and tuck into a pot of cheese, a silky ramekin of parmesan custard that’s flanked by fishy anchovy toast soldiers for omega-3 bliss. The correct pairing is a lemony glass of Lenoble Champagne, which, at $20, isn’t too shabby.

How about beef tartare? The classic preparation bursts with notes of garlic, olive oil, and Tabasco. Pro diners will scoop up the raw filet with a side of pommes soufflées, a fried tuber that looks like an Indian puri and tastes like an American chip. There’s your steak and potatoes, baby. 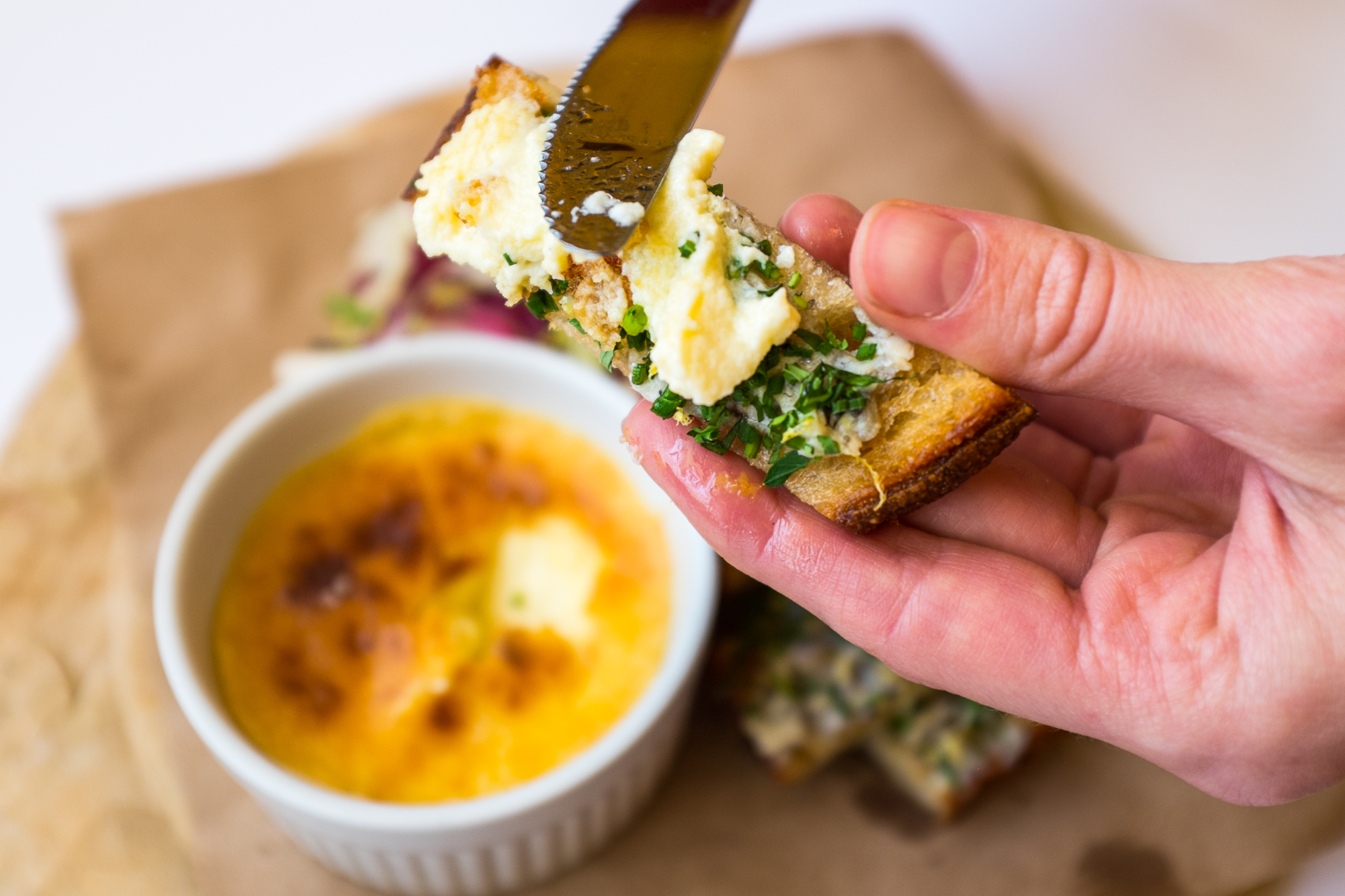 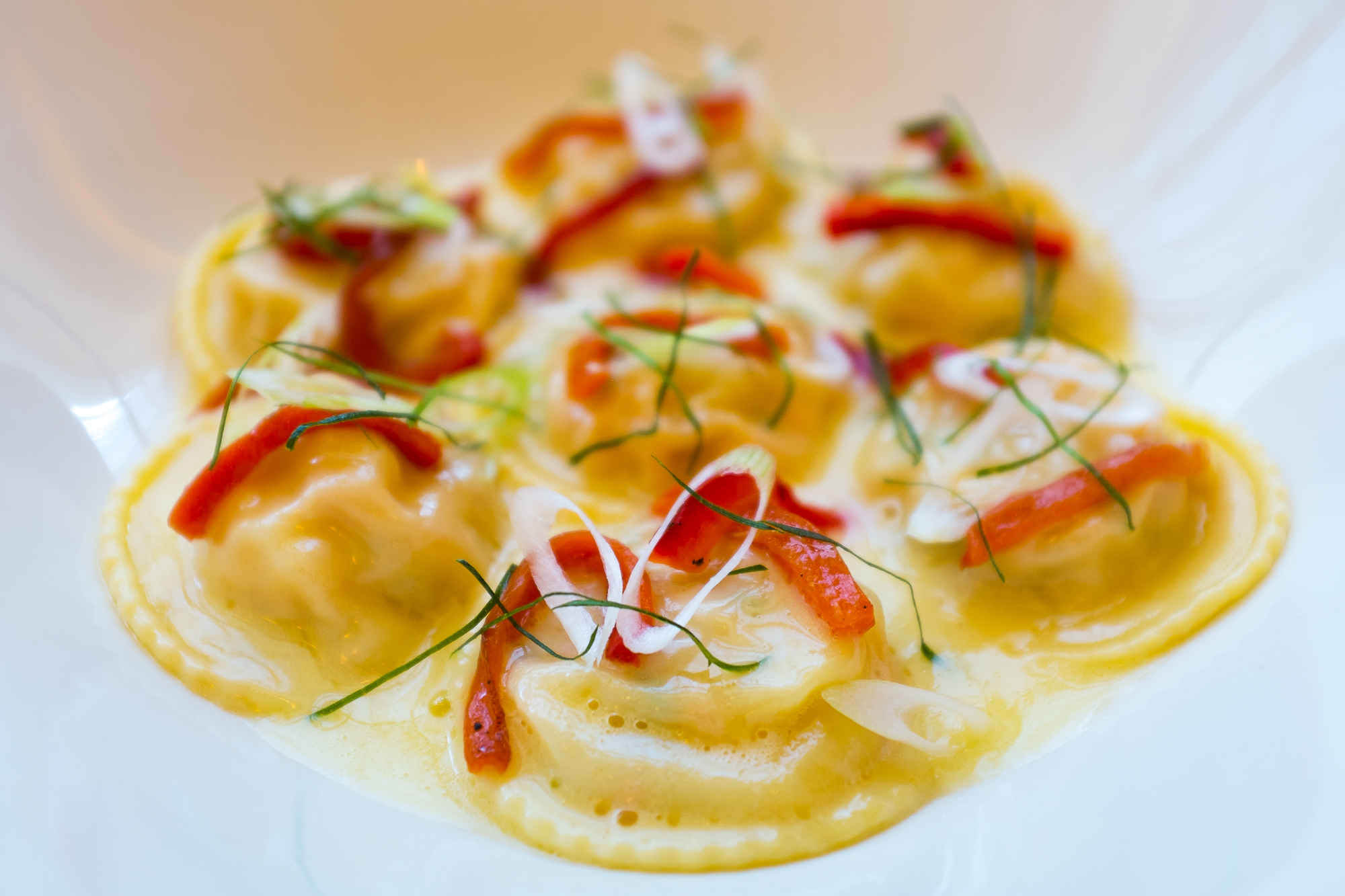 The killer app, however, is the sauteed foie gras with warm apples ($26). It’s paired with a roll of brioche so rich that if you stuff the warm, jiggly liver inside, you’ll have created one of the world’s great do-it-yourself foie gras donuts.

None of this is groundbreaking fare, nor is it intended to be. So here it’s worth noting that while younger restaurant groups like Momofuku and Major Food have rightly achieved fame and fortune by pushing the culinary envelope at every opportunity, McNally has somehow stayed relevant by riffing on the same bistro-style formula. His venues are the James Bond movie franchise of restaurants; you know what’s going to happen with each new installment (martinis are poured, the bad guy dies) but they still merit your attention because each is reliably awesome in its own semi-distinct way.

Cherche, for its part, serves what might be the fanciest food of McNally’s empire, even though the boisterous room, with paper placemats, pedestrian wine stems, and gorgeous tile floors, doesn’t feel a heck of a lot more formal than the late, lamented Pastis. No matter; this is where chefs Shane McBride (Balthazar) and Daniel Parilla show off their technical chops with dishes like hamachi crudo, the fatty fish sliced with as much precision as at a serious sushi spot.

Rare lamb saddle and braised shank, drenched in heady jus and finished with a grassy mint-tarragon puree, wouldn’t be out of place at a two-Michelin starred tasting menu restaurant. And salad Nicoise is just a study in how to do things right. The $26 entree is a bevy of anchovies, lemon smashed potatoes, sweet roasted tomatoes, lettuce slicked with olive tapenade and best of all, mouthwatering slices of seared bluefin tuna.

Warning: the menu exhibits some weakness in execution and conception. Frogs legs still taste underseasoned after they’re dunked in a heady garlic velouté. Roast chicken is both overcooked and under-sauced, with barely enough jus to coat the bird, never mind for dredging fries in. And while the burger as a whole is good, more of its flavor is derived from the gruyere and bacon marmalade than the dense patty, which doesn’t crumble with the same ease as it does at as, say, The NoMad Bar. 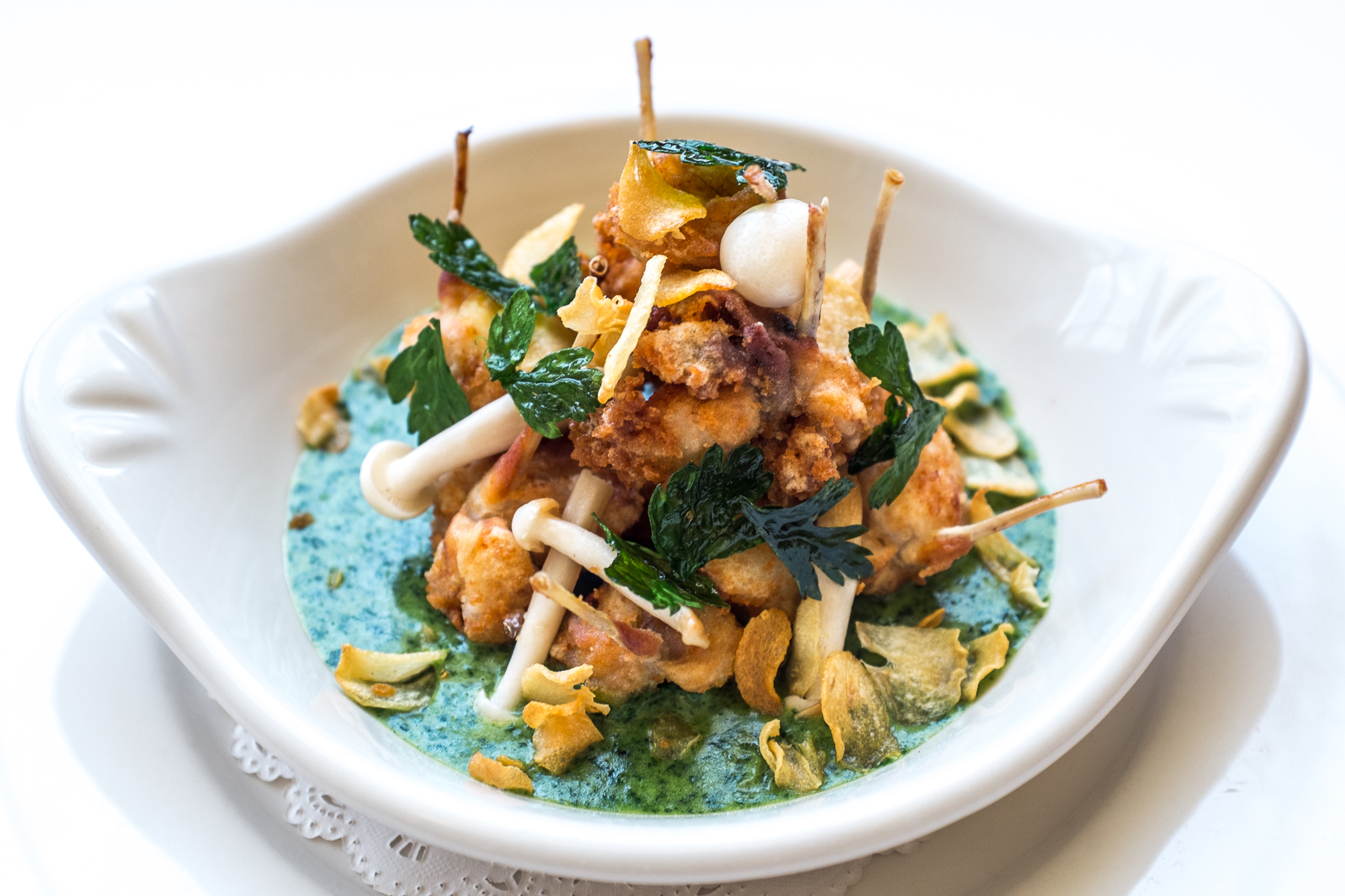 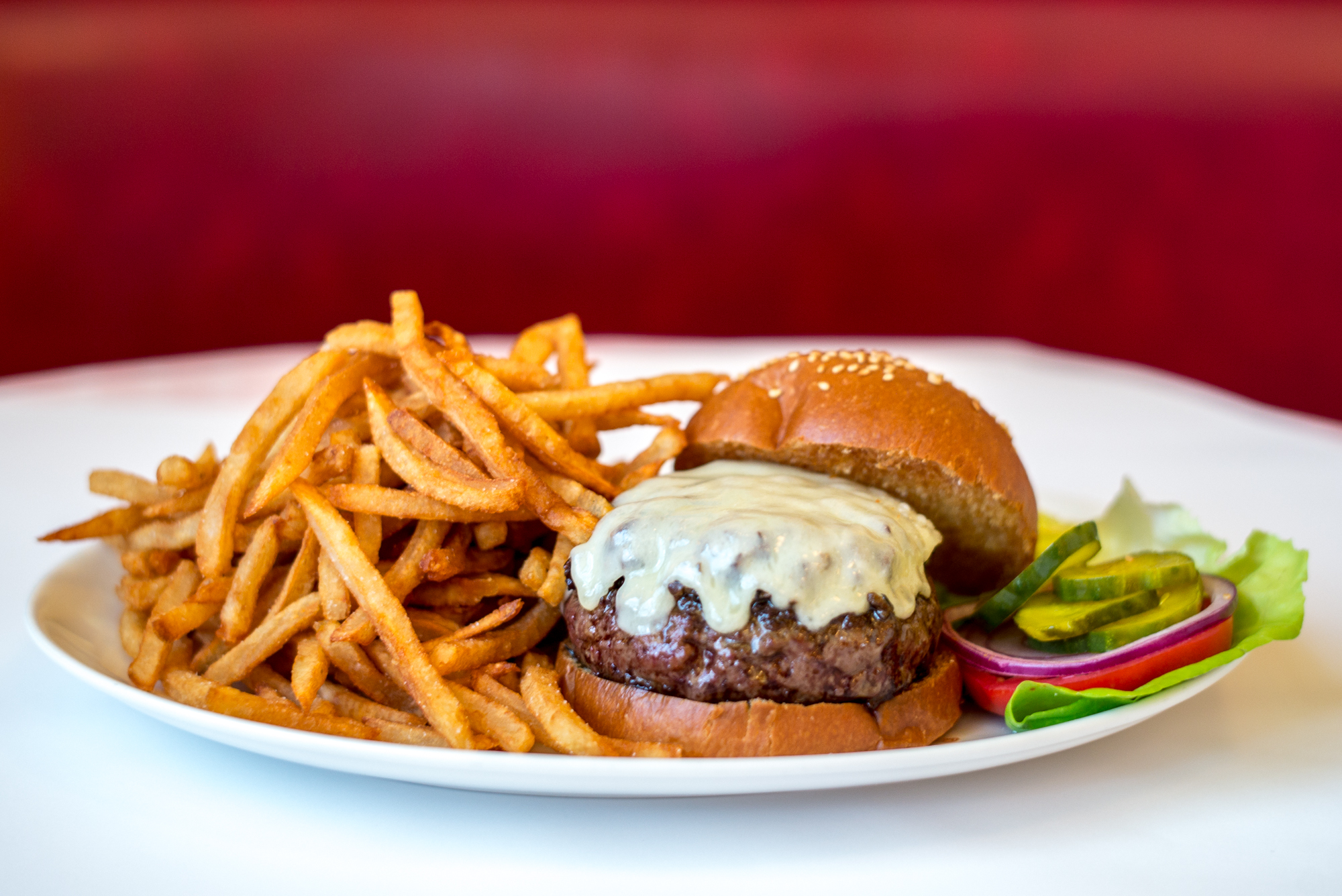 But really. You’ve come here for the expensive proteins. The dry-aged prime rib is a carnivore’s dream, exhibiting a split personality of flavors. The firm inside is all about the clean irons of a rare roast beef — right on. Then things get epically more interesting around the exterior "cap," a study in dry-aged bliss with the the accordion-like texture of brisket and the musky aromas of the English countryside: blue cheese, black truffle, wet earth.

The de rigueur dessert? Ile flottant — soft mounds of meringue slathered in creme anglaise. If snow could warm up without melting, it would taste like this. The creation is nearly identical to La Grenouille's, a restaurant that’s been around since 1962. And if we’re lucky, we’ll be ordering the same dessert in a brand new spot a half century from now and we'll remark that’s the way they still do it at Cherche Midi. Yep, McNally wins again.

Our review of Cherche Midi