Share All sharing options for: Cha-An, The East Village's Matcha and Mochi Gem

It's not imperative to be a tea drinker to find comfort at Cha-An, the East Village's decade-old Kyoto-style tea house planted on the second floor of 230 E 9th Street. On the ground level there's a buzzer with the letters T.I.C., which stand for Total Information Center, the parent company that owns Cha-An (their office is located on the third floor), in addition to almost a dozen other curious Japanese restaurants and bars, many of which are mere steps away. It's likely you've frequented some — perhaps capped off a late night at sake bar Decibel or dined on buckwheat noodles at Soba-ya. But what you probably didn't realize is that there's one individual behind all these places, and he also happens to be the hood's OG Japanese Sensei who opened his first Japanese restaurant, Hasaki, three decades ago, back before the East Village had earned its nickname, Little Tokyo. 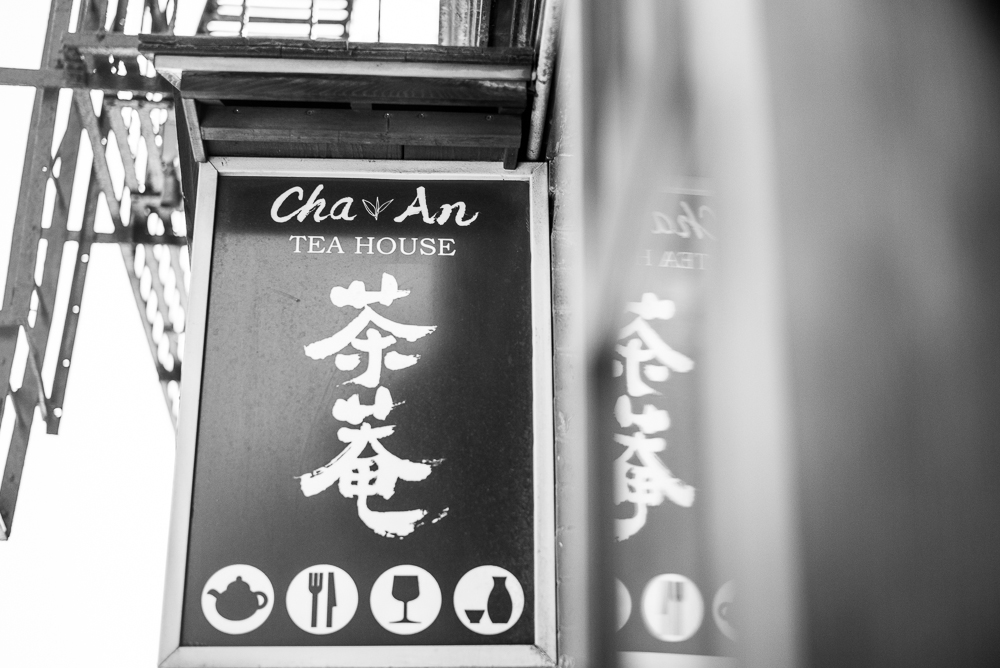 Mr. Bon Yagi is the Japanese king of the hill. So much so that when Gaku Shibata (Yopparai) was looking for space to house his newish casual izakaya Azusu, he overlooked the East Village so as not to infringe on Yagi's territory.

At age 18 Yagi came to the United States and, with a friend, started a business delivering vegetables to eateries around Manhattan. Wanting a place of his own, he researched local restaurants that were the most profitable, and ended up launching an American diner named 103 Second at 103 Second Avenue. But, he ultimately missed the food from his country, which prompted him to open his first Japanese restaurant, Hasaki, a sushi spot that's celebrating its thirtieth anniversary this year. It's situated mere steps from Cha-An on 9th Street, also near some of his other businesses like Hi-Collar and Yonekichi, which was formerly Otafuku. Back in the day, the East Village was not home to the many Japanese operations that now color the streets, and Yagi is credited as the neighborhood pioneer who helped shape the East Village into the Japanese-tinged district it is today. His inspiration was simple enough: He was motivated to open establishments serving the types of food he missed from Japan that were not available in New York. 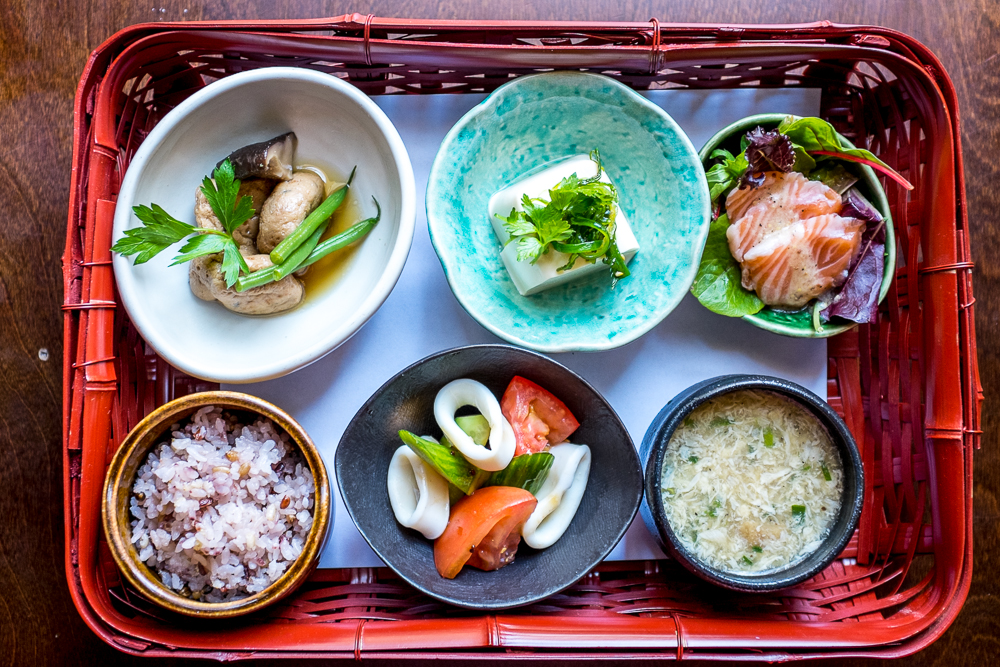 Tomoko Kato, now of Patisserie Tomoko in Williamsburg, was the opening chef at Cha-An and she created many of the recipes the tea house still serves today. She's the master behind Cha-An's signature dessert, a black sesame creme brûlée, in addition to house-made mochi in flavors like green tea and Earl Grey (black sesame was a more recent addition). But Kato decamped over two years ago for her own venture, at which point Masanori Nakano took over, slightly amending Cha-An's menu of traditional Japanese homestyle savory dishes. 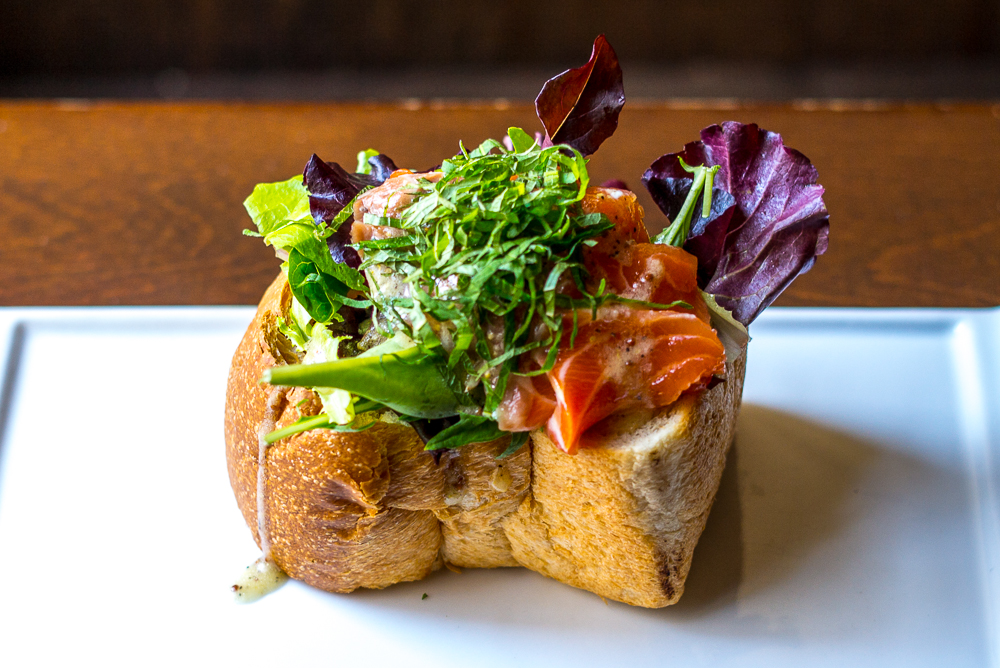 Especially popular is the donburi rice special: a bowl of steamed seven grain rice with a daily changing protein like ebi chili or chicken soboro. There are also lunch sets and toasts, both sweet and savory. House-made white bread is generously sliced and spiked with tea smoked salmon or red bean butter. 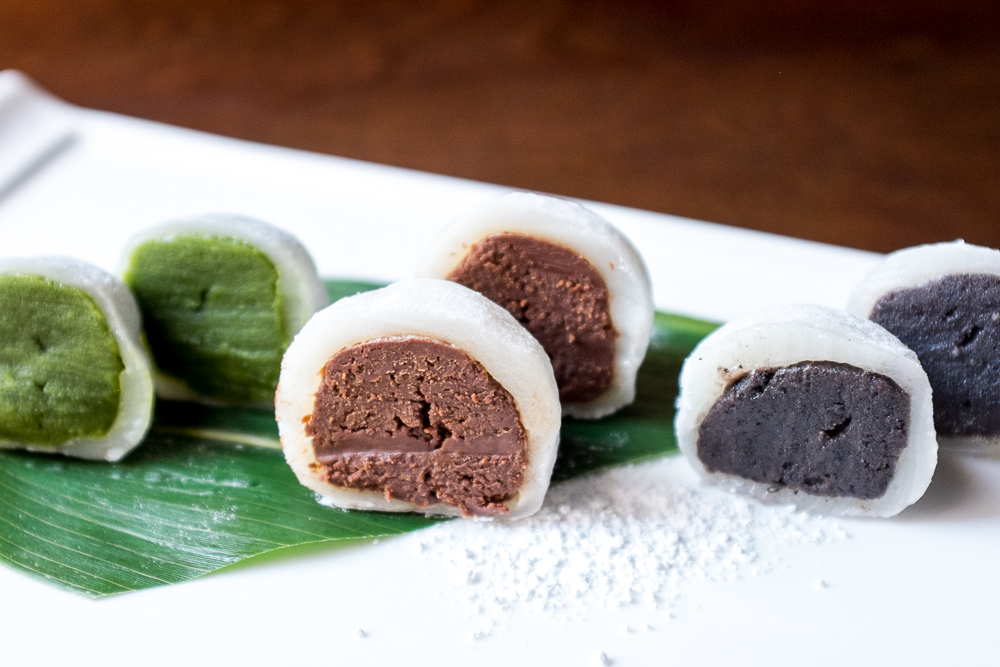 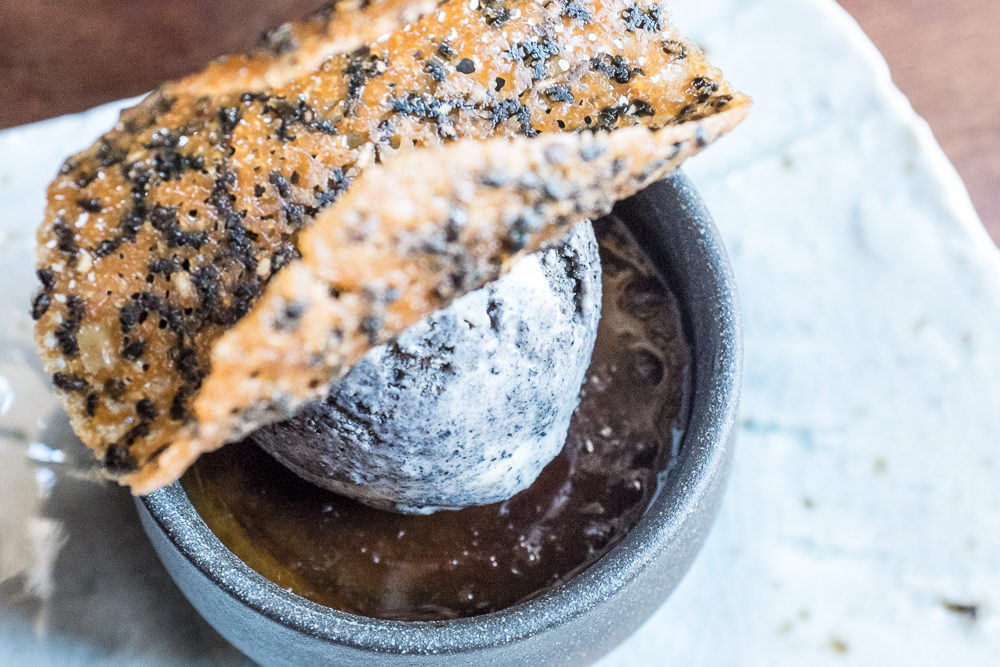 Although savory was always on offer, when Cha-An debuted, the casual tea parlor sported more of a cafe feel, with a focus on tea and desserts. There was even a small hut for patrons to experience a traditional tea ceremony, but that space proved less popular. In the last decade Cha-An has become so busy that Mr. Yagi decided to do away with the ceremony and tatami mats in order to make more room for regular customers. Early on Cha-An attracted a mostly Japanese customer base, but over the years that's changed to a more global audience, and savory dishes are now ordered just as frequently as dessert and tea. 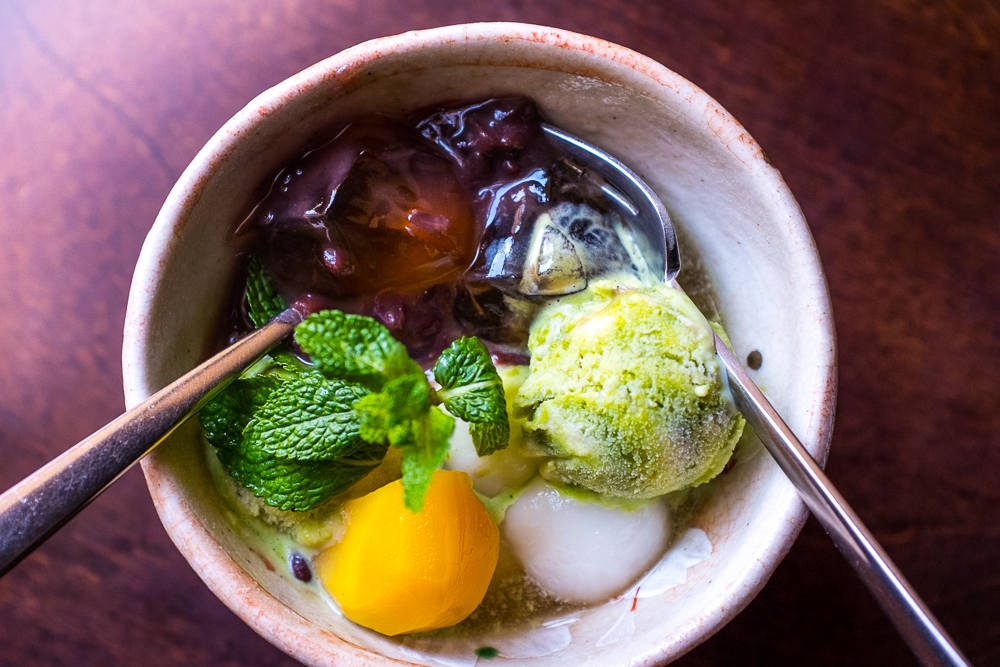 Green tea reigns supreme, with 11 options available from genmaicha, a green tea mixed with roasted brown rice, to the pricier green tea powder known as matcha. Sencha, which refers to green tea leaves that are steamed to prevent oxidation, and then rolled, shaped, and dried, is the most popular green tea in Japan, and Cha-An brews five varieties. Makinohara Sencha is fully bodied with strong grassy notes. Uji Kabusecha from Kyoto is a shaded green sencha tea, which means that before the leaves are harvested they are covered with a net that blocks out direct sunlight. The shade is supposed to preserve sweetness in the leaves and lower acidity. Chiran Sencha is a milder tea with medium bitterness, Fukamushicha is full-bodied, and Tamaryokucha bears notes of citrus and grass. Hojicha, on the other hand, is a roasted green tea with a smokey sweet flavor and brown hue. 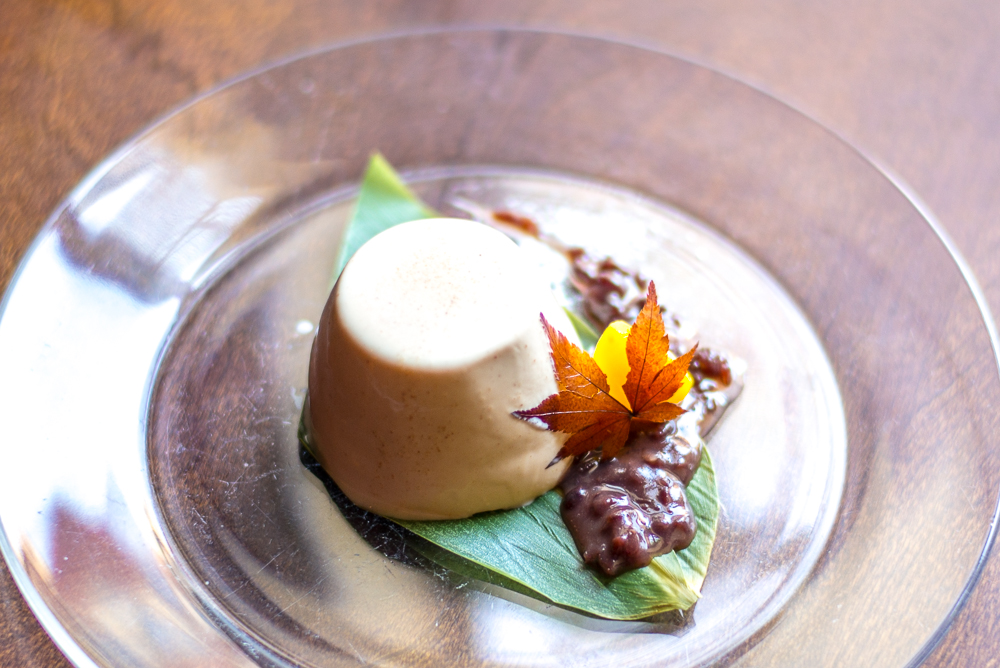 Of all Cha-An's teas, matcha is the most expensive because of the process used to produce the finely milled green tea leaf powder. Matcha tea leaves are also shaded like Uji Kabusecha, but matcha leaves are shaded up to 20 days to prevent direct sunlight while Uji Kabusecha is only shaded for about a week. Tea harvesters only pick the best buds, and depending on whether the leaves are rolled out before drying or whether they are laid out flat to dry will produce two different green teas. If the leaves are rolled out they become a premium green tea called Gyokuro (similar to Uji Kabusecha but a higher grade because the leaves live in shade longer), while the leaves that are laid out flat become Tencha. Tencha is the base leaf used for making matcha. Once the leaf is de-veined, de-stemmed, and stone-ground is becomes the fine powder known as matcha. It is also the traditional tea brewed during a Japanese tea ceremony. 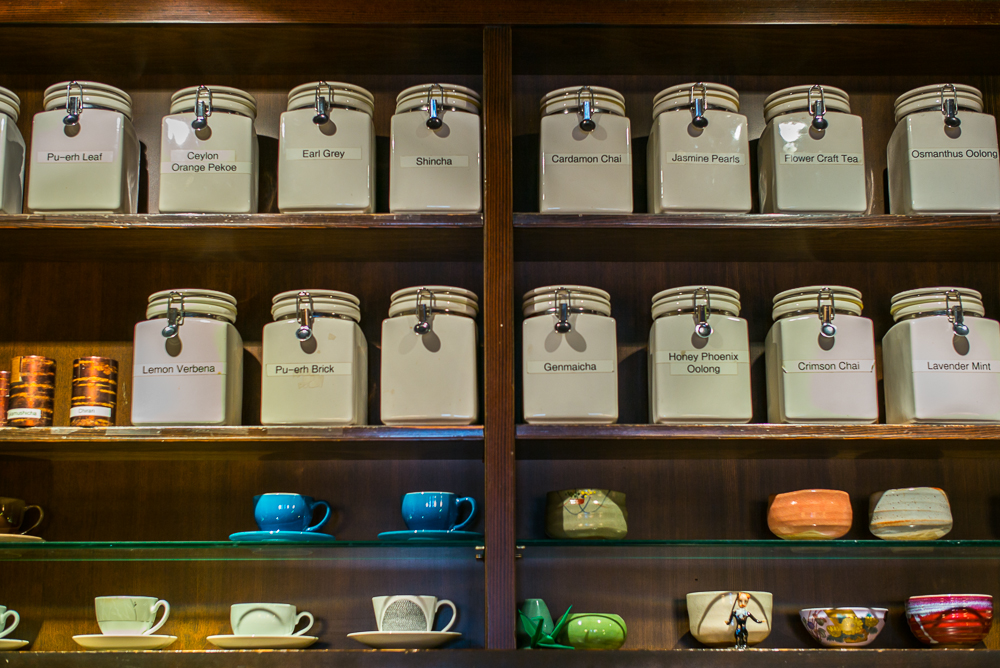 At Cha-An, matcha is served in its final form as opposed to showing the brewing process. The tea is made from matcha powder and water heated to 175°F, quickly mixed in a shallow bowl using a bamboo whisk. There's a whole ceremonial process to making matcha, from how you enter the room, to how you scoop the water using a bamboo scoop, to how you whisk the matcha. Young girls in Japan are taught the skill of ceremonially making tea much in the way someone in this country would learn the piano. The reason for using a bamboo whisk to whip the matcha is because the powder itself is bitter, and whipping it aerates the tea so it combines well with the hot water. When properly mixed, bitter matcha powder transforms into a sweet green tea. No milk or sugar is added. 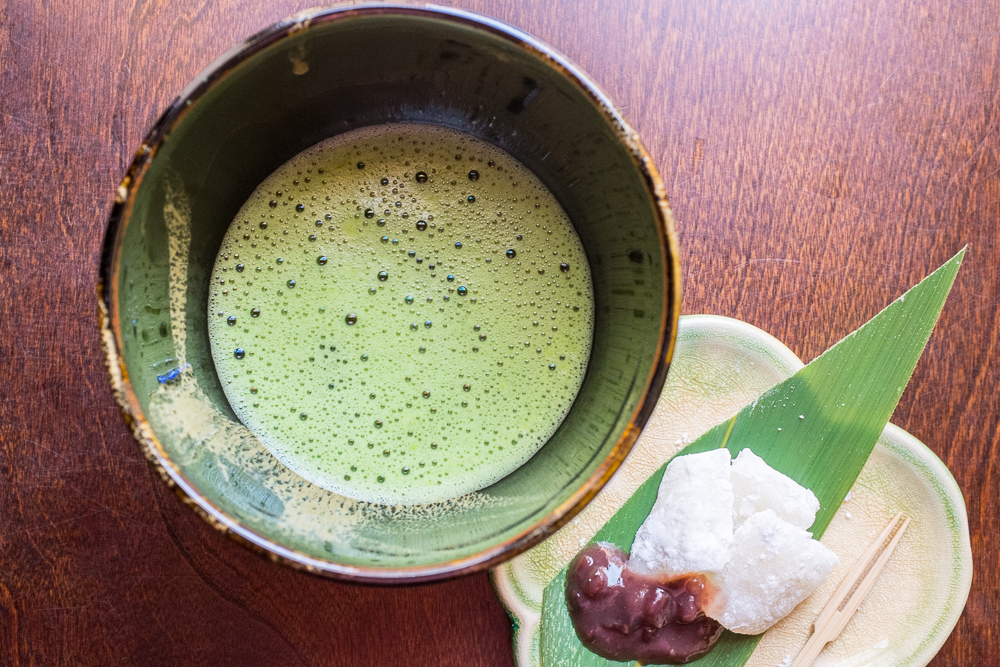 Anyone who has tried matcha will have noticed the beautiful bowls in which the tea is usually presented. During a traditional tea ceremony, using artisan cups/bowls is a way for the matcha maker to show appreciation for the drinker. Also, every utensil has a name: This spoon was made in this village by this person. This bowl was made in this way with this art. It's a mark of generosity from the presenter to the drinker: "Please use this beautiful bowl to enjoy your tea." And there are rules for both how to serve tea and how to receive it. Whoever receives the tea is supposed to accept and look at the cup/bowl to appreciate its beauty. So, it's not just a simple cup. It's a piece of art with which the drinker interacts. It has a front and a back (depending on where the art is) and the drinker turns the cup so the artwork is facing away when drinking. 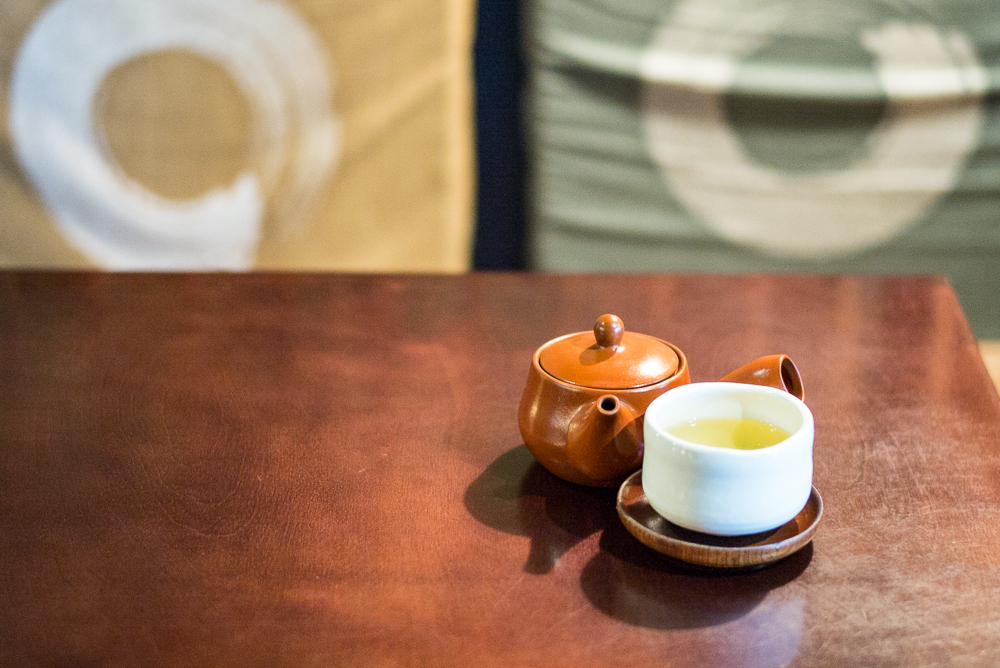 In general, Cha-An offers a pretty typical selection of teas one might find at a tea house in Japan, but note that not all teas are Japanese. One will also find Oolong from China and Darjeeling from India.

Although Cha-An is aesthetically designed after classic Kyoto tea houses and incorporates elements of a typical Japanese tea ceremony, its sweet and savory dishes follow a more modern Japanese tea house model. Mr. Yagi seeks to present New Yorkers with a unique taste of Japanese culture, both Old World and New World, and he continues to do just that with every Earl Grey mochi sold.