Throwbacks: The Secret of the Balthazar Playing Cards

Share All sharing options for: Throwbacks: The Secret of the Balthazar Playing Cards

Next week marks a new era of Eater. So all this week, we're celebrating Eater 1.0 by republishing some favorite pieces from the vault. Ahead: a 2007 investigation into a Balthazar mystery. 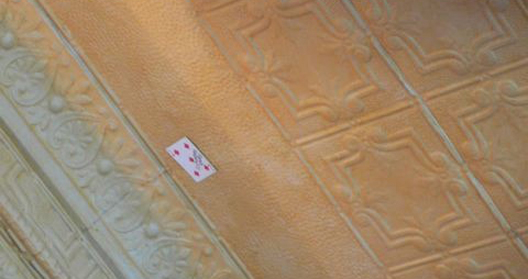 Balthazar is a restaurant of impeccable design, of course, where every detail, every square inch of McNally patina, is purposeful and calculated. The accepted bench mark for New York brasserie design, it is knocked-off a dozen times a year, at least, to varying degrees the city over. Which is why we've always been curious about the playing cards pasted to the ceiling (pictured above; take a look next time you're there, they're easy to spot). Were they really on the original design spec? Is this an inside joke in the McNally clan? We waited for Keith to take a break from his bout with Bruni, then asked him. He reveals:

"We had a magician come for a private party one time (JB Benn I think his name was), and one of his tricks was to magically send a number of playing cards way up to the ceiling where they STUCK! This absolute gospel. (But it sounds like a story, I know). Anyway, I kind of liked them there so I've just left them. Must be nine years now!"

Let it be known, designers: Playing cards are the new water stains.
Foursquare