Beyond Sushi, a Nutritious Alternative to White on Rice

Share All sharing options for: Beyond Sushi, a Nutritious Alternative to White on Rice 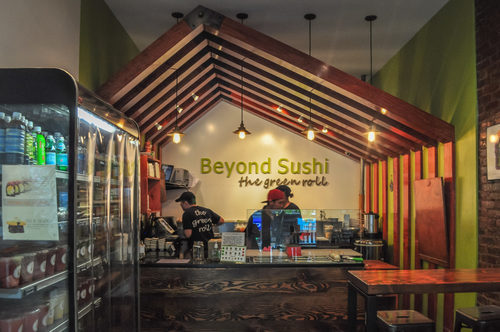 It takes a certain amount of confidence to open a restaurant named Beyond Sushi and not serve fish. But, according to Dictionary.com, the definition of "sushi" is "cold boiled rice moistened with rice vinegar, usually shaped into bite-size pieces and topped with raw seafood or formed into a long seaweed-wrapped roll, often around strips of vegetable or raw fish, and sliced into bite-size pieces." So, technically, Beyond Sushi is serving, well, sushi. Just not the traditional fish kind that comes to mind.

Guy Vaknin and wife Tali are the force behind Beyond Sushi, the tiny two-year-old fast casual vegan eatery that specializes in fruit and vegetable sushi paired with flavored, tofu-based sauces. Over the last two years, the cafe, near the eastern outskirts of Union Square, has earned a following for its unique approach to healthy eats. Though patrons refuel on vegetables, fruits, and whole grains, this, for a change, is not a salad place. 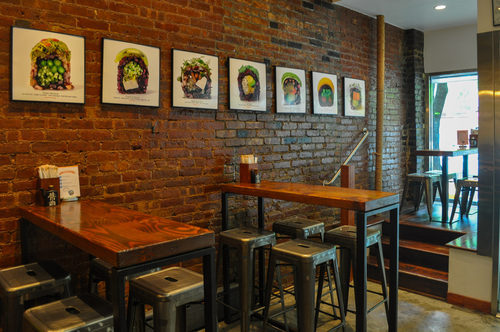 Prior to his Beyond Sushi days, Guy attended culinary school at the Institute of Culinary Education here in New York and then went off to serve as executive chef at his father's kosher catering company, Esprit Events. Over a period of four years, he experimented with creative ways to operate the company's sushi station. In the kosher world you can't mix fish and meat, and in effort to offer an innovative approach to sushi, Guy came up with the idea of healthy fruit and vegetable-based bites. Thus was born the foundation for Beyond Sushi.

Although he was unsure how New Yorkers would respond to fish-free sushi, Guy threw open Beyond Sushi's 14th Street door on July 1, 2012. Initially, he put forth a vegetarian and mostly vegan array of vibrantly hued rolls, rice paper wraps, and individual pieces of fruit and vegetable-topped rice, each served with a complementary tofu-based sauce in flavors like white miso, carrot ginger, and toasted cayenne. But, after listening to customer requests for an entirely vegan menu, Guy reworked his non-vegan sauces to ditch the eggs and become totally vegan-friendly. 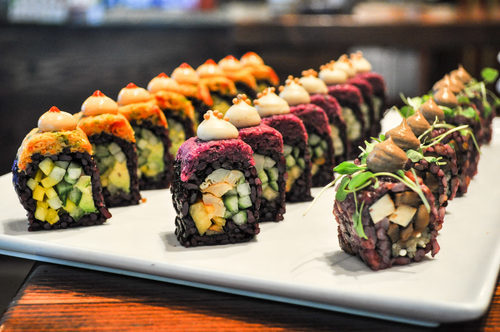 Pick up Beyond Sushi's menu and what immediately jumps out are the jarringly colorful rolls. These lilliputian pieces of art leave an impression thanks to the restaurant's melange of polychromatic fruit and vegetable cuts, alongside five different types of multicolored, seasoned rice. Depending on the dish, Beyond Sushi begins with organic purple barley, organic short grain brown rice, Chinese black forbidden rice (Dimes is a fan of this stuff too), organic rye berries, or red rice. The black and red rice is imported from China, while all other grains are grown domestically and sourced through Ace Natural. Some grains wrap rolls solo, while others are mixed into the house-blended six grain medley (red rice, black rice, short grain brown rice, rye berries, hull-less barley, pearl barley) that goes into rolls like the Sweet Tree (avocado, sweet potato, alfalfa sprouts with toasted cayenne sauce) and Mighty Mushroom (enoki, tofu, shiitake, micro arugula and shiitake teriyaki sauce).

Why those grains? They each contain health benefits way more potent than plain white rice. Purple barley is higher in protein and fiber, and also contains the same antioxidants as blueberries. Black rice is believed to help reduce blood pressure, and is a good source of fiber and iron. Brown rice has fiber, protein, plus vitamin B, while rye berries are also high in fiber and protein, in addition to phosphorus, iron and potassium. Finally, red rice increases blood circulation and contains monacolins, compounds which help to lower LDL or bad cholesterol. 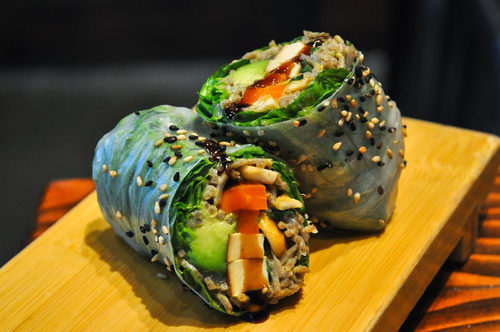 Beyond Sushi's core menu is built off those grains. In addition to the set menu, which doesn't change, Guy frequents vendors like Stoke Farms, Heermance Farm, and BodhitreeFarm at the Union Square Greenmarket for inspiration to build his roll of the month and piece of the month. He also sources non-GMO tofu locally from Kong Key Foods in Long Island City. For September the roll is black rice encircling Dijon-crusted roasted celery root, cucumber, and peaches, then topped with red cabbage, cilantro, and celery, plus a Celery root purée sprinkled with mustard seeds. Similarly, September's piece of the month calls for black rice topped with peaches, mustard seeds, and that same celery root purée. 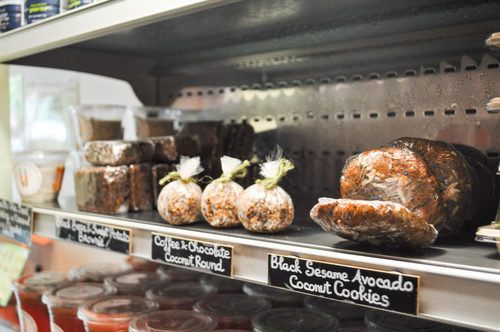 Considering that Beyond Sushi currently uses 80 percent organic ingredients and is moving toward totally organic, prices are affordable. Rolls cost $6.65 for eight bites, individual pieces run $1.15 each, rice paper wraps are either $5.29 or $8.73 depending on size, and hand rolls are $3.67 or three for $10.10. Beyond Sushi also lets customers mix and match with a bunch of combos geared to lunchers. Those who order to-go will also note the addition of a tiny squeeze bottle of sauce, which one is meant to administer to his/her liking. Patrons can boost sushi flavor with either soy sauce, the paired tofu sauce, or both. Those little squeeze bottles have become one of Beyond Sushi's signature moves: Affixed to the house-made vanilla chia pudding is a small squirt bottle filled with caramel sauce to enhance the diced cinnamon-roasted apples on top. All the other desserts are made in house too, and all use agave syrup in place of sugar. Agave also sweetens the black sesame avocado coconut cookies and the black bean sweet potato brownie, plus all drinks that are made on site, like the orange coconut juice and the strawberry kiwi yuzu juice.

Beyond Sushi's commitment to healthful eats also extends to a few grab and go sweets on offer. There are the self-explanatory vegan BadAss Power Cookies, vegan/gluten-free Milkless chocolate bars, and organic fruit and nut chocolate bars by Bixby. But one of the best and most creative products for sale is Beyond Sushi's new line of sweet and savory nut butters, aptly named Beyond Nuts, which are entirely organic and come in flavors like cashew coconut banana, and sunflower halva vanilla. 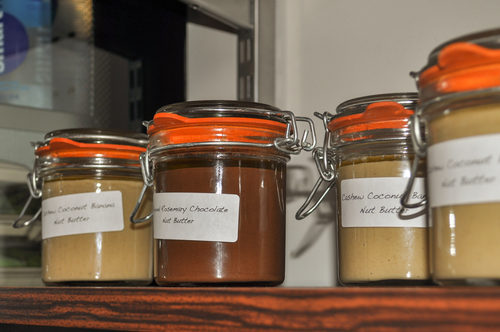 Part of Beyond Sushi's future mission is to become entirely organic. Right now the only reason Guy cooks with some non-organic ingredients is to keep prices down. Regardless, he's off to a strong start. Ten months after hitting 14th Street, Beyond Sushi expanded with a counter at Chelsea Market, and in about a month location three will hit Midtown at 62 West 56th Street at Sixth Avenue. As compared to 14th Street's 350 square feet, Midtown will occupy about 1,000 square feet with a focus on grab and go items for surrounding office dwellers. After Midtown, the West Coast — perhaps San Francisco or Los Angeles — could be next.
· All The Green Scene Coverage [~ENY~]