The Musket Room Serves Up a Sophisticated Venison Dish

Share All sharing options for: The Musket Room Serves Up a Sophisticated Venison Dish 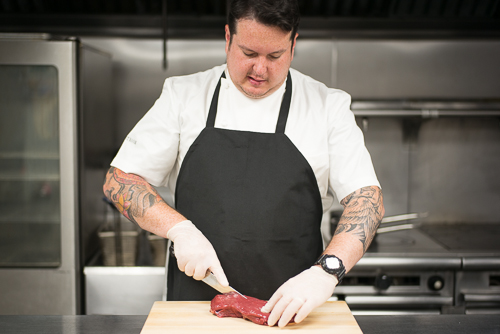 There are a few reasons The Musket Room's chef Matt Lambert decided to put New Zealand red deer on his menu. Most obviously because "at it's heart this is a New Zealand restaurant" he says of his year old establishment. The chef, a New Zealand native, had relatives who owned a venison farm back home, so he wanted to showcase the native red deer. But mostly the dish is on the menu because he wanted to defy expectations: "The question everyone asks is 'a New Zealand restaurant, you got lamb?' Aha! No I don't!" The chef concedes that he will eventually succumb and feature lamb on his menu, but has held off because he finds it a "little predictable." For the time being at least the venison with flavor of gin is the most popular entrees "by far."

The chef uses red deer, a breed that originated in Britain. "It's different to white tail, the flavor is less gamey" he says when describing the meat. He imports his from New Zealand, and uses a cut from the leg that is selected for its tenderness. This is buttressed by a 45 minute sous vide followed by a pan searing. Gin botanicals, in addition to being a nod to the English, also provide what the chef describes as the "most natural and familiar flavors" to pair with the venison. He incorporates these botanicals — celery root, cilantro, juniper, licorice and fennel — into the dish using the most modern of techniques. The juniper meringue that dots the finished plate is made with egg white powder, trimolin, isomalt and juniper. The celery puree, dyed bright green from blanched cilantro, is blended with xanthan powder to help bond it. The jus, a chicken stock fortified with beef and venison trimmings, is seasoned with freeze dried licorice and a 20 year sherry vinegar. But despite the modernity of the technique, the dish evokes classic flavors.