The 19 Styles of Japanese Cuisine Found in New York

Share All sharing options for: The 19 Styles of Japanese Cuisine Found in New York 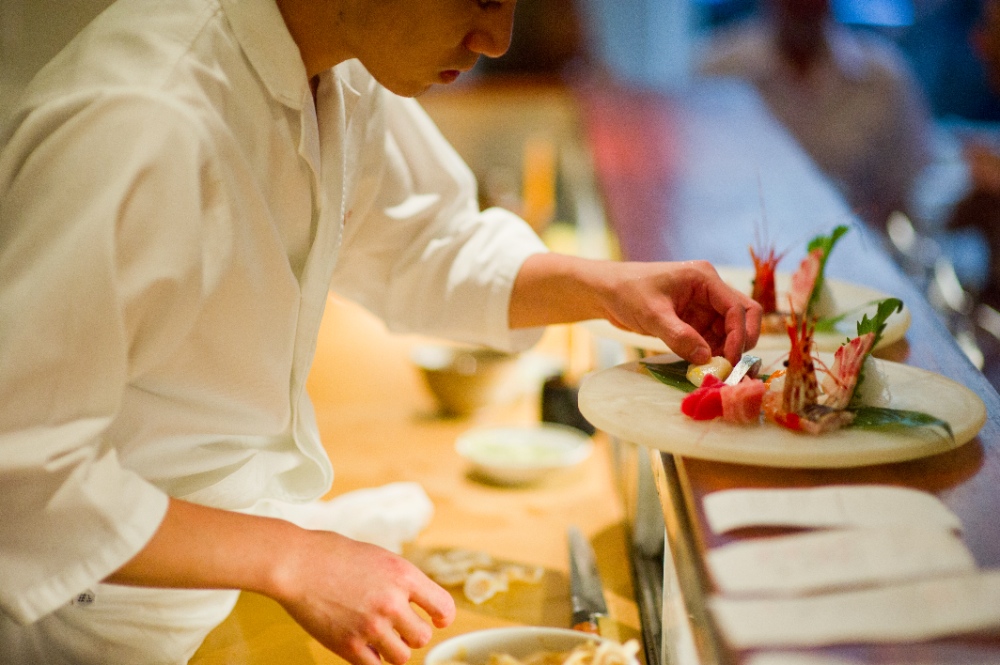 Inside 15 East by Krieger.

Japanese food. There's more to it than sushi and ramen. And naturally, New York, with its gastronomic diversity, is host to a multitude of styles of Japanese cuisine from low to high. Street food sometimes takes the form of takoyaki, grilled octopus balls from Osaka, and extends upward to Japanese fine dining or kaiseki, an intricate, multi-course meal composed of beautiful small dishes usually served on a tray. But that's not all. Seasonal sake, hot pots, and vegetarian Buddhist cuisine are all found and oft overlooked in this here city.

Going forward, this column will zero in on specific Japanese offerings in New York, but first here's an overview of what's out there. Note, certain styles of food vary ingredients based on regional locale. 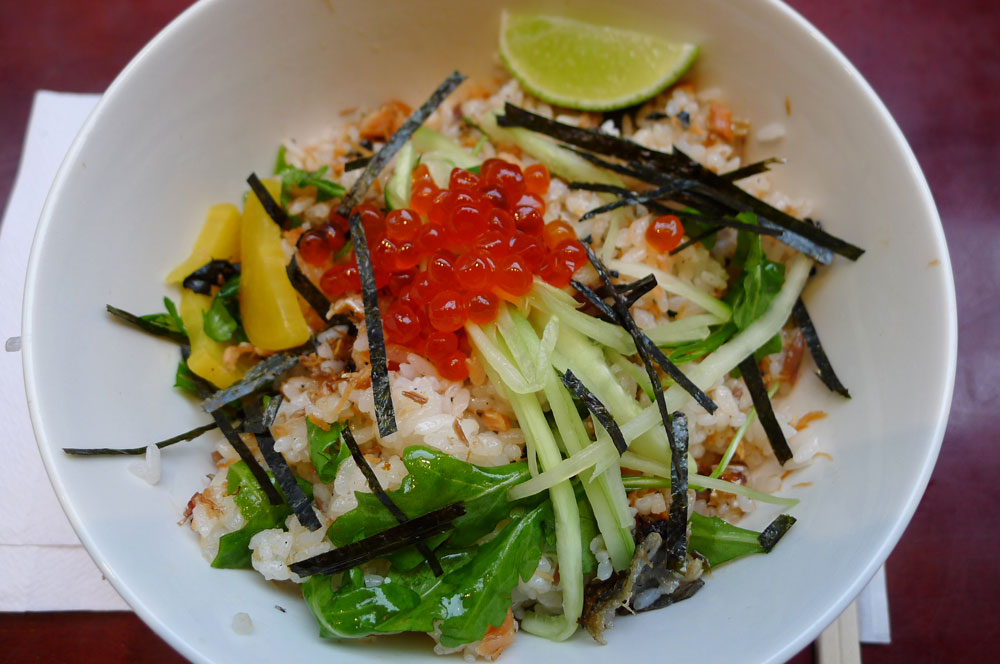 Basically a topping (meat, veggies, seafood) over white rice. Often refers to a mix of meat or seafood and veggies cooked together in a dashi, soy, mirin sauce (sometimes with egg added at the last minute) and served over white rice in a large bowl. One popular version of the dish is gyūdon, composed of beef and onion cooked in the aforementioned broth, served over rice. Donburiya in Midtown offers an abundance of rice bowl selections.

Often confused with teppanyaki, hibachi is a round or box-shaped pot with a grill fueled by charcoal and used to cook lightly seasoned meat, seafood, and vegetables. For example, yakitori is frequently cooked on a hibachi.

Kaiseki is a term to describe many small, intricate dishes served on a tray during a multi-course meal. The best known modern kaiseki restaurant in the world is Tokyo's RyuGin, which S. Pellegrino named the 33rd best restaurant in the world this year. In New York there are places like Brushstroke in Tribeca and Kyo Ya in the East Village, each of which have been reviewed in the Times, earning two and three stars respectively. 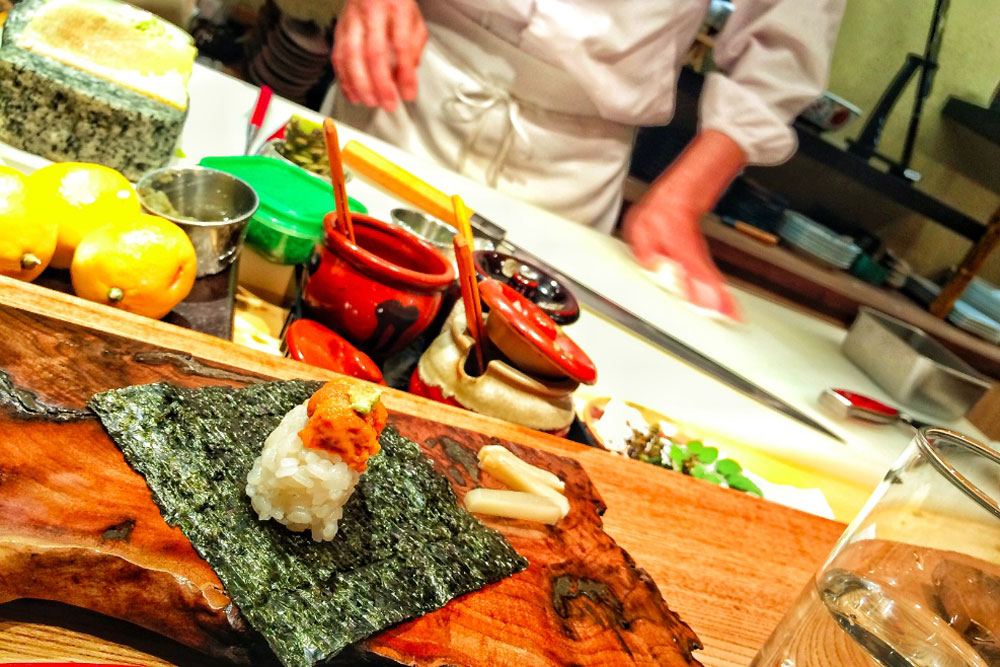 Uni at Cagen by Kat Odell

Kappo is the broad term used to reference multi-course prix fixe meals. Often customers sit at a bar from behind which the chef prepares a series of dishes both raw and cooked. Once the dish is complete the chef hands it directly to the customer. Kappo meals, like the ones served at Kura and Cagen, are generally more upscale and take into account seasonality. Omakase or chef's choice-style restaurants often serve a mix of sushi, kappo, and kaiseki.

Another popular street food and izakaya dish. Kushikatsu refers to skewered meat, seafood and vegetables that are dipped in flour, egg, panko bread crumbs and deep fried. There are usually sauces for dipping as well. Village Yokocho, the East Village izakaya home to excellent Japanese cocktail bar Angel's Share, puts forth a number of kushiage options from chicken to kabocha squash.

Think of oden as a type of long-simmered, hearty, dashi-flavored stew studded with an assortment of ingredients like hard boiled eggs, daikon, and fishcake. It's not the easiest of foods to find in Manhattan, but superb Lower East Side sake bar Yopparai offers a handful of iterations.

This Japanese cabbage-based pancake (similar to an omelette or frittata) is found throughout Japan. While the savory batter and toppings vary by region, it's usually filled with a mix of meat, seafood and vegetables then topped with mayo, okonomiyaki sauce (similar to Worcestershire sauce), shaved bonito flakes, green onion, and seaweed powder. In Japan one will find restaurants that specialize in okonomiyaki, but here in NY izakayas are the best way to go for a taste. Drop by Sake Bar Hagi in Midtown.

Onigiri, which is also known as omusubi, is a compressed Japanese rice ball. Though fillings vary, plain salted white rice is formed into a triangle or oval, stuffed, and then frequently wrapped in nori. Traditionally, the rice balls came packed with salty or sour ingredients like ume (sort of like a salty, pickled plum), but nowadays one can find more creative versions. Onigiri By Tampopo, a stall at mini outdoor food court Broadway Bites, sells its rice balls flavored with garlic miso and wasabi shrimp. 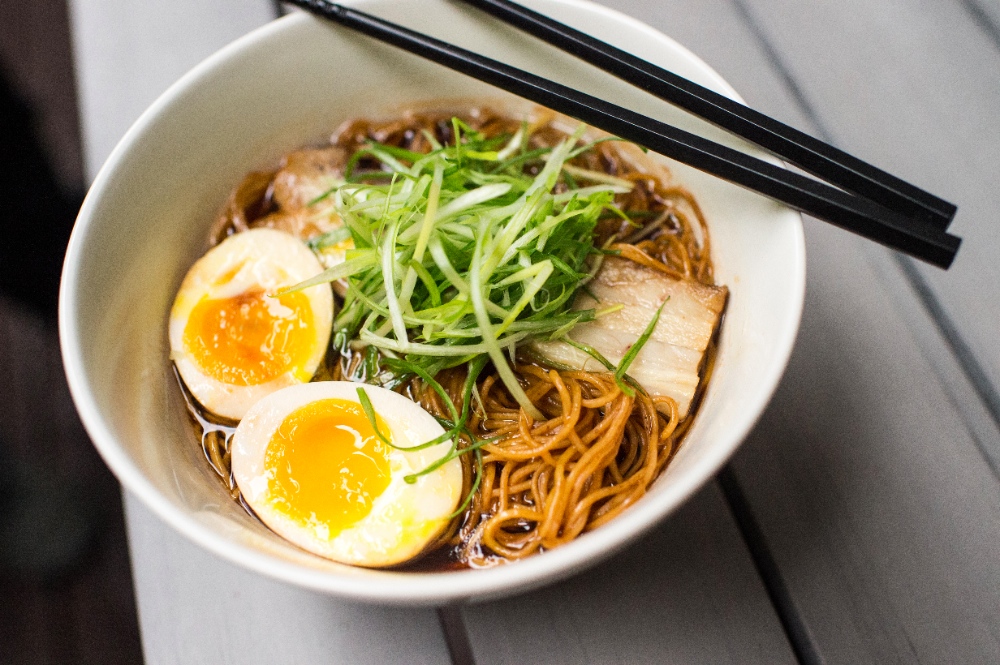 In recent times New York has experienced a ramen boom, with old school players like Ippudo now competing with hipper, American-run joints like Ivan Ramen. And just the term "ramen" itself is the gateway into scores of soup styles hailing from prefectures throughout Japan. Tonkotsu is built on fatty stocks made of boiled pork bones as compared to the lighter shio ramen or "salt" ramen. Noodles vary, too.

One form of Japanese-style grilling is robata. Meats, fish and vegetables are cooked on skewers over an open bincho (charcoal) hearth. NY's Aburiya Kinnosuke is an izakaya that specializes in such cookery. 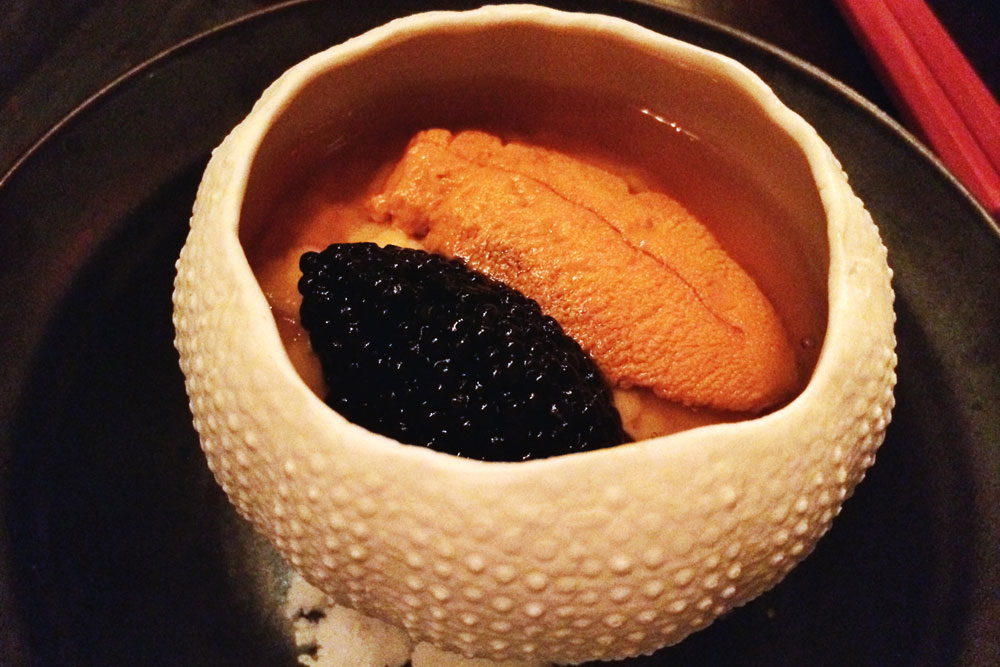 Egg on egg on egg at SakaMai by Kat Odell

To experience a taste of Golden Gai, the famously compact drinking row in Tokyo's Shinjuku neighborhood, look no further than Decibel, a sake bar on 9th Street and 2nd Avenue in the East Village. Golden Gai is notorious for its 200 tiny themed bars and eateries, many of which contain between two and six seats, crammed next to and on top of each other on just six narrow streets. Likewise, the cramped Decibel, situated down a set of stairs and below a lit sign that reads "On Air," offers just a handful of tables. But the main attraction here is the sake bar which seats about five people at once side by side along an uncushioned banquette. The place itself is colored by graffiti walls with rows of inverted sake bottles (sake "on tap") behind the bar. To say the least, it's a unique New York experience.

Like many izakayas — basically a Japanese pub that offers food — Decibel serves a fairly lengthy list of alcohol-friendly Japanese small plates considering its size. SakaMai on Ludlow at Stanton is another example of an izakaya and sake bar, though more upscale with American and European nods. Here one might find a foie gras chawan mushi (egg custard) and uni plus sturgeon caviar over scrambled eggs.

Japanese shabu-shabu is a form of cooking in which the diner uses chopsticks to quickly cook slices of raw meat and vegetables in a pot of simmering water. It's considered a healthier style of eating since the ingredients are simply boiled and then dipped in a sauce flavored with soy or sesame. Once all ingredients are cooked, the boiling water is transformed into a soup. Shabu-Tatsu in the East Village presents such a style of dining, as does longtime staple Shabu-Shabu 70 in the Upper East Side. 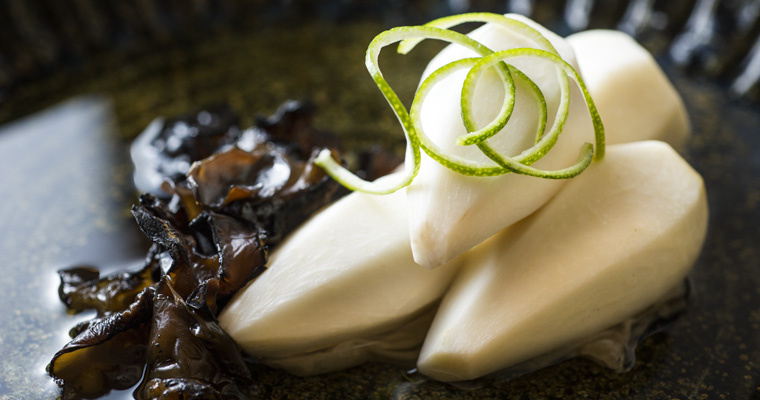 A prime example of Shojin cuisine, or vegetarian cooking that originates in Zen Buddhism, is found at Kajitsu in Midtown. A shojin meal is devoid of fish and meat, and even root vegetables (uprooting a root vegetable kills the entire plant). Seasonal and usually local (non root) vegetables, fruit, and grains form a shojin meal that's usually composed of many different plates. The idea behind this is to serve a visually pleasing, complete and balanced meal that incorporates a variety of flavors, textures and colors.

Almost like a cross between shabu-shabu and teppanyaki, sukiyaki is a form of hot pot cookery in which thinly sliced beef, vegetables, and noodles are cooked at a table in a shallow cast iron pot in a broth of soy, mirin, and sugar. After the ingredients are cooked they are dipped in a bowl of raw egg. Momokawa, a Kyotan restaurant with locations in Kips Bay and Tokyo, presents sukiyaki for two centered on Berkshire pork or beef. 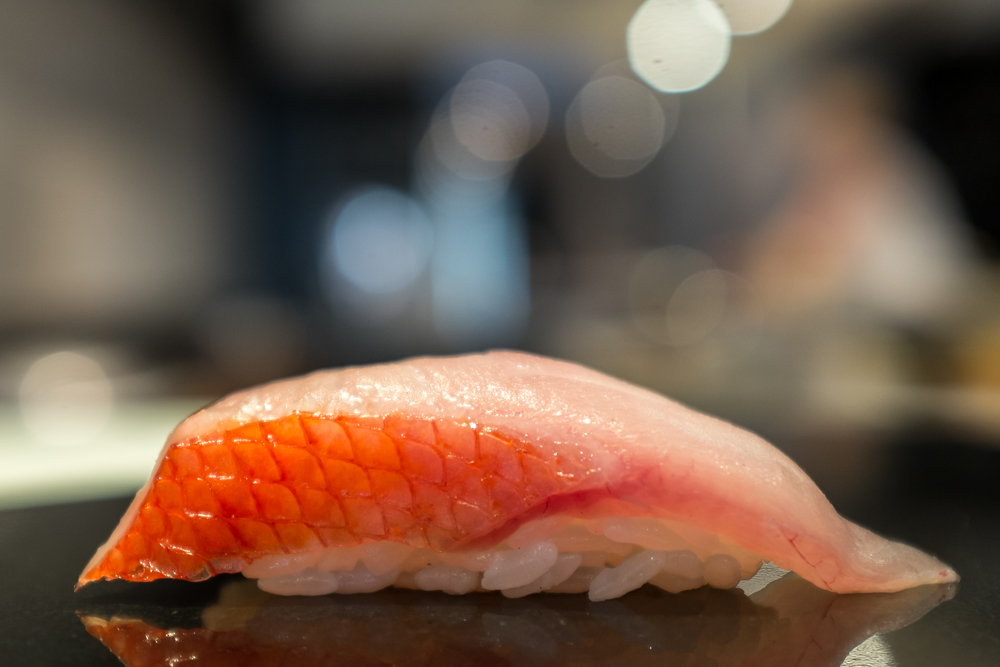 One of the most ubiquitous and subsequently familiar styles of Japanese cuisine is sushi. This all encompassing term refers to seasoned rice and seafood (or veggies), and is the umbrella title for maki (cut rolls) and nigiri (mounds of rice that support fish). Sashimi, raw seafood without rice, is in its own category. Then there's chirashi, which is a bowl of seasoned rice topped with raw fish, veggies, roe, and other ingredients. Similar to chirashi is kaisendon, or a bowl of plain (unseasoned) white rice topped with a spread of sashimi. New York is host to a plethora of sushi restaurants that will and won't break the bank. At the top is Masa, notoriously the city's most expensive restaurant, but for less pricey, high quality eats try 15 East or Sushi Azabu, the "secret" sushi bar below Daruma-Ya. 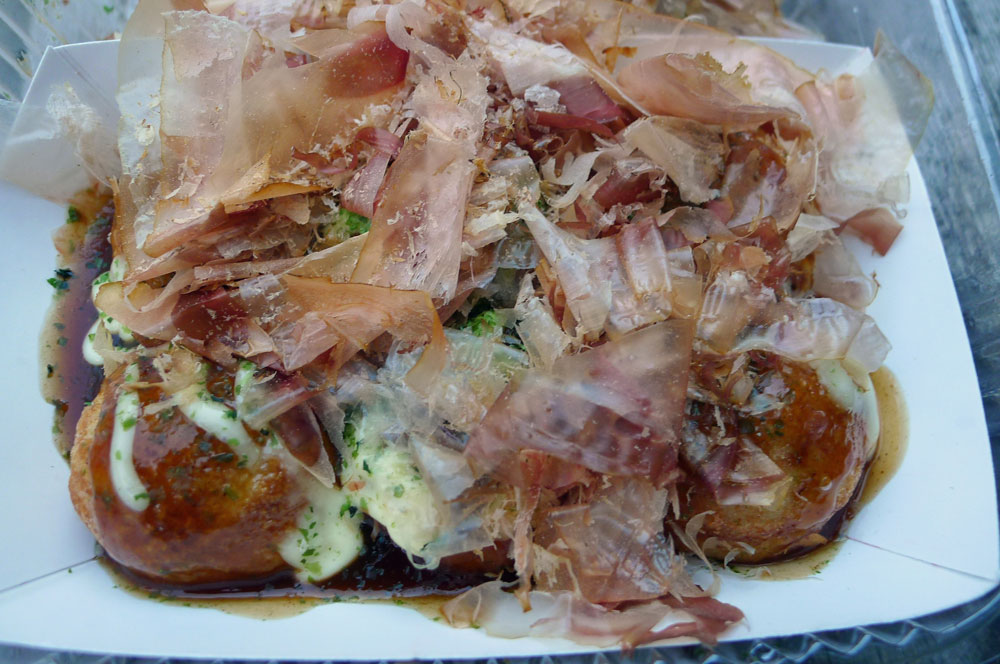 Takoyaki is a Japanese snack, also considered Japanese street food, that is believed to have originated in Osaka. It's an octopus ball composed of a wheat flour batter mixed with octopus bits, green onions, and ginger, cooked on a cast iron grill filled with spherical molds. Traditionally the balls are topped with Takoyaki Sauce, mayo, bonito shavings, and seaweed. Hit up Otafuku to taste. (Protip: While there also go for taiyaki, a fish-shaped pancake filled with red bean.)

Teppanyaki is lightly seasoned meat, seafood, and vegetables cooked over an iron griddle. Benihana is the most famous example of such a restaurant. 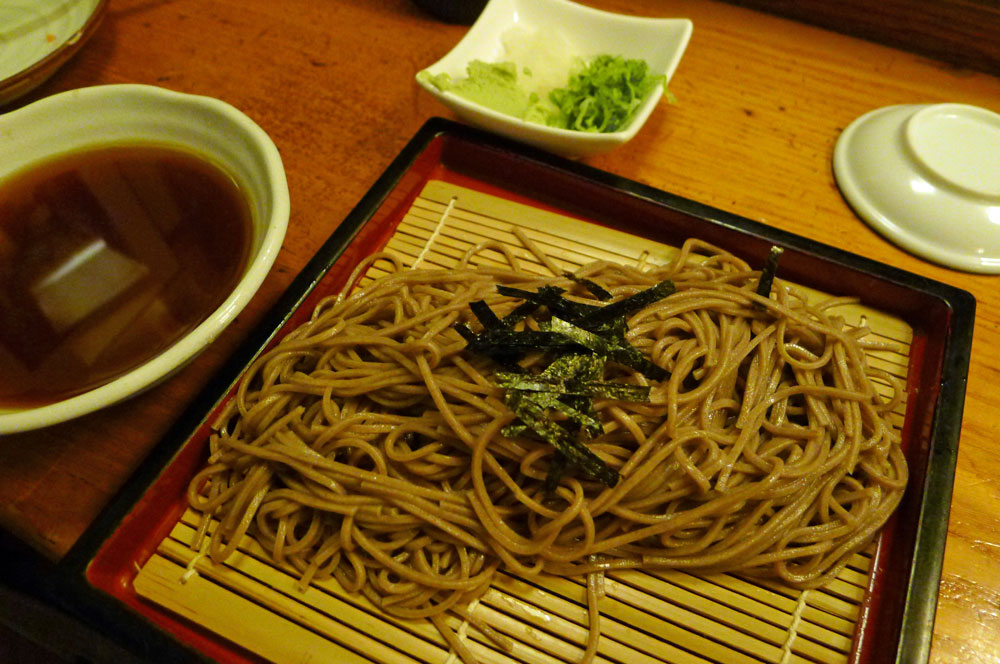 Udon and soba often have their own set of dedicated restaurants. Udon, a thick chewy wheat flour noodle usually served in a hot or cold broth, can be found at Soba-Ya. An East Village restaurant which, as its name suggests, also offers an abundance of soba dishes. Soba refers to thin noodles made from buckwheat flour usually served chilled with a dipping sauce or in a hot broth.

Wagashi are traditional Japanese sweets often usually served with tea and made from plant-based ingredients. The most popular example of which is mochi. Try Cha-An in the East Village. If red bean butter toast with black sesame ice cream; and green tea, black sesame, and earl grey chocolate mochi sound appealing (yes, all of the aforementioned are made in house), then head upstairs to check it out. Fun tip: Cha-An also holds occasional mochi-making classes.