Food Can't Stand Up to the Drinks at The NoMad Bar

Share All sharing options for: Food Can't Stand Up to the Drinks at The NoMad Bar

Amid all the fine talk about hospitality and (salutary) diner background checks, it can be easy to overlook the fact that Will Guidara and chef Daniel Humm, two of America's most guest-oriented restaurateurs, run a collection of very expensive places to eat. A wine-paired lunch for two at Eleven Madison Park can cost just shy of $1,000, while an evening date at sister spot The NoMad, serving chickens for two at $82, can easily hit $275.

Luckily, Humm and Guidara have finally given us a casual spot. It's called The NoMad Bar, and it's just next door to the eponymous restaurant in the Garment district. The draw is simple: a stunner of a room, some of the city's finest cocktails, plus burgers, dogs, and other snacks one might encounter at P.J. Clarke's, Yankee Stadium, or even a corner deli. 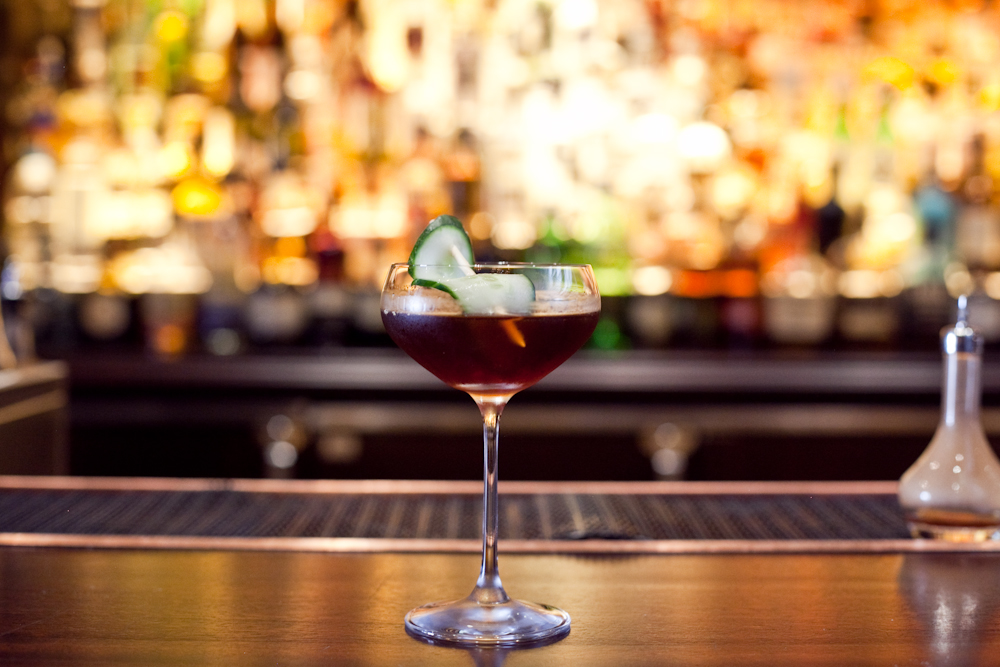 There's just one catch. Frankfurters are $14, ham sandwiches are $16, and the burgers with fries are $26. Part of the magic of the hospitality industry is convincing guests to part with a little bit more of their disposable income than usual in exchange for a product that's more delicious than usual. Thing is, the food actually has to be delicious.

"This tastes like it came from the freezer section of Costco," my companion said while eating what The NoMad generously described as eggplant "beignets" ($12). The little patties are filled with scalding cheese and minuscule bits of the sweet nightshade. Just as "meh" is the fried chicken ($14), which turns out to be boneless, McDonald's-style chicken fingers, with the bland, factory-quality strips exhibiting little poultry flavor. Then there's tuna tartare ($19), with as much mouthwatering succulence as morning oatmeal. 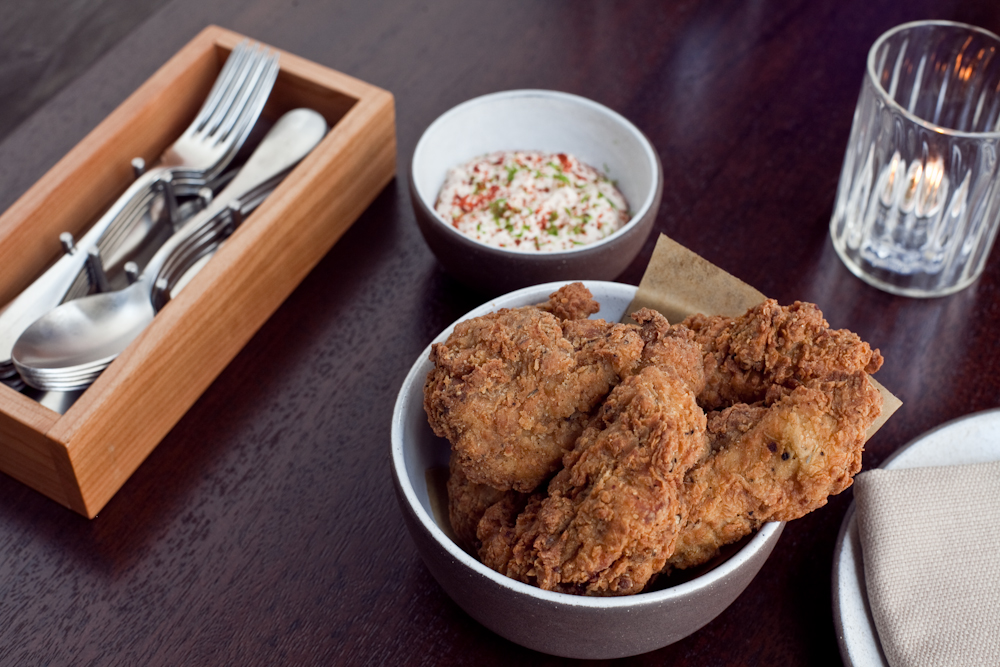 It's a shame, really, because New York has undergone a promising pub grub revolution over the past half-decade, with venues like Alder re-inventing the wheel — clam chowder with oyster crackers that actually taste like oysters — or ambitious cocktail bars like PDT serving up grade-A frankfurters.

Compare that with the $14 black truffle dog at The NoMad Bar, a luxury in cost only; the dense, almost mealy tube steak sports just a modicum of fungi flavor. Just the same, striped bass has all the under-seasoned taste of something that came out of a Long Island seafood shack, which would be great if you were paying Long Island prices, not $19 for two small filets on a stick. And a Boar's Head-quality ham on pretzel bread is less about technique, more about selling economy-class sandwich ingredients at a business class fare ($16).

The mediocrity of the kitchen overshadows the warm service and epic drinks.

Those dishes are the epitome of average, with neither the clean execution nor the requisite creativity to move the culinary conversation forward. And that's too bad because the mediocrity of the savory kitchen, under the authority of chef James Kent, threatens to overshadow the warm service of general manager Jeffrey Tascarella and the epic drinks of Leo Robitschek.

In fact those who treat The NoMad as a cocktail bar alone will find not just a new neighborhood staple but a citywide destination. Take a seat at the bar and ask for something with Islay Scotch, as few other bartenders make such compelling creations with the peaty potable. Robitschek uses egg white, applejack, and amaro Montenegro to simultaneously show off and temper the smokiness of an Islay pour in his "Scotch Dumpling." He does the same in his "Improved Whiskey Cocktail," stirred like an old fashioned and with just enough oomph to let you know what you're drinking. Best of all is the North Sea Oil, where all the haute-ashtray essence comes through unabated, with just enough sweet Cocchi Americano and triple sec to tame the alcoholic fire. Stunning. 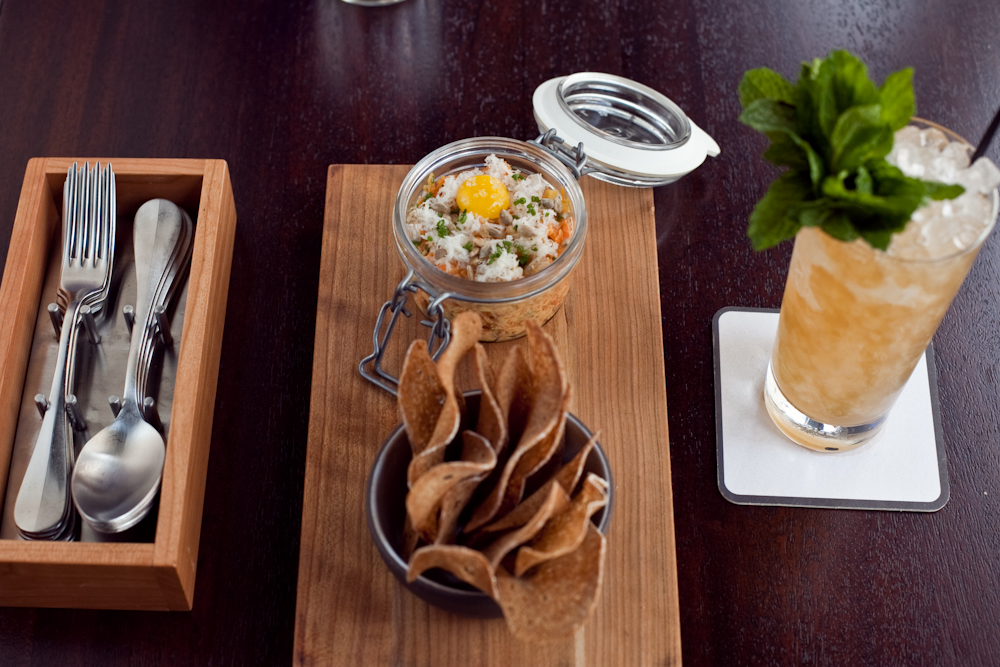 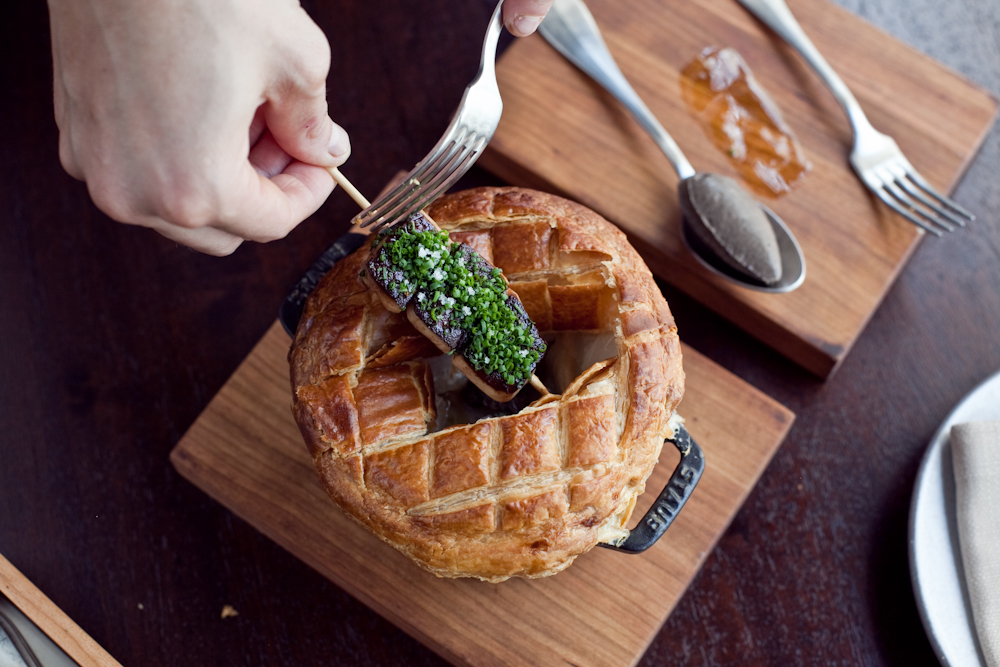 Sometimes culinary innovation succeeds. Carrot tartare, a hat tip to the version once served at Eleven Madison Park, is sweet and crunchy, with just enough mustard to make you wish every coleslaw could taste like this. Raw scallops seem to vibrate in the mouth with the zing and zap of yuzu, while the unexpected crunch of pistachio brings out the gentle nuttiness of the shellfish. Sometimes creativity falls flat. Instead of Scotch eggs, where the saltiness of sausage is tempered by a soft boiled egg, we get Scotch olives — bite-sized sodium grenades.

Try the bone marrow and suet-laced burger; it sports a soft, pate-like texture and a gentle, dry-aged funk. It's $18, or $26 with fries — whether you think it's worth $5 more than the game changing lamb burger with fries at The Breslin (just around the block) or $12 more than the burger with fries at DBGB (on The Bowery) is a different story. The $36 pot pie is fine too; knobs of chicken thigh pack as much flavor as the foie gras and black truffle it mingles with.

Desserts are flawless, from a house-made caramel chocolate bar that's good enough to sneak into the movies, to an haute-riff on an Oreo, where dark chocolate cookie crumbs are shaped like Lebanese kibbeh and stuffed with ice cream. Like the cocktails, the sweets are the type of treats we've come to expect from Humm and Guidara. With time, I'm sure the savory kitchen at The NoMad Bar will start putting out food that warrants the respect (and prices) that this restaurant group normally commands. Until then, drink up!

Our review of NoMad Restaurant

Cost
Most dishes under $19 but you'll easily spend $100 per person.
Sample dishes
Scallops, carrot tartare, burger, any dessert. Try the pot pie in December.
What to drink
Any cocktail, at $16 apiece. High rollers can indulge in the reserve list, which includes a $198 Vieux Carre.
Bonus tip
Walk-ins only. Skip the ho-hum $6 bread, as well as the mushy baked clams.