El Rey, A Welcoming, Good For You Luncheonette in LES

Share All sharing options for: El Rey, A Welcoming, Good For You Luncheonette in LES 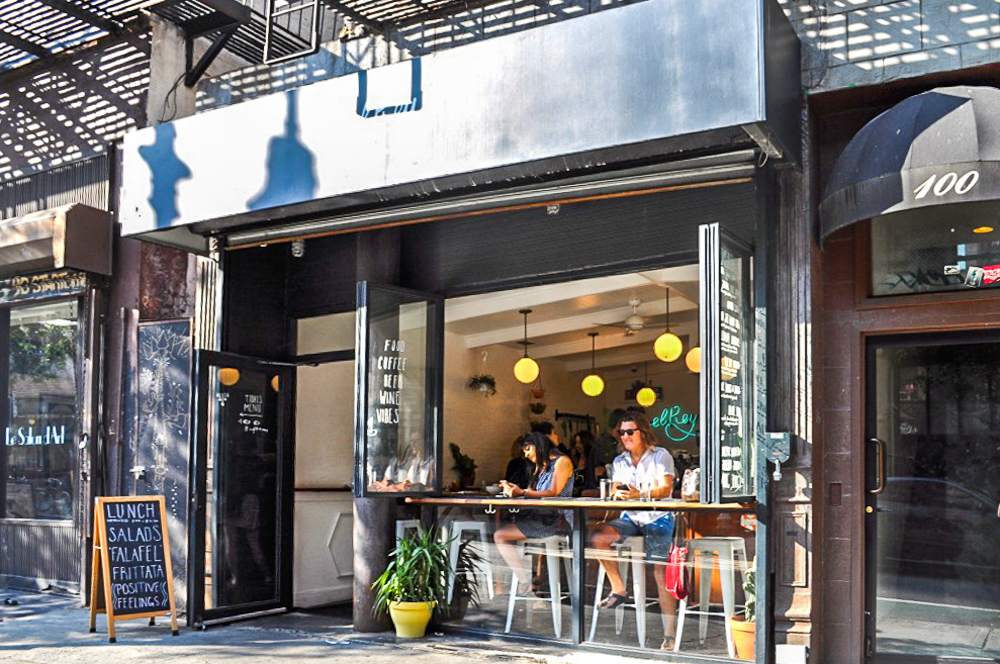 The sign outside El Rey Coffee Bar & Luncheonette on Stanton between Orchard and Ludlow in the Lower East Side reads "Lunch Salads Falafel Frittata Positive Feelings," and that's exactly the wholesome, veggie-rooted menu chef Gerardo Gonzalez serves up daily to a hip neighborhood crowd where most know him by name.

El Rey came to be last September thanks to trio Nick Morgenstern, Sam Wessner, and Gonzalez. Morgenstern also has the late Goat Town, which he's reworking into GG's, and this summer he gave the city a new reason to geek out over frozen cream thanks to Morgenstern's Finest Ice Cream, a shop that takes a fine dining approach to ice cream, scooping five different types of vanilla plus flavors like sesame caramel and banana curry. 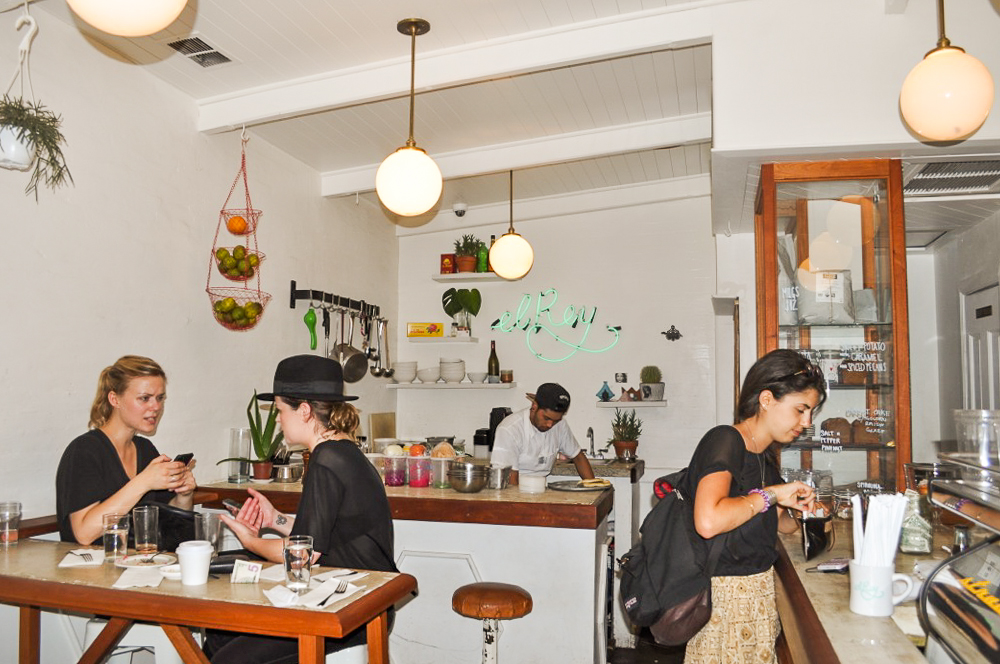 Five years ago, when Morgenstern was still involved as owner of The General Greene in Brooklyn, he hired Gonzalez as his intern, and the partnership proved successful enough that Gonzalez eventually moved on to take the sous chef title at Goat Town. He also served as master gardener, taming the property's expansive rear garden. But four years later, he moved over to open El Rey, heading up the coffee bar's early baked goods program.

Gonzalez had never baked before El Rey, which in incredibly hard to believe for anyone that has tried his sweet potato bread with caramel and spiced aleppo pecans or pine nut salt and pepper sandies. In fact, when Gonzalez attended the Culinary Institute of America in St. Helena, his worst grade was in baking and pastry: "I think that's why I got a bad grade because I was always doing weird flavor combinations ... I remember doing a scone with cream steeped with oolong tea and there was white chocolate in it and I thought it tasted like seaweed and I loved it. And nobody else liked it." But, those unexpected flavors applied to baked goods and wholesome veg/grain-forward dishes, plus an artistic approach to plating, is now what's charming El Rey regulars. 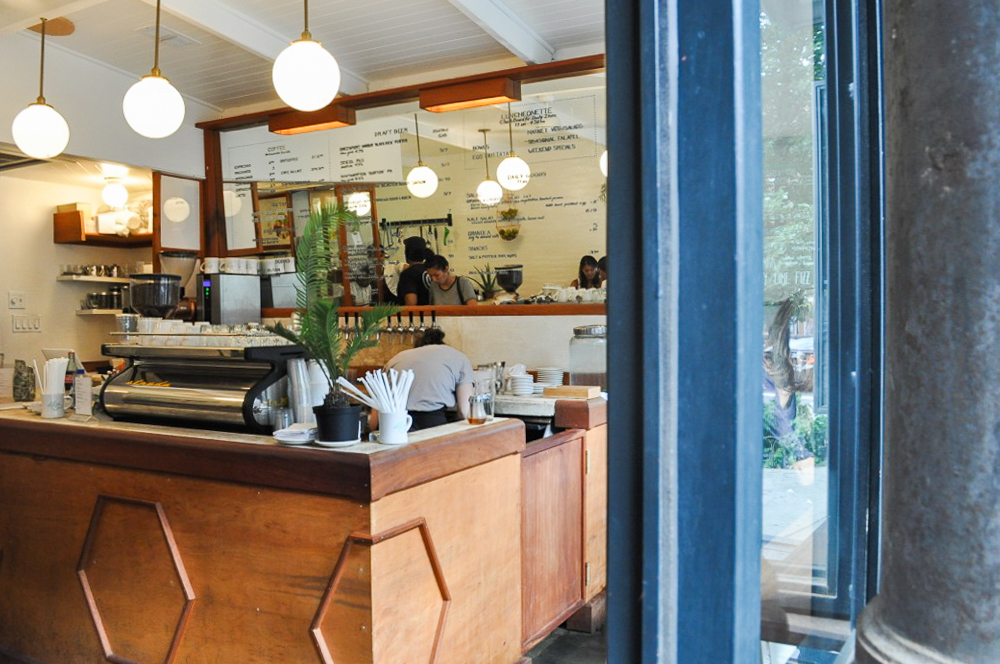 All three partners have an affinity for design, apparent from the cafe's fresh SoCal-inspired look that Morgenstern and Wessner determined together and Gonzalez's vibrant plates. Initially, Morgenstern and Wessner set out to conceive a casual, European-inspired coffee bar serving morning till night. They wanted an informal place with high tables for customers to stand and have a coffee and pastry. But, what they learned almost immediately is that their neighborhood wanted more. And within five months, Lower East Side denizens had seats, food, plus an airy, laid-back place to hang with friends. 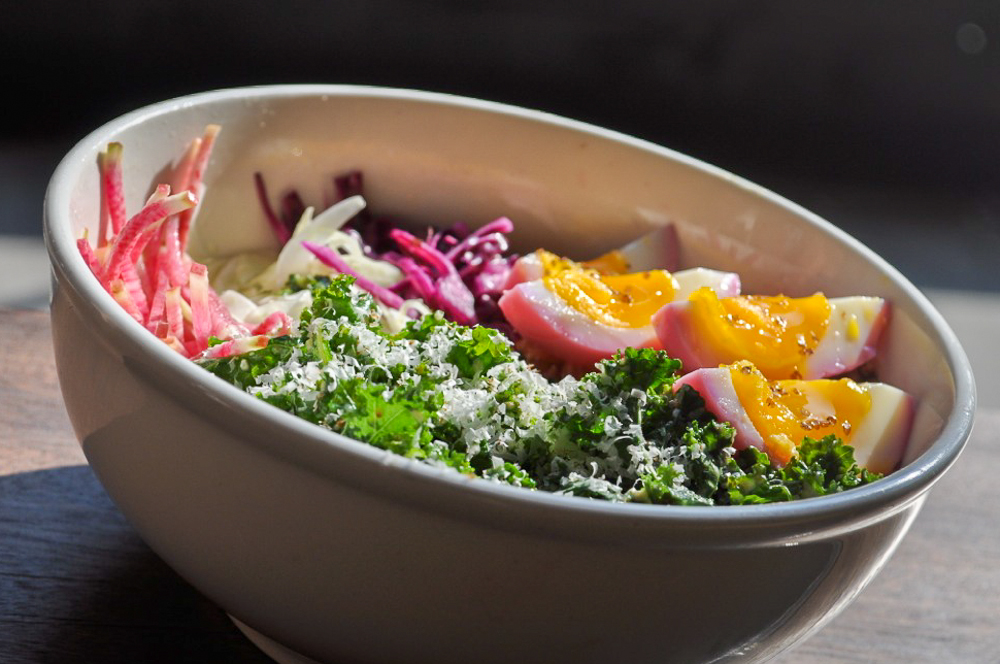 As Wessner puts it, much of what El Rey has become is a reaction to the neighborhood. He describes the Lower East Side as a dirty, loud place, which makes the bright, white-washed El Rey a gem in the rough. And surprisingly, there aren't a whole lot of healthy eats in close proximity. So, in an effort to offer the neighborhood something absent yet desired, Gonzalez, whose parents are from Jalisco, Mexico, is plating up a concise, coastal Southern California menu inspired by Tijuana and Baja.

El Rey brews sustainable Durham, North Carolina-based Counter Culture espresso beverages. And while a quarter of its menu is vegan, there is dairy for drinks by way of Battenkill Valley Creamery in Salem, New York. 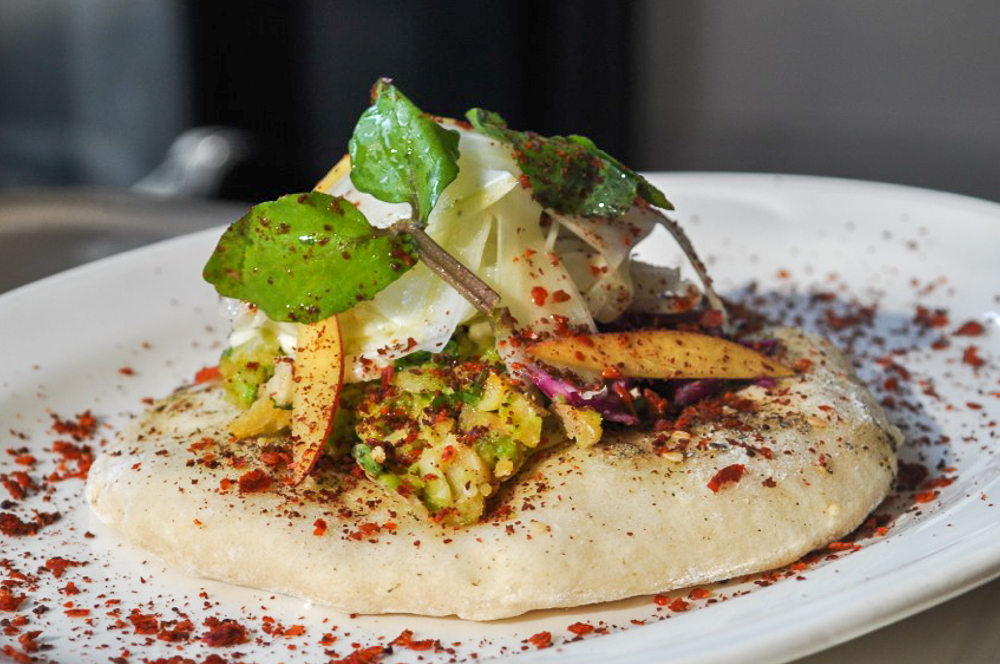 Take note, there are only seven items on El Rey's core menu, in addition to baked goods and specials, which change day to day. The best part of those specials though is that sometimes the key ingredients like tomatoes, squash, or watermelon are brought in by regulars who have local gardens. Gonzalez says that whenever a customer brings in fruits or vegetables for him to use, he always tries to make something special. But other limited-run dishes, like the raw green mole he recently sampled, incorporate ingredients sourced from the Union Square Greenmarket.

One of the more substantial bowls and El Rey's top seller is the grains and crudite salad, which comes with a base of farro, toasted pecans, and lemon-dressed watercress. It's topped with watermelon radish, pickled red cabbage, chimichuri fennel, and kale salad with shaved almonds and almond vinaigrette. Another strong choice is the deconstructed falafel with crushed chickpeas and avocado, raw cauliflower, shaved fennel, mint, watercress, rice vinegar-pickled peaches, pickled red cabbage and black sesame served on house-made pita and dressed with chimichurri then dusted with Aleppo pepper and sumac. 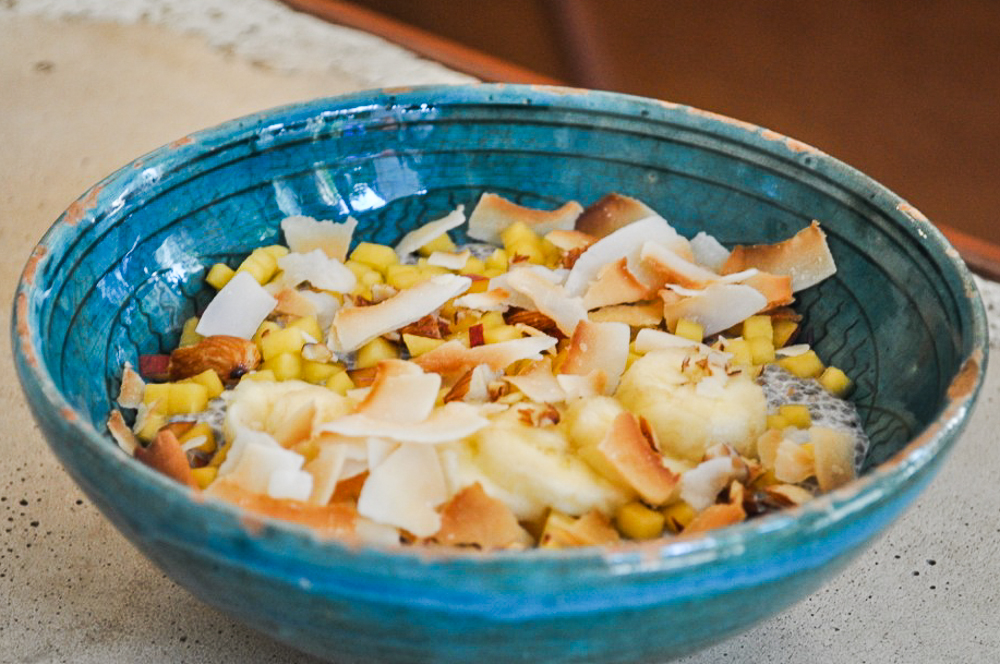 Despite the cafe's tiny size, about 300-square feet total, Gonzalez is baking fresh pita right behind the rear counter. And that warm, chewy bread makes all the difference. Meanwhile his rotating selection of carbonated waters, available on tap, are flavored with uncommon teams of ingredients like elderberry-lime, cucumber-tarragon-lime, mulled hibiscus, and cascara, the cherry of the coffee plant.

Gonzalez and the team never set out to serve a vegetarian or vegan menu. It happened mostly as a result of spacial constraints. Early on he prepared a pork dish over vegan cashew grits made from cashew, almond milk, and house-made cashew cheese. But he learned that handling meat in a small area proved more challenging and eventually switched over to veggie and grain-based plates. Now that El Rey is almost a year old, he's looking to bring this dish back for colder months. Overall, Gonzalez strives to serve a wholesome, light menu that's filling but won't leave you feeling sluggish. He aims to offer a mixed healthy bill of fare in which a carnivore, raw foodist, and macrobiotic can all eat enjoyably in one space. Proof? Just try the new raw vegan spirulina bar. 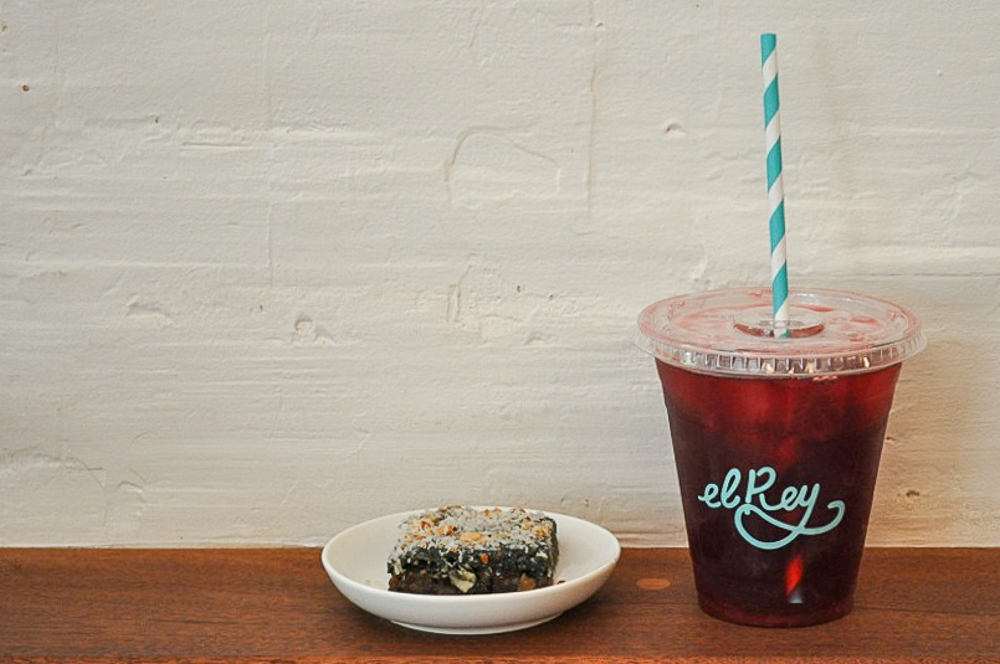 Around 4:30 p.m. daily, El Rey ceases food service in favor of beer and wine plus evening coffee. But, anyone that stumbles in, hungry, after 4:30 p.m. can ask Gonzalez for a bite and it's likely he'll oblige. "I'm usually a big pushover. Just ask and I'll make it," he concedes with a smile. Going forward, the chef is working on more grab and go items for sale during the day and is looking to amp up dinner service and possibly even launch a prix fixe dinner menu served two nights a week.

But El Rey is a tiny operation, and ultimately the 5-foot by 3-foot kitchen dictates how much can or can't hit the menu. Call it inconveniently charming, the sometimes claustrophobic, chaotic atmosphere of diners and serves bumping into each other in such tight quarters results in a unique experience for the customer, and at El Rey that clumsy intimacy is welcome.
· All The Green Scene Coverage [~ENY~]