Share All sharing options for: The Breslin's Lobster Boil Keeps the Summer Going 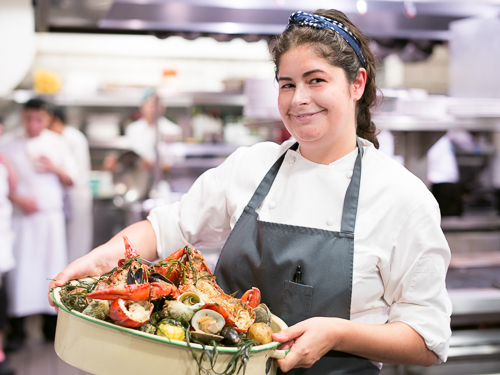 "This is a chance to do something with seafood at The Breslin and expose a different side of what we do," says chef Christina Lecki of the large format lobster boil feast. Despite The Breslin's reputation for being a monster meatery, Lecki is no stranger seafood: she helped open The John Dory, the Breslin's sister seafood restaurant next door. It didn't take much for Lecki to convince chef/owner April Bloomfield, who is an avid fisherwoman and clammer, to add the broil — "we just had to source everything as locally as possible."

Thus the clams come from Long Island and the lobster, mussels, and whelks from Maine. The latter ingredient is a nod to Bloomfield's heritage, and gives the dish what Lecki describes as an "British vibe." Lecki chose to grill the lobsters, rather than simply steaming them, to add a smokiness to the proceedings and to make the feast a little easier to eat. The rest of the dish is boiled in a large pot in a broth of onions, celery, fish stock, and a mix of pilsner and IPA beer, which give it some "sourness, but not too much funk". The corn, potatoes, and clams, which Lecki describes as "tough little buggers," go into the broth first because they take longer to cook. She them layers the rest of the ingredients according to cooking time. The resulting pot is enough to feed at least eight, but note that reservations must be made in advance.