Let's get right to the meat of matter: Root & Bone serves New York's best new fried chicken. In fact I'll go even further: This young Alphabet City spot sells some of the most ambitious poultry of the past half-decade.

Here's how it's done: Top Chef alums Jeff McInnis and Janine Booth take a Pennsylvania Amish bird and brine it in sweet tea, onions, and garlic for 24 hours. Then they dredge it in flour, deep fry it, and sprinkle it with dehydrated lemon powder. The flesh is (assertively) salty yet sweet. The crunch is marked. And thanks to the citrus "dust," it all has a fragrant finish that recalls a gourmet version of the coating on a Haribo Gummi Peach. On the side, there's a bottle Tabasco-spiked honey that starts off spicy and ends with a wave of sugar. It's not just good, it's unmistakably unique. You could close your eyes, taste this dish, and know it didn't come from anywhere else.

When compared with the ranks New York's most distinctive fried chicken — the Korean-wings at Boka, the Old-Bay-spiked Bell & Evans breasts at Momofuku Noodle Bar, the classic extra tasty crispy stuff at Pies n Thighs, the surprisingly delicious boneless variety at ABC Kitchen, and the habanero-laced bliss at Ma Peche — Root & Bone's bird is no less exemplaryI'm not so amped on this chicken as Sutton is, though it's very nicely fried — to me it's too darn sweet by a mile, and I like my chicken savory — Sietsema. And the price is right too — $18 for a half-order (feeds two), and $35 for a full one.

Looks like McInnis and Booth have themselves a winner, which perhaps explains why the wait can reach 60 minutes or longer during peak eating. Not bad for two out-of-towners; McInnis is a Florida native who grew up in Alabama while Booth is an Australian who cooked with Jeff at Yardbird in Miami. 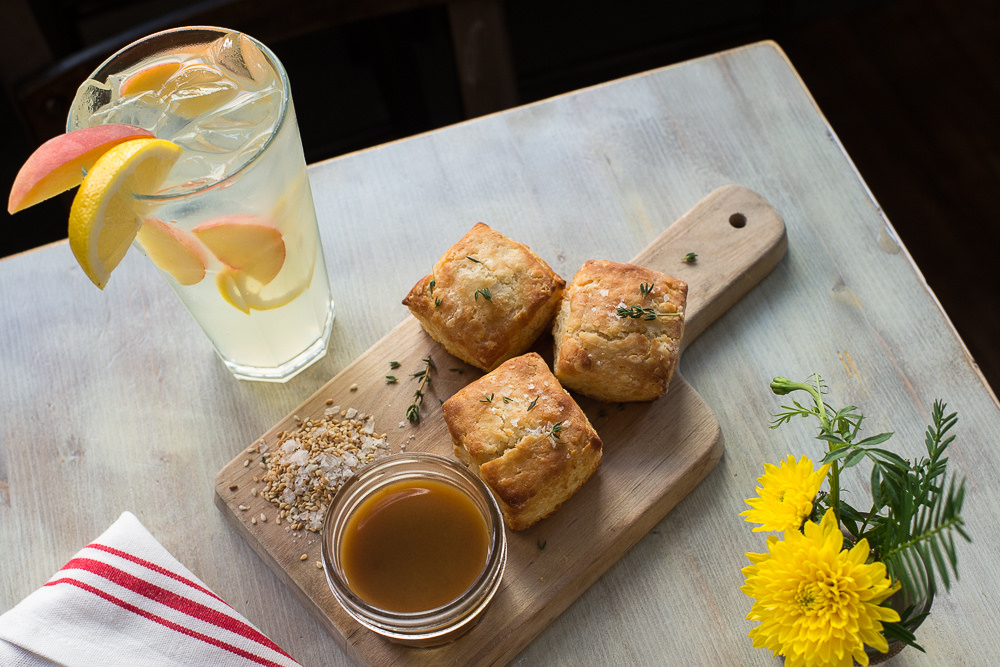 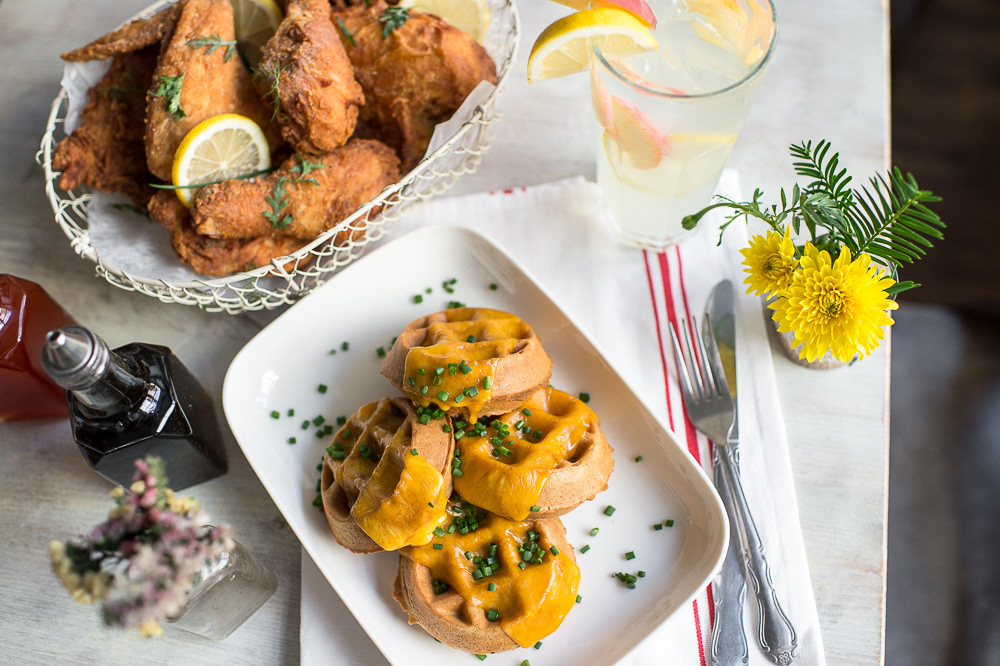 Barbecue and uptown soul food notwithstanding, the diverse edibles of the South, which are so often synonymous with the notion of a larger American cuisine, have never really established as strong of a foothold in serious New York restaurants as French, Spanish, Italian, or Mexican cooking. Root & Bone, like Joaquin Baca's excellent Brooklyn Star, is an essential outlier in this regard, taking a local and seasonal approach to comfort food. And while it's far from perfect — the deviled eggs are as average as anywhere else — Root and Bone's kick-ass classics give hope that New York can play a legit role in not just honoring the foods of the South but also in moving the culinary conversation forward.

Thyme-topped biscuits, whose fluffy layers seem to peel off like a magically glutinous onion, are excellent by themselves. But what makes the dish approach greatness is the accompanying bowl of honey-roasted gravy. The flavor is deep, round, and rich at first, then gives way to a restrained sweetness.

There are few other savory chefs who deploy sugar with such aplomb as McInnis and Booth.

Indeed, there are few other savory chefs who deploy sugar with such aplomb as McInnis and Booth. They tone down the vegetal notes of mashed parsnip with a gentle maple sauce. They take a Kurobuta pork chop and inject a world of flavor into it with a heady peach-bourbon syrup. It almost veers into cloying territory until the sting of chili shocks the palate back into order, and a soft nugget or two of pork belly adds a musky uppercut.

That 18 oz chop is enough to feed two as a second course, or a solo diner as a one plate meal, a recommended move as many of the appetizers are entirely forgettable. Deconstructed BLTs turn out to be jaw-aching slabs of bacon with bland pimento cheese and ho-hum fried green tomatoes. Even worse are fried chicken and waffle sandwiches, two leaden gut bombs stuffed with overly-fatty thigh meat. And corn on the cob is doused in a one-note cornbread butter and stale popcorn. SELL.

Noise levels can reach 90 decibels or higher in the 45-seat restaurant, but give credit to the McInnis and Booth for throwing together a sexy duo of rooms, with pressed-tin ceilings (partially covered in matching silver masking tape) and a gorgeous "open air" dining counter that overlooks 3rd. Waiters actually exit the restaurant and serve guests from the sidewalk, a clever people-flow strategy that keeps the slim dining room from getting too crowded. 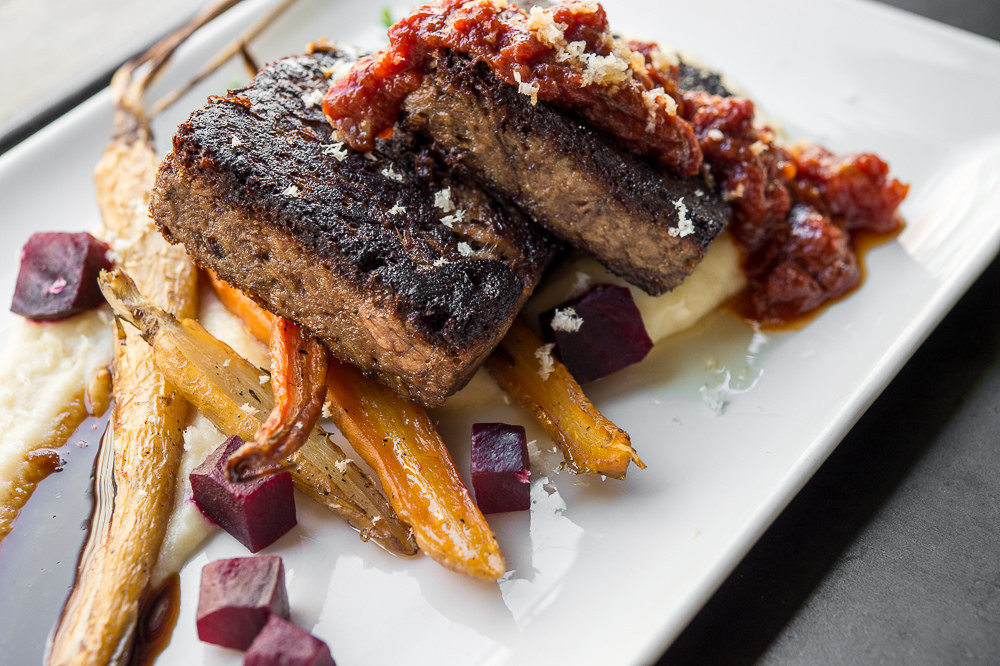 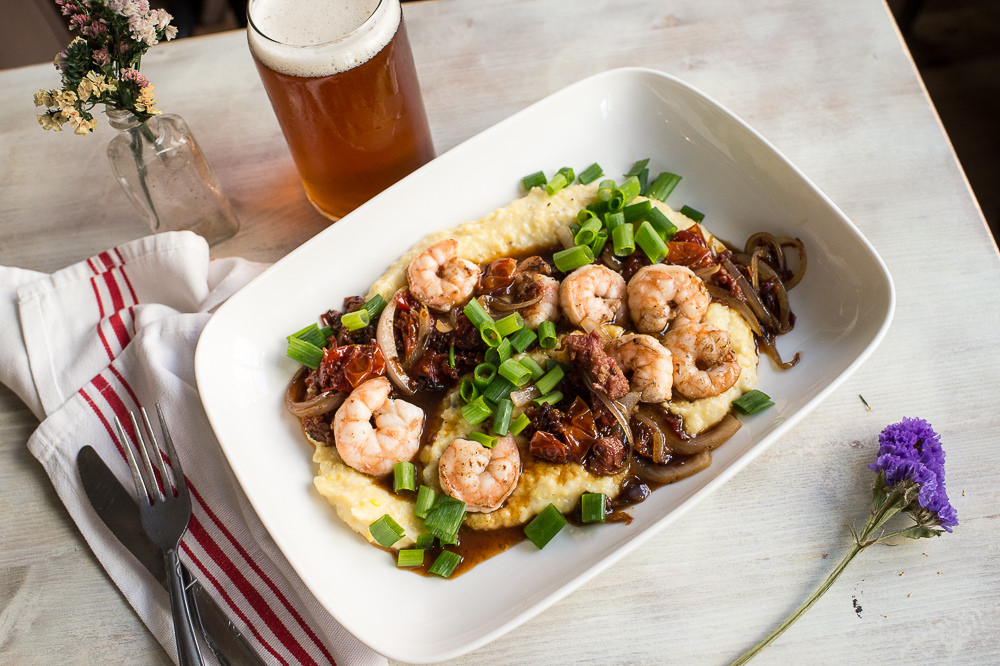 The sides are stellar, waffle cut fries with dill pickle remoulade would be a best-seller at any Major League ballgame, and the caprese salad, with tart green tomatoes and grilled peaches, approaches near classic status thanks to a few drops of malty molasses vinegar subbing in for balsamic. Meatloaf isn't really meatloaf, but rather a shredded, $24 square of short rib disguised as brownie. The red wine tang and griddle-crisped beefiness result in a product that could easily compete with the (excellent) $42 version at Tom Colicchio's Craft. And as for the shrimp and grits — this is the version to compare all other versions to. The crustaceans pack that gentle maritime tang that let you know they come from good waters; the grits are bursting with robust corn flavor; and the country ham, shellfish jus, and Brooklyn lager sauce combine to produce such a funky, salted, umami-packed punch I was convinced the chefs slipped some fermented XO sauce in there (they did not). Stunning.

Finish off with banana cream pie or mint chocolate cake, with brilliant grassy notes. The South might just come closer to building better representation in New York if McInnis, Booth, Baca and others continue to evolve and refine their Dixie fare as deliciously as they are now.

Our review of Root & Bone

Cost
$50 - $60 per person if you play your cards right.
Sample dishes
Fried chicken, biscuits, pork chop, shrimp and grits, "meatloaf."
What to drink
Maura McGuigan, late of Booker & Dax, is helping to overhaul the beverage program. In the meantime, ask for a Blanton's whiskey sour or mint julep (there's a wide and affordable bourbon and rye selection).
Bonus tip
Walk-in and wait. Root and Bone's succotash is the real deal, folks.