Bleecker St.'s Old Tbilisi Has the Silk Road on Lockdown

Share All sharing options for: Bleecker St.'s Old Tbilisi Has the Silk Road on Lockdown

There isn't a richer starter at any restaurant in New York than adjaruli khachapuri ($16), a freshly baked bread shaped like a world champion wrestler's belt, with straps on each side. In the middle is a chasm seething with melted sulguni, a stark-white and slightly sour cow's milk cheese. On top of that a raw egg is cracked just before the bread hits the table. Your job, if you can suppress your awe for a minute, is to immediately seize a fork before the bread cools and twirl the cheese so that the egg mixes in. Can succeeding dishes compare with this gluttonous and glutenous treat?

New on Bleecker Street, Old Tbilisi has an unusual backstory. Until recently the restaurant was located on Kings Highway in Brooklyn's Gravesend, one of only three places in that borough serving food from Georgia — not the Peach State, but the former Soviet republic. Originating in the Caucasus Mountains at the crossroads of Europe and Asia, the cuisine is a mixture of grilled kebabs, eggplant salads, fortifying soups, steamed dumplings, and casseroles of chicken and veal baked in clay pots. Many dishes incorporate nuts, pomegranates, and large wads of fresh herbs like cilantro and tarragon. One day last year the Brooklyn restaurant shuttered, changed its name from Tbilisi (the Georgia capital) to Old Tbilisi, and set down in Greenwich Village in a region of student honkytonks and small Indian restaurants.

The space used to be an eatery devoted entirely to mussels, and after that, one that specialized in sliders. Now the premises are more sumptuously decorated, with a crescent-shaped bar in front open to the sidewalk, and an elongated, dumbbell-shaped dining room. In back, a rocky garden with a cliff and waterfall presents a lovely spectacle. The walls are hung with contemporary Georgian work, including Calder-like smeary village scenes and giant gray canvases showing tortured Roman subjects. All are for sale, with price tags that hover around $2000. Don't even think about it, your apartment isn't big enough. 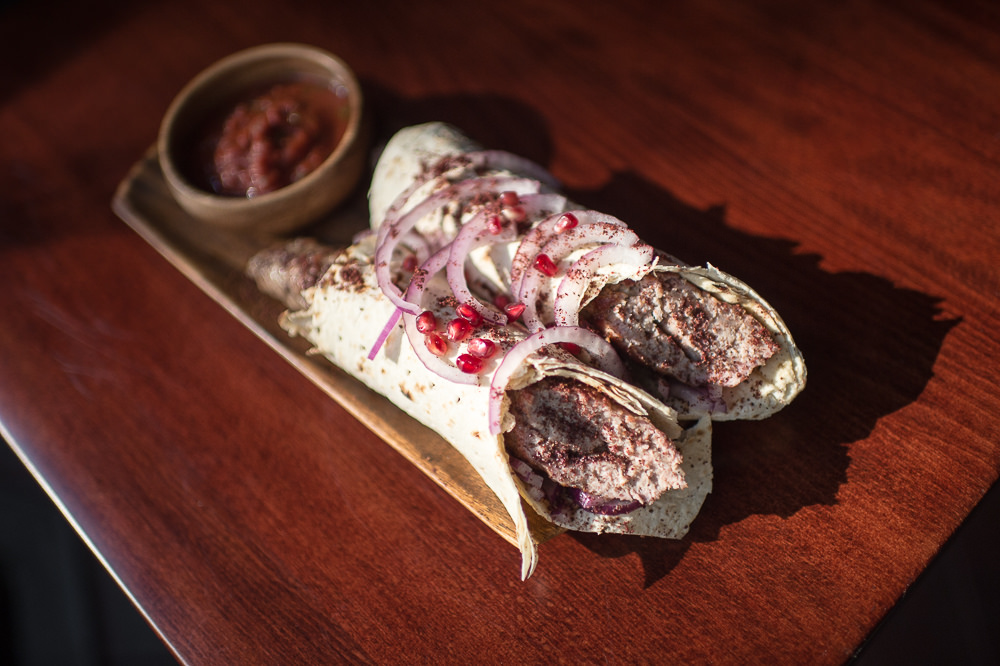 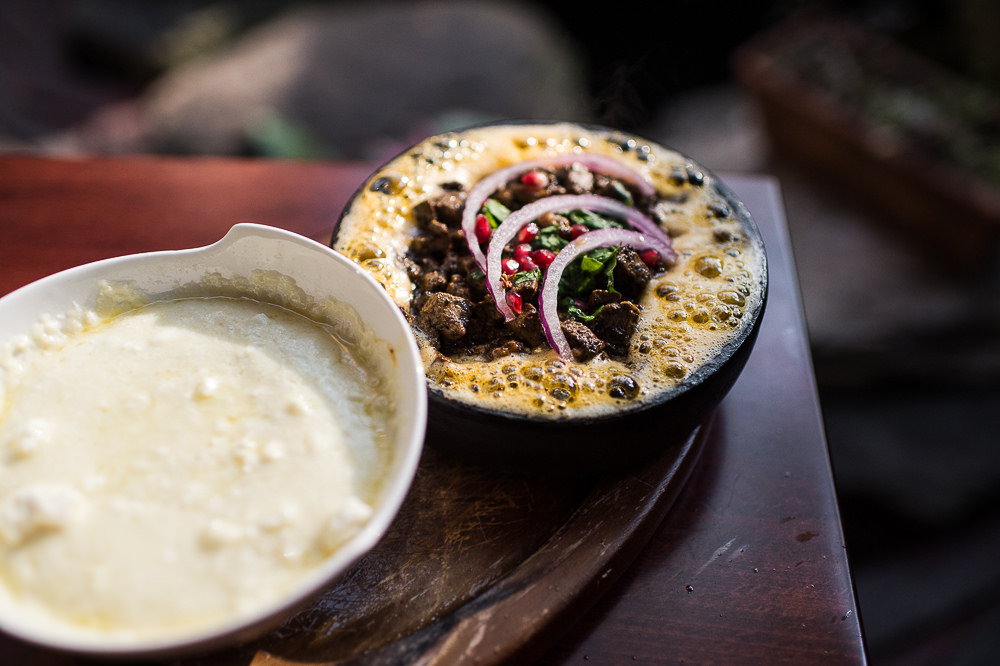 Do any other dishes match khatchapuri's cheesy egg-bread elegance? Well, sliced into a pair of heavy lead pipes, the ground-lamb-and-onion lula kebab is equally dope. Cooked over charcoal, the thing is smoky and sheepy and comes wrapped in a thin lavash bread that might be mistaken for a flour tortilla. At $25, it's an entrée that could easily feed two. (The also-great pork version is $3 less.) Another "don't miss" entrée, especially if you're a fan of organ meats, is megruli kuchmachi ($25), discouragingly described as "slow cooked veal entrails." It turns out to be finely minced liver, kidney, and heart in a bubbling casserole prettily scattered with pomegranate seeds. Strangely, it comes with a big bowl of hominy grits, establishing an unlikely connection between our Georgia and the other Georgia.

Old Tbilisi seems generally aimed at Russian expats, for whom Georgian food was typically incorporated into menus found anywhere in the U.S.S.R. The restaurant's bill of fare includes several Russian dishes, too, including caviar-stuffed cucumber rolls, sturgeon done several ways, and your typical post-Soviet pickle platter, but skip these in favor of "pxali trio" ($18). This tongue twister designates three scoops of salads — really, more like bread dips — dressed with walnut paste. Old Tblisi's trio deploys eggplants, green beans, and spinach, respectively, each propelled by a different mixture of fresh herbs. For something more familiar, but no less delicious, check out ajapsandali ($14), a close cousin of Sicilian caponata in a serving so generous it threatens to cascade off the elongated rectangular plate. 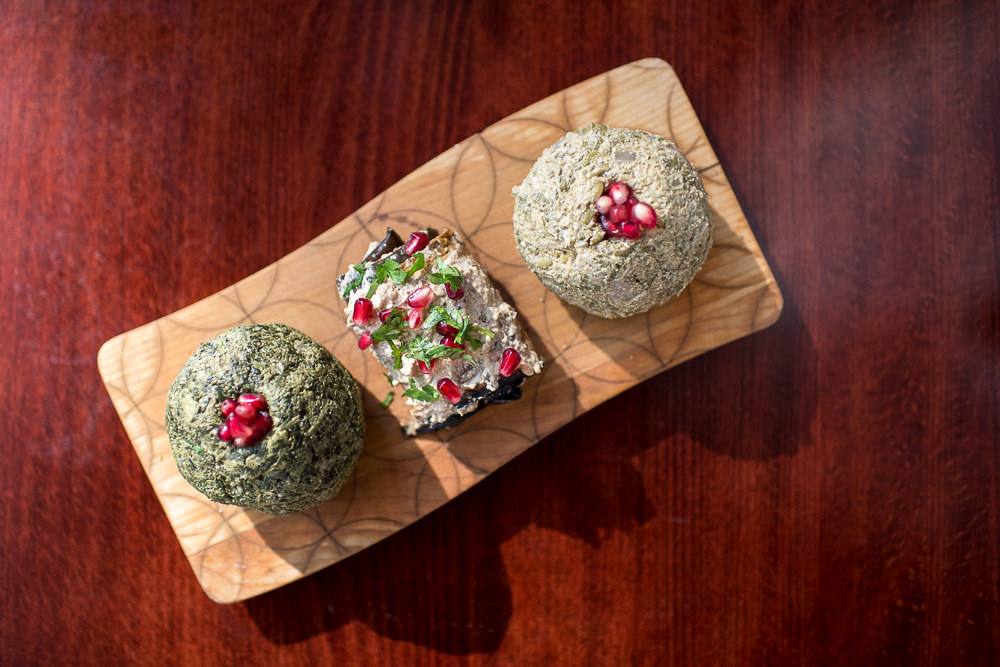 There are disappointments, too. Nadughi is three scoops of gritty, mint-laced pot cheese, pretty to look at but boring to eat. And the first two salads in the appetizers section of the menu are paltry things composed of tomato, cucumber, and raw onion, no matter how interesting the dressings sound. Charcoal-grilled kebabs (called mtsvadis) are available at Old Tbilisi in chicken, pork, and lamb, served with pickles and fried potatoes. Unfortunately, these are less delicate and not as tasty as the ones you find in Uzbeki restaurants. With the exception of the lulas mentioned above, skip the kebabs.

But do grab the Silk Road dumplings called khinkali (three for $10), especially the ones stuffed with lamb and onions. Note that these are shaped like Shanghai soup dumplings, showing the fascinating concurrence of dumpling shapes along the Silk Road. 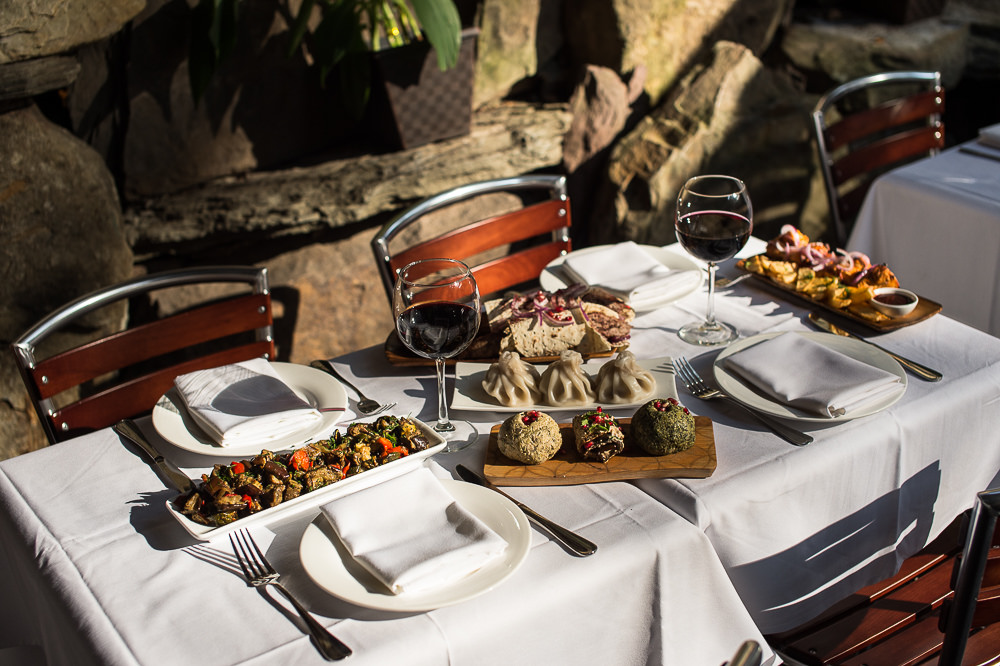 As good as much of the food at Old Tbilisi is, the real utility of the place may be in exposing New Yorkers to some exceptional wines on the all-Georgian list. If you've had too-sweet plonk from this country before, take another look. Teliani Valley's Saperavi ($38) is an intriguing red single-grape varietal on the light side, while Marani's Saperavi Cabernet ($38) is a blend of the same grape with Cabernet Sauvignon, delivering a more saturated punch. The best white tasted was Teliani Valley's Tsolikouri ($38), which flung floral notes with just a hint of sweetness. It, too, represents a single-grape varietal. And since the country is original home to 500 of the 4000 grapes found in the world, we've clearly got a lot more tasting to do.

Our review of Old Tbilisi

Cost
Full meal for two, including shared app, two entrées, and bottle of wine, including tax and automatic tip, $125.
Sample dishes
Adjaruli khachapuri (cheese and egg bread), ajapsandali (Georgian caponata), yogurt soup, lamb lula kebab (ground meat wrapped in flatbread), shqmeruli (baby chicken in a pot), mergruli kuchmachi (diced organ meats with grits)
What to drink
Georgian wine ($32 to $85 per bottle, glasses $9 to $15), Georgian fruit sodas ($5 each), shareable pots of tea ($7).
Bonus tip
To score a table in the small but ultra-desirable garden in back, reserve for 6 p.m. or earlier and arrive promptly, tables are assigned first-come, first-served. Warning: The bottom line of your tab will have an 18 percent tip already included with no other notice, either by the waiter or on the menu. To make matters worse, below the bottom line is a tipping guide that, if you haven't examined the check carefully, may trick you into leaving a double tip. Diner beware!