Azasu, the Gateway Drug to Japanese Cuisine in LES

Share All sharing options for: Azasu, the Gateway Drug to Japanese Cuisine in LES

Every single employee at Azasu, Yopparai's newly hatched little brother on Clinton Street on the Lower East Side, is American. In contrast, every single employee at the four-year-old Yopparai, a lauded upscale izakaya also on the Lower East Side, is Japanese. The two restaurants, united by owners Gaku and Christy Shibata's affinity for sake and authentic Japanese cuisine, fall on opposite ends of the izakaya spectrum. (To learn more about izakayas and other types of Japanese cuisine, read this.)

To put it in the simplest of terms, Azasu could be considered the gateway drug for Americans to delve into the diverse, often maniacal, and spellbinding world of Japanese food and drink. Since May, the informal Japanese sake bar has been plating up an approachable list of izakaya staples, alongside Manhattan's largest selection of cup sake, lip-puckering yuzu margaritas, and Hoppy, an inexpensive, nearly non-alcoholic beer-flavored beverage popular in Japan. Azasu is the first official restaurant in the country to carry the brew. 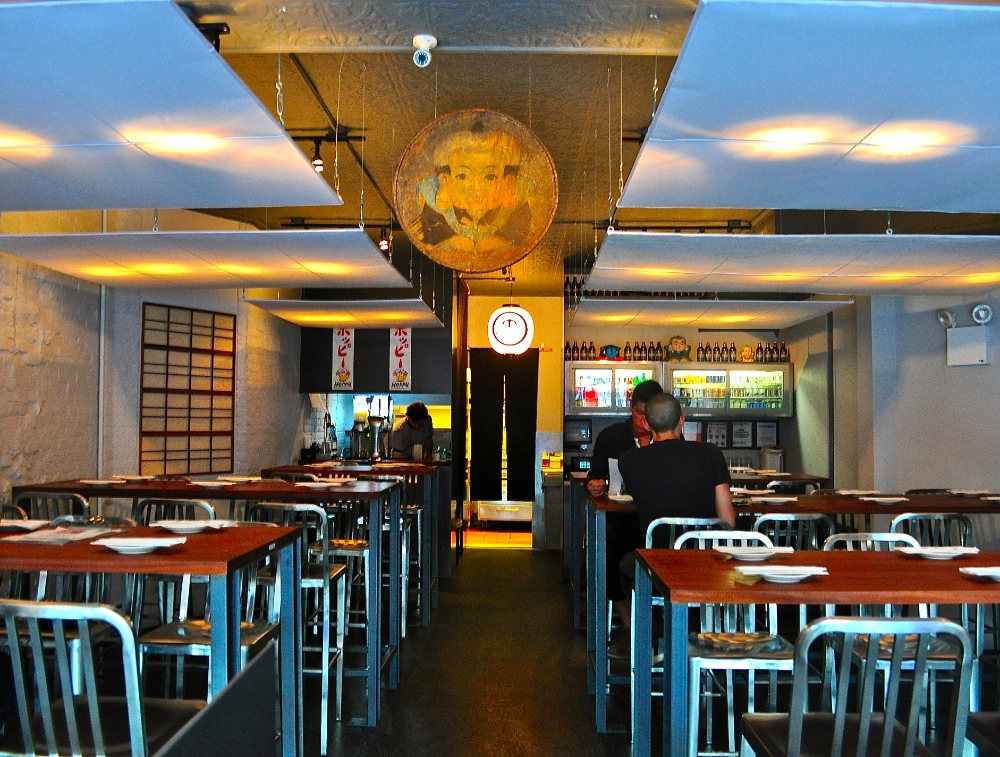 With one refined small plate Japanese sake bar under his belt, Gaku explains that he wanted to provide New Yorkers with a second Japanese bar experience set in a more casual environment. In the case of Azasu, that translates to a lower price point ($4-$12) and a simplified menu of alcohol-friendly food. American-born chef Danielle Sobel, who spent time at Morimoto and the lauded Sushi Azabu, trained for a year at Yopparai before becoming head chef at Azasu. Much of her menu, which she developed in conjunction with Gaku, plays on fried Japanese bar food because, hey, Azasu is a drinking place first and foremost. 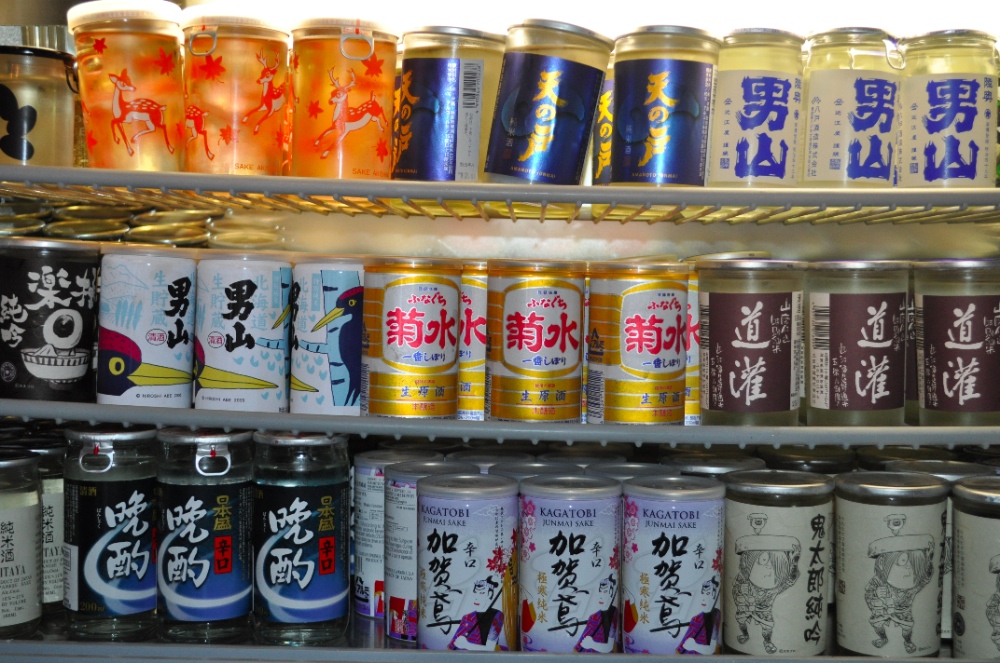 While one will find cup sake — which is literally sake sealed in a small glass cup or metal tin with a removable metal top and plastic cover — at other Japanese places in New York like SakaMai, Azasu stocks the largest collection in the city, right now counting 21 cups. And, in the next few months, Gaku will add three more to his collection, branded under the Azasu name in collaboration with Nanbu Bijin, a sake brewery in the Iwate Prefecture.

One would think, with their playful cup designs sometimes depicting animals or cartoons, that cup sake would be a beverage popular with Japan's younger generations. But in fact, Japanese 20-somethings choose grape wine over rice wine, with cup sake favored by the middle aged. Sold via vending machines and at places like train stations and convenience stores, cup sake targets people on the go looking to grab a quick portable drink. 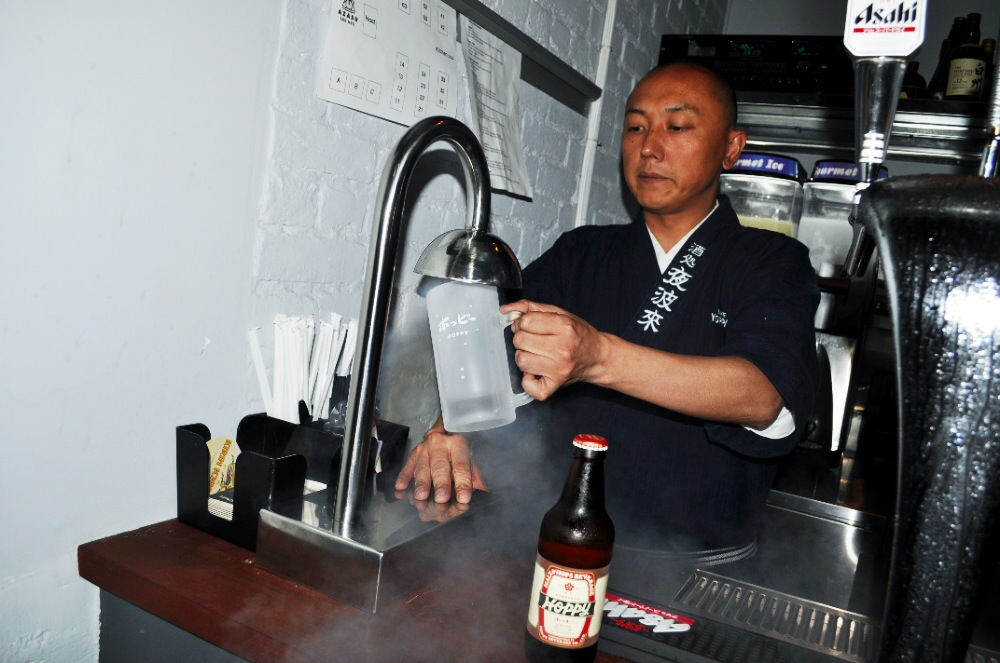 The very first sake to be sold in a cup was produced fifty years ago by Ozeki brewery under the "One Cup" brand. This exact sake is on offer at Azasu for $7 (180ml) and Gaku explains that he stocks this option because it was the first cup sake he tried as a teenager: "I just have a really nostalgic feeling about One Cup Ozeki. It was the first cup sake, and it's actually the first booze I ever bought. When I was a teenager I snuck out of my parents house and bought one in a vending machine."

And while it's a junmai, meaning that usually the rice which goes into the sake brewing is polished to 70 percent or less (70 percent of the grain remains and 30 percent is polished away), it's a clean and dry sake that Gaku says pairs well with everything, from his sukiyaki beef topped with a raw egg yolk to the pork gyoza.

Contrary to popular belief, just because sake is sold by cup as opposed to bottle, the packaging and portability of the drink don't reflect inferior quality. Cup sake ranges from honjozo/junmai to premium levels inclusive of junmai daiginjo. Most of Azasu's cup sakes are on the premium level, the priciest of which is the Nikko Homare at $19. 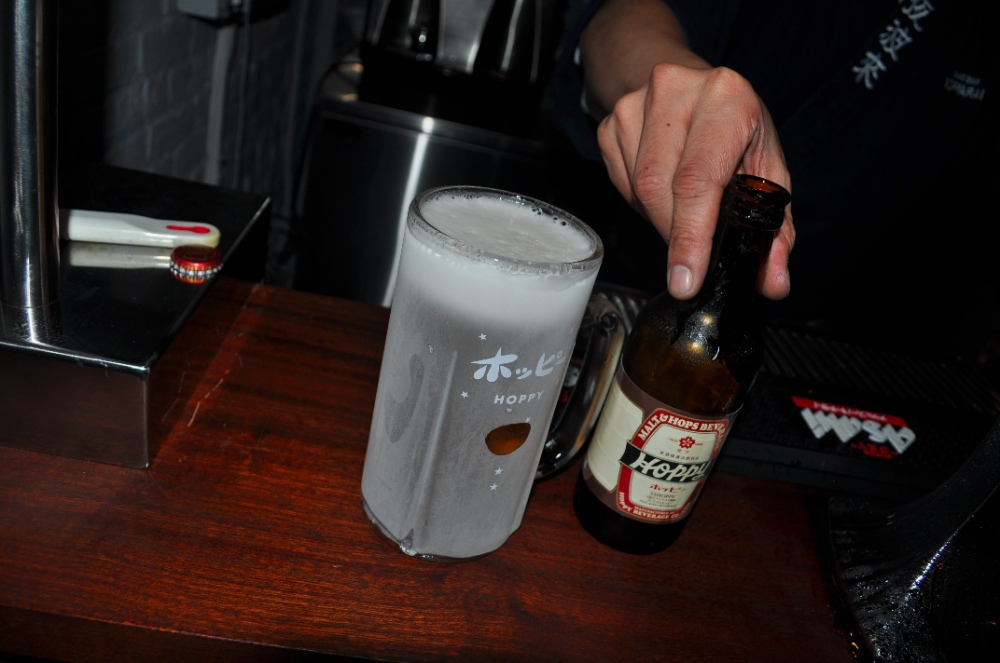 It's improbable that you've experienced Hoppy. And that's because Azasu is the first bar in the country to import the nearly alcohol-free (one bottle contains 0.8-percent alcohol, about double what's found in some kombuchas) brew directly from Hoppy Beverage Co., Ltd., formerly known as Kokuka Beverage Company. Hoppy tastes and looks just like beer (comes in three styles: Hoppy, Hoppy Premium, and Hoppy Black), and is mostly sold in Tokyo. It's been around for over half a century, and back in the day it was considered a cheap alternative for those who could not afford beer. Shochu was added to increase the alcohol content. But recently Hoppy has experienced a revival, and its manufacturers are looking to target a younger audience with the help of rebranded bottles. Azasu has teamed up with Hoppy Beverage Co. to promote the brew stateside and educate New Yorkers on it.

Unlike sake bombs, Hoppy isn't just a bottle plus a shot of shochu. Azasu's process to assemble a proper frosty mug is as follows: Freeze a Hoppy-branded beer mug using the restaurant's Magic Frosty machine, which was imported from Spain. Then add one to two shots of frozen shochu to the mug. Quickly pour in one bottle of Hoppy without stirring to create a foamy, frothy head. Note: it's not hard to get drunk off this stuff. 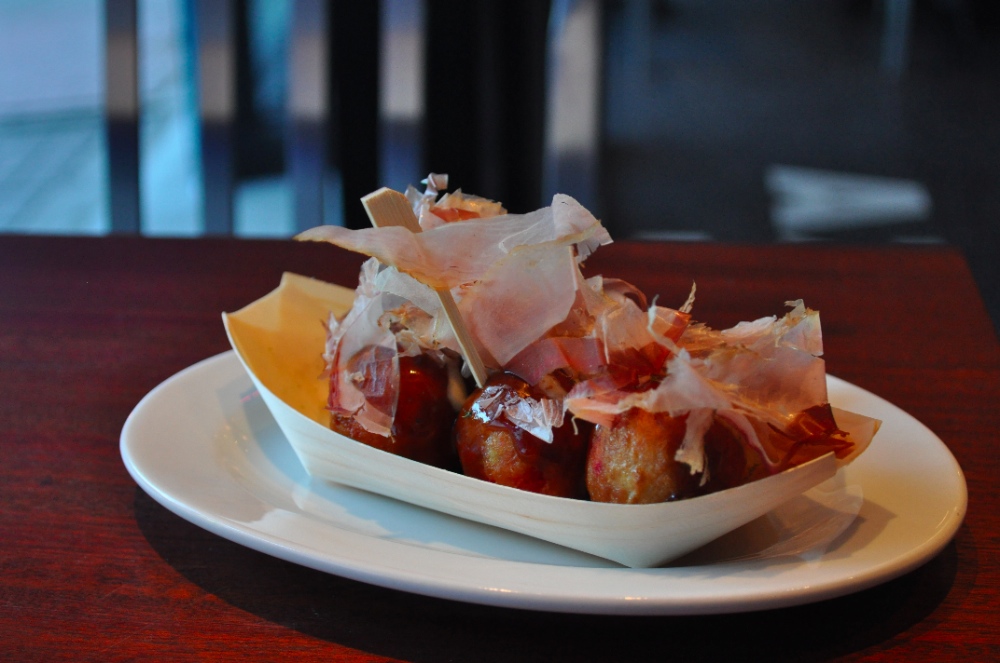 But one of the most addictive beverages at Azasu isn't its sake, Japanese whiskey, or chuhai (shochu-based cocktails). It's the frozen lemon-yellow slush waiting to be discharged from a cooling unit behind the bar. There's plain frozen shochu and frozen yuzu, the tart Japanese citrus fruit which looks like a small grapefruit and tastes like a cross between a lemon, an orange and a grapefruit. The yuzu slush is virgin, by Azasu boozes it up with one or two shots of shochu. Gaku likens the drink to a yuzu margarita, and it's one of those sour-sweet drinks that totally hides any trace of alcohol and could get you tipsy in no time. 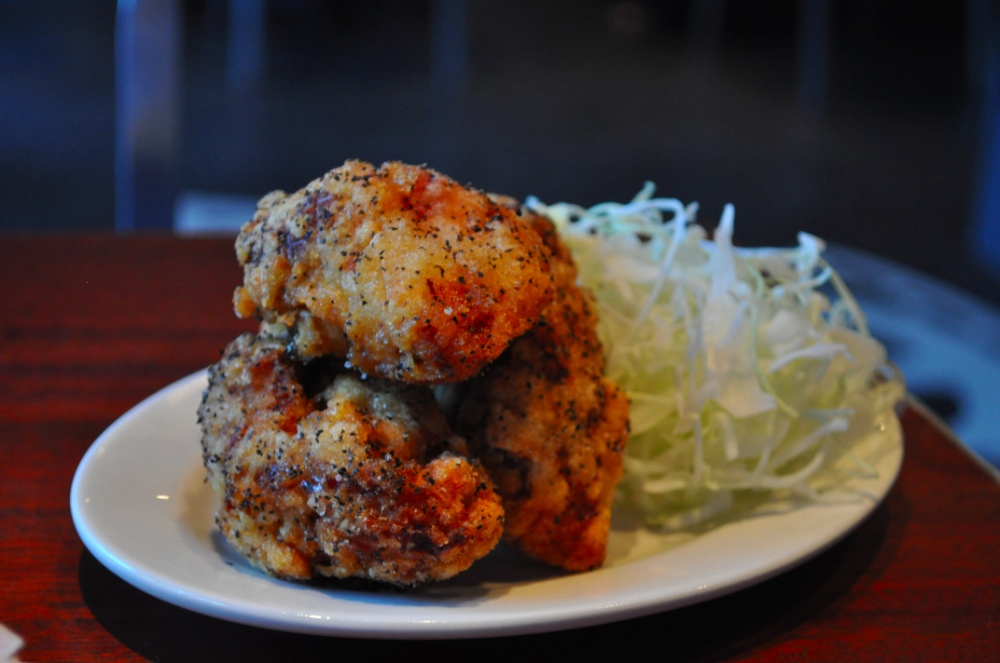 The flavors found in Japanese cuisine are often times either subtle and delicate or aggressively powerful. Azasu's menu falls in the latter category, serving flavors happily accentuated by booze. And while the food is less complicated, and subsequently less pricey, than that of Yopparai, the menu is approached with the same level of care and attention to ingredients. There's no uni, ankimo, or blue fin sashimi, instead a roster of more familiar Japanese pub plates like chewy takoyaki (octopus balls) cloaked in a rich takoyaki sauce and large generous shavings of a premium bonito from the Ehime Prefecture in Japan; a stellar slab of ham coated in panko and deep fried, then layered between crustless slices of spongy white bread along with sliced cabbage and tonkatsu sauce (like a Japanese barbecue sauce); and the crisp yet juicy dark meat chicken karaage, marinated in ginger and sake before hitting the fryer. If you're a fried chicken enthusiast, this is one version not to miss, especially alongside, say, a glass of Kikusui Funaguchi sake. There's also chicken teriyaki, the ubiquitous Japanese-American favorite, and a Japanese play on poutine minus the cheese curds: Niku Jyaga beef and onions cooked together and then served over fries. 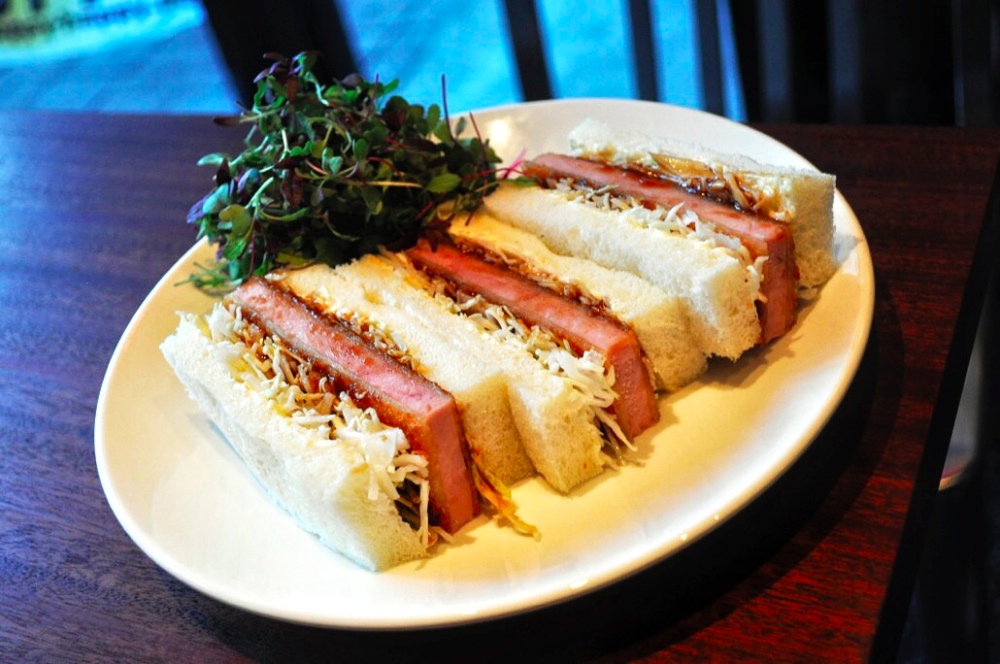 While the menu may read slightly like it panders to the American palate, rest assured that the Yopparai brand is behind this place, which brings a level of authenticity and credibility to eats and drinks. With so many new craft cocktail bars hitting the city on an almost daily basis, Azasu is a welcome respite that provides Lower East Siders with an unusual glimpse of Japanese drinking culture.
· All Eating Japanese Coverage [~ENY~]