Share All sharing options for: Don't You Dare Eat Dinner at Maison Ladurée

All throughout Shitshow Week 2014, the Eater editors will file impressions of restaurants around the city. The goal of these reviews is to determine whether or not these establishments are, in fact, shitshows. Up first: Robert Sietsema with a review of Maison Ladurée:

Maison Ladurée was founded in 1862 by Louis-Ernest Ladurée — a miller, writer, and painter – on Rue Royale near the Place de la Concorde. There, his patissier Pierre Desfontaines is said to have invented the macaron — a fancy forerunner of the sandwich cookie featuring two almond-laced meringue wafers with a sharply flavored filling. Even today, the shop started by Ladurée and its subsidiary branches are said to be among the best pastry shops and tea rooms in Paris. In this sort of establishment, in addition to baked goods one can also expect hot beverages along with such light luncheon fare as omelets, salads, and sandwiches.

How was it, then, that when the chain established its second New York branch in February, it decided to add an ambitious restaurant, and in doing so totally fumbled the ball? 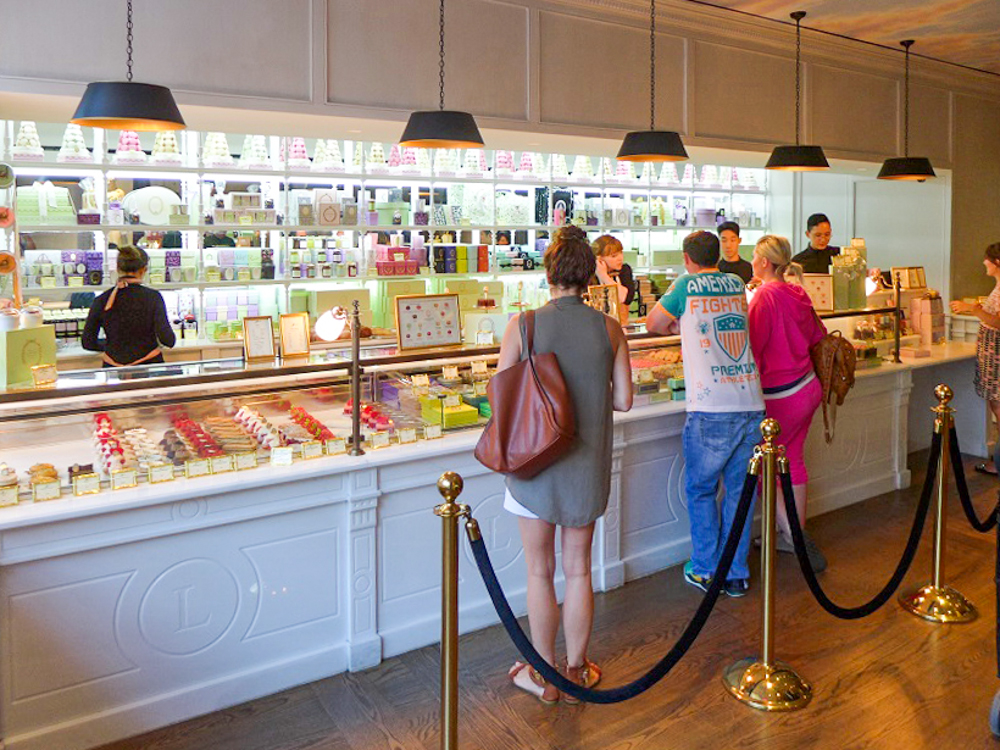 The unspeakably ornate space runs like a railroad tenement from prime footage on West Broadway all the way to Thompson Street, where a walled garden is one of the prettiest outdoor dining spots in the city. The storefront itself is a Parisian-style pastry shop, in which one counter is devoted exclusively to macarons, stacked in neat piles in outlandish, eye-socking colors.

There are two dining rooms filled with heavy furniture, one decorated with autographs of unrecognizable French people and chairs with fringe, the other with mirrors and dizzying stripes. The rooms seem like period galleries in the Metropolitan Museum; sitting in either feels like attending your own funeral. Instead, you should perch on the patio, weather permitting. Once installed in metal chairs at your metal table, be handed a glossy 14-page menu, in English but with French translations.

My guest and I sat on a warm summer afternoon contemplating lunch. You can have quite a good one if you order simply and carefully. The foie gras torchon ($23), with orange peach preserves streaked down the middle, is highly recommended, the duck organ melting on the tongue like butter and the jam conferring just the right jolt of sweetness. The menu mentions a macaron, and indeed several publications – where writers are adept at reading menus and then concocting fanciful descriptions without having seen the dish – have cited that cookie as a corporeal presence. The fact is, the slice of torchon itself is intended to resemble a macaron. There is no actual macaron.

So, too, is the simple omelet — a real French classic — worth eating. Gently cooked in clarified butter, it is the soul of simplicity. Alongside comes a pile of "Laduree Pommes Pont Neuf" ($7) stacked to resemble a bridge. This bridge, however, is in danger of collapse: its square beams are made of under-seasoned mashed potatoes browned to total limpness. And what are these fries served with? Not handmade mayo or mustard, but bottled commercial ketchup.

The menu says the egg and fries cost $14, but when our bill arrived it had separate charges for the omelet ($10) and the potatoes ($7), so that we ended up paying an extra $3. A small point, because who's counting pennies in a place like this?
The zucchini tartare ($15) is almost acceptable luncheon fare, a fez-shaped mound of diced raw zucchini surmounted by fanciful curls of the same vegetable, oddly flavored with clumps of mint powder. But halfway through, eating the dish turns into a chore.

I won't bore you with descriptions of the dishes that followed on this visit. Suffice to say, some of the food descended into parody. What would possess a well-regarded Parisian bakery to drag itself in the gutter by offering sliders? They come in fours, comically referred to as "Mini Burger [sic] de Boeuf" ($20), causing my companion to nearly split her sides. Though ordered medium rare, they arrived well done on tiny brioche buns lined with a damp mass of chopped lettuce and strong mustard that made my nostrils flare — with disappointment.

Our lunch ended with a wonderful pastry shaped like a strawberry, filled with berry gelatin and berry mousse, and a handful of macarons, said to be shipped daily from Paris. All in all, apart from some service issues, this meal was deemed almost satisfactory in several regards. The most serious problem: when a glass of water was spilled at our table, the waitress barely glanced up from her napkin folding a few feet away and bellowed, "Can I help you with that?" Then continued folding.

The worst food in the place is found among the dinner entrees. The menu sometimes reads well — boasting North African, Italian, and even Indian flourishes — but when the food arrives, it's bland and boring. Such was the case with "wild sea bass carpaccio, Pondicherry pepper, coconut, mesclun salad and French beans" ($33). The raw fish was lumpily sliced and covered with a creamy white substance. "This tastes like lemon hand soap," my guest exclaimed. And indeed it did. Vegetables were piled atop the fish in a sopping mass, further rendering the dish inedible. And where was the tingle of Pondicherry pepper? The cook had apparently left it back in India.

Equally bad were the "free range lamb cutlets served with roasted eggplants and artichokes, baby kale, turmeric and lime" ($32): three chops (not cutlets) cooked way beyond the requested medium rare, reheated, then thrown down upon a similar damp mass of vegetation. An entrée of salmon also remained uneaten, the skin gelatinous rather than crisp. 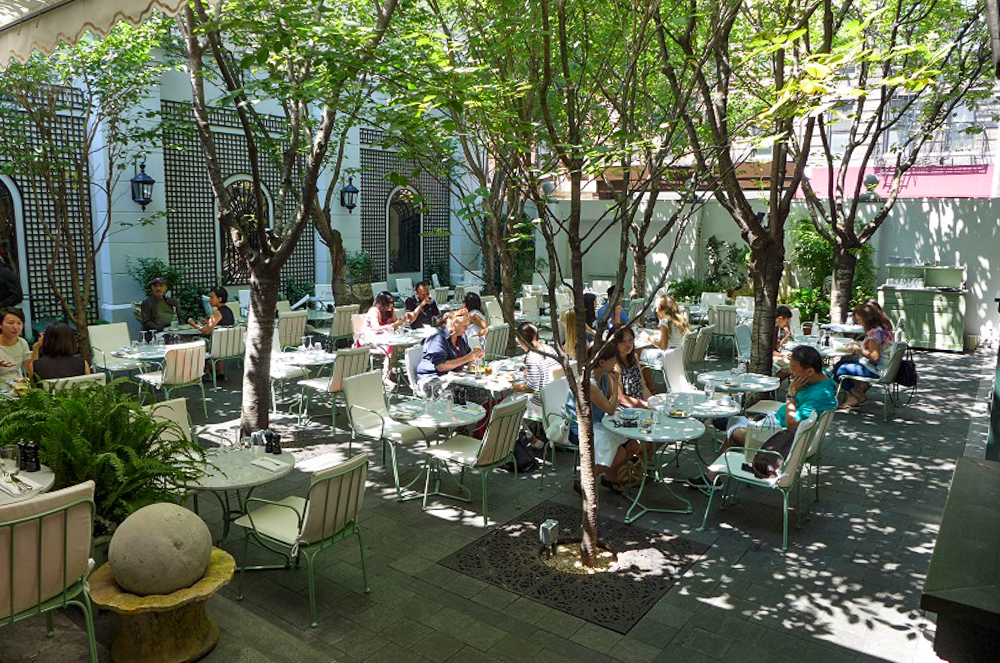 Does Maison Laduree descend to the level of shitshow? Well, where pastries and simple luncheon fare are concerned, certainly not. But the dinner menu and ham-fisted service at all times certainly qualify it as such. By all means go, sit in the garden, and enjoy pastries and coffee. But don't you dare eat dinner there.
Verdict: Not a Shitshow.