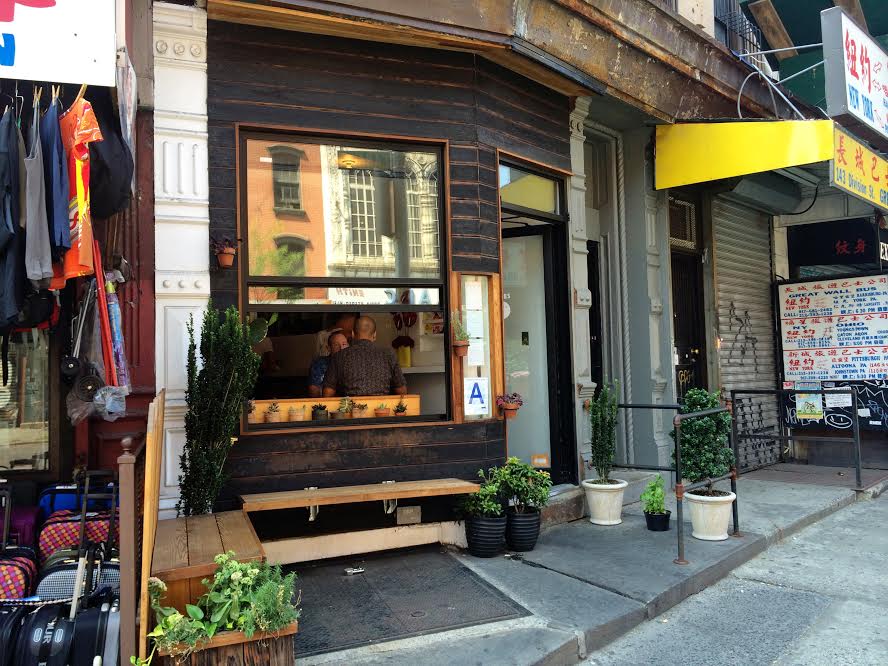 The recipe for Dimes — an almost year-old wellness-focused, organic, seasonal cafe on the edge of Chinatown and the Lower East Side — can easily be traced to the sunny bohemian streets of Venice, California. And to understand Dimes' quick ascent to success, simply take a bite of the burrata and tomato salad. Here, the classic dish is reworked with Maplebrook Farm burrata, heirloom tomatoes and cherries from vendors like Migliorelli Farm and Locust Grove Farm (depending on availability) at the Union Square Greenmarket, dressed with a chili balsamic vinegar then dusted with nigella seeds. The flavors and the ingredients are mostly familiar, but twisted just enough to sound intriguing, as is much of the Dimes menu. And those nigella seeds? They impart a smokey onion flavor but also aid in digestion and contain antimicrobial properties.

That's how it goes at Dimes. From the lavender, blueberry, banana acai bowl with house-made cashew cream, house-made almond milk topped with goji granola to the veggie and cabbage barley bowl dressed up with kale-hazelnut pesto. Often times, health-oriented restaurants pushing vegetable and grain-forward fare sacrifice flavor for nutrition. But Dimes doesn't fall into that trap. Rather, dishes of brilliantly colorful, artfully arranged wholesome food taste just as delicious as they look (and Robert Sietsema agrees). 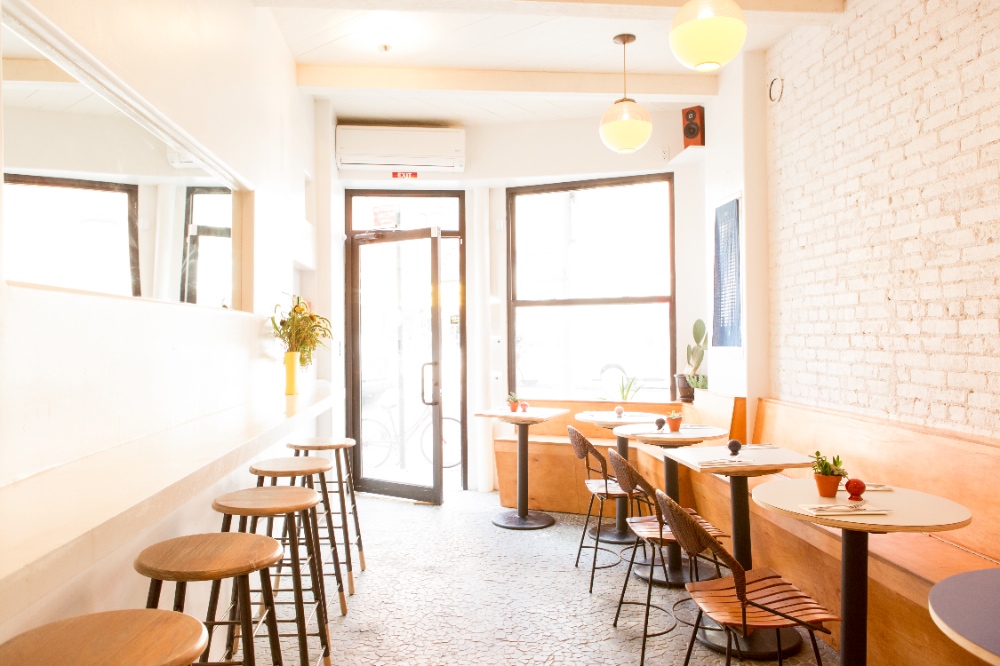 Co-owners and friends Sabrina De Sousa and Alissa Wagner didn't set out to open the coolest cafe in Chinatown. "We just wanted to have a place where we could hang out with our friends. Honestly. That was it," explains De Sousa. Inspired by places like hippy-chic Cafe Gratitude, which has locations in the Bay Area and Los Angeles, and boho Cali-Asian staple Axe on Abbot Kinney in Venice, California, Dimes presents New Yorkers with a cheery taste of fresh, healthy food in a compact white-washed nook that feels aesthetically inspired by the Mediterranean, Japan, Mexico, and California. The look here isn't decidedly one style. Rather, Dimes channels its own minimalist, relaxed feel with round surfaces and pops of color thanks to tropical floral arrangements and a wall of splashy pottery designed by friend Cassie Griffin. The ceramics are for sale, as are Palo Santo incense sticks and a small section of apothecary items, which De Sousa hopes to expand in the future. 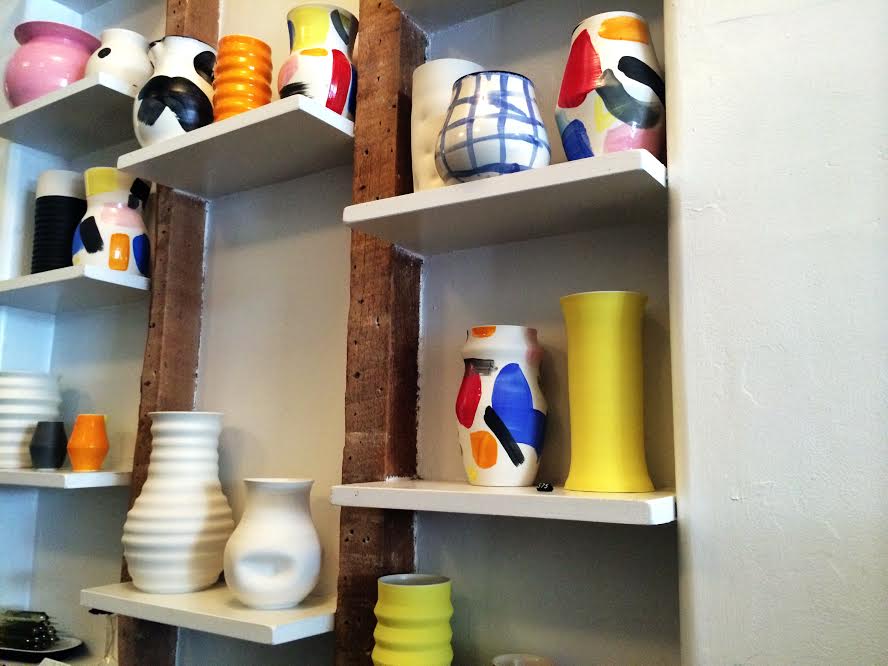 When Dimes first propped open its door last September, the micro 20-seat, 450-square foot cafe debuted with a counter order service model à la revered Israeli vegetable chef Yotam Ottolenghi, whose seasonal restaurants in the UK follow a serve-yourself counter format. Initially, De Sousa/Wagner's vision for Dimes was to operate as a similar lunch spot, with Café Integral coffee and house-made juice (in flavors like cantaloupe-pineapple-carrot-apple-lime), plus a limited menu of grain-based bowls, acai bowls, and salads. But one week in they nixed the counter service plan in favor of the more traditional sit-down dining model. And, almost immediately, they realized the neighborhood wanted more. After just about a month of business, sandwiches like pulled chicken with harissa mustard, arugula, and apple radish slaw; and veggies with black sesame, hard boiled eggs, avocado, pickled carrots, red onion and greens hit the menu. Four months in, dinner became an option. Because De Sousa and Wagner believe in local and seasonal produce, their SoCal-spirited menu — which, like the aesthetic, bears obvious ties to Japan, South America, and the Mediterranean — changes weekly. Right now heartier dinner dishes include Atlantic cod in a coconut curry with mustard greens and bok choy over farro; and braised chicken served with preserved lemon-apricot couscous, chermoula-wilted kale and a drizzle of chili oil. "We're still becoming Dimes. Every day we're learning something new ... and we listen to our customers ... we listen to the things they like, the things they request and we change our menu accordingly," explains Wagner. 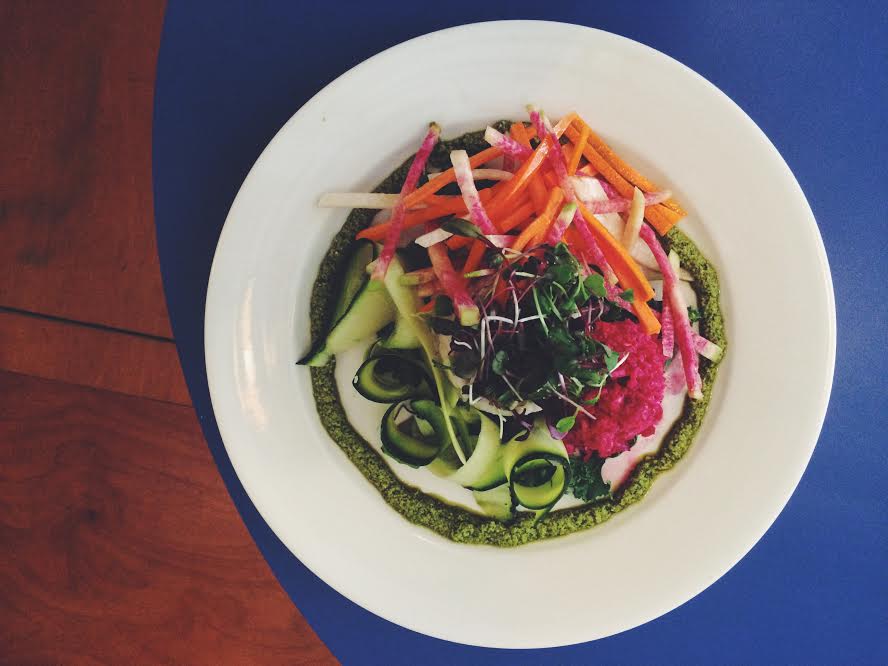 Part hipster, part hippy aren't exactly the expected ingredients to flavor Chinatown. And Dimes' juxtaposition amid hanging Peking ducks and nondescript Chinese businesses only adds to its appeal. "We really just wanted to open up a place that offers something that we wanted to eat every day. Very simple, accessible food, food that you're going to feel really good after eating ... we wanted something you could eat three meals a day ... and feel satisfied ..." the girls explain. 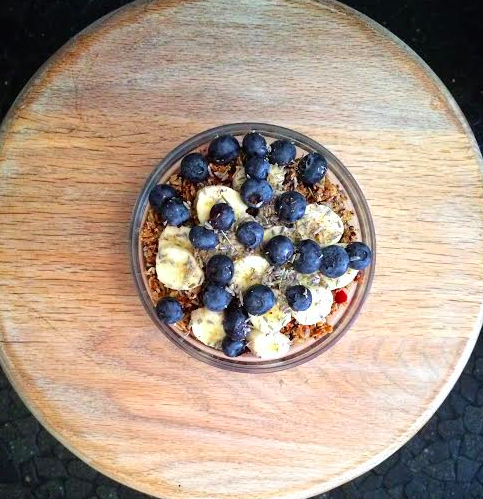 Pick up Dimes' menu at any point in the year and note the abundance of seasonal product. It's evident that the cafe aims to build flavor with vegetables and fruit, though that's not to say it shies away from grass-fed, wild, and sustainably raised meat and fish, which De Sousa and Wagner have learned their male customers want. Surf proteins are sourced from Wild Edibles, while turf proteins come by way of Pat La Frieda. In addition to frequenting the Union Square Greenmarket and hitting up Bodhitree Farm for produce and Battenkill Valley Creamery for dairy, they also procure greens from Satur Farms and even dandelion wine for the Bud Light, a drink that mixes prosecco, honey and lemon. The dandelion wine is produced by Enlightenment Wines, a micro winery in the Hudson Valley known for local fruit (other than grape) wines and botanical meads. De Sousa is a supporter of Enlightenment and explains that owner Raphael Lyon literally picks the dandelion buds himself for the brew. She's also especially keen on the wine because it cleanses the liver and is packed with Vitamin C which is hard to preserve in dried foods.

De Sousa and Wagner, both from Jersey, met while working a decade ago at Lovely Day in Nolita. De Sousa, who has Brazilian roots, got her start slinging pizzas while in high school and eventually went on to clock hours at popular Soho Mexican staple La Esquina and seasonally driven East Village restaurant Northern Spy Food Co., a place which she says had a huge influence on Dimes. 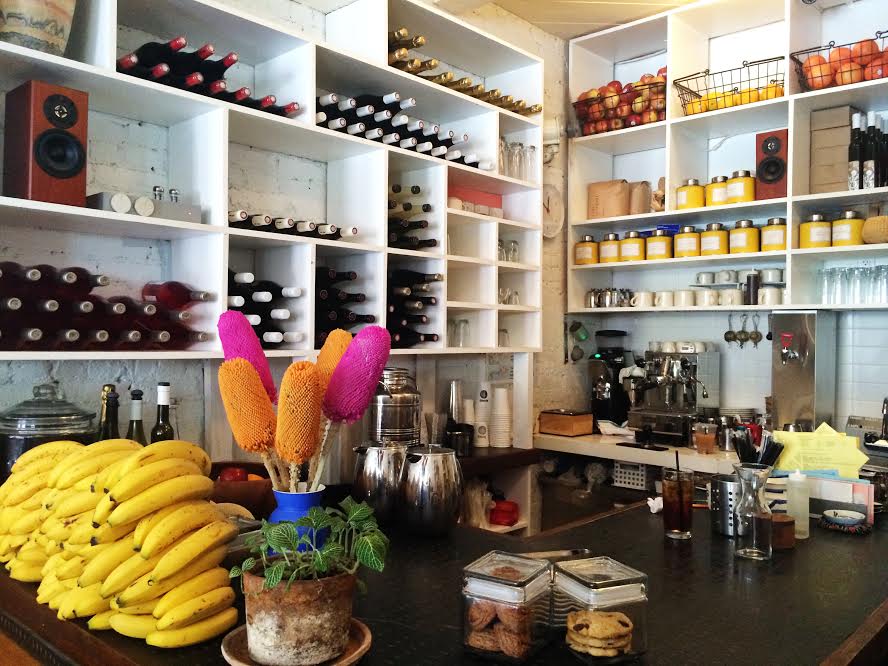 Not entirely dissimilar, Wagner got into food around age 15 making bagels at 5 a.m. Six years ago she attended the Natural Gourmet Institute in Chelsea and from there scored jobs at The Smile in Soho and Five Leaves in Greenpoint. Both De Sousa and Wagner aspired to open a restaurant and felt ready at the same time.

Initially they thought Dimes would work well in Soho. Which is probably true, but the rent was too high, so the girls were forced to look elsewhere. De Sousa used to live on Division Street, and one day about a year and a half ago she looked outside her window to see a 'For Sale' sign in the space that now houses Dimes, previously a dumpling shop slash hair salon. She and Wagner checked out the property and after three moths of demo Dimes threw open its door.

It's surprising that New York — one of the most serious restaurant cities in the world, with an endless supply of chefs devoted to high quality, ingredient-driven cooking — doesn't embrace fresh, clean, and seasonal cooking more. That's not to say that the city doesn't offer such establishments, it's just a conundrum as to why there aren't more places that celebrate wholesome, wellness-oriented cooking. But Dimes does just that, and the cafe's popularity is testament to the fact that New Yorkers are interested in a more healthy, Southern California approach to food.

Aside from plating up excellent, inspired organic and seasonal fare, Dimes functions as a community gathering place, with glowy-skinned artists hanging out the door or reading a book on the front stoop. Clearly, De Sousa and Wagner are on to something. Something that will likely grow in the future. "Why not make our food more approachable and accessible to more people?" Wagner questions. "We should all be eating this way."
· All Coverage of Dimes [~ENY~]
· All The Green Scene Coverage [~ENY~]