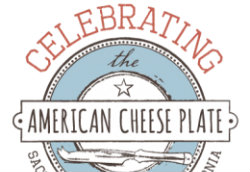 1) The 2014 American Cheese Society Conference:
Following this year's national meeting and judging of cheeses in Sacramento, CA, Greg Blais and Diane Stemple curdn't wheyt to speak with Debra Dickerson, one organizer of the event, to recap the event. On the Festival of Cheese, the end-of-event massive spread of cheeses, open for all to enjoy:

We had two goals, one was that no cheese would be displayed in cubes. No cubes! This cheese was lovingly made, and it takes so long and with so much care to be cut into a cube, it's fast, there's nothing wrong with cubes, there's a place for cubes, but it's not at the Festival of Cheese. And then we had as little waste as possible, we had only cheese that could be recycled and given to pig farmers. 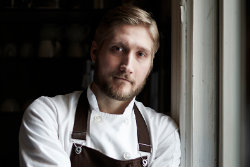 I didn't attend culinary school, I never worked in a professional kitchen. I had the opportunity to learn from somebody very talented, from scratch…I was pushed early, and that was probably the best way that I could have learned. 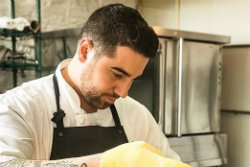 3) Sal Lamboglia of Bar Primi:
NYC Zagat 30 Under 30 member and chef of the new Carmellini joint Bar Primi stopped by The Morning After to talk about his culinary career, from delivering sandwiches in Bensonhurst as an 11-year-old to working for Carmellini for the extent of his culinary career. On not being an angry chef:

I just learned what not to do, and of course, to take what the good people were doing. Over the years, it started to become not worth it to stress over even the big things, because you've still got to put out nice food, service is still rolling, your cooks are still relying on you, and of course as a chef, still relying on the cooks, as a chef, there's just too much action to just get mad about the small things. 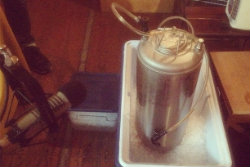 4) Prebatched Cocktail Mayhem at Donna:
Celebrating their reopening post-electrical fire repairs, the owners of the Williamsburg bar Donna stopped by The Speakeasy to talk about their revamped pre-batched cocktail program with host Damon Boelte. On the benefits of kegged, carbonated, pre-batched cocktails:
You're able to actually improve upon a cocktail, because of the consistency of the texture.

For instance, and Aperol Spritz, maybe not the most fascinating cocktail on the planet, but still, it's a great drink, Aperol is more viscous and will float to the bottom of the glass…so the consistency of the drink is not the same from the beginning to the end of the drink. If you carbonate the whole batch, you get these beautiful tiny bubbles throughout. 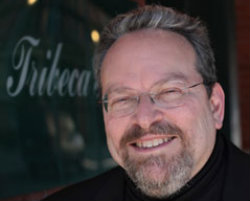 We don't have a lot of industry in New York - we don't manufacture things here. The biggest thing we have to offer is hospitality - it's our stock and trade. The restaurants are front and center in that experience.