So I walk into what's likely the only Michelin-starred restaurant to keep a bust of the Schlitz Blue Bull on permanent display — the namesake malt liquor was once served here — and a shaggy haired bartender starts talking to me about meat.

It's going to be a good night.

He tells me he's running a lamb chop special not as a main course but as an appetizer, which makes me wonder whether he's got any porterhouse steaks or half-chickens to whet the palate as well. He doesn't, though he's selling an open-face roast beef sandwich as a starter too. His pitch sounded like an antidote to our long tasting menu world where you don't get any bread until course fifteen or red meat until course twenty. And so his pitch was well-received. 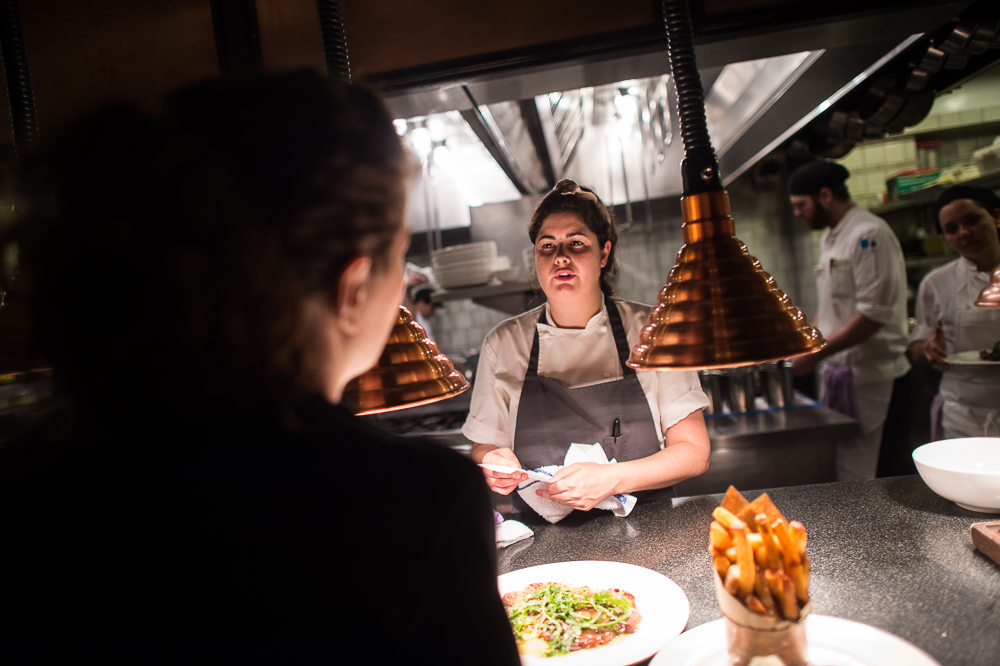 This is all par for course at The Breslin in the Ace Hotel, a half-decade-old gastropub whose porky pyrotechnics make it all the more relevant in our vegetable-heavy era. Such protein-heavy hospitality is precisely what one might expect from April Bloomfield, a bi-costal chef with a track record of casually posing with pig corpses. And neither she nor her business partner, Ken Friedman, are down with modern cuisine's whole time-release gratification thing.

Like sex on a first date, eating a lamb chop as an appetizer is awkward at first, but once the flesh is in front of you it's hard to say no.

Just keep that all in mind before you deign to devour an entire lamb chop as an appetizer, which can feel a bit like sex on a first date; it's awkward at first but once the flesh is in front of you it's hard to say no. And Bloomfield isn't sending out those little lollipop chops you stole off the hors d'oeuvre platter at your uncle's wedding. This lamb is a proper chop, pounded like veal Milanese and painted green with spicy cilantro chutney. Don't expect medium-rare mush in your mouth, this flattened affair is a study in the occasional deliciousness of eating something medium-well. The chop has big-steak heft, big-game flavor, and a world of fragrant heat from the verdant chutney. 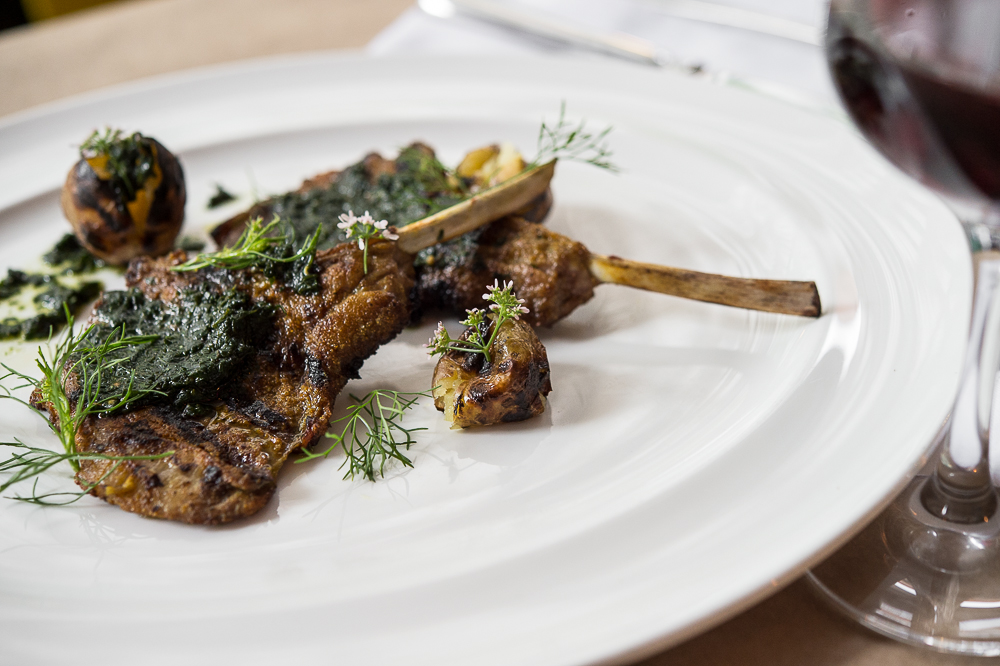 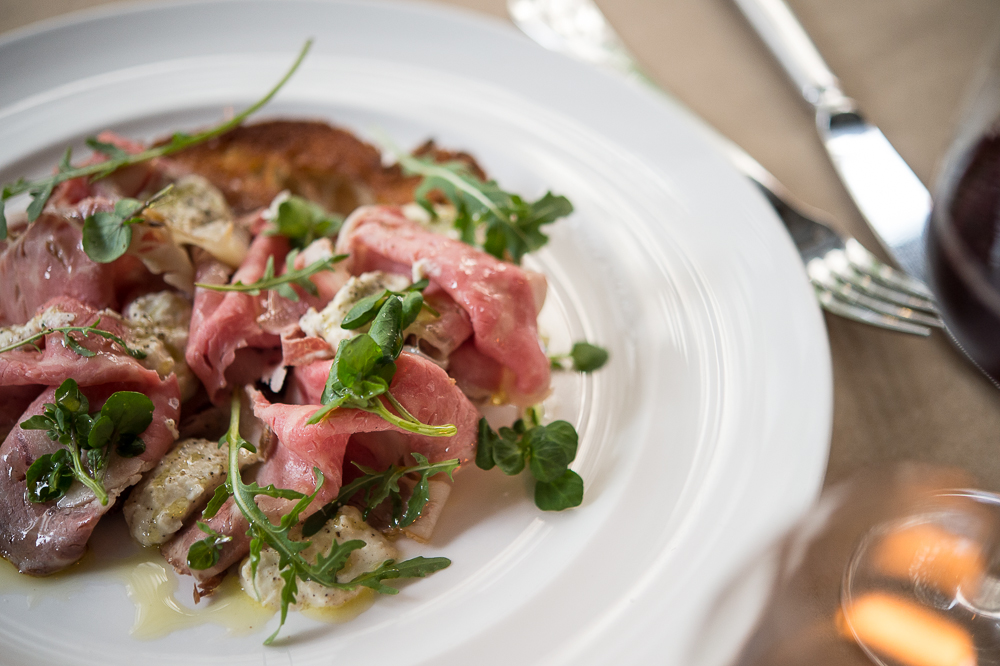 Now that your palate is primed you can move onto that rare roast beef — the original American answer to carpaccio. The kitchen gently warms the crimson slices and drapes them over fat-fried onion bread. The beef tastes of blood, and horseradish cream is your ultra-rich mayo substitute.

Step three: Order the saltimbocca. A sheet of nutty prosciutto covers a layer of sage-infused pork so thin I'm certain Bloomfield could market this nationwide as carnivorous fruit-roll-up. And what a school snack this would be; the savory juices squirt out as you masticate, like MSG-laced chewing tobacco.

None of this food looks new but it all tastes new and that's the genius of Bloomfield and her resident chef, Christina Lecki, who prove that British-accented pub fare, however rustic, can feel just as refined and boundary pushing as the American avant-garde. Sure, there are other great meateries in New York, and if you combined DBGB, Bar Boulud, and restaurant Daniel into a fearsome Lyonnaise Voltron you might have the greatest. But that unlikely scenario notwithstanding, it's worth noting that The Breslin, five years after opening, has grown into the best place to eat meat in The Big Apple, period.

The Breslin, five years after opening, has grown into the best place to eat meat in The Big Apple, period.

The bill of fare reads like a dead dog's breakfast in the high-class canine afterlife. At any given time The Breslin sells up to five terrines, four sausages, two meat pies, two to three types of lamb, pork fat-fried peanuts, pork rinds, pork shoulder, a whole suckling pig dinner that starts at $680 before tax and tip, and a prime rib feast that starts at $760.

My suggestion: do the curried lamb supper, which feeds eight for $640. The entry fee guarantees access to those killer chops, flaky samosas, saag aloo, and a cannonball-sized Kashmiri leg of lamb that you wrap up in buckwheat parathas and eat like a taco. The large-format affair is like a tasting menu served all at once, the culinary equivalent of binge watching "House of Cards." Your ideal pairing: a chilled glass of gamay for $11. 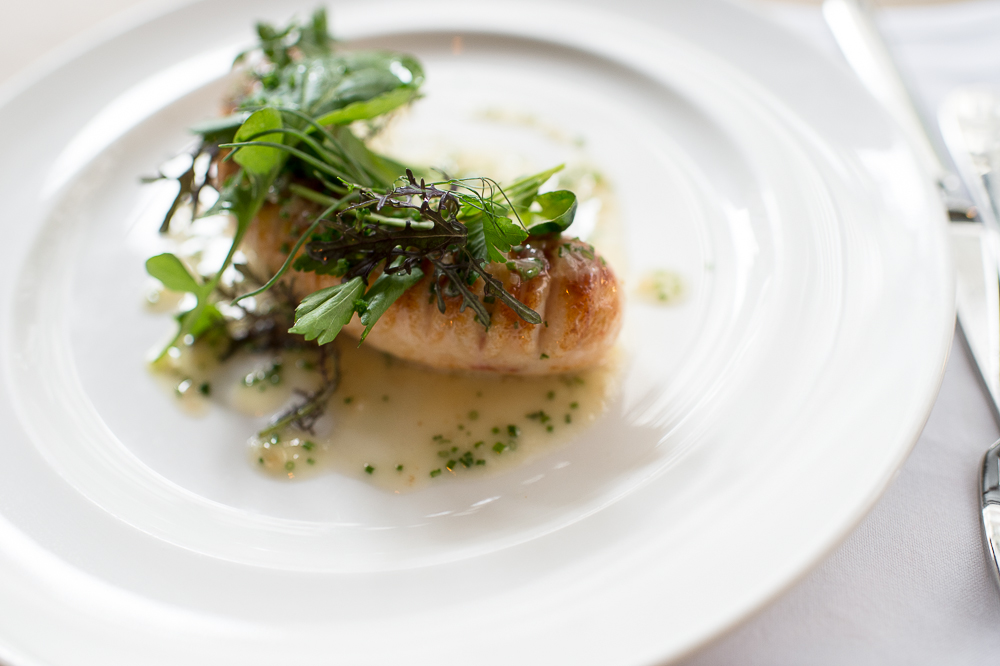 There are a few fish items on the menu too, and the best one of course is a sausage. The butter-drenched seafood brat is a crack blend of shrimp, scallops and lobster. Testament to Lecki's cooking is how each component sings through with remarkable clarity; it's how you wished frutti di mare would taste at Italian restaurant but never does. Lecki also makes a mean merguez sausage, topped with lemon breadcrumbs to counter the smoky harissa. She sends out a mild blood sausage, which practically crumbles itself into a runny egg. And she forges a forearm-sized pig's foot sausage, scented with nutmeg, fried and paired with spicy pickled vegetables. That $49 trotter for two is less about musky flavor of pork and a more about sticky, gelatinous, stomach warming bliss; leftovers will last for days.

Keep in mind that The Breslin's reservations policy* is pretty much identical to sister spot The Spotted Pig: It doesn't take them for the most part. And nor should it. Friedman and Bloomfield cater to hungry diners rather than plan-ahead people who insist on booking casual steak dinners 30-days out (and then cancel them). So don't be the plan-ahead person. Just swing by The Breslin in off-hours. I usually head over around 10:30 p.m. or later and grab a bar seat right away. 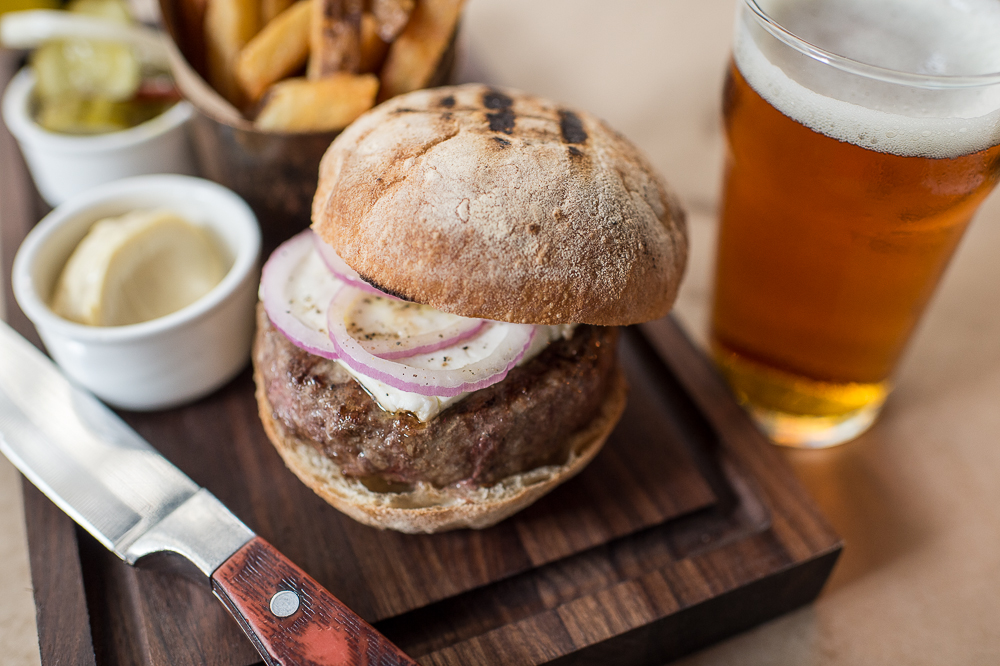 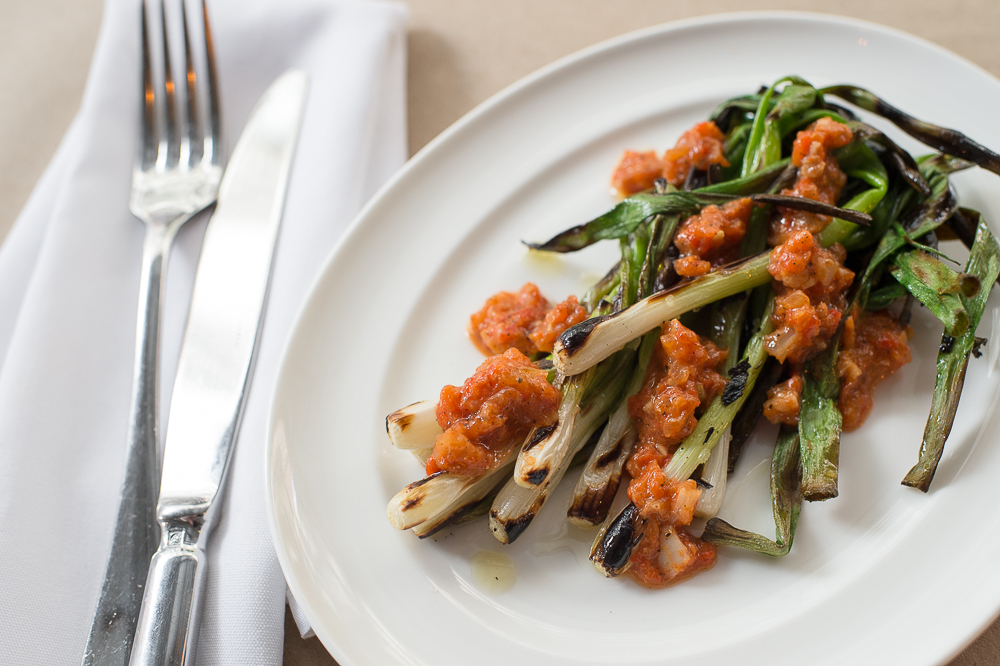 Is the grass-fed lamb burger sitting in front of every third patron? That's because it's just as compelling as it was when it debuted back in 2009; a side of cumin mayo lets you double down on the locker-room odor and the medium-rare meat is so soft it's almost as if you're eating a hot terrine on a bun. It's not as easygoing as an everyday beef burger and that's why The Breslin surely ranks with Ma Peche as New York's most envelope-pushing hotel restaurant; such establishments usually cater to a more conservative crowd.

Instead of chicken fingers The Breslin gives us scrumpets, fried batons of fatty lamb meant for dipping in mint vinegar. Instead of gussied-up pot pies for $36 we get stinky beef stilton pies for $9. And instead of a typical Caesar salad Bloomfield gives us an essay in fish oil, packing her croutons with more anchovy flavor than a jar full of anchovies. The lesson is this: Great chefs don't always ask diners what they want, they tell diners what they want, and if you disagree with that you can go to the local IHOP and build your own stack of pancakes.

For a number of years, my barometer for the official start of winter was whenever Bloomfield decided to put her bone marrow soup on the menu. Now that it's summer, The Breslin is doing a thin corn and squash soup. Skip it, and take a pass on the hen of the woods mushrooms with prosciutto too. Remember, you're here to eat meat, like a summery stew of swine. Lecki uses milk as her weapon, braising the pig down to the texture of pillows, and coaxing a riot of sage into a soft, herbal sweetness. Time for bed.

Or perhaps it's time for steak. The Breslin's ribeye for two, cooked in its own fat in a steel pan, has a dry-aged funk that's detectable before it hits the table and that lingers on your fingers for hours after. The meat doesn't quite have the same level of concentrated minerality that I fell in love with at Roberta's, but it's still a class-A cut. It boasts a level of fattiness that mandates a tannic California syrah ($16) as much as it does a Widow Jane Manhattan. Or perhaps more importantly, such bovine brilliance is yet another reminder to all the hedge funders and tourists tossing their money under the broilers at Del Frisco's, Wolfgang's, or STK that our city's best steaks are not to be found in steakhouses, but rather at restaurants with actual chefs. 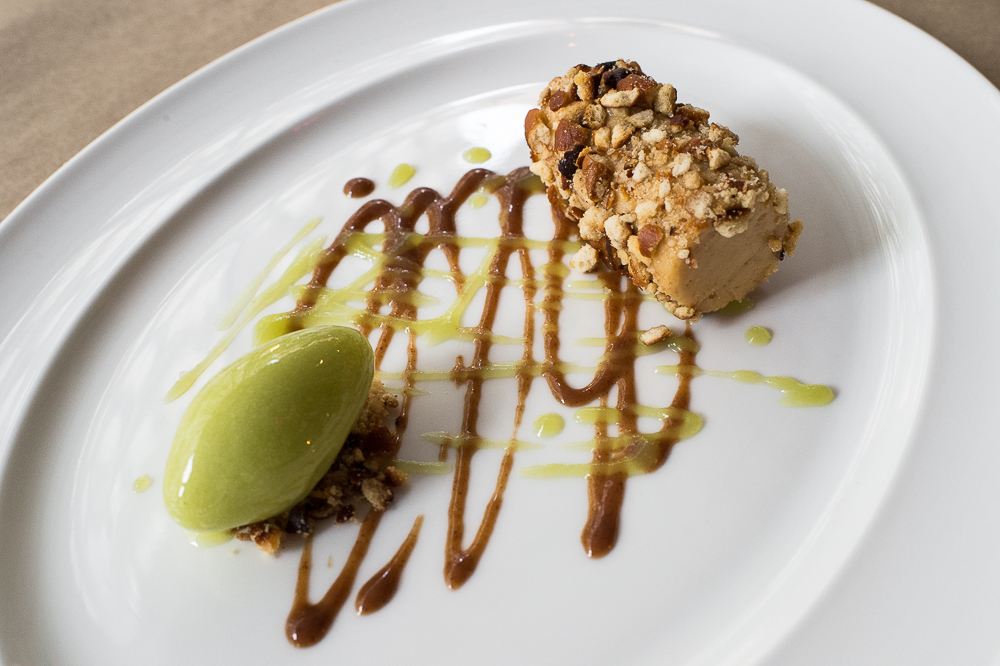 At this point you'd hope that desserts were terrible because you've already stuffed yourself beyond reason. Sadly, they're as excellent as they were back in 2009. Strawberry sorbet is so fragrant it could be sold in the perfume section of Macy's; throw a few spoonfuls of that into your Eton Mess (more strawberries, cream and crunchy meringue) and there's your summer evening in the British countryside.

A few nights back I passed by the chef's table at the tail-end of someone else's hog dinner. A pig carcass sat in the center, stripped to its bones like a garbage pail skeleton in a Heathcliff cartoon. It was a very particular type of haute-junkyard carnage that made me wonder whether the Breslin could do away with custodial staff and let in a herd of stray cats at night to do the cleaning. Perhaps not, but such are the meaty fantasies engendered by one of New York's great restaurants.

*Update: The Breslin now takes a limited number of reservations on OpenTable, following in the footsteps of Bloomfield's Tosca Cafe and The John Dory.

Our review of The Breslin

Cost
Starters at $20 or below; lamb burger at $21; other entrees at $31-$49. Steak is "market price"; we paid $114 for our ribeye. Chef's table dinners (reservations only) are $65-$95 per person, with a minimum of eight people, before wine, tax and tip. Fried chicken dinners start at $50 per person.
Sample dishes
Proteins from two or four-legged animals, as well as oysters with dill pickle juice, the deviled soft shell crab, Caesar salad, and that bodacious seafood sausage.
What to drink
Avoid the signature cocktails (like at most restaurants). Expect a fine selection of beer and wine, with two Rieslings by the glass. Champagne (Alfred Gratien) starts at $25 by the glass or $100 by the bottle.
Bonus tip
Come early, come late, or wait. Order the curried goat pasty whenever it's on the menu; a spicy Cornwall-esque pastry that's essentially a British empanada.