Why The Heck Does Carbone's Caesar Salad Cost $21?

Share All sharing options for: Why The Heck Does Carbone's Caesar Salad Cost $21?

Welcome to Suttonomics, where each week Eater Data Lead Ryan Sutton looks at facts, figures, and interesting data across the restaurant industry.

"It's hardly a salad," said Eater's Nick Solares when I asked him about the Caesar at Carbone, a Greenwich Village hotspot that tips its hat to the Italian-American chophouses of yesteryear, giant portions, tuxedoed waiters and all. "With all the egg, butter, and anchovies you might as well be eating a hamburger from a health perspective," Solares said. Just one thing: this salad is a heck of a lot more expensive than a proper hamburger. It costs $21.

That's up from $17 when Carbone opened last year. Add on tax and tip and you're at $27. It's the city's second spendiest Caesar, according to data compiled by Eater — two bucks more than the heralded version at '21' Club and a dollar less than the less-talked about creation at Nello.

Carbone, of course, is an all-around expensive hangout. Starters hover in the low-$20s; entrees hit the $40s and $50s; large-format lasagna will run you $85, and the steak for two costs $195. So the Caesar, prepared tableside by a wait captain in a red tuxedo, technically falls on the lower end of that pricing spectrum. 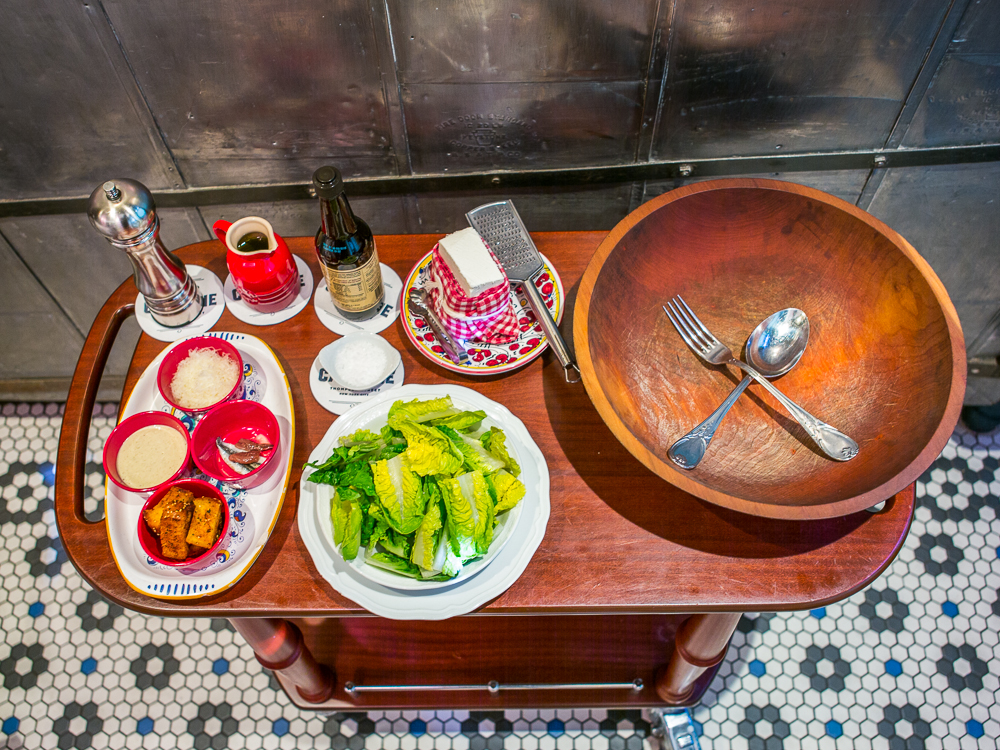 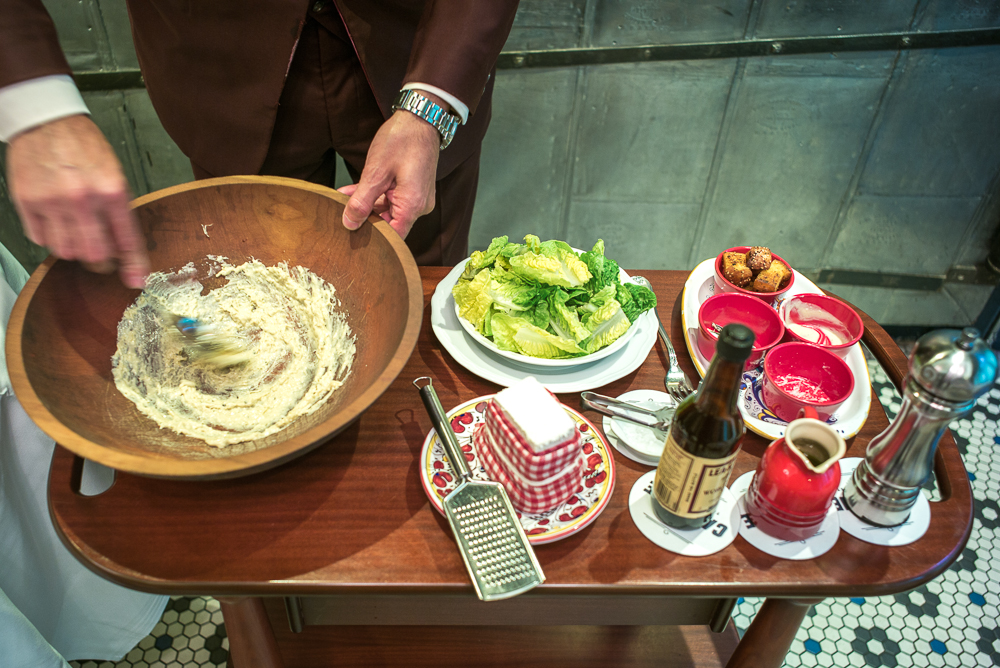 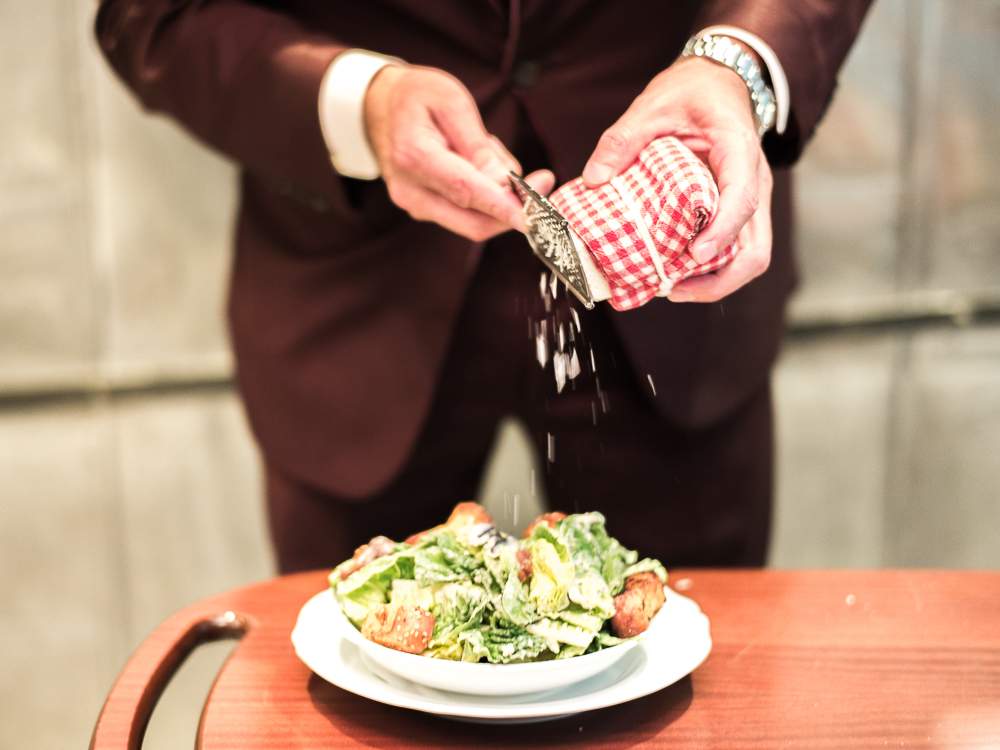 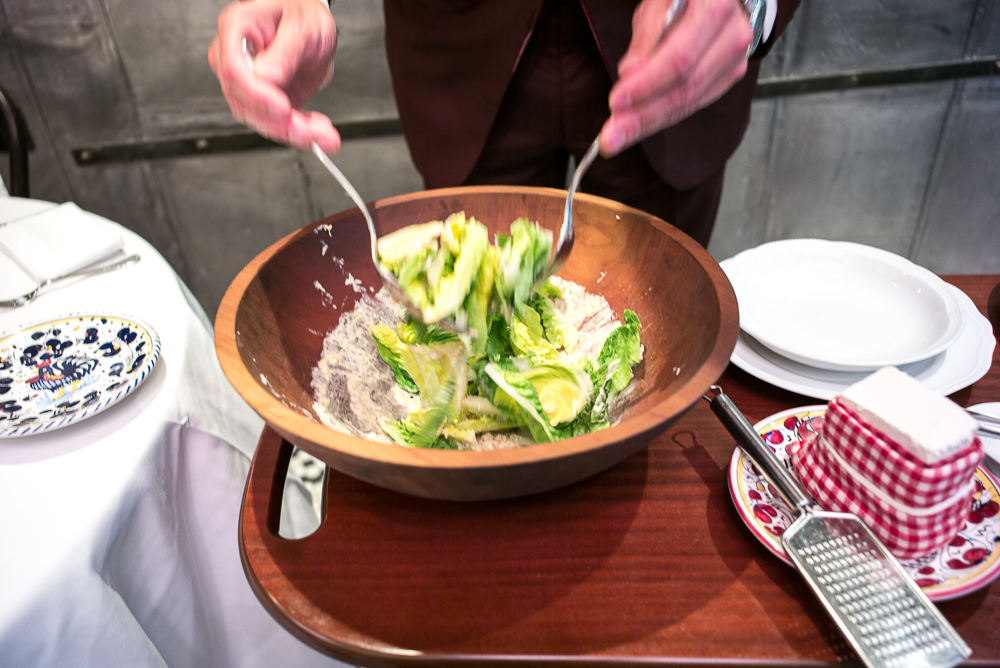 As is the case with most of Carbone's offerings, a single diner can theoretically finish the salad, but it's more appropriately-sized for three. The Caesar ranks among the restaurant's top five appetizers, and rightly so, because it's spectacular. The lettuce is cool. The anchovies are bright. And the croutons are cut from Parm's semolina rolls, which are then doused in compound butter (roasted garlic puree, tomato powder, chili flakes, dried oregano), and cooked to "medium-rare" so they're still soft inside.

But still. Why does it cost $21? It's all about the product, says chef Mario Carbone, who spoke with Eater about why he charges what he does. Here's what he had to say.

Why is your Caesar is so much more expensive than others around town?
Ninety percent of Caesars are pre-fabricated romaine heart product in cellophane packaging. We use hydroponic baby gem lettuce…We use a salted Spanish anchovy made by Ortiz…We also use white cured anchovies that we get from Despaña. The goal and the idea of this restaurant from the beginning was to make the best version of the classics, and to do that, you have to buy the best possible products...That's where we were going to get our competitive advantage. We are making most likely the most expensive version of something you've had many times before. If you can get over that fact, hopefully we can produce the best one as well, and if we don't we've failed on two fronts, we've given you an expensive one and it's not great. But if we can produce the best one you ever had or close to it, then we did the right thing.

Has Carbone ever raised its prices for demand-based reasons? Given how many people want your product you could probably hike things up a bit and make more profit, right?
No. As you know, we were definitely not shy about pricing from the jump here. From day one, when we put out the prices, we knew we were going to feel it. It's an expensive restaurant. We were coming from [sister spot] Torrisi being a $55 a head over-deliver spot, but we believed could still over-deliver even at this price. And there was an initial sticker shock. From the beginning we said we're going to serve the appropriate-sized portion to "tell the story," while simultaneously giving the customer a high grade product. To do both those things together makes for expensive food. Nothing here is really priced by popularity. If anything the [$55] veal parm is one of the more expensive things for me to make. Its definitely the most popular entree by a long shot. It a huge veal chop that's covered in homemade breadcrumbs and sauce and mozzarella. But there's only so far I can go with that price. I make a profit, on it. I don't make an aggressive profit; I make the right number. But I wouldn't raise it due to popularity. I think it's where it belongs.

Presumably you don't lose money on the Caesar salad either?
No, no. I'm not in the business of losing money. I don't want to put something on the menu that isn't priced accordingly. A loss leader is stupid. A loss is a loss. Restaurateurs need to not be bashful for charging appropriately…There's no reason to say you "we can't charge that number." You buy it. You say you need to get 30 percent food costs on it. You come to a number. And then that's the number. If you don't feel comfortable putting that number out on your menu, then you shouldn't serve that product. But don't lower the number because you think it looks bad on the menu. That's just bad business. I'm not embarrassed by any of my prices. I know I'm not gouging my customer. I'm giving them right portion size and product. And I'm giving them everything else that goes with the restaurant, every amenity that costs the house money that doesn't appear on the check.

Fair point, and I suppose it's hard to analyze the food cost of any individual item like the Caesar in a vacuum because of Carbone's tasting menu-style handouts, as well as the free booze at the end of the meal.
When you look at food costs, you look at it as a whole, including all the things we don't collect money for, like the enormous bread basket, garlic bread, grandma bread, fruit and nuts, all the canape giveaways, the cheese and prosciutto, limoncello, sambuca, rainbow cookies...We go above and beyond because it's stylistically true to the story of the restaurant. We factor in all these giveaways into the macro number and we make sure at the end of the month we meet our profit percentage...Also, we do a little live music now. We have the accordion players, a little mandolin, a little singing. We have captains who want to sing. They're Sinatra guys.

That's not free either.
Yeah, you got to pay and feed the accordion players.