Scott Bryan Brings the Mediterranean to The Bowery

Share All sharing options for: Scott Bryan Brings the Mediterranean to The Bowery 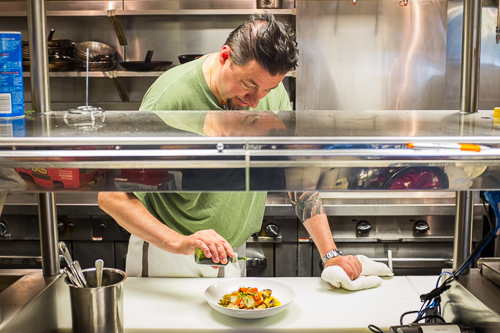 "This is a dish that you would expect to eat on the Mediterranean" says Bacchanal's chef Scott Bryan of the Chatham cod and Manila clams on his menu. The dish is what the chef describes as a classic two pan pick up — one pan to cook the cod and one for the clams and sauce. The combination of cod and clams is one that Bryan has worked with as long as he can remember, and he expects it to remain on the menu at Bacchanal for the foreseeable future. But it will change seasonally — in the fall, for example, he may add chorizo and couscous. But now in the height of summer, the current incarnation of the dish is much lighter.

The cod is simply seasoned and seared before being brought to temperature in the oven. Meanwhile Bryan prepares the sauce and clams in a pan, sautéing shallots and garlic in olive oil before dousing them in white wine and clam stock and steaming the Manilas. A handful of blanched and peeled tomatoes are added to the sauce at the end of cooking. The clam and cod come together over a white bean puree that adds body to the dish. Bryan describes the technique as "light and quick to maintain vibrancy."