Should You Order the $95 Tasting Menu at Dover?

Share All sharing options for: Should You Order the $95 Tasting Menu at Dover?

In our era of gastro-tourism for everything from $1,000 tasting menus to the most inconsequential of edibles — "Did you fly to Los Angeles for that new whole-animal lasagna shop?"— Dover in Carroll Gardens, at its best, feels like a welcome throwback to what neighborhood restaurants do best, drawing in passers-by with affordable, accessible fare.

Cocktails are compelling enough to merit a visit on their own. Lamb tartare, laced with Sriracha and finished with whole leaves of mint, arrives with a side of fluffy pita that would easily command a $4 supplement elsewhere in our starch-stingy city. The heralded kitchen, with its Southern French inclinations, even deigns to serve brunch. And the outdoor garden lets guests watch the nighttime fireflies glow as a cool summer breeze blows through South Brooklyn. Perfect.

Then you're presented with a $95 tasting menu, which incorrectly sits atop the excellent a la carte menu. Order it and you might dispense with over three hours of your time and upwards of $325 after wine, tax, and tip for two. 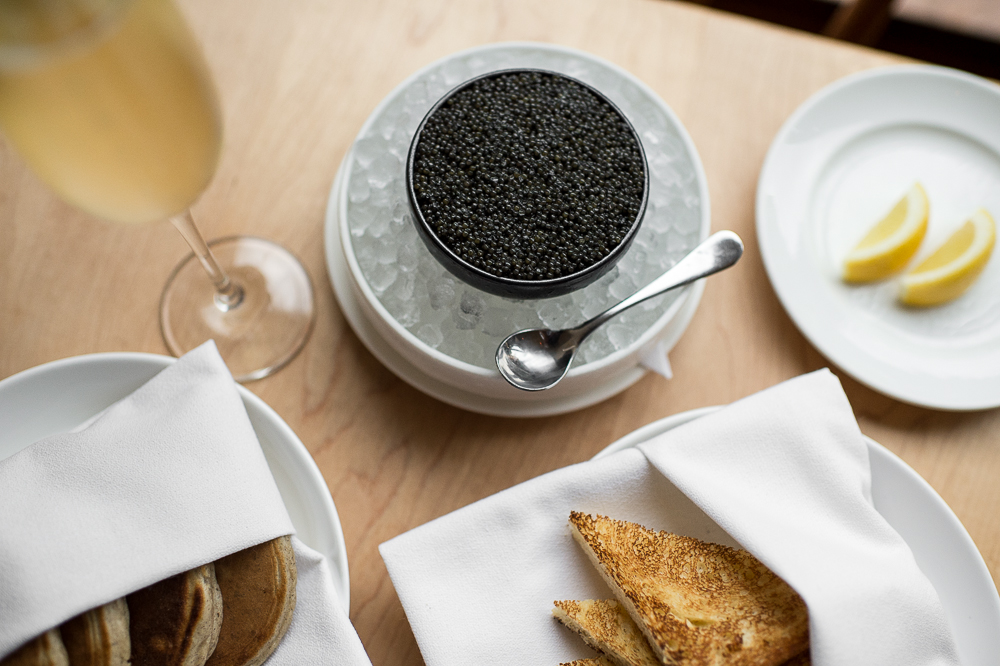 No, Dover isn't terribly expensive by modern Brooklyn standards, but that tasting menu carries a heck of a price tag. And it is long enough (nine plus-courses) to make the eight-month old venue feel like another manifestation of The Destination Neighborhood Restaurant, a local spot attracting, whether intentionally or not, a citywide and sometimes countrywide following. Dover's culinary team, Joe Ogrodnek and Walker Stern, were the only two New York delegates in Food & Wine's 2014 class of "best new chefs." Bon Appetit named sister spot Battersby the third best new U.S. restaurant for 2012. And GQ named the then three month-old Dover one of the 25 best new restaurants in America in March. Congratulations.

Too bad Dover isn't equipped to offer its most expensive wares to those crossing borough lines, never mind state lines. The $35 caviar pie is a study in how much uninformed diners will pay for mushy, low-grade paddlefish roe. The $65 chicken barely rises above the level of mediocrity — a bland, under-salted breast in an otherwise fine piperade, and a floppy-skinned thigh in a more concentrated pepper jus.

And then there's the tasting, which Dover says about 25 percent of the guests order most nights. One of the first courses on a recent Friday was a tiny ramekin of what we (correctly) guessed to be gazpacho; the waiter's description was barely audible amid the din of the room. Is there a bit of oxidized gray around the foie gras torchon, and a bit of sinew inside? Hard to tell because the lighting's too dark at Dover post-sunset. A cozy bistro serving grilled skirt steak can keep things dim, but part of the fun at a tasting menu spot is taking in the beauty of the composed dishes in full Technicolor. 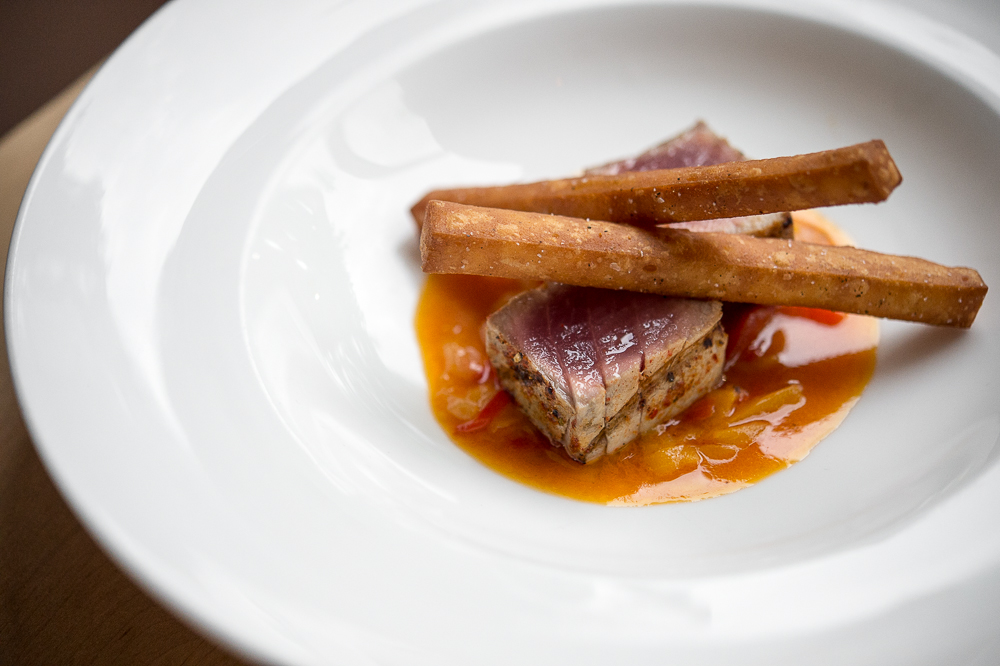 There are flashes of genius during the tasting, just not enough. Rare grilled tuna, the throwaway dish of the early aughts, finds new relevance here. The interior is cool and crimson while the toro-like edges are oily and oozing with umami-rich maritime flavor. The fish sits in a pool of intense red pepper sauce and is topped with chickpea fries for dunking. Even better are ruby red shrimp from Maine, packing the distinct iodine tang you'd expect from the regal Mediterranean crevette. Dover tosses the bite-sized crustaceans into a pool of white almond soup so silky and tart that it could command 100 euros at Alain Ducasse's Le Louis XV in Monaco.

There are flashes of genius during the tasting, just not enough.

Then you encounter a tomato, burrata, and strawberry salad that's little different from something your hedge fund buddy made last week at his Hamptons pool party. There's also pici pasta with butter, chanterelles, and parsley, which are coated with so many sandy breadcrumbs it's as if someone accidentally dropped the noodles on East Rockaway Beach. Lamb ribs with eggplant and mint feels less like a composed dish, more like three disparate ingredients thrown into a single bowl. If the tasting menu's individual plates sometimes taste like unfinished ideas, the $95 menu as a whole has the feel of a random collection of a la carte dishes, an iPod shuffle version of an omakase instead of the full length album it needs to be. 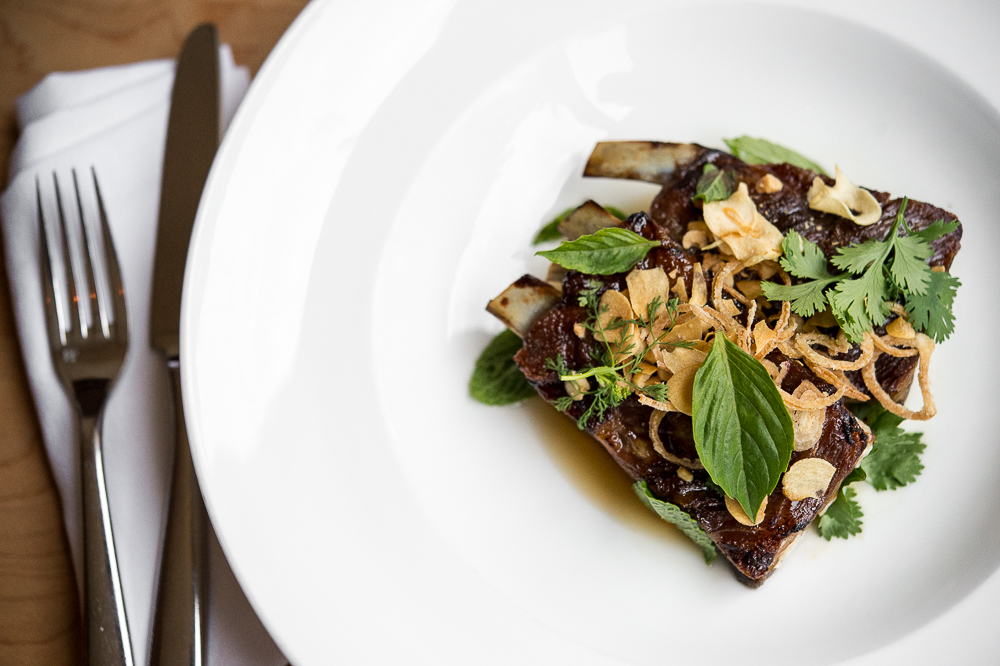 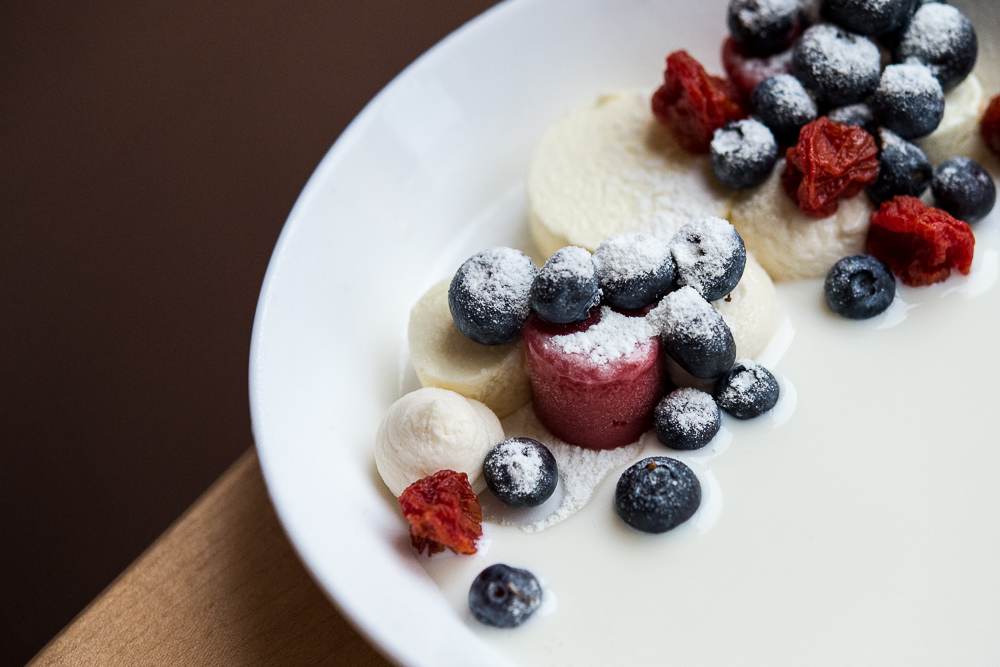 Avoid the tasting and you'll eat well, possibly very well. Pastas, appropriately portioned as appetizers, are the right call here — be it ricotta ravioli with zucchini or a richer pile of garganelli with pork ragu. Cod in an aioli-thickened fish fumet, a culinary ode to the color off-white, is as meaty and buttery as blanquette de veau. Just as good is king salmon with tomato confit, packed with insane oceanic oils.

Order the pithivier whenever it's offered as a special. The $32 pie layers all the aromatic brilliance of the Mediterranean — tomato confit, red peppers, black olive paste, zucchini — into a mammoth flaky tart that feeds three. There's your (single) destination dish.

But still. Let's give these talented young chefs a little time to get their act together before we start piling on the national accolades.

Our review of Dover

Cost
$95 for the tasting. $12 - $21 for starters; $27 - $33.50 for mains.
Sample dishes
Oysters, raw tuna with ponzu, most any pasta, any fish, Berkshire pork with warm peaches.
What to drink
Fairly priced wines by the glass at $11-15. The cocktails we sampled were stellar; try the Carolina cross, a mix of tequila, watermelon and cumin.
Bonus tip
Reserve tables on CityEats; walk-in for the garden or the bar. The $65 chicken, while not terribly good, comes with kick-ass saffron-scented rice.