Does New York City Have a Secret 'Colorado Connection'?

Share All sharing options for: Does New York City Have a Secret 'Colorado Connection'?

Right now, New York City is full of talented chefs and sommeliers that either grew up in Colorado or spent years working there. Two establishments in particular — the culinary program of The Little Nell resort in Aspen and Frasca Food & Wine in Boulder — have had numerous former employees go on to prominent positions in NYC restaurants. Among those are Dustin Wilson, the sommelier at Eleven Madison Park, Sabato Sagaria, chief restaurant officer for Union Square Hospitality Group and seemingly the entire staff of Charlie Bird, to name but a few.

Is Colorado turning into a farm system for NYC kitchens? Is this just a strange coincidence? Or is there, in fact, a Colorado connection? Eater talked with some of the state's notable expats to find out just why, exactly, so many talented hospitality professionals are migrating from Colorado to New York.

Colorado is in many ways the quintessential western state, and the resourcefulness and spirit of independence that were such driving forces in the migration across the plains still manifest themselves there. "It's hard to live in Colorado if you are not a motivated person," says Ryan Hardy, chef and owner of Charlie Bird in NYC. Originally from Kentucky, Hardy spent a decade in Colorado prior to moving to New York and opening his own restaurant. He has played a role in the cross-pollination of restaurant cultures between the two places, bringing others from Colorado, such as Grant Reynolds, the wine director at Charlie Bird, with him.

The ruggedness of the landscape makes cooking in Colorado challenging because of the short growing season and relative isolation. "It was tough getting ingredients," admits Hardy, so much so that he took matters into his own hands and bought a farm to supply him fresh produce. Hardy moved to Colorado in 1999 after graduating business school and deciding that he would rather cook beans than count them. A brief stint in culinary school proved to be fruitless. "It was like business school with knives," says Hardy. Instead the chef worked in every restaurant he could, eventually landing at Rustic Bistro in Aspen. 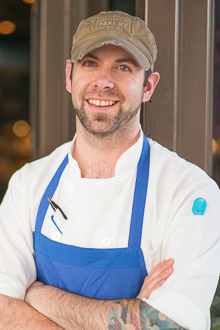 Hardy was attracted to Colorado because of the lifestyle it afforded him and because he "loved the outdoors — fly fishing, skiing, mountaineering, trail running." It is a theme that's echoed by a lot of people who have lived there. "The lifestyle is incredible" says Matt Aita (pictured left), chef of Le Philosophe, who worked in Colorado in the early 2000s before moving to NYC mid-decade. Aita planned on visiting Colorado for only two weeks, but found it so "gorgeous" that he ended up staying for five years.

Sabato Sagaria, currently the Chief Restaurant Officer for Union Square Hospitality Group, moved to Colorado on a whim, after working at the renowned Inn at Little Washington in Virginia. He gave little consideration to the leisure aspects of the state, but soon became enraptured by the lifestyle. "You know you are in a special place when you keep your snowboard in your office," he says. "The minute you walk out your door you hop on your bike or snowboard, and you're in the fresh air and wilderness." 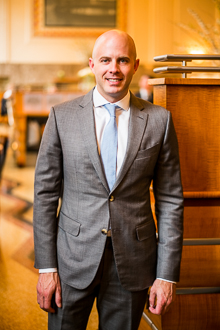 Reynolds, for his part, moved to Colorado to attend UC at Boulder and to pursue skiing, which he did competitively for much of his life. "Colorado has it all in outdoor sports," he says. "The lifestyle is epic," concurs Dustin Wilson (pictured right), currently wine director at Eleven Madison Park and a veteran of both Frasca Food & Wine and The Little Nell. Wilson ended up in Colorado with the intent of "goofing off" for a couple of years after graduating college, before he planned to enter graduate school. As an avid skier, his principle job requirement was that he wanted to work nights, so that he could hit the slopes during the day. Wilson had acquired the wine bug while working at a steakhouse, and had even begun taking classes back east in his native Maryland. But a chance meeting with Bobby Stuckey, master sommelier and owner of Frasca Food & Wine, led to job and a lengthy stint that saw him go from server to sommelier at the restaurant. From there he moved on to The Little Nell, eventually became a Master Sommelier himself, and landed his "dream job" at EMP.

Bobby Stuckey is a seminal character in Colorado food and wine. He joined The Little Nell in 1995 as a sommelier, garnering numerous awards for wine and service. In 2000 he went on to work at The French Laundry with Thomas Keller and then returned to Colorado to open Frasca Food & Wine in August 2004.

It is hard to overstate the significance of The Little Nell and Frasca in shaping the dining scene in Aspen and Denver respectively, and by extension NYC as well. According to Aita it "changed the landscape" when it opened. Prior to that "the dining scene was pretty horrible," recalls the chef. Owen Clark grew up in Baysville, CO. He made it to Boulder after Frasca was firmly established, and was duly impressed. The chef explains: "I was like "Oh boy! That's the place I want to work." He didn't end up working at Frasca, but by attending the culinary school he got to travel to France and eventually landed in NYC at the ill-fated Gwynnett St.

But aside from a profound culture of food and wine, there is clearly another affinity between NYC and Colorado: adrenalin. "There is a similar intensity to the people (in NYC and Colorado) — they work hard and play harder. Aspen really is a little bit of New York City in the mountains," says Hardy. Sabato draws a more visceral comparison "You are standing at the top of a double diamond looking down, asking yourself 'Can I do that?' And then you just jump in, that's the same mentality you need when coming to NY."

"Aspen really is a little bit of New York City in the mountains."

Ultimately, the chefs and sommeliers in question moved to NYC because of professional opportunities. "There is no doubt that NYC is the center of the wine universe," says Wilson. "But Colorado is my second home," he says unequivocally. Aita, now married with children, still misses the place and looks forward to returning. "It would be amazing to bring my wife and kids out there," he says. As much as Hardy loved it out there, he feels that the "economics work better" when running a restaurant in NYC. Sabato has another theory: "Colorado is way too beautiful and everyone got sick of it and said let's move to NY" he quips.