Share All sharing options for: GG's, Yonekichi, The Prescott, and More Coming Soon

[Kat O'dell]
1) Alphabet City: Nick Morgenstern's transformation of Goat Town into GG's is underway at 511 E. 5th St. The revamped space is slated to open in September with Bobby Hellen, formerly of Resto and The Cannibal helming the kitchen and Emily Schumacher of Jack's Wife Freda running service. Here's a view from the garden out back. [PLYWOOD]

3) West Village: Prime 135 will fill the long vacant Tanti Baci space on the corner 7th Ave South and West 10th St. The 40-seat restaurant is currently looking for staff and plans to open mid-August. A representative tells Eater that the food will be "Italian American fusion" with some Spanish influences showing up on a weekend brunch menu. [PLYWOOD]

4) Chelsea: According to a sign posted on the building's 20th St. side, it looks like Steve Martinek's new clubstaurant in the Chateau Cherbuliez space will be called The Prescott. The name comes from an Anglo-Saxon word that means priest's cottage. Expect it to open behind the doors of a confessional in the fall. [PLYWOOD]

5) East Village: Red and Gold Crab Shack signage is up at the former Japadog space at 30 Saint Marks Pl., reports EV Grieve. So far, there are no more details available. [EV Grieve]

6) Greenwich Village: The Birdbath Bakery location on the north east corner of 6th Ave. and 11th St. appears to still be under construction in the old Nicky's magazine shop space. When it opens, it will be the city's 9th location of the bakery. Its sister spot on 3rd Ave is still curiously closed. [PLYWOOD] 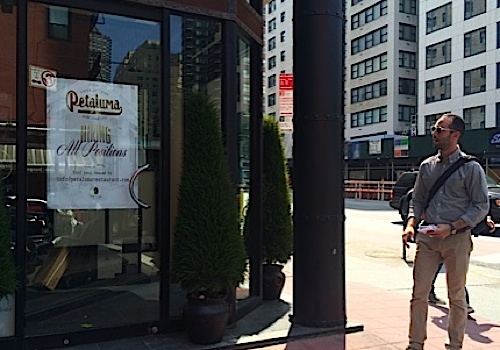 7) Upper East Side: Neighborhood Italian mainstay Petaluma is being re-launched with a new menu by The Line Group, which also operates Sons of Essex, and The Raven. The space will have seating for 33 in its outdoor café and a 70 person private dining room. [PLYWOOD]

8) Bed Stuy: A French bistro is coming to the corner of Malcolm X Blvd. and Hancock St. The restaurant is slated to open in two months, reports Brownstoner. [Brownstoner]