Eateries that serve the cuisine of Puebla, and the nearby states of Guerrero and Morelos, all in southern Mexico, have become common in the five boroughs. Evolving from bodegas that set up makeshift taco stands, the restaurants eventually fell into two categories: those that served beer and resembled bars, and the more brightly lit spots that catered to families and refused to provide alcohol. Newcomer Bella Puebla falls into the second category. And it's the Pueblan restaurant with the most complete menu in the city and the one most prepared to receive customers from the city's general population.

Located in eastern Jackson Heights right on Roosevelt Avenue, a juice and snack counter thrusts onto the sidewalk; just inside find a steam table with a pristine display in bright earthy colors of brick red, drab olive, and midnight brown. A long prep counter then leads to a large dining room, mirrored, acid green, and draped with serapes and sombreros. 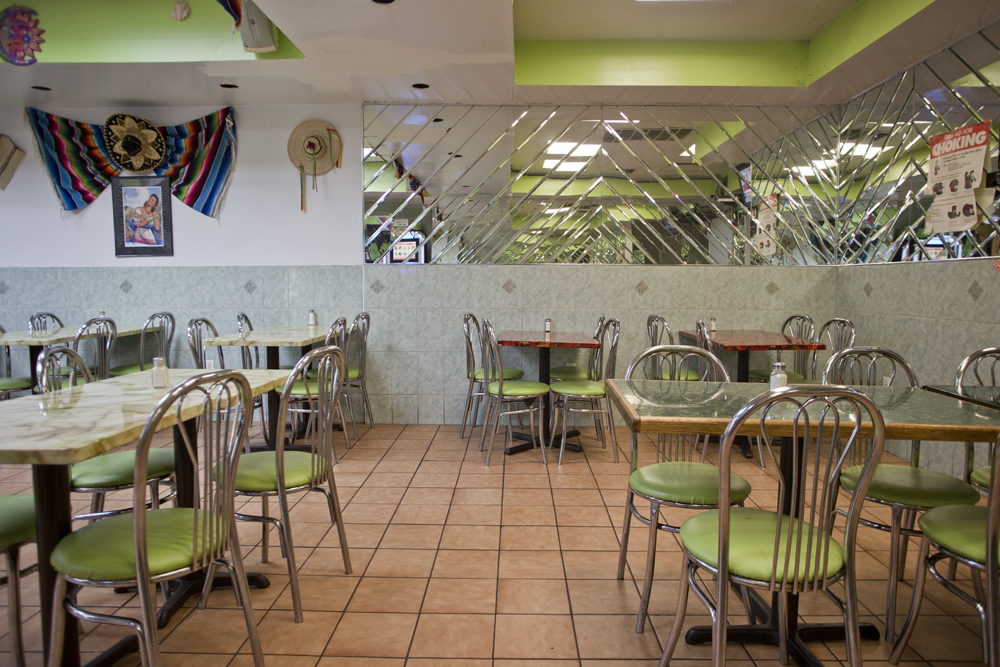 Sure you can get excellent tacos freighted with standard fillings like carnitas, bistec, and pollo, or porcine variety meats such as cabeza (face), oreja (ear), and buche (esophagus and stomach). But the extended menu also includes tacos that you or Alex Stupak have probably never heard of. One delectable little number is tacos arabes ("Arab tacos"). Consisting of a grilled flour tortilla rolled around a filling of pork al pastor, these tacos were introduced to the city of Puebla by Iraqi immigrants in the 1930s, who used homemade pitas, yogurt, and charcoal-grilled mutton to create a Mexican pita sandwich. About the same time, Lebanese immigrants introduced the method of cooking meat on a rotating vertical spit used to make shawarma, and this evolved into pork al pastor. Two to an order and neatly wrapped in butcher paper, tacos arabes ($6) are served with charred green-onions, radishes, and lime wedges. These days, you'll have to bring your own yogurt.

The waitress giggled as she served it, then handed us a fork.

Another off-the-wall taco is the placeros, which means "market taco." Immigrants from Morelos brought the first one here a few years back and served it from a cart on Roosevelt Avenue. Now it has become commonplace in Middle Queens. Back home these tacos served as cheap market snacks, usually filled with boiled eggs and vegetables, though some contained random meats. The strangest from the Queens cart had an entire chile relleno pressed into a bed of rice on a pair of corn tortillas. Now Bella Puebla has embroidered on the formula by creating a monster taco placeros ($8) featuring a chile relleno, boiled egg, oiled potatoes, chiles, and yellow rice, an ode to New York's culinary opulence. The waitress giggled as she served it, then handed us a fork. 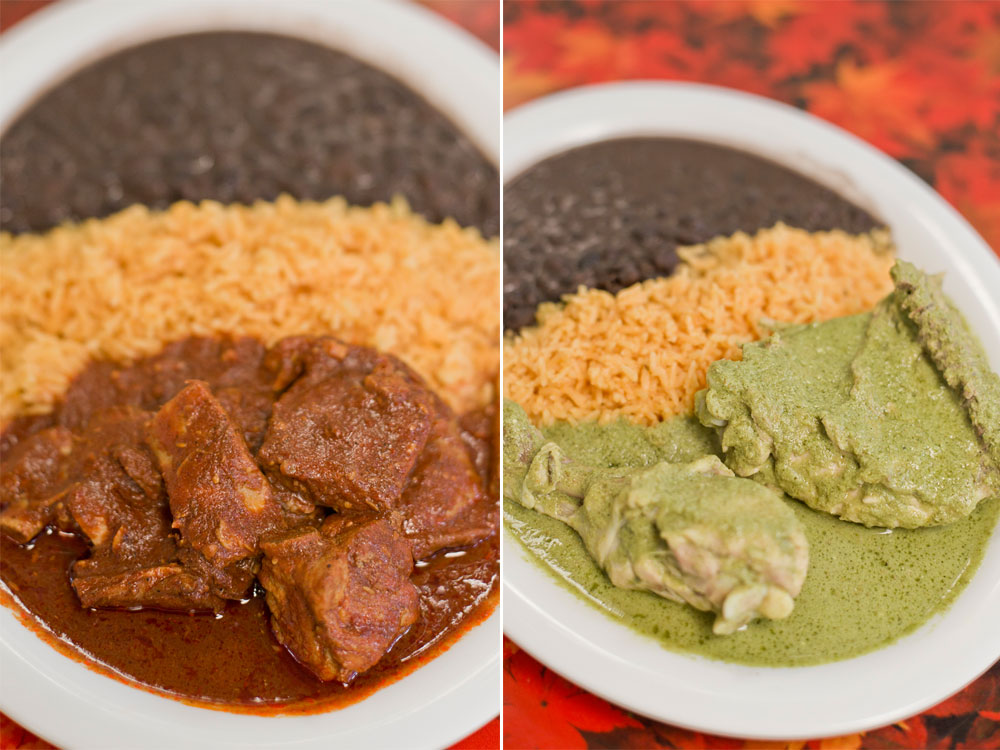 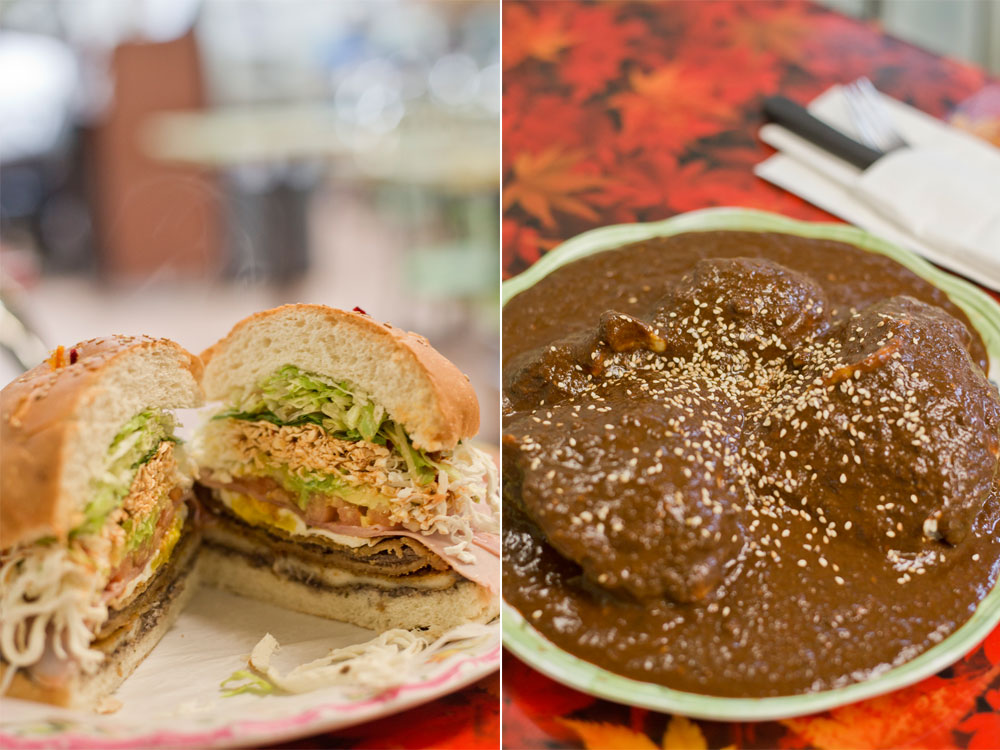 Bella's catalog of fringe southern Mexican dishes also includes the frequently available red pipian (pumpkinseed) mole ladled over a quarter chicken. Check the list of specials on the chalkboard as you enter the restaurant. While the pre-Columbian sauce called mole pipian is usually a milky shade of green, this one ($11.95) is deep orange, and dances with droplets of red chile oil. That doesn't mean the sauce is scaldingly spicy, though it has a rich loamy flavor. If you want spicy, head for adobo de puerco: clumps of meaty swine ribs in a mighty scarlet sauce that will singe your lips. Be forewarned: According to the same waitress, it's the hottest thing on the menu.

Most special of all may be guashamole, a weekend special of pork or beef in an ancient puree made from pounded guaje seeds.

Other recommended dishes include a menudo (tripe soup) with a nice barnyard flavor, and a cemita — the round sandwich of Puebla, on a seeded roll said to contain cactus pulp — made in emulation of a Cuban sandwich, for a little cultural one-upmanship. Most special of all may be guashamole, a weekend special of pork or beef in an ancient puree made from pounded guaje seeds, the ones you see in the long green pods in Mexican groceries, more often sprinkled on tacos for added crunch.

There are a few things to avoid at Bella Puebla, including the antojitos like quesadillas usually made from freshly hand-patted masa: the sophisticated kitchen uses pre-formed shells much thinner than the ones you get, say, at the Red Hook ball fields. The mole de olla — a thick vegetable-and-beef soup beloved of Pueblans — is here thrown-together and thin, mainly undercooked green beans in a tepid red broth.

But most of the food on the menu at Bella Puebla is spectacular. It just may take you a year or two to fully explore the colossal 160-dish menu. And you'll have to do it without benefit of beer.

94-11 Roosevelt Ave., Jackson Heights, Queens
718-639-7300
Open seven days, 9 a.m. - 10 p.m.
How much does it cost? A taco placeros, plate of mole pipian pollo rojo, and two Jarritos sodas shared by two diners, $25 plus tip.
What to drink: No alcoholic beverages, but a broad range of Jarritos sodas (try tamarind or grapefruit) and freshly prepared juices (including watermelon and hibiscus) are available. The horchata (homemade rice-based sweet beverage) is some of the best in town.
Ideal order: Tacos arabes, adobo de puerco, menudo (tripe soup), mole enchiladas con pollo, oreja taco, lengua huarache, cemita Cubano, guashamole de res.
Bonus tip: The tacos are often constructed with freshly made tortillas, so get tacos instead of quesadillas or picaditas. Avoid the gorditas, too, due to density and greasiness.


* A note on the ratings: Robert Sietsema awards red stars on a scale of zero (disappointing) to four (exceptional). His main focus is on ethnic, lower cost, and/or mid-level eateries around the five boroughs. His colleague Ryan Sutton awards his own set of (different colored) stars.
Email Robert Sietsema at robert@eater.com and follow him @robertsietsema.