Feel Food, a Latin Oasis of Superfoods in the Village

Share All sharing options for: Feel Food, a Latin Oasis of Superfoods in the Village

Welcome to The Green Scene, a new series in which Eater Editorial Producer Kat Odell unearths delicious healthy restaurants throughout the city that endorse a sustainable lifestyle. 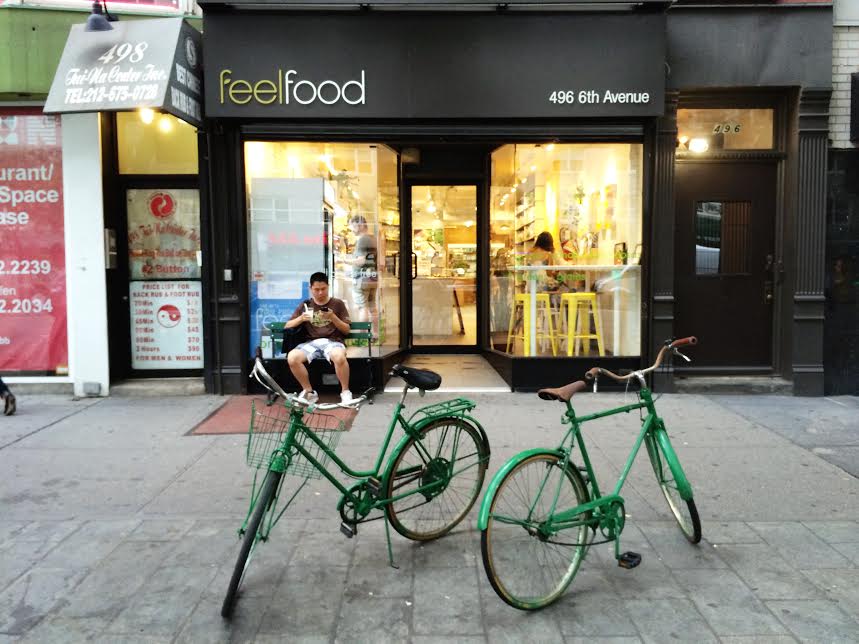 "I've been trying to quit cooking" admits Feel Food co-owner Fernando Aciar with a boyish grin. Lucky for New Yorkers though, things haven't gone exactly according to plan. Nine months ago, Aciar and business partner Gaeleen Quinn threw open the doors to a bright, whitewashed, juice-focused cafe on 6th Avenue between 12th and 13th Street in Greenwich Village. But fast-forward to today and Feel Food isn't just a juice joint. It's a cheerful boîte pushing superfood-spiked bowls, salads, wraps, yogurts, and drinks. And while about 40 percent of the edibles here are raw, this is not a place that frowns upon chicken. 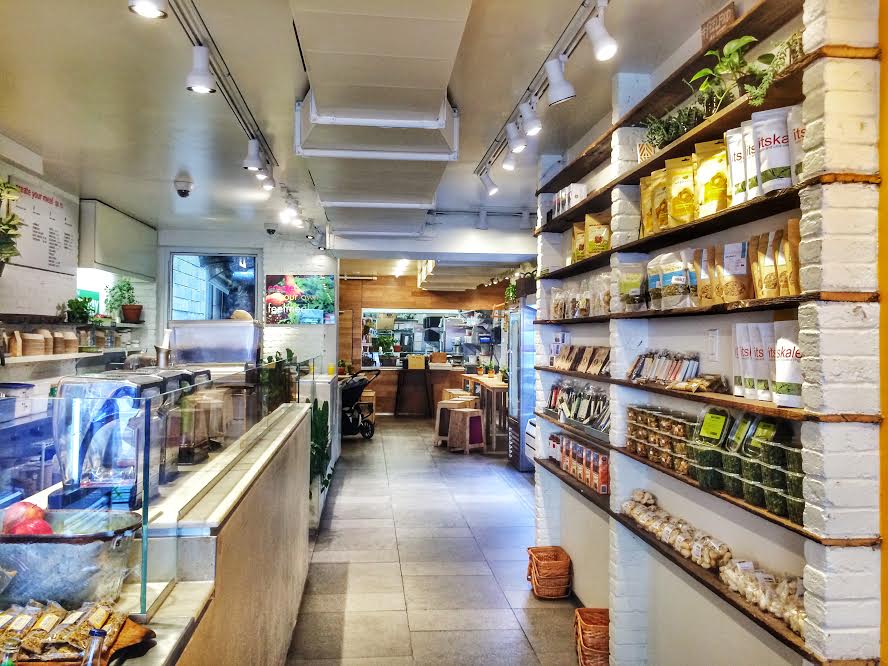 The goal was simple. "I was just trying to bring good food to people," explains Aciar. Initially, while writing the business proposal for Feel Food, Aciar planned to serve an exclusively raw menu. That generally excludes animal-derived products, referring mainly to fruits, veggies, nuts and seeds not heated above 115°F or 118°F, depending on the raw foodist you ask. But Aciar doesn't follow a raw diet himself. In fact, he's a trained chef who worked for six years with one of Argentina's culinary heavy hitters, Francis Mallmann, the man who made South American wood-fired food famous.

Ultimately, Aciar believes in moderation. Healthy eating, but a balanced diet that doesn't exclude animal proteins. Which is why Feel Food serves chicken and fish alongside a fruit and vegetable-heavy bill of fare. Yogurt, goat cheese, and eggs come from Finger Lakes Farms in Ithaca, NY, and there's Amish cheddar from Millport Dairy out in Lancaster, PA. Although 90 percent of the ingredients at Feel Food are organic, what Aciar insists is paramount is knowing where your food comes from. Establishing relationships with local farmers, and understanding the practices they use to produce honey or grow kale. And this careful approach to sourcing product locally and understanding flavors, along with a belief in a healthy balanced diet —plus a little Latin superfood love — is the recipe that has established Feel Food as a standout healthy eats cafe that goes beyond the "farm-to-table" buzzword that's now all too familiar. 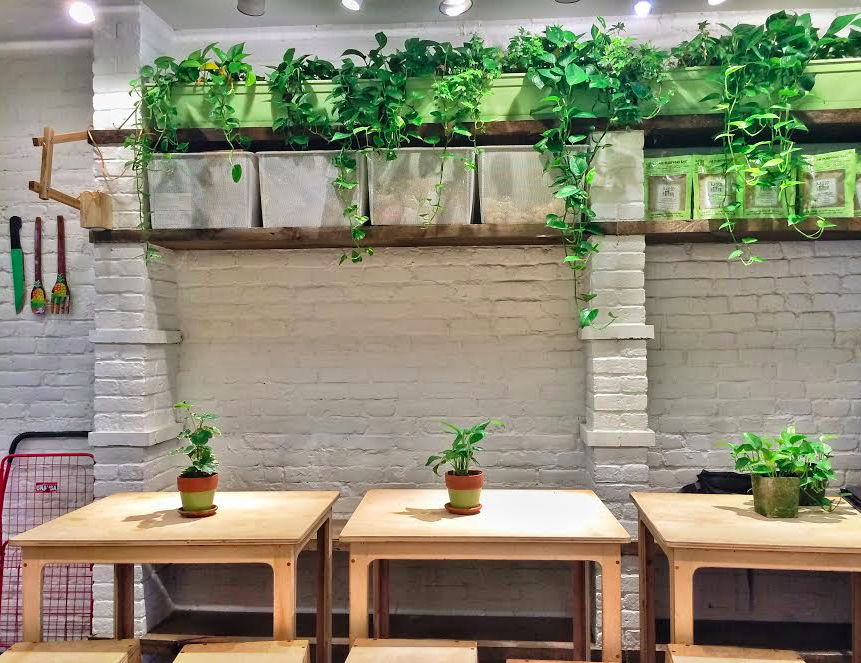 Aciar grew up on a potato farm in the Andes mountains in Argentina, and at age 18 he landed a job working with Mallmann. Aciar traveled through Latin America with the chef, helping to open 1884 Restaurante in Mendoza, Los Negros in Punta del Este, Uruguay, and Patagonia West on Long Island (the latter two have since shuttered). After six years he found himself in Rio de Janeiro, working a consulting gig that he had expected to last 20 days. Instead, Aciar stayed seven years. He fell in love with Brazil and opened Café du Lage in a stunning old mansion within subtropical park Parque Lage. (Fun fact: Snoop Dogg and Pharrell filmed the music video for "Beautiful" here.) But growing the restaurant proved difficult, and when friend/fellow chef Ignacio Mattos (presently of Estela) asked Aciar to help cook and manage the floor at Il Buco in NoHo, Aciar jumped at the opportunity for a new adventure. So he sold his cafe and bakery and decamped to New York.

Aciar remained at Il Buco for a year before choosing to return to Brazil and explore the country for a year. It was through these travels that he discovered raw cacao and coffee, and thusly embarked upon a voyage researching the two foods. During this time he put together a business plan to open O Cafe. One year later, in 2011, O Cafe hit 6th Avenue and 12th Street, and just six month in Aciar started to consider his next venture, Feel Food.

While O Cafe is a coffee-driven operation brewing lauded Miami roaster (and Young Guns winner) Panther Coffee and offering American and Latin snacks like pao de quiejo (a gluten-free Brazilian cheese bread made from yuca flour and Brazilian Minas cheese), Aciar explains the progression from O Cafe to Feel Food as a personal evolution. After launching O Cafe, Aciar fell in love with his neighborhood and realized that it needed something different. Something casual and healthy. 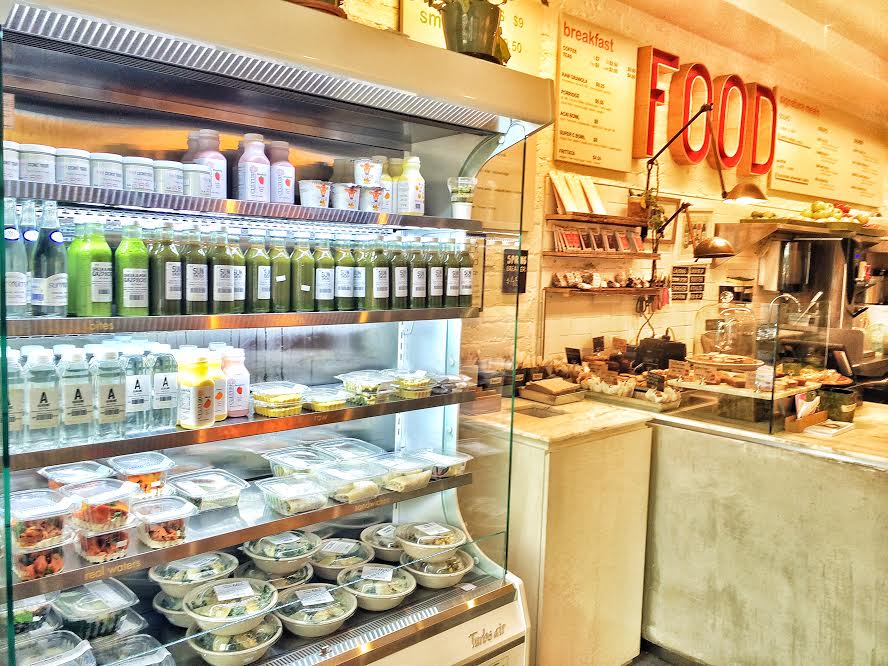 Despite the recent profusion and popularity of juice bars, in a carbohydrate-devout city like New York, as opposed to Los Angeles, it's hard to predict how locals will respond to a cafe pushing chia seed pudding and coconut yogurt topped with esoteric ingredients like cupuaçu (a fruit from the rainforest related to cacao, with a flavor profile likened to chocolate and pineapple) and cajou (fruit from the cashew tree). Which is why Aciar says he didn't have any expectations prior to opening. "I thought it was going to be something good for the people," he states, describing his initial vision for Feel Food as a sort of healthy supermarket focused on juices, but also selling salads and wraps. But over the last nine months Feel Food has evolved from a liquiteria to a mini restaurant that emphasizes food over drink. "It's all about listening, being open ... you talk to people ... I am doing something for the people so I have to listen to what they want," he says. Sure, Aciar isn't going to be stocking soda any time soon (though you can swing by for Rose Calendula Water or Cashew Turmeric Ginger Milk!), but following the path of healthy eating using wholesome ingredients, he's open to suggestions. 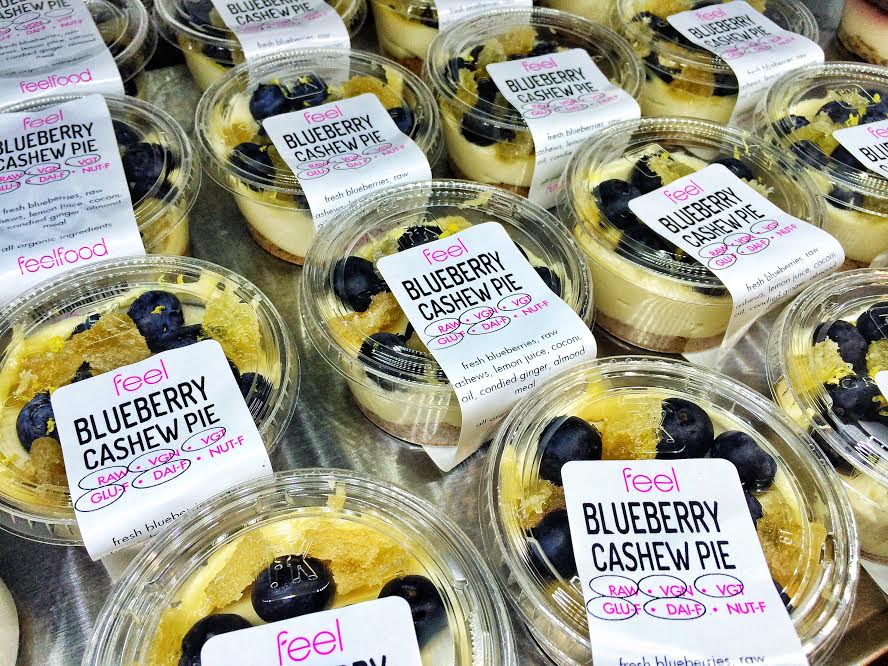 Snacks line the walls and stock the fridges at Feel Food. There's raw granola from Brooklyn-based Dr-Cow, strawberry and mango probiotic yogurt drinks from Culture, another Brooklyn-built operation, and kale-chia chips by itskale out in Queens. One will find house-baked Parmesan, Flax, and Coconut Oil Yuca Cheetos, which are sold under the Feel Food brand, in addition to addictive seasonal house-made Brazil nut lime ginger bars. Cabbage chips tossed with pumpkin seeds, also made onsite, are equally habit-forming. Aciar's vegan coconut yogurt is Feel Food's most labor-intensive product, and it's a personal favorite. 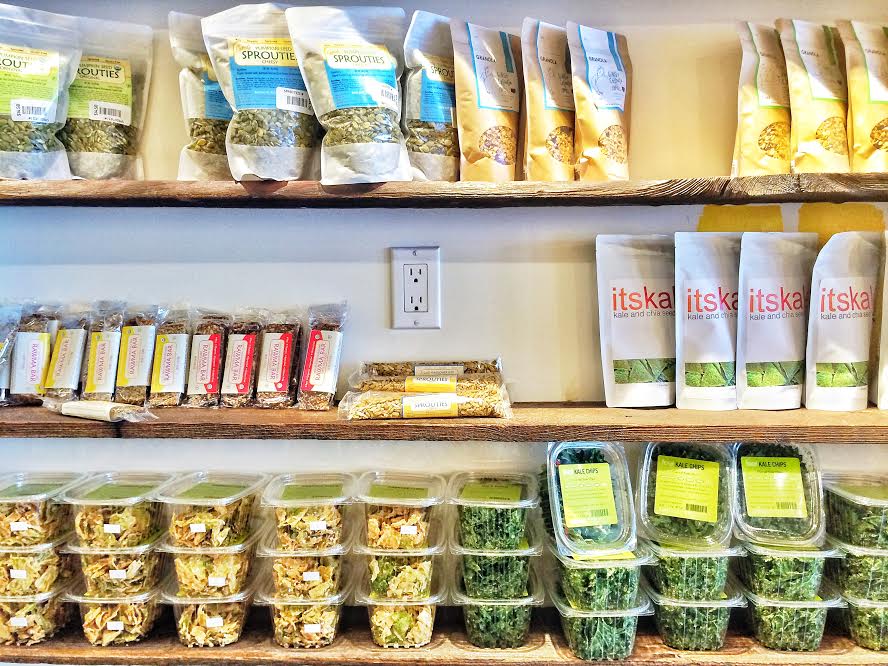 Up front by Feel Food's order counter sits a stock of neatly arranged baked goods like ginger chew cookies and cinnamon raisin rugelach, which are mostly vegan and gluten-free. They're sweetened with organic white sugar, while all raw desserts use coconut sugar, honey, or maple syrup (not raw). They're made onsite daily by Erica Fair, the gluten-free bakeress of Sans Bakery.

About 20 percent of Feel Food's menu changes daily based on seasonal ingredients, but unless sold out one will always find a collard green wrap stuffed with prune chutney, pickled carrots, beets, and cabbage; a Tandoori chicken salad with eggplant, escarole, chickpeas, toasted coconut flakes, and a cashew dressing; and roasted masala carrots with cilantro and pumpkin seeds over yogurt. And while these items are perfect for those looking to pick up a healthy meal on the go, there's also a middle counter where customers can order bespoke salad/veg plates. Try the mixed greens with hummus or romesco, chili broccoli, curry cauliflower, cumin cabbage, and a tamarind-basil dressing. For a protein boost add on coriander and pepper-rubbed grilled chicken which, unlike almost all the salad-dedicated cafes in this city, is never dried out or overcooked. 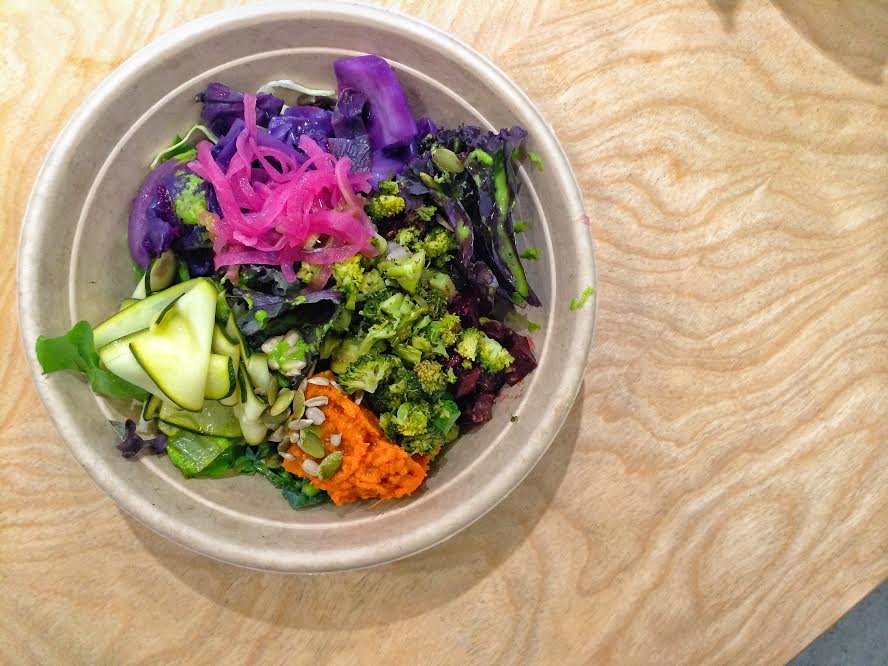 Considering Feel Food's modest size, the cafe encompasses a large rear kitchen. And that's because expansion is in the works. Aciar designed the space to have a cooking area big enough to support other locations. In addition to growing Feel Food's menu with more composed dishes, he's exploring a Feel Food kiosk as his followup effort. Hats off to Aciar for giving Manhattan an approachable, health-conscious eatery that's equal parts delicious and good for you.
· All The Green Scene Coverage [~ENY~]