Welcome to a special Five Days of Meat edition of The Hot Dish, a behind the scenes look at the making of the dishes of the moment. 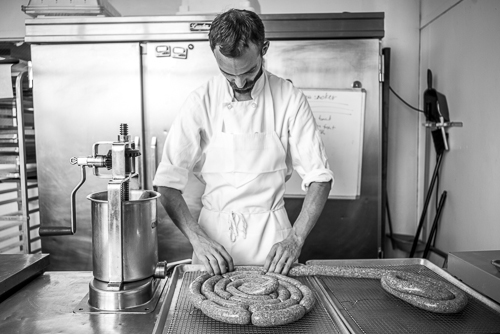 "It's a bitch to do, but it's the right way to do it," says BrisketTown chef Philip Powers as he hand cranks a sausage press, piping out a faithful version of Texas "hot guts" sausage. Using an electric device would turn the sausage into "hot dog meat" says the chef, by hand stuffing he preserves the integrity of the grind, resulting in a coarse, chunky product. The sausage came about because Powers and BrisketTown owner Daniel Delaney needed to do something with all the accumulated trim from the brisket they sell. Since BrisketTown serves central Texas style barbecue, a hot guts sausage was the natural choice.

The sausage is made up of 65 percent lean brisket meat and 35 percent brisket fat. The trim is cut into one inch square cubes, seasoned simply with black pepper, salt, paprika, and garlic powder, and allowed to cure for 24 hours. It is then ground twice before being stuffed into a natural hog casing that will give it a crunchy, snappy exterior when cooked. The sausages are smoked low and slow over white oak for four hours.

Editor markup for Philip Powers' Texas Hot Guts at BrisketTown. This is only visible in the story editor.