Eater's two New York food critics, Robert Sietsema and Ryan Sutton, file full-length restaurant reviews every week. But sometimes, they'll sit down at the same table and debate a noteworthy venue. Today, on the final day of Eater's world-rocking Five Days of Meat, they chat about the only meatery that matters to some: the Michelin-starred Peter Luger Steak House in Williamsburg.

Sietsema: What did you do with the leftovers?

Sutton: I ATE them. In fact I'm drinking hot jasmine tea to remove the layer of fat coating my mouth after few bites of the steak this morning. And the good news is that the meat, at refrigerator temperature, is somehow still amazingly tender. I stuck my face into the leftover pouch like a horse inserts his snout into a feed bag and inhaled.

Sietsema: Even at rare, the fat is perfectly rendered by the cooking process. Although ours was medium rare, right?

Sietsema: I still prefer it right on the premises, where the ambiance can influence the taste.

Sutton: Agreed, but before we get too much into the meat of things. Let's admit that we're coming at this from two different angles. You've been here a lot.

Sietsema: Not as often as I'd like. And you're a Luger virgin, nicht war?

Sutton: Virgin indeed, until our meal there last week. I'd avoided it for so long because I've been to Luger clones, like Wolfgang's, etc, and have had some of the worst meals of my professional career there and at steakhouses in general. But I thought our meal at Luger's was quite lovely!

Sietsema: Me too! Though you noted the tomatoes had recently seen the inside of the refrigerator in our tomato and onion app. The bacon, however, was superb.

Sutton: There are few things I love more than a summer tomato, served at room temperature, with the fruit's natural pectins holding the liquid inside like panna cotta. That's not what you get here. These were cold and mealy even though they were bright and red. I think you said it correctly when you mentioned that this was a fruit pretending to be a steak.

Sietsema: The thing that strikes you about all the apps and sides is their rudimentary nature. What other place serves just a thick slab of bacon unadorned? Not even a sprig of arugula.

Sutton: Or a dusting of parsley for color contrast. It's an appetizer in the a la carte steakhouse format. You almost need a side for your starters! Though to be fair I suppose that side is the pretty respectable bread they send out.

Sietsema: An attractive plainness. You go to Luger to eat plainly but very well. Not a speck of Hollandaise in the place and no brunching allowed.

Sutton: And in a very beautiful dining room. Those wood tables and the smart use of natural light. If you told me I was in an Andrew Tarlow restaurant like Marlow & Sons I'd believe you. 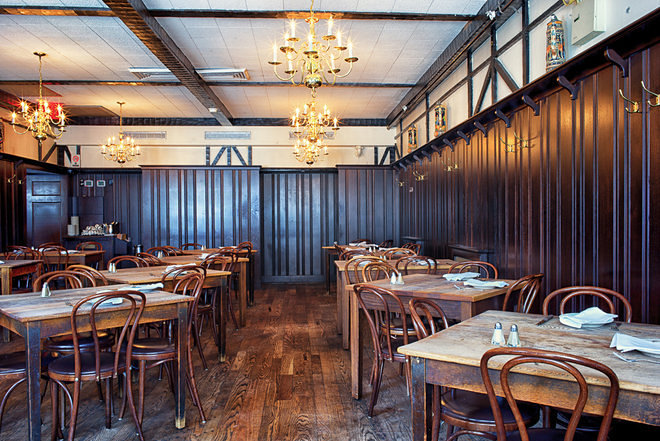 Sietsema: That's funny you say that because in 1968, as part of his rave, Craig Claiborne referred to the interior as "raffish" and "motley." Of the steak he said "there may be none better in New York." It must have been hard for him to drag his ass across the bridge.

Sutton: The old is new again! Funny how the bare-bones nature of Peter Luger seems to fit right in during our nouveau-Brooklyn artisanal era where everything looks like it was made by a bunch of local bearded (but not Amish) carpenters.

Sietsema: Yes, good point. And the stein-bedecked walls fit in nicely with our current brew obsession

Sutton: You believe this is the best steakhouse in the world, non?

Sietsema: For me, Luger's defines great steaks, albeit steaks I cannot afford. I'd go once a week for the hamburger, though. We should tell our audience that Luger serves a prime Porterhouse, and prime represents just 2% of all steaks

Sutton: Your point is spot on about Peter Luger's serving USDA Prime — a phrase touted by so many restaurants that I trust it as much as I trust an male-enhancement infomercial at 2:00am. But boy was this REALLY PRIME at Luger. Actually, strike that, this tasted closer to American Wagyu. The strip was as tender as filet, until I tried the filet. 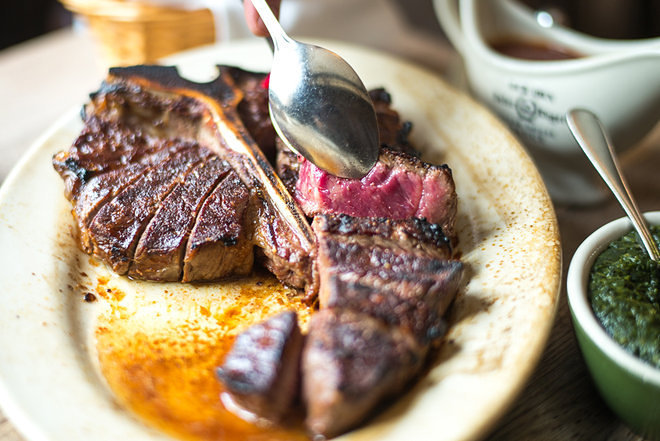 Sietsema: Luger's Porterhouse is the real thing! I usually won't eat a filet, but in this case I make an exception Did you feel like the steak for two, at nearly 100 smackers, was enough for two?

Sutton: Enough indeed! The texture was little firmer than wet tissue paper, with the one-sided char providing nice contrast. Though let's be honest it's nice to have a steak with two-sided char, when seared in a pan and finished in the oven

Sietsema: Eating a steak there is a mystical experience. The way they prop the platter akilter on a saucer, then spoon the buttery juices over it.

Sutton: "For lip shine," one of the Eastern-European accented waiters said.

Sietsema: I like how you scraped the nearly raw flesh off the bone with your fork. It was almost a tartare!

Sutton: Well said. Texturally it was stunning. But let's talk about the flavor.

Sietsema: It was not the best steak I've had there but it was pretty damn good. Don't forget that, like snowflakes, no two steaks are the same. The first bite of the strip side was a little low on funky flavor, but it improved as the steak cooled.

Sutton: YES. And just as no two steaks are the same, no two bites of a large steak are the same.

Sietsema: One corner of the filet was almost high it was so aged. And it had that funk that only Peter Luger can foment.

Sutton: My initial bites, at a hotter temperature, had a very muted flavor, with little minerality. As the steak cooled and I moved up and down the strip, I got very delicate notes of iron and minerality. We might disagree on this issue of dry-aged flavor, which I found to be gentle and entry-level. It didn't have the same varsity football helmet musk as at say Keens or Minetta — with the exception of those few earthy bites at the end, which you correctly described as tasting like ass.

Sietsema: I think Keens is distinctly inferior, though I love the premises.

Sutton: Keens might be inferior, but I enjoy their use of rendered kidney fat, to help impart perfume.

Sietsema: You pay your 100 bucks, you take your chances, at Luger as in life.

Sutton: And that $100 is about market, and a pretty good price I'd argue. 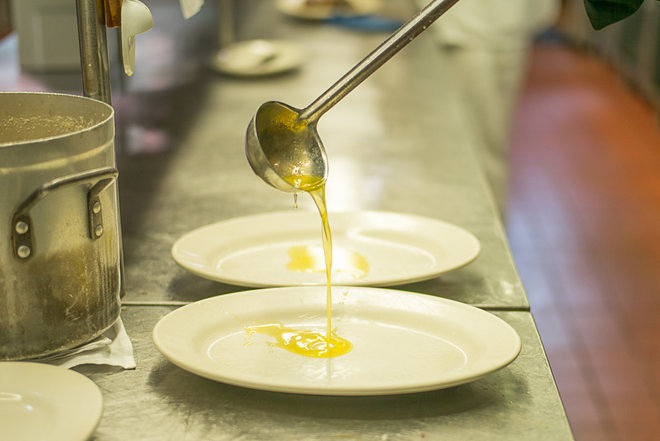 Sietsema: Yes, but that makes the "all-in" price of lunch around 200 dollars, which is a stretch for the unwealthy. Hence the beauty of their burger.

Sutton: Steak is a luxury.

Sietsema: Which was $5 when I first tasted it a decade ago. But yes, Luger is definitely luxe. And that's why people splurge. Luger is worth saving up for and using for special occasions. I hope it's always there.

Sutton: I hope it's always there too. But another comment about the flavor of our steak: it didn't have that same livery sweetness as say the strip at All'Onda or the American-Wagyu strip at Roberta's. And flavor aside, the larger question is, do we want more corn-fed style steaks at Peter Luger's? Or do we want to consume our steaks in restaurants where the staffers are eager to wax poetic about the specific specific high-end butcher and ranch the meat it sourced from, ranches where we know, or hope, the cattle are treated well?

Sietsema: We have no proof of either assertion, though I'm totally in favor of humane treatment of animals. So you're letting flavor take a back seat to provenance?

Sutton: I think that's a false dichotomy. I'll argue that good flavor comes from good provenance, and there is a little bit of power of persuasion in there admittedly — we all seem to enjoy eating things more these days when we think, rightly or wrongly, that animals were well treated. That does impact flavor for some of us. And I'm not alleging any single steakhouse is doing anything wrong; I'm stoked to return to Luger. But in our era of openness, transparency is key, a lesson that a lot of restaurants that serve meat, new and old, would be well-served to remember.

Sietsema: Well include me in that. I'm very concerned about fish, too, and their imminent extinction. And cheer up, Luger may one day soon be replaced by a condo tower with a "green" roof. Serving tough steaks that the farmer tenderly cared for. 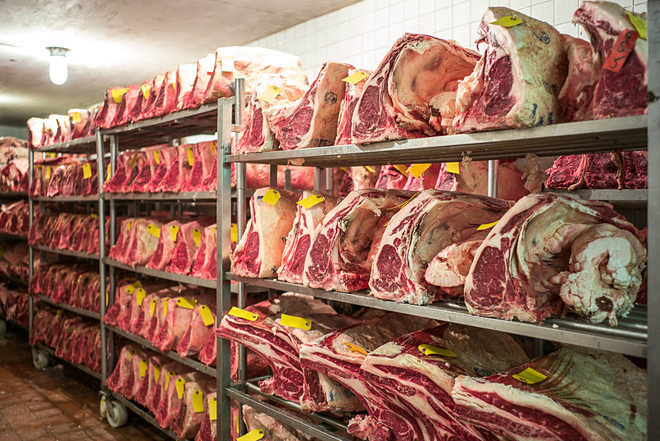 Sutton: Lolz. Fair point! What did you think of dessert? how did that giant cheesecake and bowl of schlag measure up against your past desserts?

Sietsema: The cheesecake was good though I never eat dessert there.

Sietsema: The potatoes were my dessert. Cheesecake is aged just like steak.

Sutton: Right on, and it was nice to eat creamed spinach that tasted like actual spinach.

Sietsema: No cream in there at all! It's a wonderful misnomer Mainly intended as a stool softener.

Sutton: And on the subject of things that help you go poo...that coffee was pretty awful I thought. Thin and watery. Though it was hot and was nice to have the waiter pour us refils without asking. And this is perhaps a good note to end on -- the service.

Sietsema: Yes, you are encouraged to linger. They don't care about turning tables Yes, superb. European. Unpretentious. Steak delivered with a flourish. I like the way they bring the inverted saucer first. It's a figurative drum roll.

Sutton: The service was better than at many modern restaurants. When I first walked in I wanted to egg on the purportedly gruff staffers with silly questions about wine. "Which rosés by the glass would you recommend? White Zinfandel with the porterhouse?" But the waiters were all really cool and they seemed to enjoy what they were doing, almost in that Danny Meyer or Gabe Stulman way. And it was surely quieter than most new restaurants where you're packed in like cattle.

Sietsema: Yes, the hospitality there is long and well-established.

Sutton: I still prefer to get my steaks outside of steakhouses — at places like Minetta Tavern, The Dutch, All'Onda, even Daniel, where I had one of the best slices of beef in my life, and where the appetizers don't suck. But for what it's worth, I think Peter Luger is a reasonably good defense of the steakhouse. And it might be one of the best places in New York to enjoy what truly tastes like USDA Prime.
· All Peter Luger Coverage on Eater New York [~ENY~]
· All Five Days of Meat Coverage on Eater New York [~ENY~]