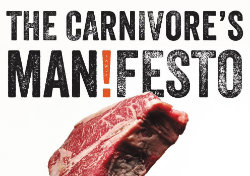 1) Patrick Martins on The Carnivore's Manifesto:
Heritage Radio Network founder and owner of Heritage Foods USA and Heritage Meat Shop in the Essex Market sat in the interview chair to discuss his new book, The Carnivore's Manifesto. Guest host Elizabeth Thacker Jones asked Martins, along with co-author Mike Edison, about the chapter in his book "To Hell with Local, Eat the Best."

Well that actually was called 'Fuck Local, Eat the Best' and I changed it at the eleventh hour…Basically the concept is trust your mouth and not the map…We should always be striving for the best and to be the best of whatever product we buy or support, and that's a really big thing—Is the local food better than the best version, even if the best version comes from Italy or Spain or Nebraska, basically that chapter is saying we should judge things by their taste and let zones that are experts at something be experts. If the best peaches come from Georgia then let them do peaches, they taste so much better than the ones from New Jersey, why should we push that on New Jersey? 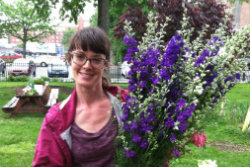 I think of myself as a farmer/teacher. I spend most of my time side by side with beginning farmers, but the income we make through our produce and flower sales accounts for over 35% of our whole budget. 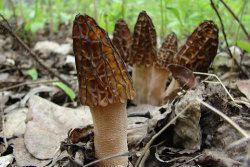 3) More Morel Mushrooms with Eugenia Bone:
Mike Colameco focused his show on two very seasonal foods that folks generally go nuts about: Morel mushrooms and BBQ. Before speaking to the team from NYC's Big Apple BBQ, he spoke with author Eugenia Bone about the elusive fungus:

If you substitute mushrooms for meat in your recipes, you lose weight…the proteins in mushrooms - they fill you up like you're eating a burger, but without all of the calories. 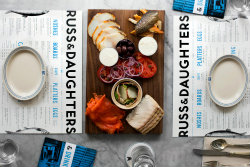 4) Russ & Daughters' Brand Update:
Grace Bonney of After the Jump spoke with Jen Snow, Director of Media and PR and Kelli Anderson, designer and artist at Russ & Daughters about the overall changes to the image and brand of the NYC icon coming with their expansion this year:

We did not want to turn Russ & Daughters into the Epcot version of Russ & Daughters. We wanted to analyze what it was about the place that brought all these people together. 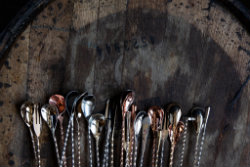 5) The Majesty of Cocktail Kingdom:
Barman Damon Boelte spoke with Ethan Kahn from Cocktail Kingdom about the history and vast reach of the NYC-based storefront and cocktail accessory company.

We're not beholden to anybody so we can really sit there and experiment - stir water for an hour and figure out what it takes to get it to proper temperature.