When Alex Stupak opened Empellon Cocina in the East Village two years ago, he made it clear that his Mexican restaurant would not serve tacos, and to drive the point home he published a 400-word essay explaining why. "We feel that tacos would make our lives too easy, mentally," he wrote. And yet within the year he was selling tacos, just like at his other restaurant, appropriately named Empellon Taqueria. Gotta give the people what they want, right?

Now, after a recent menu change, every main course at Cocina is served with warm flour tortillas. Why? So diners can take their lamb barbacoa or red snapper and make their own gosh darn tacos. That's of course in addition to the selection of six composed tacos still offered. If this were all in the hands of a lesser chef, these "flour wraps" would surely taste as boring as I'm making them sound, but since Stupak is at the helm, they're just the opposite -- often excellent and sometimes outstanding.

In a town where tacos have become as interchangeable, ubiquitous, and uniform as hamburgers and slice pizza, Cocina's are becoming more focused, interesting and envelope-pushing by the month, so much so that it's virtually impossible to mistake them for tacos served at any other restaurant, anywhere in New York. For example: two of the six offerings are vegetarian — sweet pea and asparagus. Instead of traditional pork there's head cheese. Instead of beef there's milanesa. Instead of fish filets there's whole Maine smelt.

Perhaps, on second thought, Stupak isn't necessarily giving the people what they think they want. Nor should he. "The whole point of the restaurant is to change what Mexican restaurants are allowed to be in NYC," Stupak writes via email. "The typical Mexican model in NYC is pork, chicken, beef, vegetarian; seafood usually comes in as a ceviche. There is nothing wrong with that, it's just what is most common. If tacos are what most people order then it's a good way to get people to look at different products that can manifest on them."

Then again, Stupak certainly isn't trying to alienate. When I asked him about the decision to pair his mains with soft flour wraps, he replied, "At the end of the day wrapping something in a tortilla is one of the most sophisticated and texturally gratifying ways to eat. The decision was also based upon how we personally like to balance out a meal...By constructing this section this way it also allows us to deliver better value. The portions are pretty robust." They are. All tacos are $12 for two, or $18 for three. Mains range from $24-$26.

So how do the new tacos taste? Let's find out: 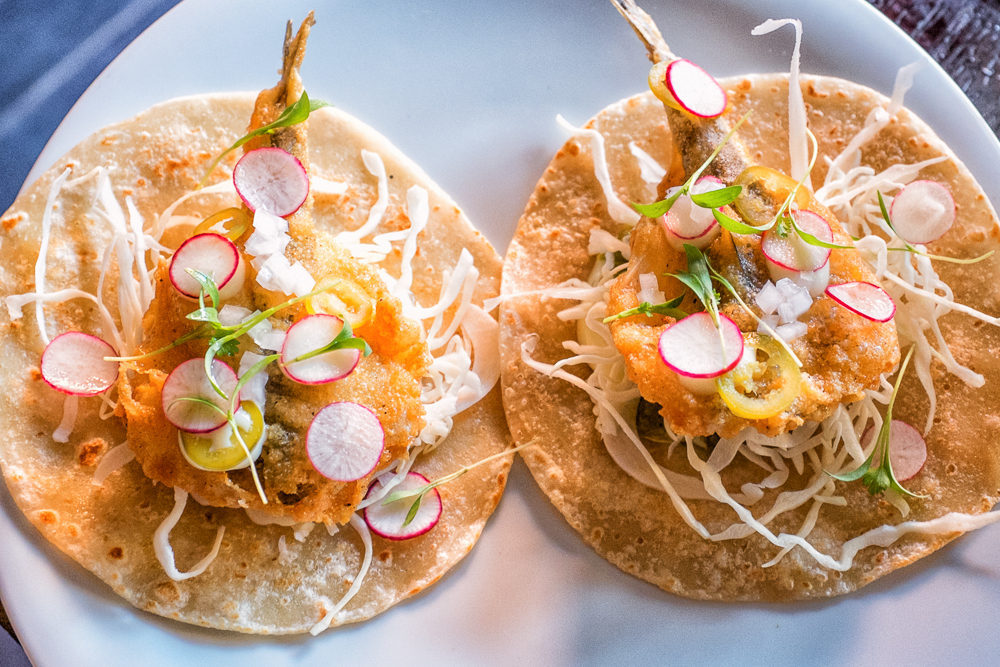 [Fried smelt by Nick Solares]
Fried smelt: This is a dish that would make a Tokyo tempura chef jealous. The Maine smelt occupies a middle ground between flounder and mackerel. It's firm and briny without being intensely oily. And unlike every fish taco you've had before, this one actually has more flavor than parchment paper, a lot more flavor in fact. A jolt of lime mayo smooths out any rough edges and a shock of jalapeno zaps the palate back into shape. Rockin'. Rating: 9/10.

Asparagus: Wrapping a flour tortilla around this king of vegetables is akin to adding whiskey to water: it tempers the main ingredient just enough to make it easier to appreciate, dialing all the woody, piney notes back down to cruising altitude. The addition of almendrado sauce — capers, raisins, allspice, clove, almond — echoes the natural nuttiness of the asparagus and adds a hint of sweetness. Now it's a party. Rating: 9/10. 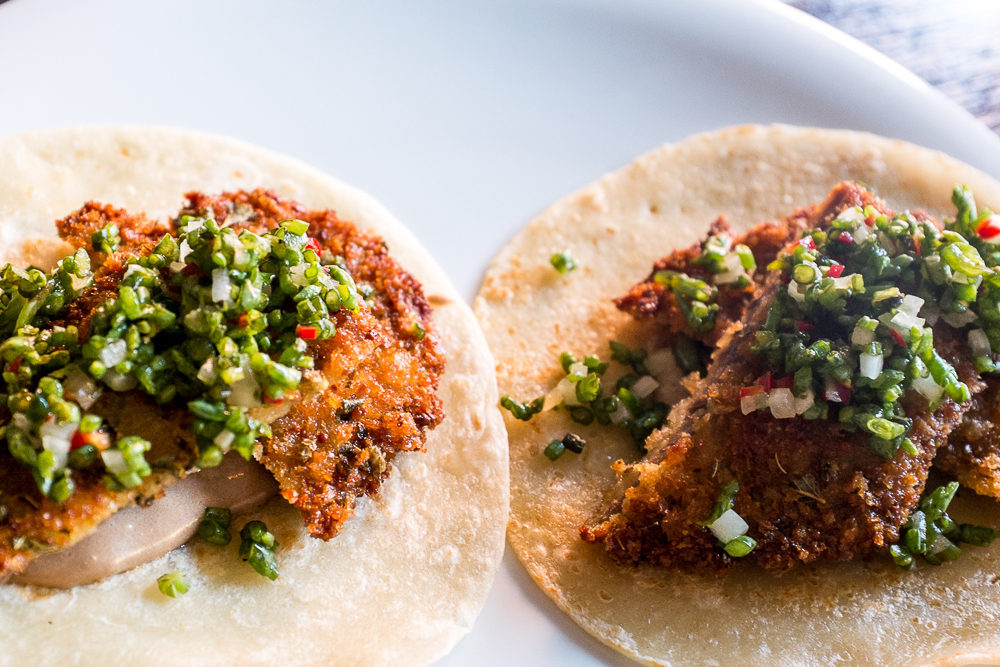 [Milanesa by Nick Solares]
Milanesa: This is essentially the Mexican equivalent of chicken fried steak and has about as much flavor as that Southern dish, which is to say not a whole lot. In other words, it's more about the sauce here — a satisfyingly rich coffee crema and a sea bean salsa that's just a hint too delicate to show off the natural brininess of its namesake vegetable. Still, it's a tasty enough effort. Rating: 7.0/10 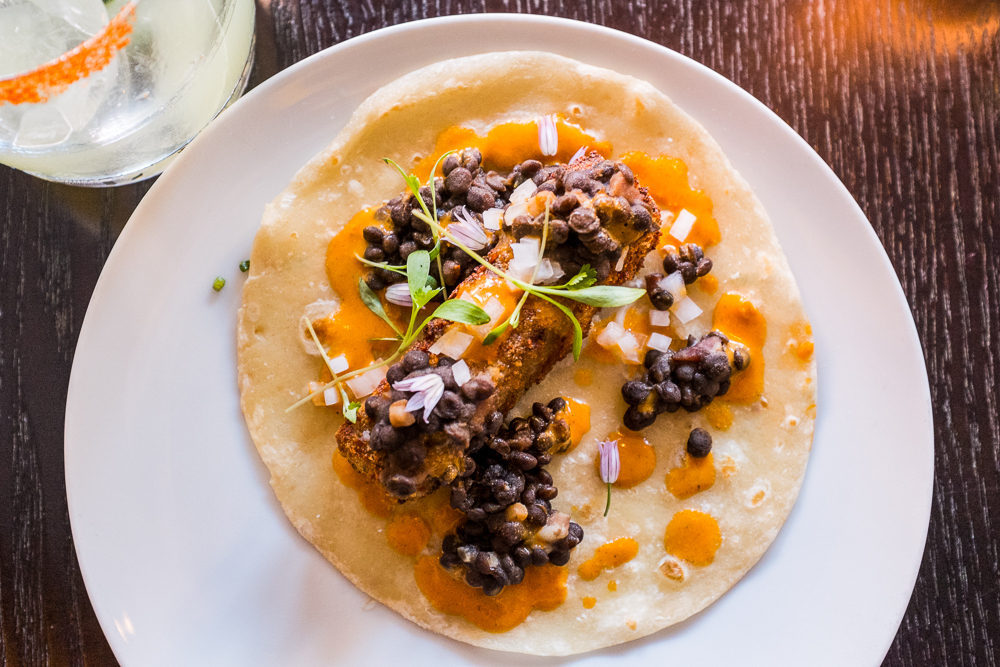 [Head cheese by Nick Solares]
Head cheese: Don't worry it's less scary than it sounds. You're not getting the French-style "pork Jell-O," but rather a fried slab of pig's face, with just enough fat to keep things moist, and just enough musk to let you know you're eating swine. The crispy testa plays well against the refried lentils. Good stuff. Rating: 8.0/10.

Fried chicken: So here we have all the elements of a buffalo wing in a taco, which sounds positively terrible, but it's not. The confit bird (a bit dry) sports a clean poultry funk; celery leaves add a hint of bitterness, the salsa macha isn't quite Frank's Red Hot but it packs enough acid and heat to get the point across. And of course, there are little gobs of blue cheese. I'm usually suspicious of such Frankenfoods but this one delivers all the flavor of the original and then some. Rating: 9.0/10 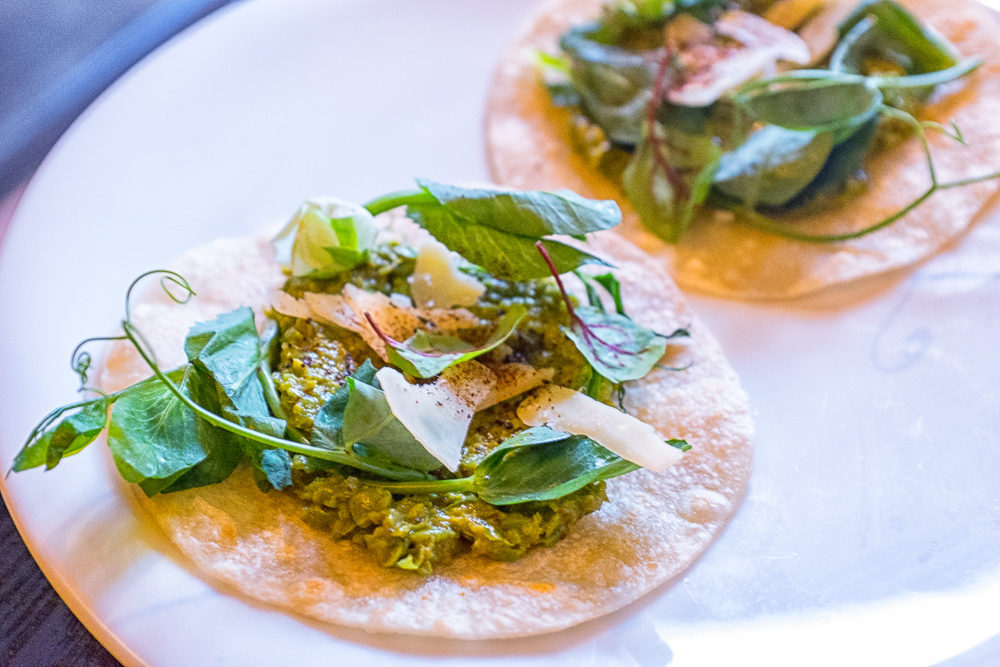 [Spring pea by Nick Solares]
Spring pea: It's what meat wishes it could taste like when it grows up. Stupak spreads a layer of mashed peas and parmesan on a tortilla and the application is judicious; there's nary more filling than there is schmear on a bagel. The curly pea shoots hit you first with their sweet, vegetal punch. Then you get the rich, round flavor peas and cheese, with the natural sugars giving as restrained a performance as Bill Murray in Lost in Translation, and the parmesan doing its best impression of MSG. Pasilla Oaxaqueno adds just a whisper of heat. Empellon is a casual restaurant, but this taco wouldn't be out of place at David Kinch's two-Michelin-starred Manresa in California. It is a perfect dish. Rating: 10/10. 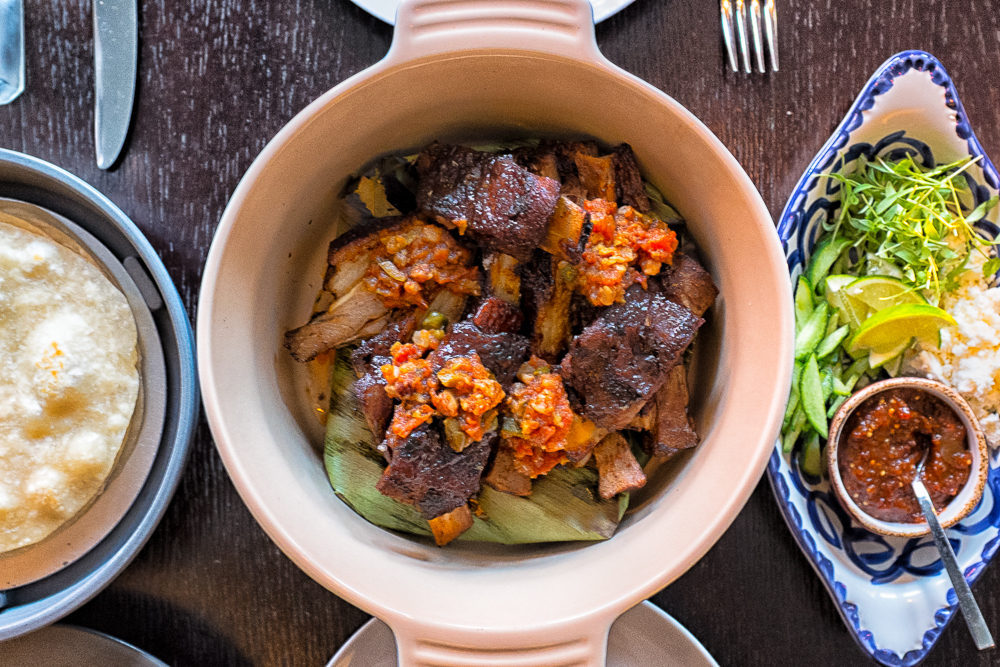 [Lamb barbacoa by Nick Solares]
Lamb Barbacoa: Here's your main course for $36, essentially a super-sized version of Stupak's famous lamb tacos. The chef takes the belly and ribs, rubs them in adobo, buries them in avocado leaves, and cooks them low and slow. The fat is silky and perfectly rendered while the meat sports a sweet, gamey tang. Take the lamb, wrap it up in a hot flour tortilla, and garnish the affair with a few crumbs of queso fresco, cilantro, and smoky salsa borracha. There's your world class version of a sizzling fajita platter at Chili's. Rating: 9.5/10.

It's all quite risky, which is precisely what we want in this conservative year for new restaurants, but let's be real about things: wouldn't it have been easier for Stupak to have put his wildly popular pastrami tacos back on the menu at Cocina? "Yes, It would make even more sense to shut down Cocina and reopen it as Taqueria," he replied. "We have the data and we know it would make us more successful. At least financially it would. In terms of accomplishing what I set out to do with that particular restaurant it would be a failure."