Share All sharing options for: Big Apple Barbecue Block Party 2014: What to Eat


[All photographs by Nick Solares]

The 12th annual Big Apple Barbecue Block Party (BABBP) rolls into town this coming weekend, bringing pitmasters and barbecue styles from across the nation to Manhattan. Started way back in 2002 by Danny Meyer and erstwhile Blue Smoke pitmaster Kenny Callaghan, the event has had a seminal impact on barbecue in the city, giving many New Yorkers their first taste of authentic barbecue. This year the lineup includes pitmasters from eight states as well as an unprecedented number of local participants. 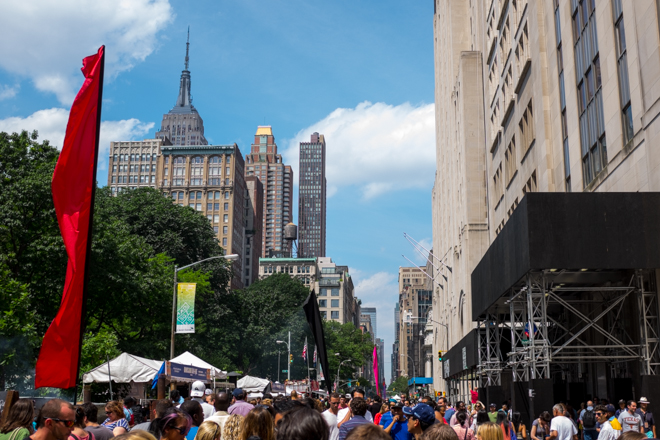 The 2014 BABBP is on June 7 and 8 from 11 a.m. until 6 p.m. It takes place in and around Madison Square Park. The main concourse of the event runs up Madison Avenue from 23rd Street to 27th Street and along 26th Street between Madison and Fifth avenues. These streets are closed off to vehicles. The event is free to attend, and food is sold for $9 per plate and typically contains a portion of meat or a meat sandwich and a side item or two. Dessert and beverages, including alcohol within designated areas, are also available. Note that the event is cash only. There are seminars and live bands which are also part the BABBP — these are hosted inside Madison Square Park. The pit layout hasn't been announced yet so lookout for the official BABBP map that will be in plentiful supply through out the event. 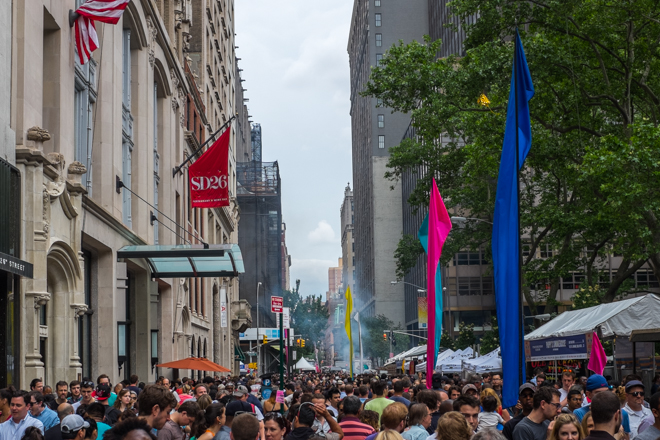 The individual pits line the streets sitting just outside the sidewalk and facing away from the park. The street itself is where most attendees line up for the barbecue, with large colored flags demarking the end of the line. Be warned that with an estimated 125,000 visitors over the course of the weekend, lines can get rather long, especially for some of the more popular pits. Which is why you might want to invest in a VIP pass (see additional info at the bottom of this post).

One of the defining aspects of the BABBP is that it brings various regional styles to NYC. Here are the different forms represented at this year's event. If you're going, you should try at least one type of each of these: 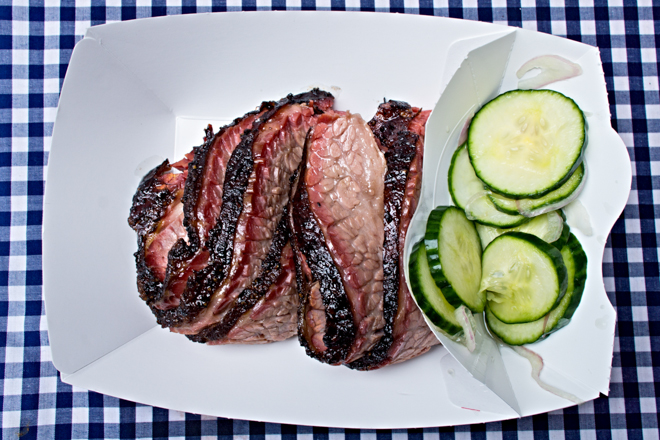 [Hill Country Barbecue brisket]
Beef is king in Texas and the style of barbecue principally focuses on beef brisket and sausage. Sauce is not a significant factor in Texas barbecue (although it does exists there). The meat is generally rubbed with only salt and pepper and smoked over post oak wood. It is one of the most primal forms of barbecue. Texas is particularly well represented at the BABBP, although ironically not necessarily by pits that are actually from Texas. Baker's Ribs from Dallas defies stereotype and serves St. Louis style pork ribs and while the Salt Lick does serve Texas brisket and sausage, the results in recent years have not been stellar. NYC newcomers BrisketTown and Hometown Bar-B-QUE will both be serving Texas style barbecue, joining Hill Country who has traditionally served the best example of the style at past events. 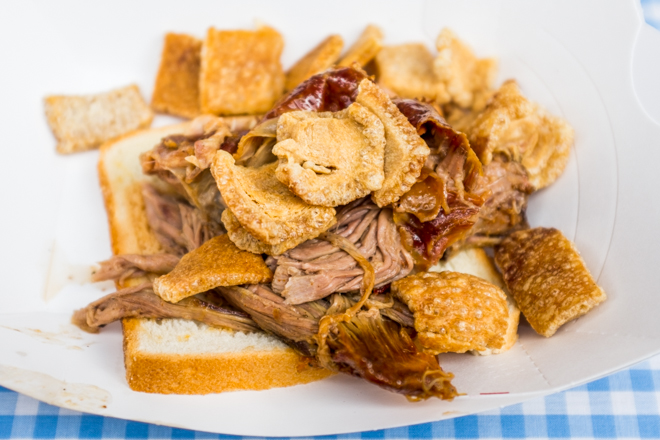 Within North Carolina there are two distinct styles of barbecue. In the Eastern part of the state whole hog barbecue dominates. Hogs are smoked whole and then the entire carcass is chopped and mixed with a blend of vinegar, pepper flakes, and other spices. This style is well represented at this year's event with Sam Jones of the Skylight Inn and Ed Mitchell both serving up whole hogs. The other style found in NC is called Lexington or Western Lexington style and revolves around pork shoulder. It is not represented at the BABBP. 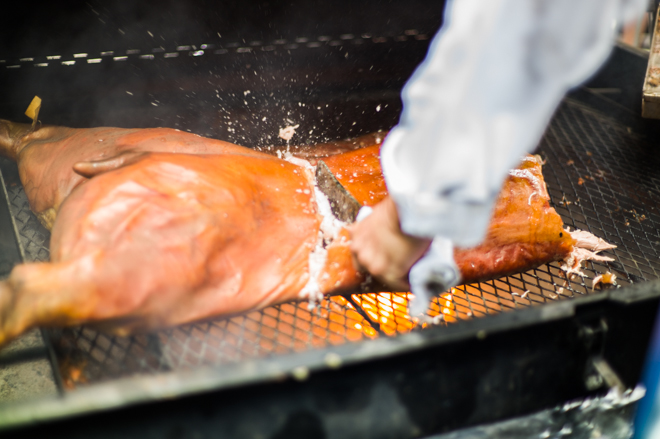 [A whole hog]
As in NC, pork is king in South Carolina and whole hog is popular. Rather than the vinegar based sauce of their northern neighbor however South Carolinians douse their swine in a mustard based sauce, earning the state the "mustard belt" moniker. Scott's Bar-B-Que and BlackJack Barbecue represent the style at this years BABBP. 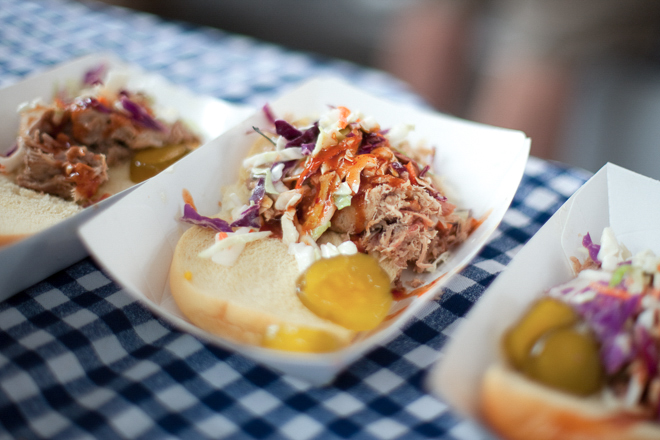 As in much of the south, pork is the most popular meat in Tennessee barbecue. Memphis is known for ribs above any other cut. Despite hailing from St. Louis, MO, Pappy's Smoke House unabashedly bills itself as Memphis style barbecue as does the Memphis Smokehouse, which hails from Horn Lake, MS. Both will be serving Memphis style ribs this year. The more rural areas to the east of Memphis tend to focus more on whole hog barbecue and this style is expressed by long time BABBP participant Martin's Bar-B-Cue Jointfrom Nashville. 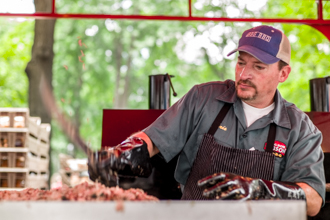 Although not a popularly recognized form, one could argue that a style can indeed be defined by a single establishment, at least when Chris Lilly is your pitmaster (see below). Big Bob Gibson's dates back to 1925 and is renowned for creating the mayonnaise based white barbecue sauce and serving pulled pork.

With 17 pits at the event you will have a lot of ground to cover if you want to hit each spot. At $9 per portion you are looking at spending $153 to sample everything, not including beverages. It probably helps to break up the feat over the course of two days, although unfortunately the Fast Passes are not transferable. Alternatively, you can enlist some friends to line up at different pits simultaneously. If your appetite isn't quite that ambitious and you want to refine your list here are the three must-try pits: 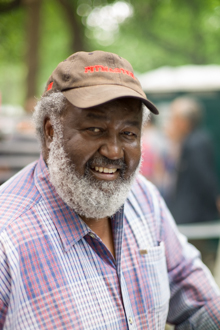 Famed pitmaster Ed Mitchell cooks North Carolina style whole hog using a 150-year-old method that has been passed down through the generations. Mitchell was one of the founding pitmasters at the inaugural BABBP and rose to national prominence when his barbecue was named the most authentic by the Southern Foodways Alliance. He has also forged strong links to the sustainability movement and has started raising his own naturally reared hogs specifically for barbecue, drawing the attention of Michael Polan. This year he will be debuting whole, all-natural turkey along with his usual whole hog offering. This is probably the most popular pit and despite cooking whole animals it usually sells out. Get there early! 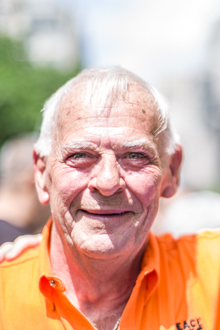 Mike Mills is a legend in competitive barbecue with a career dating back to the 1990s. He has four World Championships and three Grand World Championships at the celebrated Memphis in May barbecue competition under his belt. Mills currently runs five barbecue restaurants across the nation and was a founding partner in Blue Smoke NYC. Mills's daughter, Amy Mills, is a barbecue celebrity in her own right having co-authored Peace Love and Barbecue with her father, and she also helps run their barbecue empire. Mills is cooking his world famous baby back ribs this year. 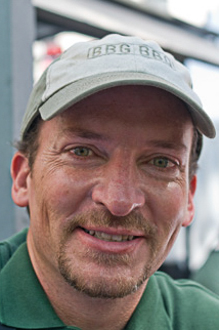 Chris Lilly is one of the most decorated pitmasters in competitive barbecue, as well as being an author and TV personality. He is vice president, executive chef, and partner of Big Bob Gibson Bar-B-Q, the legendary restaurant that dates back to 1925. Lilly hasn't been there quite that long but he has worked there for 20 years. He has been a regular participant at the BABBP serving pulled pork shoulder which he can often be seen chopping by hand for the crowd. 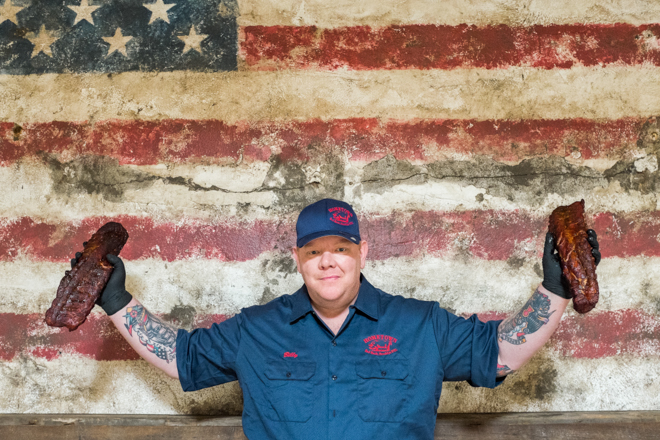 The local lineup has never been stronger with both BrisketTown and HomeTown Bar-B-Que being announced just last week to an already strong lineup (Eater recently ranked both as the first and third best brisket in the city respectively). They join longtime attendees Blue Smoke, Dinosaurm and Hill Country Barbecue. While it may seem redundant to have local pits represented — after all you can and should be visiting these establishments on a regular basis if you live here — it is actually vital to development of a unique barbecue culture, something that seemed unimaginable before the BABBP.

Here is the complete list of pitmasters for the BABBP 2014:

Getting There
If you are driving you should know that parking can be scarce in the immediate vicinity of the park. Madison Avenue and the cross streets running from 23rd through 26th street and Park Avenue are closed. However, Madison Square Park is well served by subway, with the 4,5,6,N,R trains all close by and the 1,2,3, A,B,C lines only a short walk away.

The Elements
The event is held entirely outdoors and there is not a lot of shade outside of the park, so bringing a hat or an umbrella is advisable. While there are beverages available for purchase bringing your own water bottle is the best way of remaining hydrated, especially as the lines can be daunting in length. If you plan on consuming alcohol make sure to bring proper ID, and be sure to keep all booze in the designated areas. NYC laws apply throughout the event. Also, wet wipes and antacid will come in handy.

VIP Passes
To really get the most out the BABBP, and especially if it is your first time, you should purchase either a Fast Pass ($125) or for the more well heeled the BigPiggin' VIP Pass ($265). These allow you access to the sidewalk behind the pits which are shaded by trees and have convenient toilet facilities, including wash basins. The lines here can still be long, but nowhere near as long as on the other side of the pits. Both passes give you $100 in food credit and you can use cash to purchase additional items. The BigPiggin' VIP Pass comes with all sorts of superfluous niceties like access to hospitality tents and a wine bar. Frankly, it is hard to recommend this as it doesn't get you any more barbecue, and you are better off spending the extra money over and above the price of the Fast Pass on direct food purchases. On the other hand, it is important to remember that the event is a charity benefiting the Madison Square Park Conservatory.

· All Coverage of The Big Apple Barbecue Block Party [~ENY~]