He isn't very far into American Fried, the first volume of his Tummy Trilogy, before Calvin Trillin mentions Russ & Daughters. He happens to be tailing madcap actor and comedian Zero Mostel on the sort of Lower East Side food crawl that the New Yorker writer would later become famous for, and describes a luscious lox and sturgeon sandwich made by proprietor Herbie Federman. The subsequent chapter tells how Sunday mornings, Trillin is in the habit of going to Russ & Daughters to buy Nova Scotia lox, while also getting homemade scallion cream cheese from Ben's Dairy and pumpernickel bagels from Tannebaum's, then putting it all together for the most sublime DIY brunch imaginable. Sadly, Ben's and Tannenbaum's are long gone, making the pleasures of weekend foraging along Houston Street almost a thing of the past. 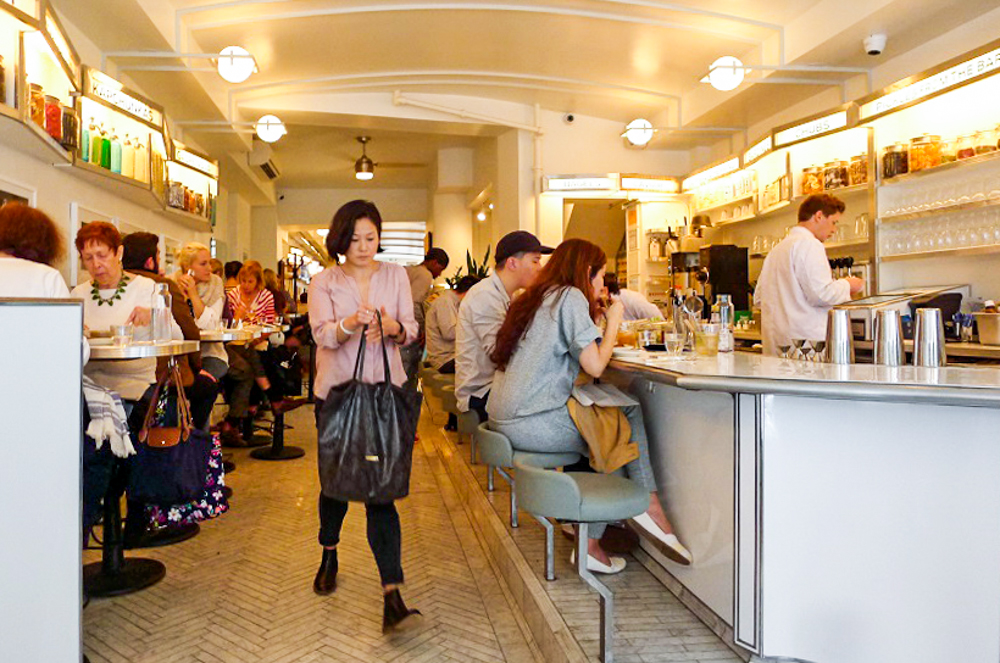 Now, of course, you could just go to the new Russ & Daughters Café on Orchard Street and have the delicacies brought to you already assembled. Trying to beat the crowds three weeks after the opening, I went around 3 o'clock in the afternoon for a late lunch, and was lucky enough to persuade Calvin Trillin to join me. I wanted to get the perspective of the World's Greatest Authority on Russ & Daughters on the new joint. He showed up in a blue Russ & Daughters baseball cap with a fish on it. 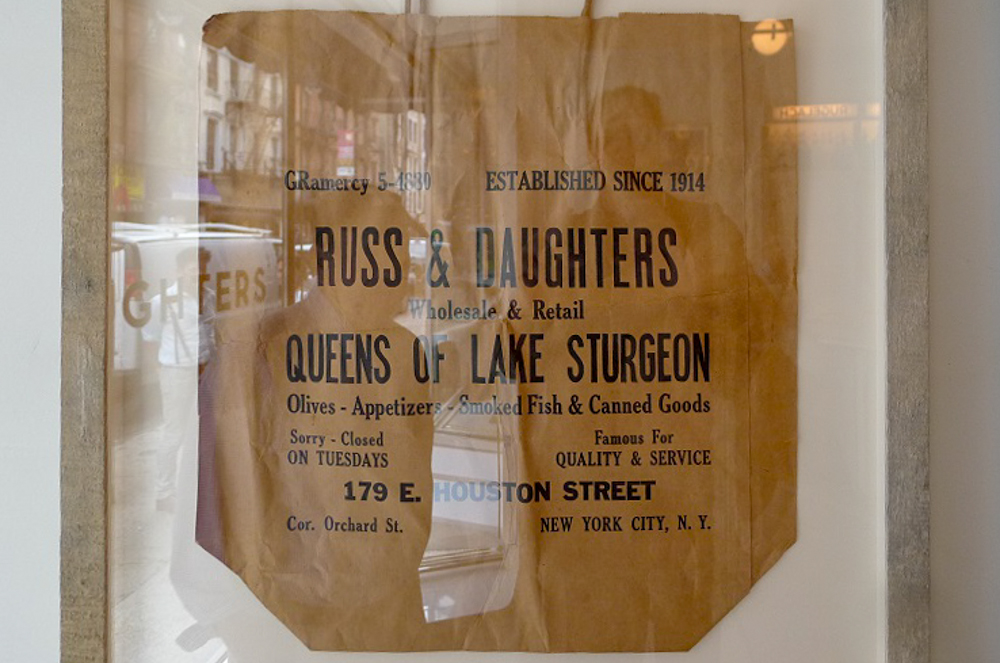 At the new café Trillin counts as a sort of reigning saint. Just inside the front door in a glass case there's a relic from the original shop circa the late 60s, a brown paper sack with the kind of brass plaque underneath usually reserved for fancy art galleries. The bag boasts "Queens of Lake Sturgeon," and it's attributed to the collection of Calvin Trillin. He pointed to it as we entered: "I found this after rustling through my shopping bag collection," implying that every West Villager has an assortment of historic sacks stashed in a closet somewhere that he indexes as carefully as a museum curator.

We then made our way in a stately procession past a white podium and into a space suffused with indirect light, with something on our right that looked like a soda fountain, but was also a bar. Up above inscribed in sans-serif on a series of back-lit panels were house specialties — and mainstays of Lower East Side Jewish cuisine — that included chubs, pickles, babka, smoked whitefish, sardines, caviar, bialys, and bagels. Attendants stood around the room in spotless white shop coats surrounded by antique black-and-white photos of the Russ & Daughters store, which recently celebrated its 100th anniversary. One couldn't help but be struck by the impression that, apart from the fussy lighting scheme and modern shades of paint, a time machine might have transported you back a century, so thoughtfully detailed were the premises. 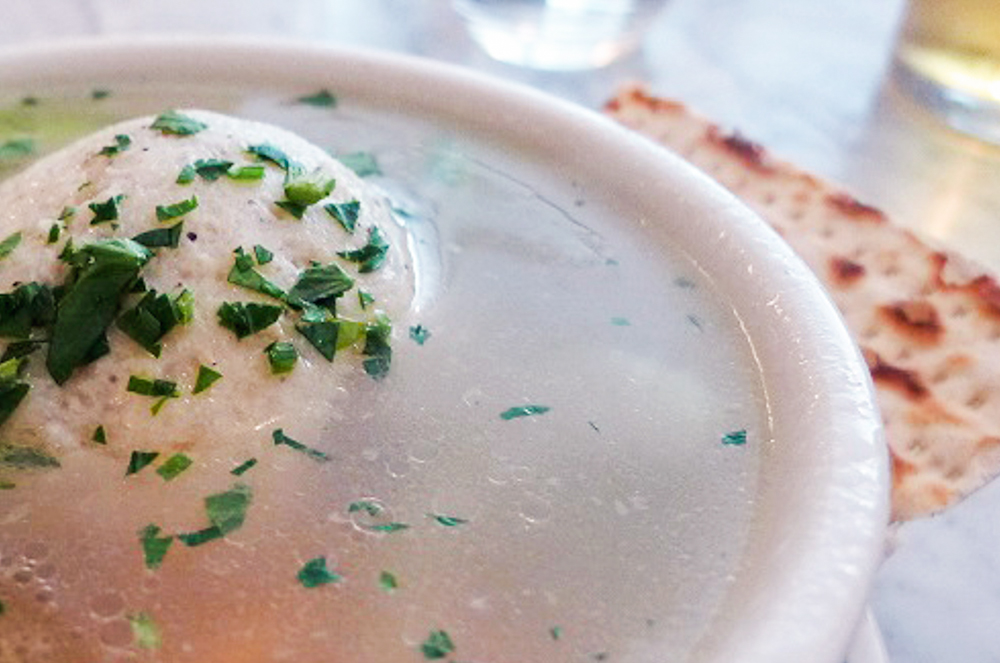 After admiring a guy who, knife slashing and glinting, sliced Nova like he was on Broadway doing a one-man show, we were seated in the rear room at a fawn-gray booth. As he ran his eye over the bill of fare, Trillin observed, "the menu is partly Jewish dairy restaurant, partly appetizing store." As luck would have it, the bowl of matzo ball soup? ($8) was one of the first things to arrive, featuring a good quantity of light and dark meat. "This isn't like my mother's," Trillin said, poking at the big soft matzo ball and spooning up the amber broth, upon which little droplets of pure schmaltz danced. "My sister and I used to joke that hers were so hard you could play jacks with them." The recipe was clearly owing to somebody's mom, because the soup was a classic version that hadn't been doctored for the purposes of menu modernity. 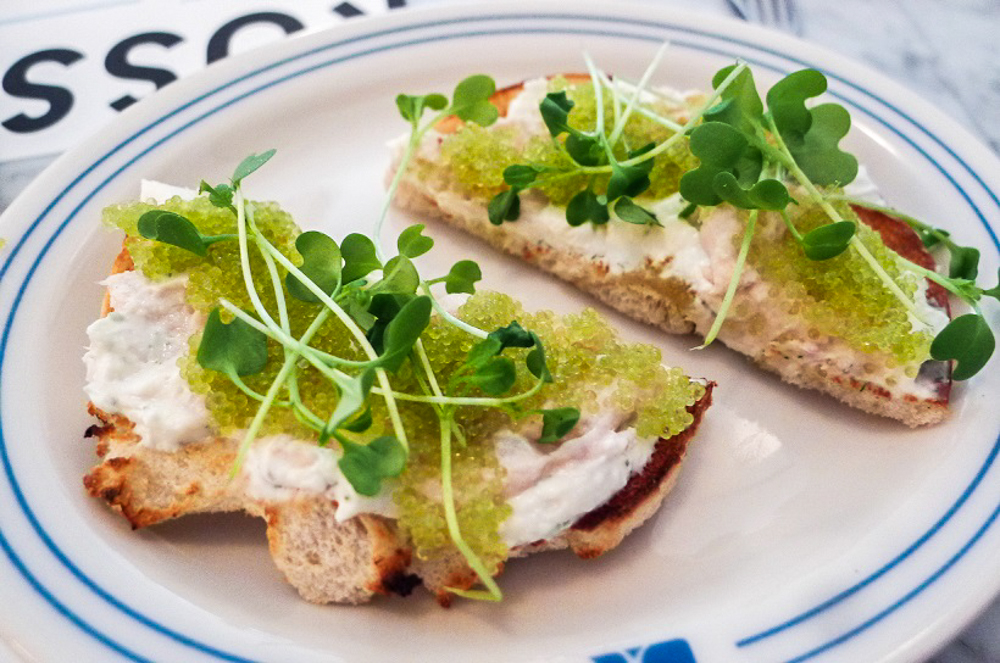 There were newfangled things on the menu, too, including the super heebster ($10), a pair of open-faced toasts with cream cheese and fish salad surmounted by a cascade of fluorescent roe tinted green with wasabi. There were sprouts on the top, too, something which had probably never crossed the threshold of a traditional Jewish café before. Unavoidably, we reminisced about the neighborhood's old dairy restaurants, now kaput, including Ratner's, a hulking cave of a place that had been around the corner on Delancey Street, where old schmatta salesmen once sat in the afternoon spooning up bowls of pure sour cream. 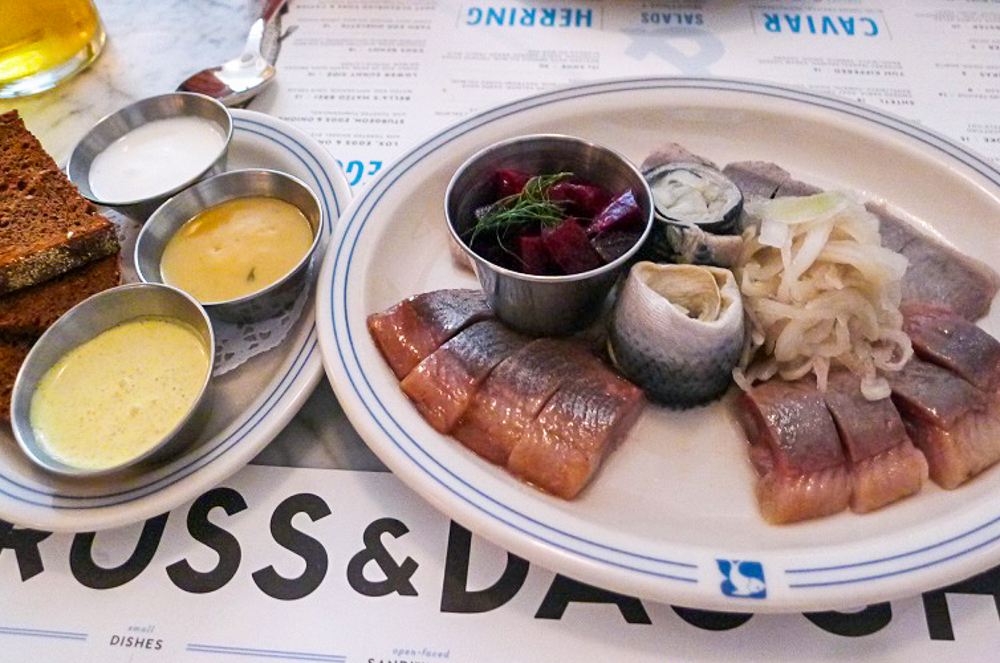 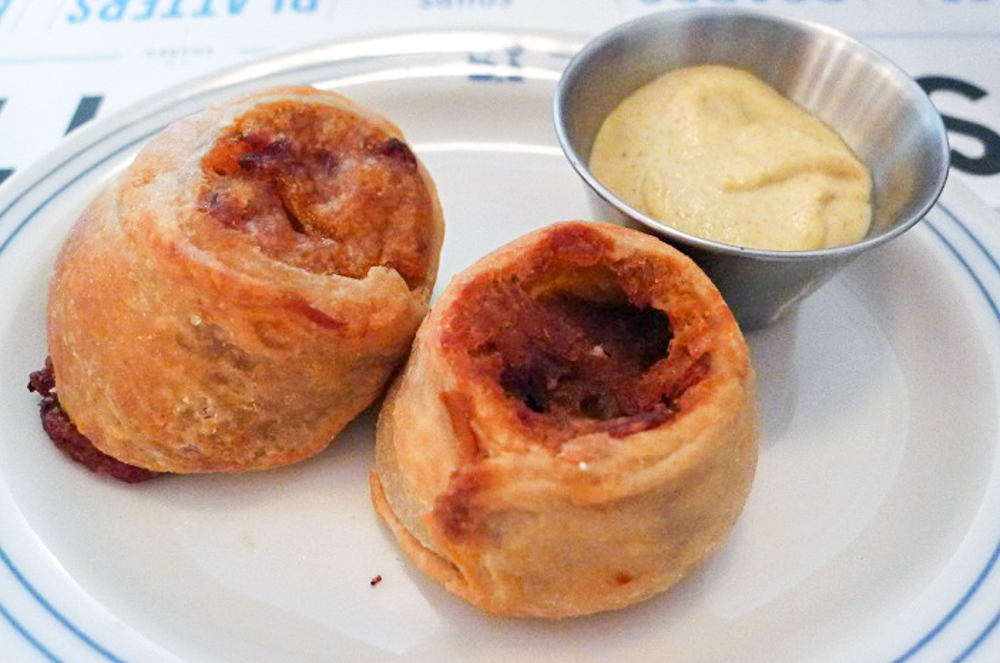 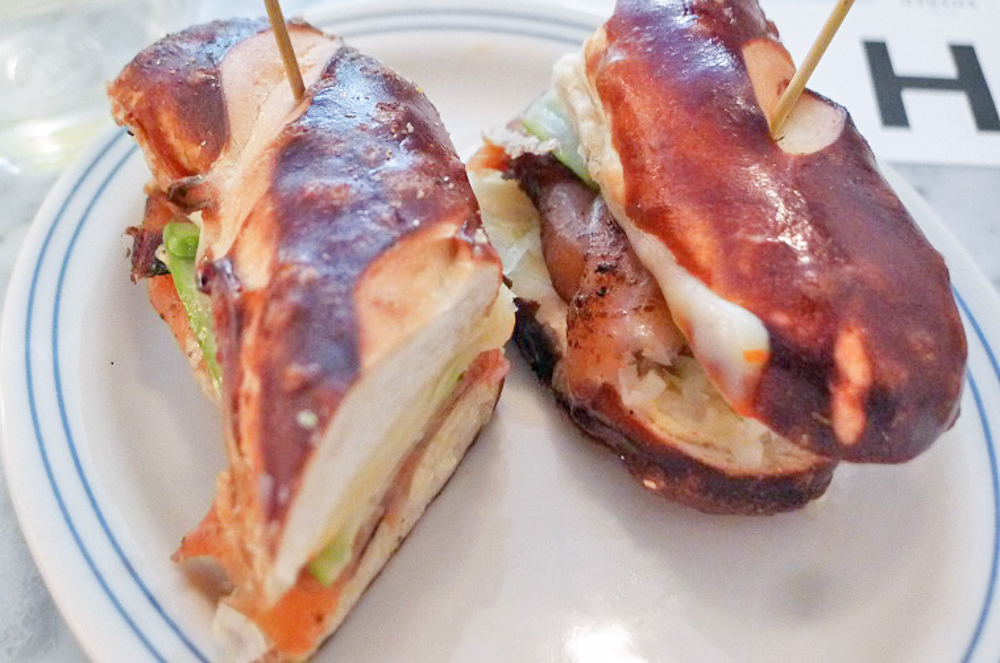 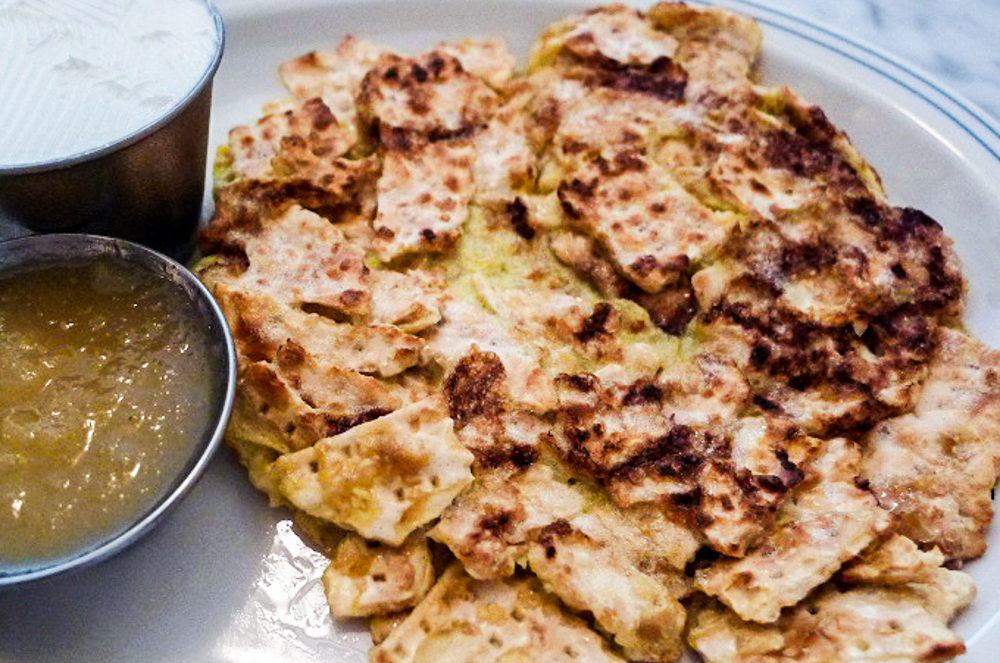 Trillin seemed to take particular pleasure in the herring platter ($20), which included three different types of pickled herring, with rollmops in the middle, served with three contrasting sauces. He also liked the tiny potato knishes, which seemed pointedly different from those of another remaining Lower East Side stalwart, Yonah Schimmel's. My favorite was the sandwich of salmon cured as if it were pastrami, deposited on a pretzel roll with muenster cheese and sauerkraut. Neither of us much liked the matzo brei, which was a heap of crushed crackers barely moistened with scrambled eggs. "We never had this in Kansas City," Trillin observed. "Maybe it's an exclusive New York thing," I replied.

For most of the meal, Trillin's presence in the restaurant had gone unobserved. But as we were finishing up the last rollmop, Niki Russ Federman, great granddaughter of the Russ & Daughters founder, and co-owner of the present café, bounded up and warmly greeted us. We told her we'd already eaten, but she sent over a couple of things she wanted us to try. One was a carob egg cream. "In the old store when I was a little girl, there used to be a barrel of bokser," she smiled, using the Yiddish word for carob. "The old men would sit around the back of the store, and occasionally one of them would grab a handful of the pods and chew like it was gum. So we decided to make an egg cream out of it." 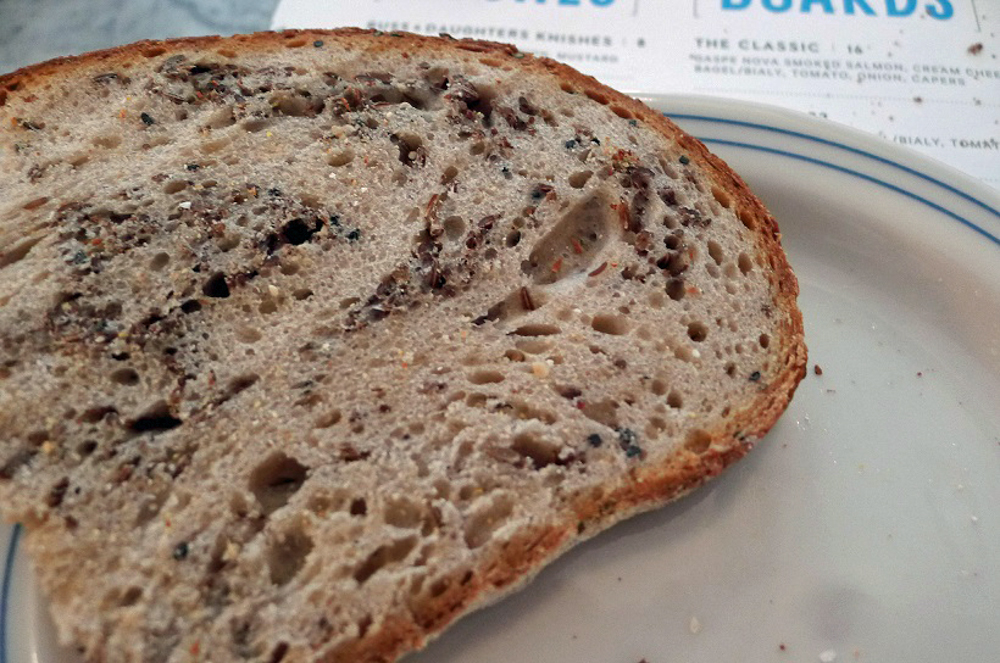 She also sent over a couple of slices of shissel rye, now made in Queens by baker Gordie Weissman. Originally from a Bronx baking family, he was working in Springfield, Massachusetts before Federman and her cousin and co-owner

I paid our bill and we were soon out the door, headed for the Delancey Street M stop.