Reviews for The Simone, The Gander, Talde, and More

Share All sharing options for: Reviews for The Simone, The Gander, Talde, and More 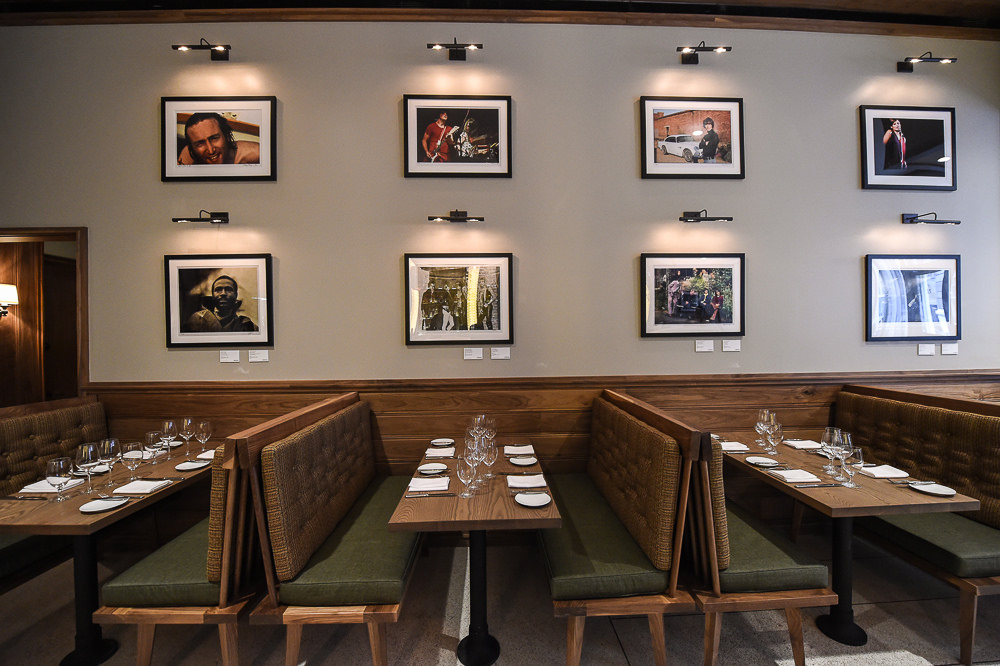 Pete Wells is totally enamored with The Simone, a nearly unknown 11-table restaurant on the Upper East Side from chef Chip Smith. On the flounder: "The fish is a favorite of Mr. Smith's, who served me two flounder dishes that rank among the best seafood I've tasted this year. In late winter, he rolled juicy, big-flaked fillets around a mousse of flounder and black truffle flecks; I would have burrowed into it until spring if I hadn't also wanted to eat the whole thing. The flounder's cold-weather swaddling disappeared a few weeks ago, and a jaunty new May outfit appeared: a golden sheet of bread crumbs speckled with fresh green herbs on top of the fish, a platform of crushed, minted favas below." Three stars. [NYT]

Voice critic Zachary Feldman visits Jesse Schenker's new casual Flatiron restaurant, The Gander: "Exceptionally rendered duck breast is cleaved in half and served with mushy butter leeks and fig and almond purées. Between the nutty and fruit elements in the dish and the rosy duck meat and its brittle, crisp skin, it's one of the better duck dishes I've tried this year...but it was a $20 mushroom that caused a feverish plate-grab. Creamy as firm tofu but far mustier, the roasted white elf mushroom gets a sherry broth poured tableside." [VV] 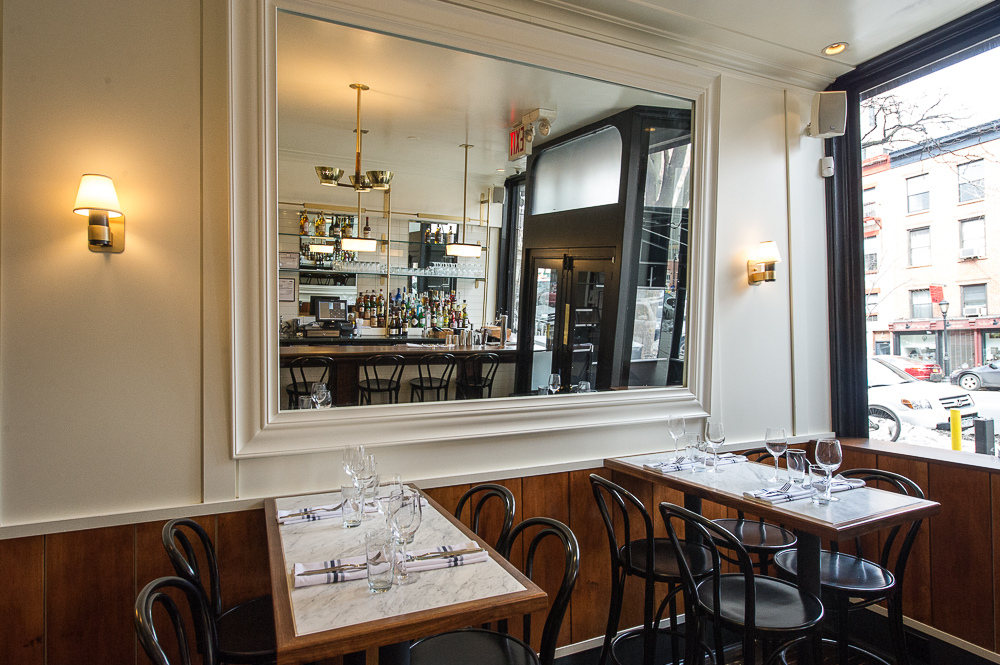 [French Louie by Krieger]
Steve Cuozzo is mostly charmed by Doug Crowell and Ryan Angulo's Atlantic Avenue restaurant, French Louie: "Skate arrived moist after being dredged in cornmeal and rice flour. Crab and butter were folded into jasmine rice in a pool beneath the skate — a Southern "dirty rice" riff that tasted right at home with the ray. Flounder Grenobloise looked messy but tasted like a dream, its brown butter depth parried by restrained blood orange." Two stars. [NYP] 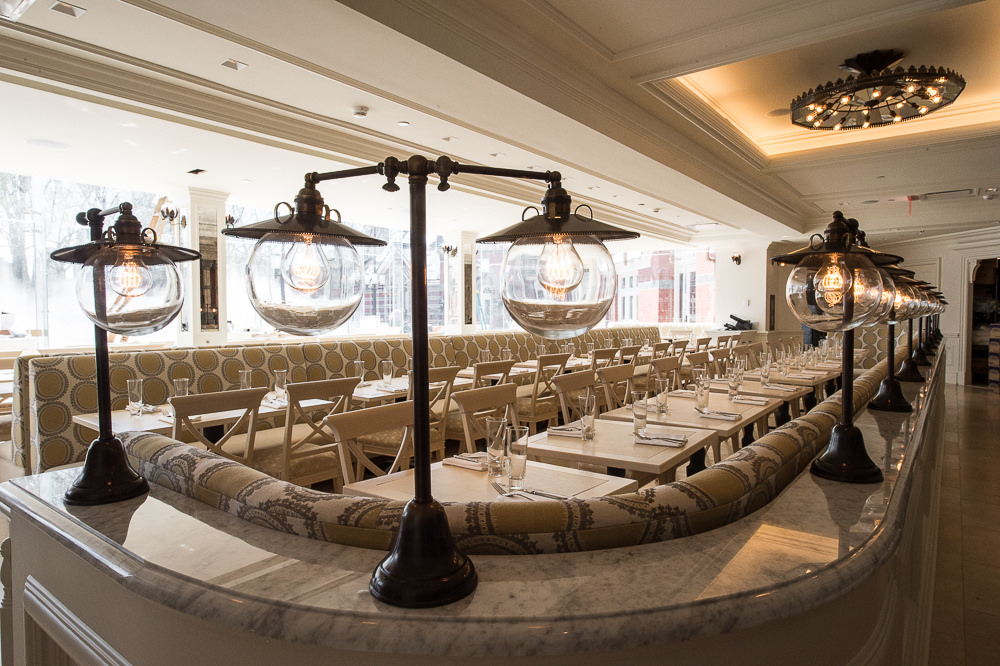 [Tavern on the Green by Krieger]
THE ELSEWHERE: Hannah Goldfield finds the revamped Tavern on the Green to be overpriced with a "theme-park overtone." Ligaya Mishan loves the unique Sri Lankan dishes at Spicy Lanka. And Gael Greene spends an evening at North River Lobster Company, a floating lobster shack on the Hudson. 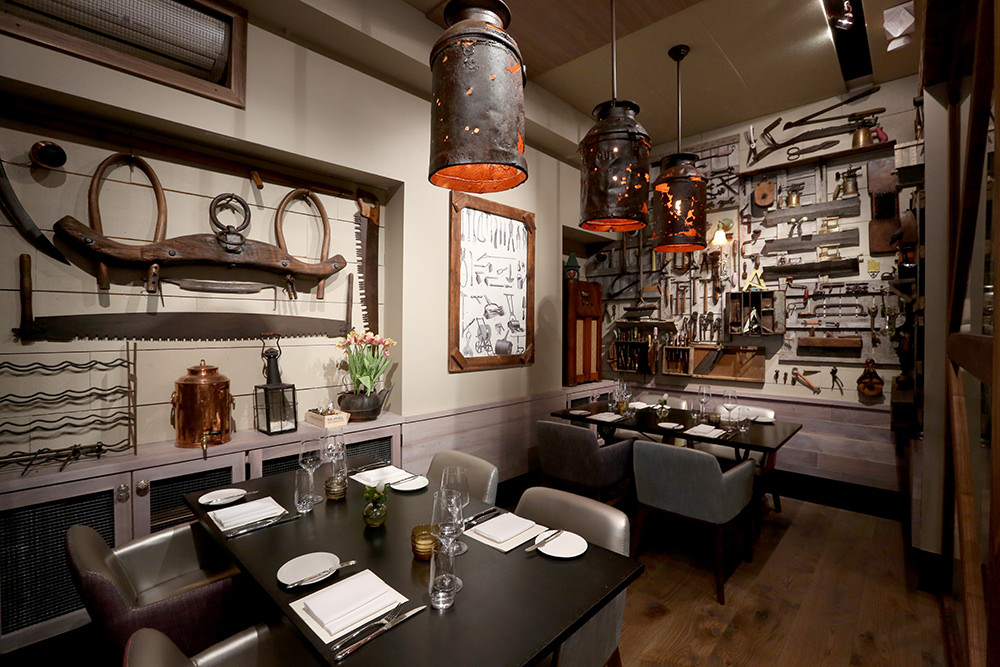 [Blenheim by Bess Adler]
THE BLOGS: The Infatuation's Andrew Steinthal gives an 8.0 rating to the Russ & Daughters Cafe, Joe DiStefano checks out Pye Boat Noodle, a new Thai spot in Astoria, the Pink Pig says Justin Hilbert's cooking at Blenheim is "Blue Hill lite" in a good way, Goodies First samples the insect-topped Mexican food at The Black Ant, and NY Journal managed to get to Après before it shuttered.
[Top photo: The Gander by Krieger]